I’ve seen a few threads post patch 2 suggesting that detail has been turned down in order to improve performance.

TL;DR - I see no difference, other than an improvement where trees were overgrowing things and where the post patch image appears to be slightly sharper in some cases.

This has generally been suggested as a bad thing because it penalises those with better hardware/systems and takes away from the sims clear winning visuals. There is some mention of LOD slider being changed (so that 100 before is now equivalent to 50 etc).

i have no idea if any of that is true. What I do know is that post patch 2 my experience has been smoother and the whole sim has felt more robust. As it happens I’ve been flying the TBM which, more by luck than judgement, seem to be one of the more stable aircraft and doesn’t seem to have quite as many issues as some others.

However, in order to objectively assess whether the detail has or hasn’t been turned down, I decided to try to recreate a few screenshots from before the patch. Unfortunately this isn’t as easy as you might think as the weather/lighting etc can make the screenshots look quite different. However, I’ve had a go and you can judge for yourselves.

First off, here are my settings (Ultra everything with maxed out LODs, ground vehicles and shadows): 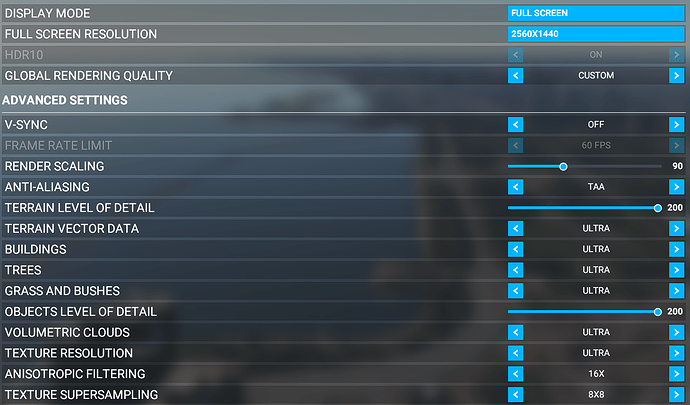 As you can see from the screenshots, I’m getting 40+ FPS most places, although the numbers are artifically high as these screenshots were taken using SET PAUSE ON (NEVER use active pause!!) which obviously boosts the FPS as the plane isn’t moving

Comparison 1 - near Reykjavik, Iceland
I really struggled to get the lighting the same on this one. However, see what you think. 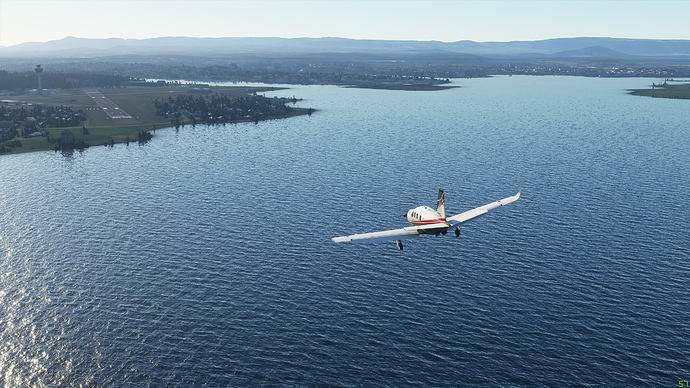 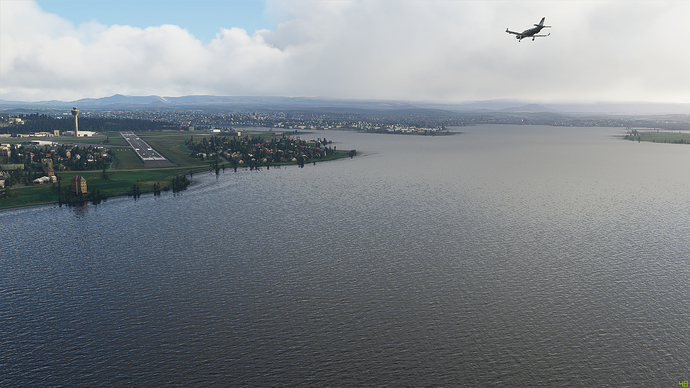 I struggle to see a lot of difference. Look at the far away shoreline. TBH hard to tell if this is down to the lighting more than anything else.
Pre patch: 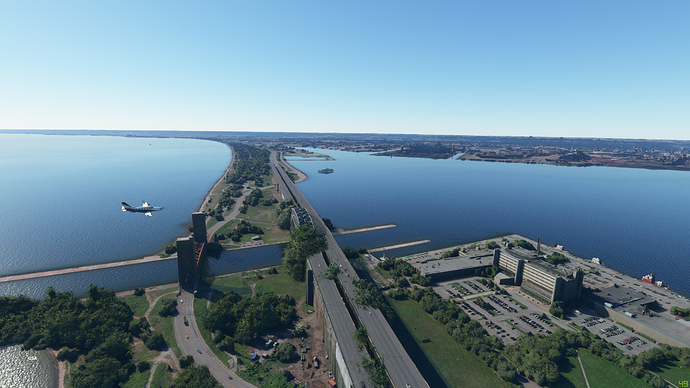 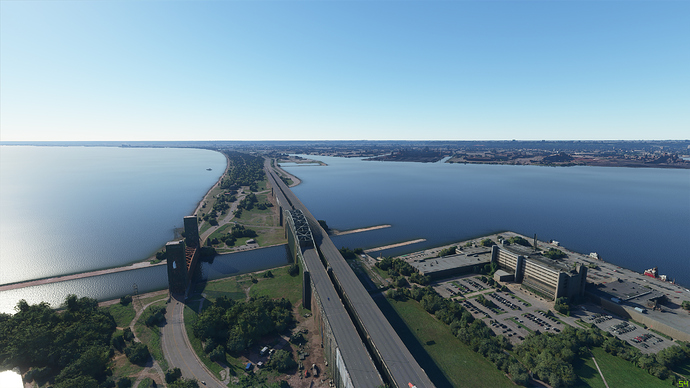 Note that this is a PG area - and the quality is immense, both before and after. But what I DO notice is that the trees in the pre patch picture that overlap the road/bridge have gone. Also, to my eye, this hasn’t been a general killing of trees as the other trees in the screenshots look pretty much the same. See the changes here: 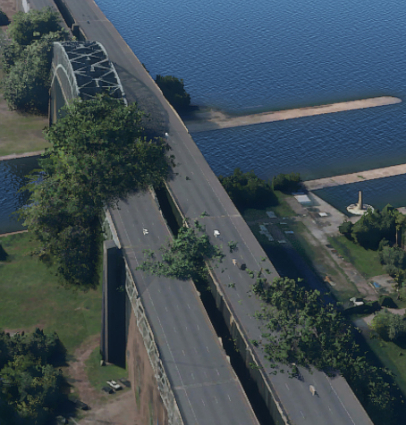 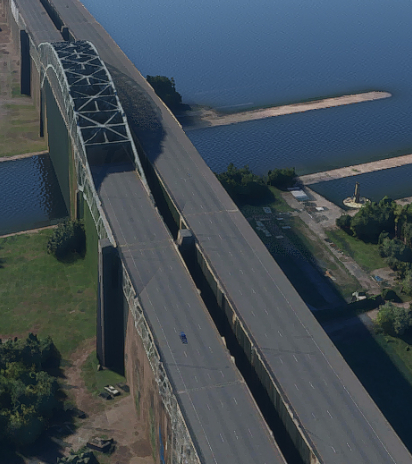 So this loks much better.

These look identical to me 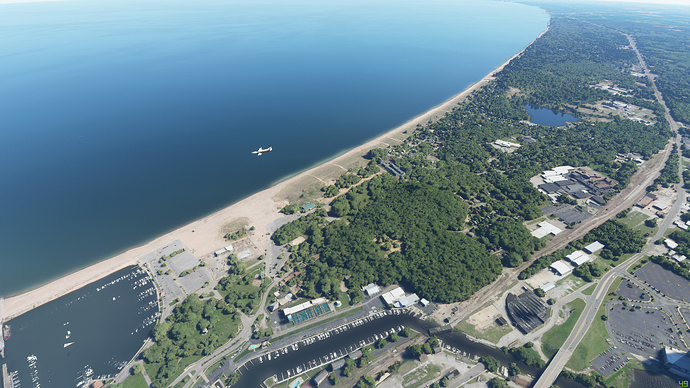 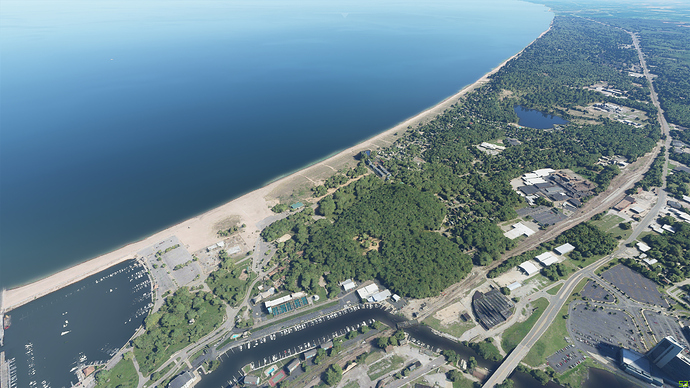 Near identical as far as I can tell. Looking way off into the distance shows this: 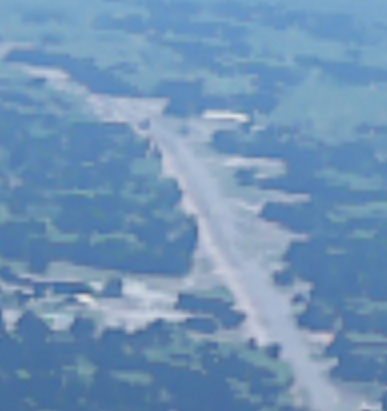 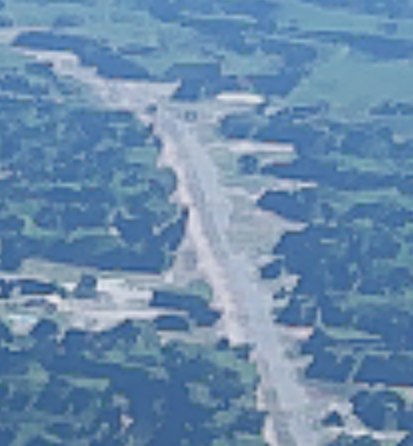 I don’t see any material difference here at all - if anything, post patch is slightly sharper 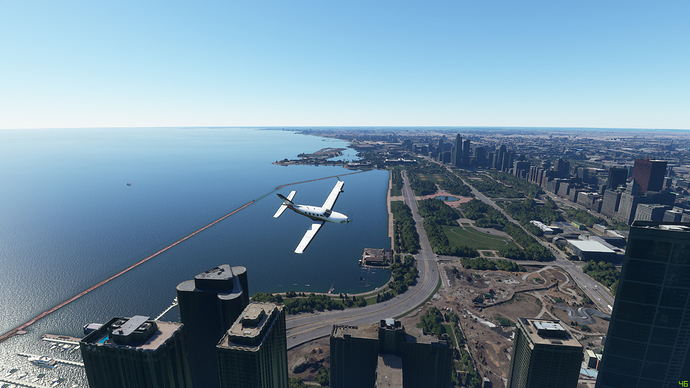 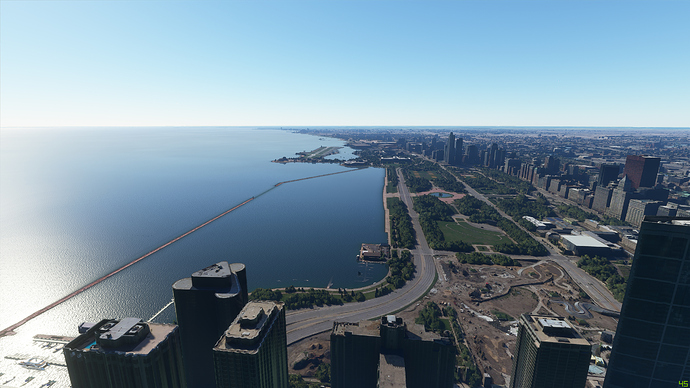 Again, near identical as far as I can see. Looking more closely at the distance 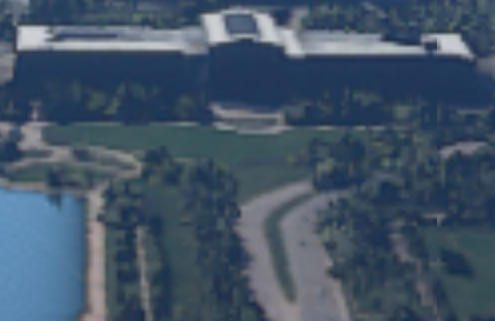 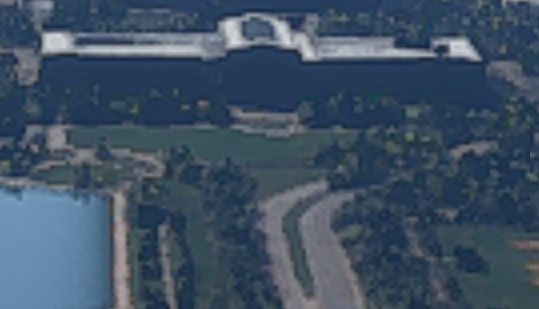 Again, maybe the post patch one is slightly sharper

So, just to confirm that I don’t believe I have changed my settings at all pre and post, and the images I show as pre were taken on the dates shown. I have updated the nVidia drivers to the latest verison (456.38) - which may account for the apparent sharpening.

You can check my blog here where you will see these screenshots and more taken since launch:

INTRODUCTION Hi all. Having reached Leg 52 of my travels, I thought I should put a little intro here for those who may be coming to this thread new. First off, I am new to flight simming - I have tried xplane, but never really got into it. The visuals of MSFS attracted me, and here we are. As this is a sim, there isn’t progression or missions etc to provide clear focus on achieving goals, so I decided that it would make my flying more enjoyable if I did have a purpose or aim to it. So I decide…

In conclusion, I see no difference, other than an improvement where trees were overgrowing things and where the post patch image appears to be slightly sharper in some cases.

Happy for others to do a similar comparison and see if we have the same results.

Thanks for the comparison. It confirms my experiences. But in my area in northern Germany there are definitely fewer trees. I like it better now. It looks more natural.

But how do you get such ground textures with Bing Data World Graphics turned off? Did you accidentally click on them while making the screenshot.

Edit: I must also say that I have reset the settings in each section under Options (Graphic, Camera, Sound, etc.) at the bottom of each page, reset everything again and restarted FS2020. I also deleted the rolling cache in the explorer and recreated it in the options, so that everything is clean again.

Hi Gordon I have to say I agree completely.

I posted a few days into the patch having done several flights that I didn’t really see any drop off in quality. The sim is smoother slightly but moving glass cockpit refresh back to high (you kind of have to do that) lessons the improvement slightly.

I hope they continue to work on performance and to maximise CPU usage in particular. I wonder if and when we’ll hear about a possible port to DX12. Xbox One supports DX12 now so there’s no excuse.

Ooops! That’s a funny one. I must have clicked that accidentally taking the screenshot of the settings. I definitely! use Bing Data. I will update the screenshot in my post! Thanks for spotting that.

I too like the less aggressive forests. I played around with the tree-fix solution offered in these forums but found it to be a little blunt. I like what Asobo have done here. I actually wonder is some of the people calling out a big loss of trees still have the tree-fix patch in place and it is reducing the tree sizes from the already reduced trees in patch 2 - that might explain something!

In any case, otherwise the pictures would not look like this.

Correct - I have fixed this. An error in my original post - I must have accidentally turned it off whilst taking the screenshot. Apologies for the confusion. Just as proof, here is my data usage…

If DX12, then please select DX11 and DX12 with switch. The older processors don’t benefit that much from DX12. I think it is also not quickly converted and takes longer.

Yeah I also didn’t notice much difference in terms of visual, definitely less trees but that we wanted, isn’t?
The LOD issue has been there even before the patch, for example the autogen draw distance

And the water also needs some work. The swell does not match the wind speeds. You can usually derive the wind speed from the wave motion. The swell at 20 kts wind is definitely too weak. There is a useful list on the internet.

Edit: This is what I meant …

The Beaufort scale is a scale for measuring wind speeds. It is based on observation rather than accurate measurement. It is the most widely used system to measure wind speed today. The scale was developed in 1805 by Francis Beaufort, an officer of the Royal Navy and first officially used by HMS Beagle. There are twelve levels, plus 0 for "no wind". From 1946 to 1970, there were also beaufort levels 13 to 17. All of them were labelled as Hurricane. Because they were only used in special cases, th...

At 20 kts light foam should already be visible. Now the water is too calm at 20 kts. This was better before the patch2.

The water though! The water is so flat now! Everything else in the patch has worked well for me personally, but the water is a backwards step.

Absolutely, but for me this is not so important for the time being. More important are the heavy bugs of the planes. Apart from the water I am otherwise satisfied with the optics so far.

I tend to agree. To create these new shots I had to increase the wind speed, but I don’t know what the original wind does was with the first shot, so don’t know how much higher I’ve had to set the wind this time if at all.

No idea when I might actually get it, but I’m hoping that will get me 60+ FPS at 2k. DX-12 on that would be awesome

So did you win your war against the bots, I’ve heard companies are using bots to buy bulk, so that leaves the rest of us with no chance! I’ve seen mixed reviews of the 3080 in MSFS, some show 25% improvement, some less. I do feel these differences will get better overtime though as CPU becomes more optimised to deliver to the GPU, I think DX12 will have a big impact for RTX 3000 users if you have a decent CPU.

I think the only reason why you are not seeing downgrade in your pics is because you are only comparing photogrametry (buildings and trees) and autogen buildings.

The biggest impact in the downgrade is in autogen vegetation (trees). Now, drawing distance is shorter AND with a decreased density at said distance over the already dramatically downgrade they made since the beta with respect to the alphas. Take a look at saba island, it look awful unless a few hundreds meters from it. Not the case in old alphas.

I tried to get the founders edition - ha ha ha. Anyway, managed to pre-order on Overclockers in the UK later in the day. Confirmed and in the queue but I fear weeks or even months of wait. I need an EVGA card (or FE) because I have a relatively small case and most cards are too big. EVGA is the only card I’ve seen less than 290mm long. 20% to 25% gain is what I’m seeing online, but with the i9, I’m hoping the new card will give the i9 more room to do it’s stuff. It sits twiddling it’s thumbd at about 30-40% usage right now, the the 2080 super running flat out!

Nope, disagree. These shots are both PG and non PG. See the zoomed in views of the vegetation. Not an issue here. There is no way that a random bit of island off the coast of Iceland is PG. I have Saba pics - will check if they are before/after patch 2 and share them.

Thank you for the screenshots, it’s been my experience as well. That tree on the bridge was funny as heck, glad it got fixed!

I think there were some tweaks to the shader that made the overall look of patch 2 feels more vivid, accentuating the sharpness, especially under bright sunlight. I prefer a more washed look but honestly there are many pressing issues right now (like the simulation aspect of Flight Simulator), so I don’t really mind.

Thanks - you colud try the nVidia freestyle if you have an nVidia card to tone down the vividness of the colours if you want. I can’t get the settings to save though, which I think is a bug in nVidia GeForce Experience (and not the sim, ironically!)

Excellent Comparisons, nice work. As I suspected, it’s the same, but actually improved.