Push Back for GA Aircraft

I fly exclusively GA and VFR and my ‘Go To’ aircraft are the XCub and Savage Cub, starting mostly from the smaller airfields throughout the UK (eg EGCK, EGEO, EGPI, EGPS, EGSV). I much prefer to start on the ramp or parking slot, run through the checklists, taxi and get airborne. However, I am becoming thoroughly fed up of selecting a start position and finding myself in an aircraft that is about 10ft away from a building and pointing straight at it. It is fairly frequently so close that I can’t turn out of the spot without colliding with the building and getting dumped out of my flight. There is never, at least consistently, the option for a push (pull – taildragger) back, although that did show up as an option at Oban yesterday and there was a guy there with his donkey. I have just tried Oban again with both XCub and Savage Cub, starting from the same spot; with the XCub there was a marshaller but no donkey and with the Savage Cub the ground crew were still in the crewroom. There was no ATC option for a push back and attempts to taxi out were, in both instances – fatal.

The phenomenon is not exclusive to Oban or indeed confined to the UK, I have experienced similar in New Zealand and Canada. Is this just one of those glitchy things that we have to get used to for the time being or is there a way around this?

The shortcut für pushback is Shift+P by default. I think it should work.

Having a small electric tug instead of the large ones for airliners would be a nice touch while we are at it.

They are going to improve the airports, I believe that is what this “Airport Gateway” Asobo has been talikg about is for.

Until (or if?) that gets done, you can use this utility to move your aircraft position.

Get yourself a good third party Planning Software like LittleNavMap. The layout diagrams for when you zoom in to set a departure field are a lot more detailed than the MS Planner, and you see all the ramp parking spots in relation to major building structures. Set your start point to one of those and you can easily pick a ramp spot that lets you get onto the taxiways without having to request a pushback. LNM also lets you build realistic VFR/IFR plans compared to MS Planner easily and more instinctively.

The shortcut für pushback is Shift+P

I have the slew mode keybound to my yoke at the moment so I can move into any position I like, even if it is just for turning the aircraft round, not realistic I know, but it may help if you are struggling a little, this is where the saved flight function needs to work properly, I used to save my flight positions on every aircraft I had and just load up the saved flight.

Or in old RAF parlance - a donkey

Thanks for the pointer; I currently use Plan G so I will give that idea a try. I suspect that, even if the system in the sim was consistent and the option to request push back was there on every occasion, it might not work with a tail dragger. A2A have conquered this issue in a very simple way

Is it the wrong shortcut? It works for me?

To be fair I haven’t tried Shift+P. I was under the impression that push back wasn’t operative unless it was requested via ATC.

I had a very quick look at Plan G earlier and that doesn’t appear to define parking spots, at least on the smaller airfields. I will have a more in depth look this evening but it might be that LittleNavMaps is the answer. I will also get my head around slew mode, a function that I have never used.

Thanks for the help evryone.

If the airport has parking spots, Little Nav Map will depict them. If they’re rough strips or flying club type fields, it will only show topo details like where you would expect the clubhouse and “grass ramp” would be, but you can’t start from there.

Shift+P is your friend in those cases. We shouldn’t have to do this, but unfortunately it’s the reality in many airports. You start a couple of feet away from a building, so you have no choice but to use pushback. I try very hard to select a ramp spot that’s as far from buildings as possible to just avoid this altogether. ALthough from the world map, that’s not readily apparent since buildings aren’t shown. The best is to use the 10-9 chart separately before selecting a spot at an unknown airport.

Happens often with Community work and freeware, the .bgl file comes with a wrong Start direction or location within an airport. Choose a different runway (if any) else you are fried… Last week I downloaded a Chilean add-in for an airport on Robinson Crusoe Island …

The addon put my Goose too close to a fence, I could not turn it in any way, I removed it

I think I have discovered where my problem with Plan G lies. I am still using V3.2, which works but will not create an MSFS Database. The solution is to download V4 which is fully aligned - allegedly

Thanks for all the tips folks. 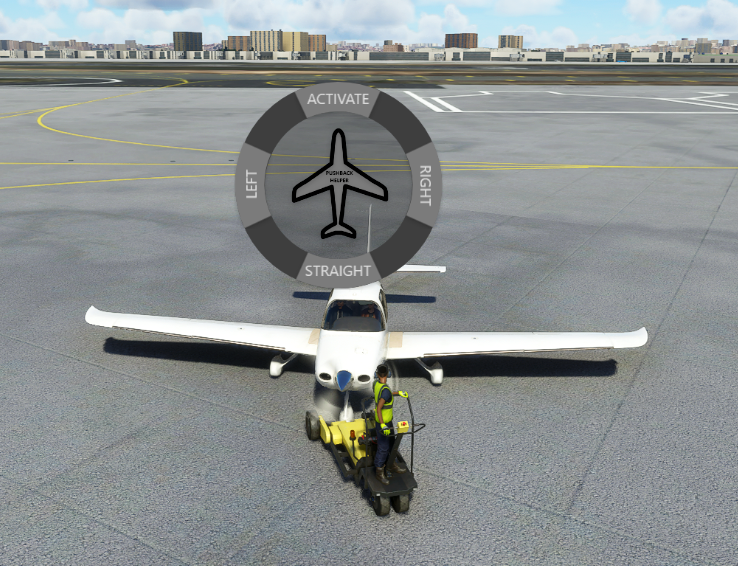 ✓ Pushback Helper is a Microsoft Flight Simulator 2020 mod created by metindikbas. Download for free to enhance your experience in MSFS 2020.

Hopefully at some point, there will be something similar to Lee Swordy’s AFCAD tool (and other versions) which willmake modifying airports simple. At pretty much all UK strips and small airfields IRL, push backs aren’t required as the parking spots are designed so the aircraft can taxy forward on to the taxiway.

I’d hate to see how many groundcrew they go through as the pushback driver (not sure of right term) keeps on driving though my prop (assuming aiming for the middle of the plane rather than the landing gear)?

There is ADE (Airport Design Editor) which has been used for FS9, FSX and now MSFS