Now we have update 7 and all my settings for my joysticks and game have been buggered up lost, what a waist of time setting them up when they are wiped out with a update.
I do not have all this time to mess setting things up again WHY HO WHY.

If you do a search on your PC for ‘inputprofile’ once you’ve got them set the way you like and back them up somewhere safe, should help if they get wiped.

Not sure where the other preference settings are saved but if you find those maybe set them to read-only?

Huh? I did a complete PC format and reinstall and update and all my settings where still there??

That’s because the settings are saved in the cloud I presume.

Yes they’re saved online. What I’m suggesting is back them up and if they get reset you can replace them.

I fly since the first day fs2020 came out. But I never thought after an update to loosing my interest in this game, exept for now!
How they can push out such a update with full of lacks and errors??? For a flying enthousiast this Sim is not usable anymore!
I tried every plane I have and I found some critical errors with almost every model!
CJ4 with white screens, C208 cannot use GPS programming, FBW320 only with stable version flyable, TBM930 starter knob broke, vr menu broke, well I mean I only fly in VR, so this sim is useless at this time…
No relaxing after work with this sim…if I get 20min. flight a day, I’m already happy.
And I paid more than 1k (better GPU, Joysitcks, add-ons) only for this game…

1 week after release of SU7 and no fix around, even not for a crucial error like the vr menu…

Game of the year…off course!

They mess all stuff up, this time trackir too.
One time i had to completely reinstall the game cause all settings where lost.
Then they suddenly half the view distance and so on.
Bugs over bugs…

Why? They don’t test Patches too much and release too fast or have to menpower.

Don’t make updates mandatory. Let us decide if we Beta test the updates. Stop all online functionality if you have to when we don’t update, but Satz least we can play and don’t have to wait for fixes that come or not

I have literally experienced none of these things. Your setup is the one that’s broken, not the game.

Asobo is destroying the game. There are many of us who at first had a great illusion, but as updates appear, it gets worse and worse. Currently after update 7 it takes forever in my case to load. When the load starts, it disconnects from the Internet and after a while it reconnects. During a flight, it is also continuously disconnected. Among many other things. Thus it is impossible to play. I have been playing Flight Simulator for over 25 years and have never had as many problems as now. What can we do, the long-suffering users? And the truth is that if it worked well, the game is spectacular. I will hope that my problems will be solved soon.
Thanks for listening to me.

This is why I always assume that every Sim Update there will be a lot of overhaul here and there. So the first hour or two after I got my update is to manually reset everything that I’ve ever configured in the sim. This includes manually deleting all my control profiles, brining everything back to factory default setting. Then go throug the whole settings and configure them accordingly again.

I only spend an hour or two to do this, and I end up having a good experience afterwards. That’s because I know updates always changes things, and I don’t want to spend 3 hours having a bad experience, then spending another 3 hours trying to fix things that I don’t understand. It’s better to just spare 2 hours of my time in the beginning resetting and reconfigure everything to give me a better experience.

Well, I guess Asobo are simply not up to the task of developing a flight simulator for a company like Microsoft. They might be good in general games (who knows) but here they are completely overstrained. To me it speaks volumes that they can’t fix what they broke for months and possible years. Most likely it’s simply a scheduling problem, too little time for too many tasks, but for the customer it’s just ridiculous. I tricked myself, I’ve learned from it what to expect of such projects in the future. Since SU7 I’ve found pleasure in DCS, where I can dive into systems and seriously learn them. No crashes except when you get shot down, amazing sim performance, no stutters, no serious bugs that spoil your enjoyment. And my peripherals simply work as intended. I wonder why.

Hate being a beta tester as well. On the verge of saying good bye.

Instead of posting nonsense, which planes cant you fly now with the most basic procedures?
I am interested because I can fly all.
And please, keep it polite.

" Since SU7 I’ve found pleasure in DCS, where I can dive into systems and seriously learn them. No crashes except when you get shot down, amazing sim performance, no stutters, no serious bugs that spoil your enjoyment. And my peripherals simply work as intended. I wonder why."

Interesting.
Here is a screen shot of just one page of performance bugs in DCS. 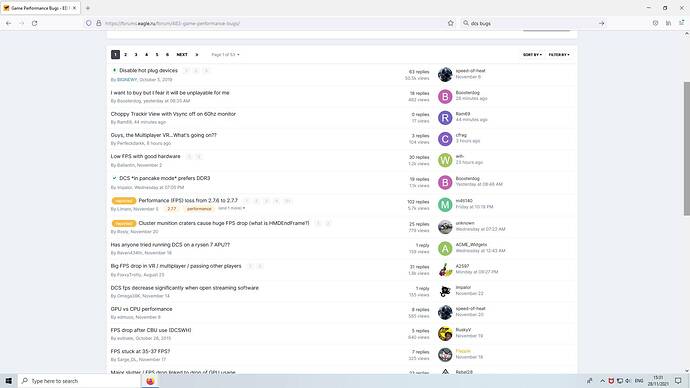 I know… That’s why I said none that spoils my enjoyment. Unfortunately almost every MSFS so far has ■■■■■■ me off massively and only the hotfixes after the updated made them enjoyable. And now we don’t even get a reply.

I only spend an hour or two to do this

I suspect you are not using an extensive cockpit?! xD

But yes, I often have to set up anew

At least I can help you with the white screens on the CJ4. Had exactly the same issue…
In your community folder you have a mod or a livery that is causing this error. In my case it was the “working-title-cj4” mod that was causing the white screens. But maybe not in your case. Doesn’t hurt to try.

Move all your cj4 liveries and mods outside the community folder and restart the game. You might also try to deinstall the cj4 aircraft inside the content manager and reinstalling it. This way you are sure the cfg files are reset.

Yeah its a shame about that bug. I really liked that improvement mod for the TBM but its broken now.