Does anyone know if they’ve found a work around to get RealSimGear buttons and switches to work? I know that MSFS doesn’t have popout mfd or pfds. Sitting here with my setup but cant use any of it lol.

Nothing has been said AFAIK about supporting this hardware. I wouldn’t hold out for a solution in the near term.

I have been in touch with Zach and Lisa from RSG and they ensure there will be a fix for this in the near future. Look for the Real Sim Gear newsletter. This is how they will push the updated information for FS2020 folks.

Awesome thank you for the response!

i have realsimgear too. I just read you can have pop outs. They said ALTGR and click the instrument. I haven’t tried it yet

That works! But is no fun without the knobs and buttons

Jarrod from RealSimGear here. With the screen pop out command, the screen content can be positioned on the RealSimGear unit no problem. The issue is the lack of any GPS commands in MSFS2020, they are not even avaialble for manual key bindings. We have tested with a beta version of the plugin and we can get radio requencies to work, along with most autopilot commands. The moment the GPS commands are added we will get these buttons working also.

Can we get access to this beta? We are (or at least I am) willing to test it, and being able to use the radio und autopilot would be a huge help from what we currently have.
If you have a support thread for it somewhere, we could test over different airplanes and scenarios and response times and so on… and give feedback

We have just made our beta available, see details below:

Even though it’s beta and functionality is missing, I am stoked that my G1000 is working! I just got it and I love it, I can’t wait to see nore features implemented. About 1/3 of all buttons work. I know some of that depends on MS/AS exposing the functions through simconnect, but if it improves on this, it will be worth the wait! 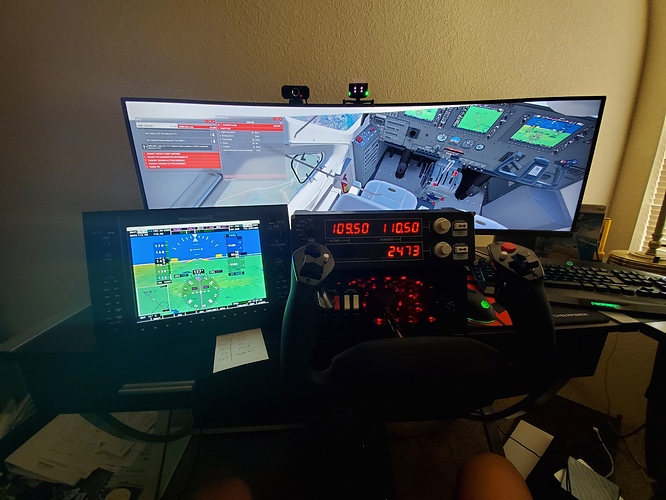 I agree. This is great and nice to have the first feeling of the game.

My only open topics (next to missing functionality, which has to be implemented by Asobo in the SDK first):

It’s off and on for me and I haven’t figured out the root cause, sometimes HDG is in 10⁰ and other times in 1⁰ increments. I got SLT to mive on 100 feet increments once, again no idea how. I may just spend an hour trying to see there are any consistencies.

the 172 gauge version has a 530 for those of us with it. this rsg beta gives me com1 but thats it for now. spadnext already covers all gauge cockpit instruments in fs2020. just waiting on the sdk to cover gps controls.

question for u guys with the rsg g1000. Do u have gps control?

question for u guys with the rsg g1000. Do u have gps control?

Unfortunately not. I have G1000 PFD, MFD and Radio Panel (Suite), but COM1, NAV1, HDG, CRS, COM1 Switch, NAV1 Switch, ALT and Audio-Buttons work, but nothing else so far.
I cant even switch from COM1 to COM2 or NAV1 to NAV2.

According to RSG its still an SDK problem and I really hope the SDK from next Thursdays will cover some ground on this.

I posted this Problem at Zendesk which was flagged as solved today, so i am very excited about the patch this thursday. Not because I have a RSG, but a touchscreen and a “Knobster” - if they now automate pop-outs, that would be great, but i think that’s too much to hope for in the moment. I actually forgot some buttons like Nav1-2 and Com 1-2, but I really hope they implemented them all.

Could you pelase fix the Simconnect Events?"

As an aside, Realsimgear added some additional functionality in their commandmapping.ini file for their workaround. It is found at Realsimgear FS2020 support.

This .ini file would have saved me hours of trying and searching for events.

Thanks for sharing, though.

I posted this Problem at Zendesk which was flagged as solved today, so i am very excited about the patch this thursday.

I learned today, that “solved” doesnt mean, that it is solved, but that it has been transferred to the development team and will be done. So it is more an “accepted”:

Thank you for submitting your report, we’ve added it to the Development Team’s Internal Bug Tracker!

In the meantime, we’ll submit this ticket as Solved and contact you if we need any additional Information!

OK, thanks for clarification. Let’s wait then.

We have just made our beta available, see details below:

I have the TBM package & there was nothing in the commandmapping.ini for the TBM Panel Switches. Just to let you know!