These are some of the screenshots I used in making my manual for the Camair 480 Twin Navion and a preview video I finished today. Visit my website for details - Be sure to use Discount code: Camair - for 33% off for the 1st week!
Website: HANGARSTUDIOS713

I pulled the trigger being a fan of Navions and I don’t regret it. The flight model feels similar to the Milviz’s 310 but a little more “floaty” which seems realistic being a lighter airframe. The engine sounds are that of the da62. The lightning was done excellently, the exterior lights are realistically bright making taxiing at night not such a pain. The interior lights are very satisfying, highly adjustable and you have 6 different lights to tweak. Some of the textures could use a little work but absolutely passable considering it was just released by a solo developer for $15. ($10 launch sale) Another criticism would be the lack of a functional sun visor. I’m glad to get any Navion in the sim especially a twin so thanks to developer for making it happen.

I’m really surprised at how quiet this release has been. I’ve been waiting to read and watch people’s thoughts on it, but everything has been fairly silent.

I know why it’s so quiet… Not much to find in a negative scope. I’ll just leave it at nothing is perfect, unless you look hard enough. All systems go they way they were intended. That’s the most important part, next you can break it down to model, then textures, and finally all the “extra’s” - I could of hmm’d and haw’d over what to include and what not to, but I went off of specific Navions and 1 of them wasn’t even a Twin ;-), but the main design is directly from a Twin on YouTube. Probably one of the very few left out in the wild. The video was so good I got almost all the interior design off of it too. Nose cargo was a bonus off of another Twin Navion all together. I thought how quirky can this old plane get…? Yeah there’s more, just head on over to my website and under the Camair 480 tab you can see a bit more info about the plane. I haven’t had one person tell me they didn’t like how it flies. That’s what matters the most, but I had help in that field from an owner/pilot of an original Ryan Navion with extensive testing to get it just right. I promise you for the $10 price tag on it now, it’s a steal and it can only get better

No, None. In the main model I based this off of it didn’t have any. Also this Camair 480 Twin Navion is custom. Much like it’s counterparts in the real world, there were no two the same. However I did add the ability to move the sun visors. I thought it was strange since the original Ryan Navion I had done had the MP gauge. One thing is for sure the Twin Navion is a very unique plane indeed. 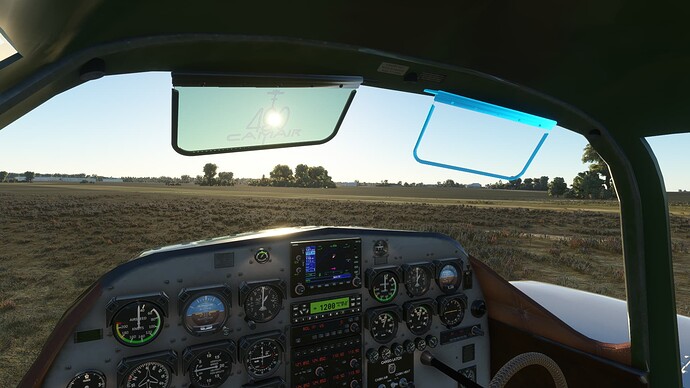 Visor Wish list1920×1080 157 KB
Here is a screenshot of the new Clickable Sun Visors - I added a bit of Camair 480 Flair to it as well @KludgySix830 It’s in the download now, No official update version, just re-download it. When there will be an update it will be to fix any problems - none as of day 3 that I have heard of yet

Wish you all the success with the Twin Navion, nice looking aircraft, must have been a lot of hard work, nice steam gauges.

Thanks for the explanation.

No problem, I’m glad you enjoy it! It was fun to build all the way around. Thanks for the kind words

Thanks for the question. My pleasure!

Flying up the east coast of Brazil currently. Truly has been a pleasure to fly. Side note I love the circuit breaker functionality. The little things really make this a blast. 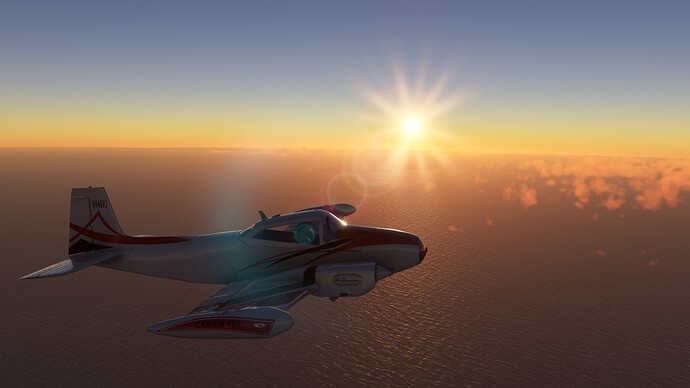 The FPS with this aircraft are not very good. I get about 10 FPS less in it than let’s say the stock Asobo CTSL.

What is good is the ingame checklist that is working more or less.

Noticed no sound change when opening canopy. canopy conly be opened on runway and is locked in flight.

If this gets further FPS optimisation and some better visuals I could recommend it.

It’s not a bad start. I mean the Islander had bad visuals also and now they are about to release an upgrade soon for it (other developer).

If the developer is dedicated to upgrading this aircraft further it would be good.

P.S.:
and please let me open the canopy while in flight ! I love to fy with open canpy. I don’t use any damag settings, so it should be possible.

I will have to ground the aircraft until the FPS are optimised and it becomes really usable.

It has potential however.

Check your e-mail, maybe I can help you out.
Kind regards,
B4Gunner

well how much FPS do you get with a similar aircraft ?

I flew the same route with the CTSL and the Breezer Sport and got mostly 30 FPS as to the Camair being between 10-15 FPS lower during that flight.