There’s a shocklingly good new freeware release over on Flightsim.to, the Wedell-Williams Model 44, a speedy little air racer that was a contemporary of the Gee Bee.

The author calls it “medium detail,” but it looks fantastic, and the flight model feels really good, with spot-on performance.

Most of the freeware planes available so far have been portovers of MSFS planes, or valiant attempts by people who’ve purchased 3D models and done some… creative… flight modeling for them. This one is solid, MSFS-native all through, and looks great inside and out. Definitely worth your time to download and check out if you like historic aircraft! 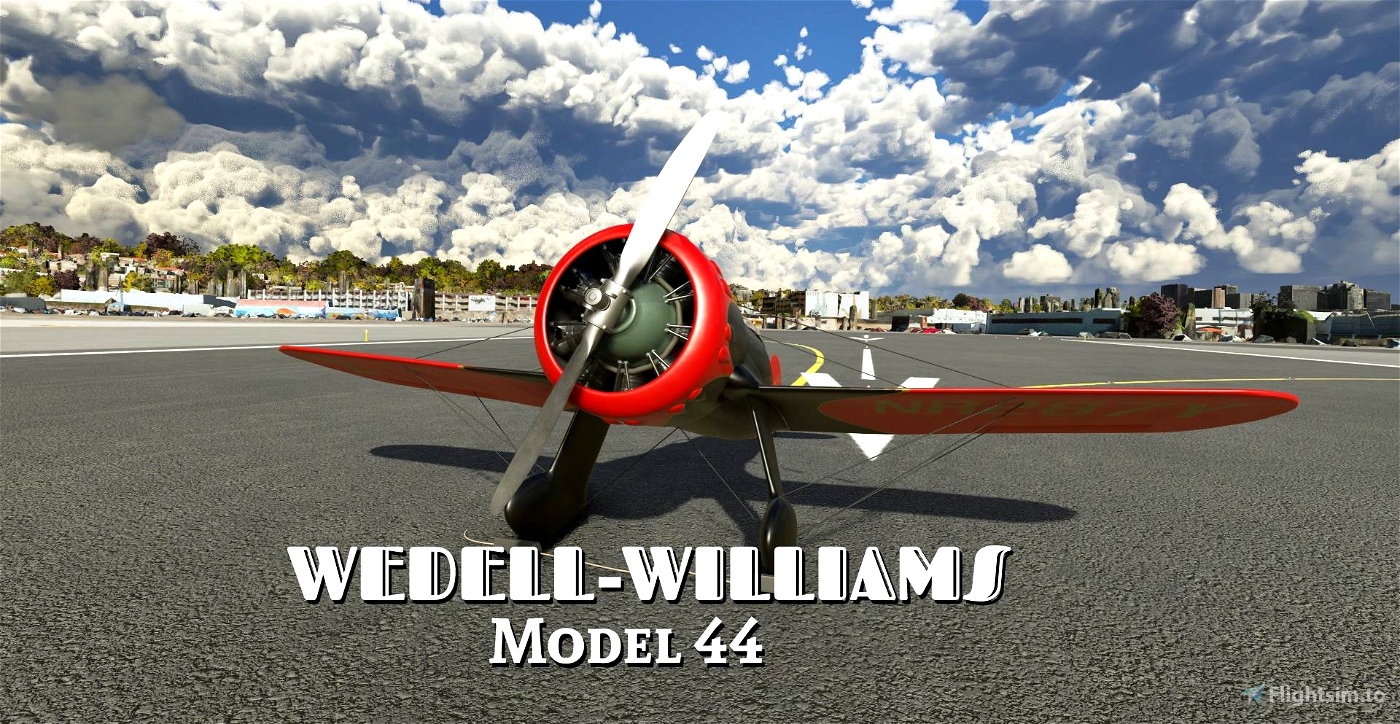 Not sure why this one is getting no chatter at all here.

I just gave it a spin. Some observations:

When I get back down to 100-150 knots I get more response. 200 knots and it takes an age to roll. Ailerons hardly move and Rudder doesn’t move at all at those speeds.

Nothing like the nippyness of the G3 Gee Bee!

It feels pretty nice and the 3D modelling is good but I’m not sure about those last 2 points?!

When I get back down to 100-150 knots I get more response. 200 knots and it takes an age to roll. Ailerons hardly move and Rudder doesn’t move at all at those speeds.

Yes, for planes of this era with manual controls (as opposed to later hydraulically assisted controls), this is actually accurate. The flight model here feels far more in line with what I’ve read about flying planes like this than the Gee Bee’s.

For instance, one of the most maneuverable fighters of WW2, the Zero, could barely turn at speeds above about 180 mph. That was one of the factors that helped Allied pilots come up with strategies to defeat the Zero, which could outmaneuver any of our planes at slower speeds.

So yep, most pre-1940-ish planes are difficult to maneuver at high speeds due to the aerodynamics of the designs and the strong control forces needed to literally move the cables connected directly to the control surfaces.

Yep, it’s a racer, and they were super-dangerous to land because they’re designed not to bleed speed, in addition to having horrible views. For the view issue, come in from the side and turn right as you reach the runway. This also helps bleed a little speed. You can also sideslip a bit, but it’s dangerous in these planes since stalls are so deadly.

Fun fact: Modern flaps were first patented by the Granville brothers for the Gee Bee, specifically because they’d not bleed speed and float over the runway:

"One problem which needed to be licked was the fact that both ships...would float when close to the ground"

Hi Editer,
Thanks for the info. I’ll definitely keep her installed and try to learn and adapt to her quirks!

For the view issue, come in from the side and turn right as you reach the runway.

Yea this is the same technique as I use in the Spitfire and I did last night with this but it’s harder compounded by the fact I was coming in a lot faster, couldn’t brake yet because I needed stick back pressure to stop the nose tipping forwards BUT was going too fast to apply the back pressure as she’d just take off again!

Basically due to the speed means you need to keep her straight for a lot longer whilst managing rudder, nose and brakes. A lot to do in those final moments but a good challenge!

Looking forward to my next trip now. Main task: “learn to bleed speed on approach”

I was just reading a post about the Gee Bee elsewhere and they mentioned that one Gee Bee pilot would sideslip in towards the runway, which both bled speed and also gave a view of the runway, and then straighten out just as he crossed the threshold and then use the edge of the runway off his wing to keep straight until he touched down. Then he’d keep the tail up so he could look over the nose.

Have to try that technique next time I’m in the sim!

Have to try that technique next time I’m in the sim!

Yea sounds good - me too. Will be finger-ballet on my Xbox controller!!

I had been working on this plane on and off for a long time and mainly for my own entertainment. When Got Friends started updating the Gee Bee R3 and I heard that Microsoft was releasing the Gee Bees, I figured I could whip this into shape since it fits the theme.

The flight model and engine configuration have a lot of work into them. I have some airfoil data and flight test numbers to work from. It’s tricky because these planes went through a lot of modifications over this short time.

A big part of the flight character is just from the sim’s flight model. If you take the time to provide accurate dimensions and parameters, a lot of this just comes out of the calculations. The controls getting stiffer with speed is one of those. As Editer mentions, at the time they did not yet discover all of the tricks modern designs use to avoid these problems.

As for approach speed, you have to plan early. Just throttle down and hold the plane level and it will slow down quite quickly. I find myself adding elevator trim almost continuously to keep the angle of attack high. You have to fight the urge to drop the nose to see around it.

Thanks for the feedback. You never know how something like this will go over. These planes are well known to scale and RC modelers but may not appeal to flight simulator pilots.

I should mention that a few of us are recreating the 1932 Bendix Trophy race where you can fly the Gee Bee R2 or the Model 44 from Burbank to Cleveland as fast as you can. The 1930s racers flew long distances races and then pylon racing in whichever city they arrived at.

To celebrate the release of the Gee Bee R2, the Virtual Air Racing Associationis organizing its first transcontinental event to relive the 1932 Bednix Trophy between Burbank (KBUR) and Cleveland (KCLE)!

This is a 2042 mile race for fun, in the footsteps of Gee Bee R2 and Lee Gehlbach, with a minimum of two mandatory stops (KAMA and KTIP) and who can be completed in multiple sessions between the april 30th and the May 14th. The event can be done with any aircraft with on…

Thats the way i do it. in VR no viewing probs as i look out the side of the cockpit on the runway…

Thanks for the feedback. You never know how something like this will go over. These planes are well known to scale and RC modelers but may not appeal to flight simulator pilots.

They appeal massively to me! Thanks for bringing this model to the sim. Not flown it myself yet as I’m waiting for a replacement joystick but it looks really well done and I can’t wait to give it a spin.

Outstanding effort sal1800 - the flight characteristics and the 3D model are quite good and I find the more I fly it, the more I want to fly it.

There are a lot of flight simulator pilots for whom this kind of stuff really appeals! The 1930s and 40s brought such creative and groundbreaking designs. I’m really pleased you did this, and you should be very proud that in many areas your freeware outdoes the commercial Gee Bees. (Though those are excellent too.) I’d love to see some of the other racers of the era, like the Supermarine floatplanes that inspired the Spitfire.

One thing you might want to take a look at is the sound on the version you uploaded. I’m thinking a file (sound.cfg?) might be missing in the distribution. There’s almost no engine sound in the cockpit (it’s almost all wind noise) and I’m thinking the wav files you’ve added on top of the stock audio aren’t being used. That’s the only issue I’ve found. I’m guessing your local copy might not be missing the file if you haven’t noticed this, but I’d suggest testing the download and what I’m talking about should be obvious. I’ve seen other folks comment on the audio as well.

I have seen the comments on the sound and will look into that further. The sound is probably the hardest part about MSFS development. I have been looking at the tutorials for building a WWise sound pack but it is very daunting.

I looked at some other planes that used this hybrid of WWise and WAV. I thought I could hear the custom WAV, but then again, I usually keep my engine sounds turned down quite low.

I still have fun flying this even after hours and hours of testing. I flew the second leg of the Bendix Trophy race last night. Three hours of hand flying using just the compass to stay on track. You start to get an appreciation for the fearless flyers of the time.

Nice model! Only the prop could be a bit more transparant for me.

A paintjob just for fun: 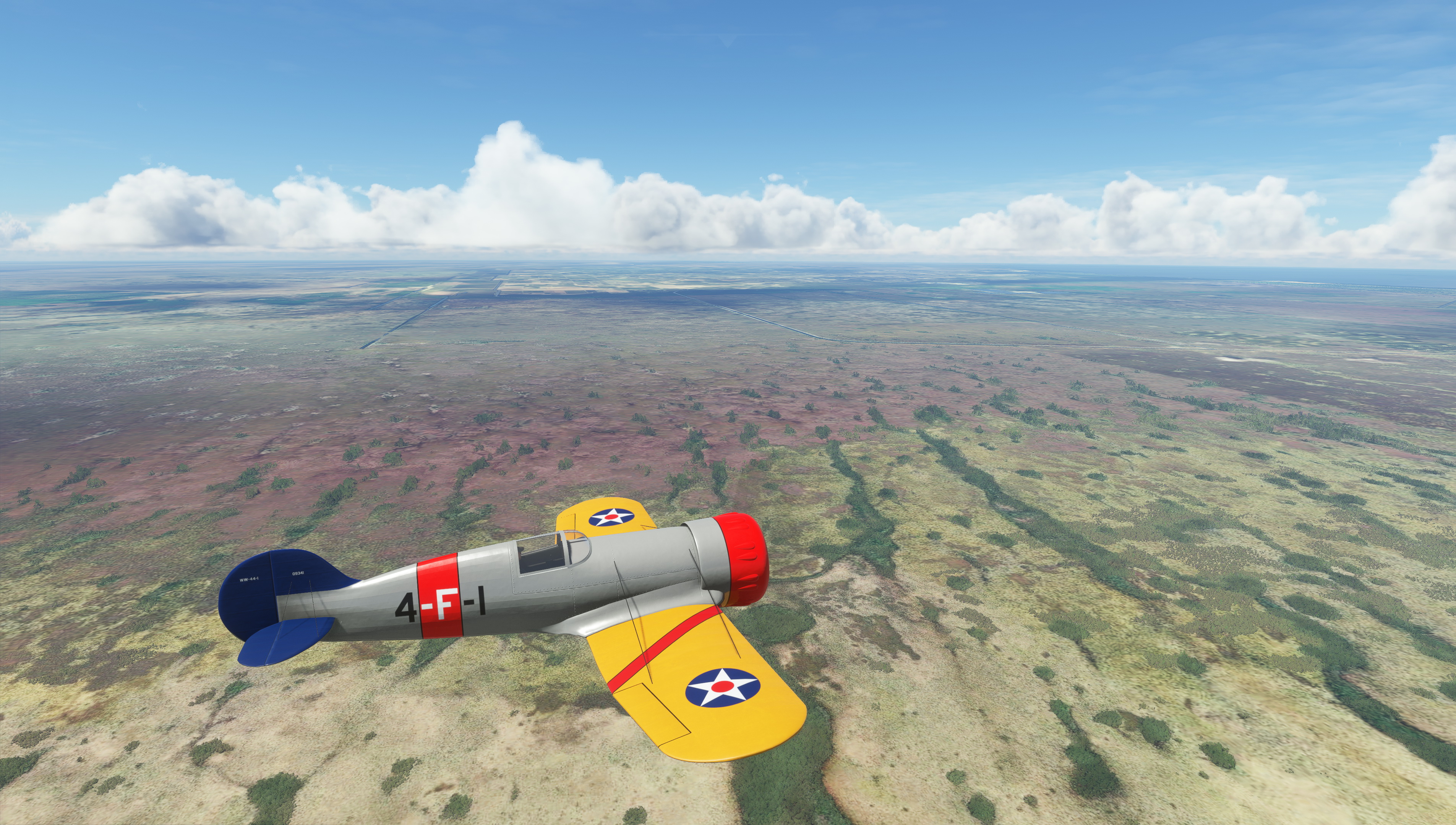 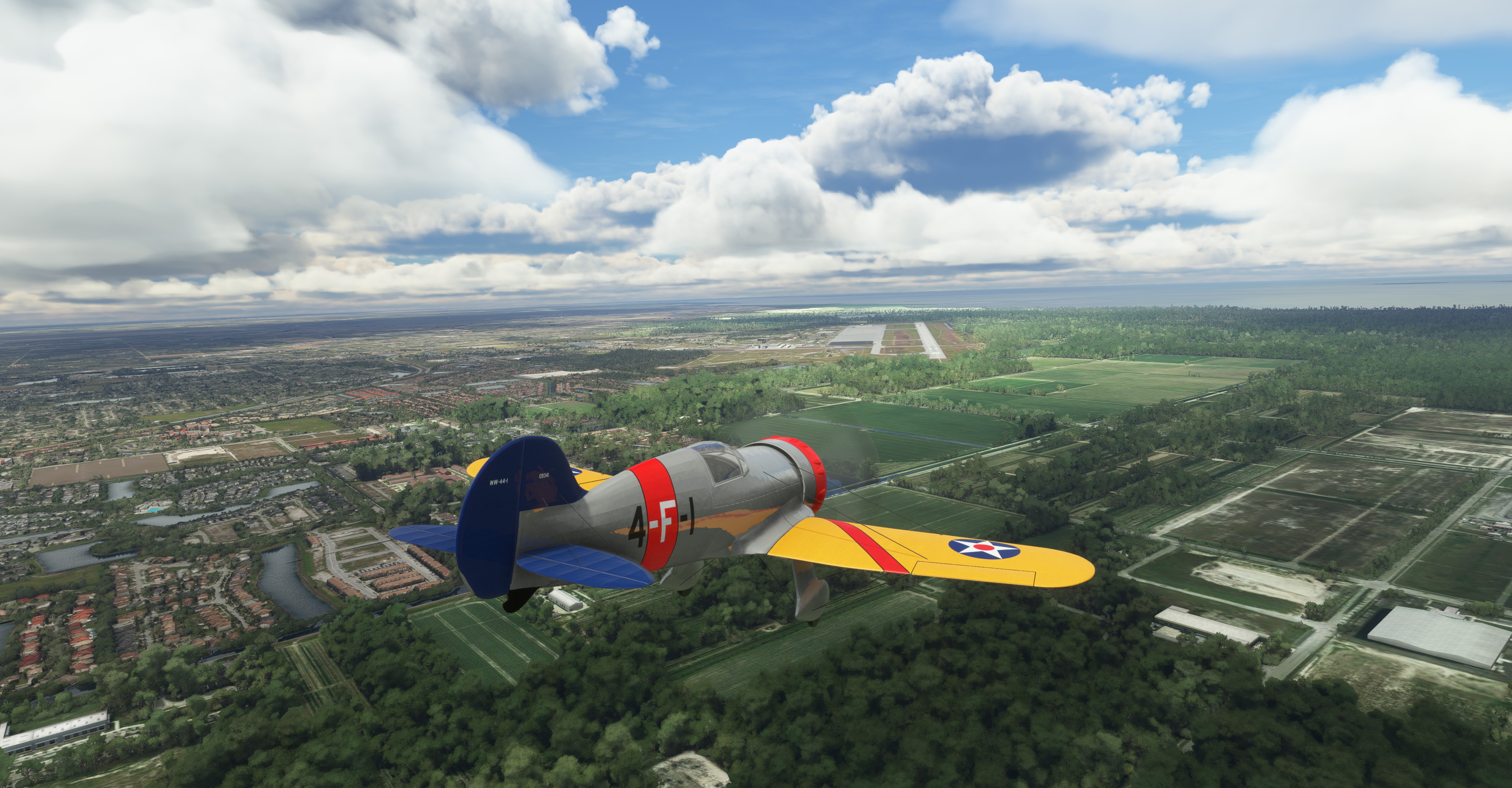 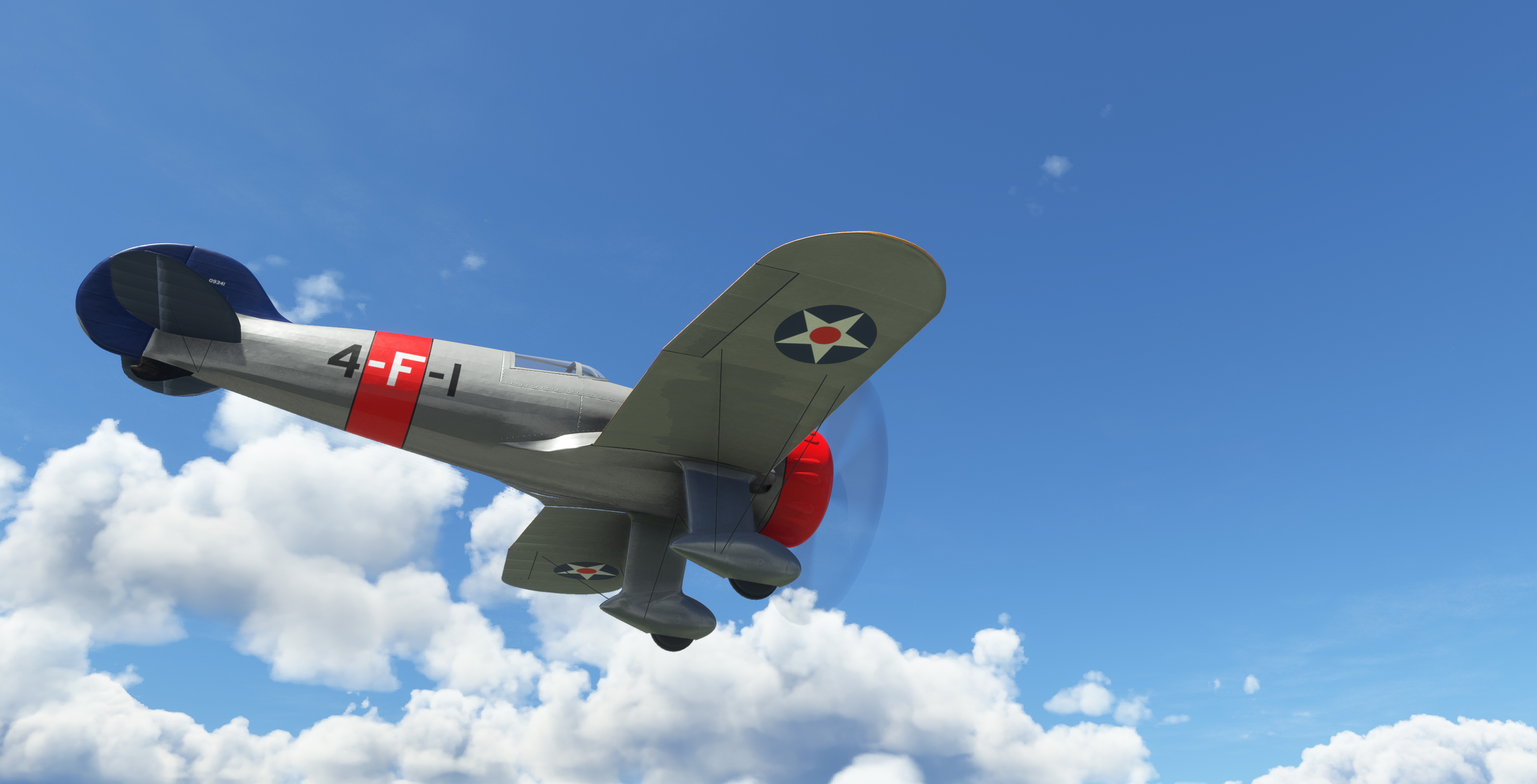 NICE !!
thank you for making that repaint for the type 44
JanKees

Bendix course and airfields for 30’s era race planes would be most welcome for sure.

As you can see I have a soft spot for Roscoe Turner’s Gilmore plane…as well as a few other Thompson racers. 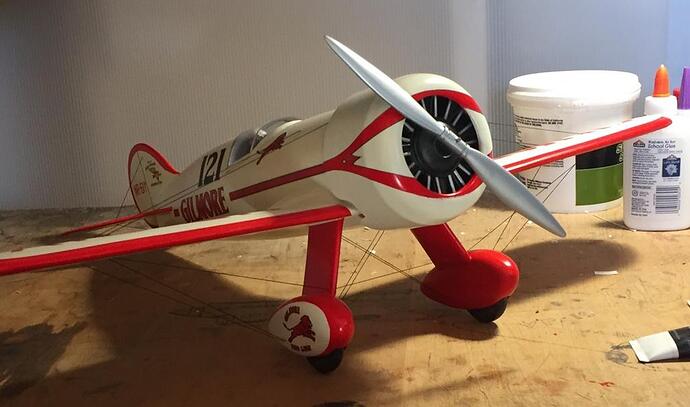 Well I practiced for a couple of hours today - just landings. If I crashed I’d Slew away again and keep retrying.

I still need a LOT of runway to stop in time

Finally got the hang of it a bit - helped by finding a more open and longer runway (first attempts were stupidly at St. Barts!). Princess Juliana was a lot better choice lol. Still hard work! Didn’t manage to come in with slip reliably but was getting to just above stall speed at threshold quite consistently.

Even so, only managed two semi-successful landings in 2 hours

3 if we count great landing spoilt by nose tip just before I came to a halt (should have come off the brakes!).

@Sal1800 if you’re really into the 30’s Cup racing planes is it possible you might try this one?

Jimmy Doolittle’s first attempt at the Thompson (blown engine) was in Matty Lairds Super Solution…
He won the Bendix in it and was supposed to switch to a different prop for the Thompson but arrived too closer to the start of the race leaving no time for the swap. 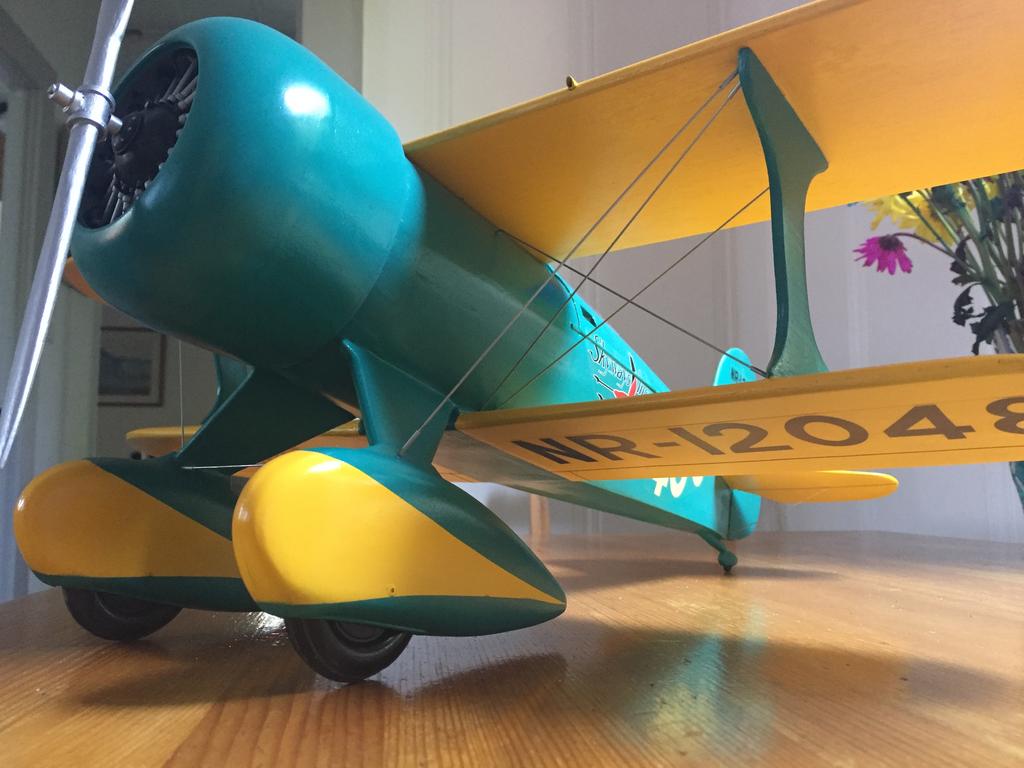 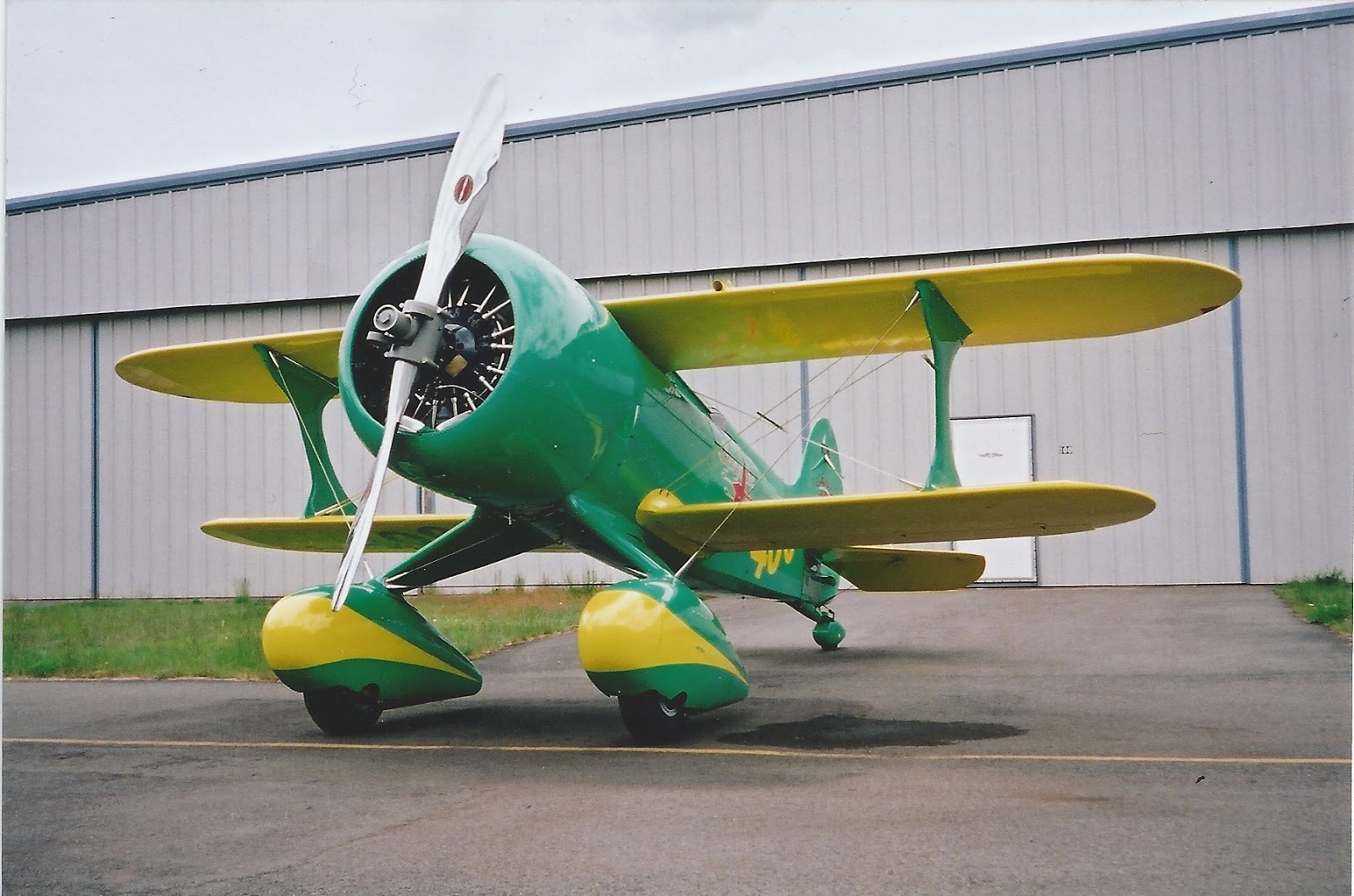 Loving the new paints from @pby5a! Beautiful job as always, Jan Kees! Obviously fictional, but it totally looks like something that might have been proposed to the USN in the early 30’s if they hadn’t been fixated on biplanes.

A tip for those of you who would like a temporary fix for the engine sounds: There are a couple of Vega 5 and 8 freeware models for FSX/P3D if you search for them. I believe they use the ‘Wasp’. Just take those sounds, including the sound.cfg, and paste them into the ‘sound’ folder. Then drop the layout.json on to ‘MSFSLayout Generator’ and then fly with a nice vintage radial sound.
Otherwise, Thank you for a really excellent plane.

PS I do hope you do not mind me posting the above suggestion. Your .wav files can also be incorporated with a bit of editing to the sound.cfg.