Hi
Can this white arrow on the top be removed? We all know the menu is up there. It only works to spoil videos or photos if you accidentally move the mouse.
Thanks a lot! 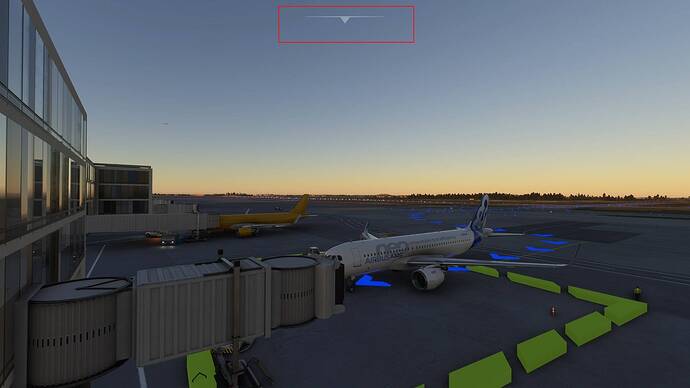 It would be nice to remove the top toolbar with a double Alt tap.

Simple: Just move the mouse away from it and it disappears after a couple seconds.

Yeah but I don’t want it on the screen at all. When I move the mouse to hit a button it appears, ruining my otherwise perfect video. I don’t know what makes them think I want the menu at the top the entire time I’m flying, I’ve been using this FS for 30+ years. In older FS you could hide the menu with double ALT tap.

Double Alt tap seems like a nice solution. I would also like to have this thing removable.

must be i only one with so weak nervous system, but this bar… i just don’t need it on my monitor, it can be opened by alt as was in fsx, by any other way, but not this way, please, guys, make this way optional, as i sure for most of people current menu is optimal if not very best, but for me it’s very annoying
thank you for best simulator for flight around the world, as i always say perspective of this stuff is incredible

I also would like an option to disable to toolbar from appearing, it severely interferes with immersion

Wish list? Is there such a thing? I hate to bother Zendesk with such a thing but to me it’s the number one killer of immersion in this sim, and that’s the white bar, arrow thing at the top of the screen.

I think before the sim was released we all saw at least one video to where we saw that there was a toolbar at the top of the screen. Why the constant reminder every time we as much as breathe on the mouse? There is no human being on the planet that will ever forget where the toolbar is after seeing it once, yet there’s no option to remove it. The escape menu is still all I use, but only if I must since I use keyboard shortcuts for ATC, checklists, etc.

Do real world pilots need to upgrade their cockpit to have an arrow to show them where they stowed their maps, charts, etc?

If I weren’t a night flyer, or a video creator I might not be bothered by it as much, but every time the mouse moves the slightest bit, that’s 5 seconds of waiting for it to go away. Something I can’t stand. It’s a major immersion killer for many of us and been looking for a wish list of sorts to post this but can’t find anything. I’ve been reading through the forum and will continue to look but if someone knows of one let me know please. From what I can see this forum is as the title says, and that’s self help only.

PS. Night flying on a 55" TV that white bar is a blinding 5" pupil dialter. I preordered the HP Reverb G2 but VR is going to be dreadful with that thing.

I thought there was a setting to disable it entirely don’t have the sim running to look at the moment. Or is it you still want it to function, but simply not become visible when you mouse the mouse?

Thanks for the reply, Blitzer. No setting that I’ve seen anywhere.
I personally don’t use it at all, so wouldn’t mind either way. I’m a PC simmer, so the escape menu is more than enough for me but maybe it’s more important for xbox folks. An option just to not have the white bar would be great because anyone that’s used it once (or seen one video of it) knows to simply move the mouse to the top of the screen for it.

A quick fix to eliminate the toolbar handle that appears whenever you move the mouse. To install simply unzip NoToolbarHandle.zip into your Community folder and restart the sim.

To access the toolbars move your mouse pointer to the top of the screen as usual.

Just be aware people… If an item in the menu is hidden, it cannot be opened via the keyboard shortcut!! I think thats a slight miscalculation on Asobos part!

So… make sure everything in that menu is turned on before applying this tweak!

PLEASE IGNORE THIS POST I AM NOT FULLY AWAKE

If an item in the menu is hidden, it cannot be opened via the keyboard shortcut!! I think thats a slight miscalculation on Asobos part!

How would you have done it?

Why does the menu visibility affect the keyboard shortcut?

I turned off all the thing in the menu hoping it would go away and think “I can still use the shortcuts” but it doesn’t work that way.

I would let the menu be hidden, but, leave the shortcuts working!
I just mention these things as a word of warning, once the patch is on you can’t see the menu to turn the sub components back on!

I see you know CSS, do you have any experience with JS?

I’ve been trying to remove the press start screen and have gotten somewhere but not quite the whole way!

The mod just hides the toolbar handle, not the whole toolbar. So functionality wise there is no change.

Yea sorry pal, Im not saying your mod does this… thats just how the sim behaves by default… for example if you turn off the vfr map in the toolbar, then hit V - nothing!

Oh god just ignore me pal, didnt see the bit about you have worked that out already lol… I NEED COFFEEE

If you found the code dealing with the Press Start Screen, point us in the right direction. Someone might fix it.

It’s extremely hacky so far, and all I’ve managed to do is get the “PressStart” screen to disappear but it doesn’t trigger the load

I’ll create a new topic for it.