Remove Xbox interface on PC and GPU not running at 100%

I’m running the latest version of FS2020 on PC and I have two questions:

Moved to #community:general-discussion-feedback as feedback was requested.

The answer to your first question, go into general setup screen, choose assistance about have the way down the screen you find an entry that says modern change that to legacy and it will be back to normal.

I dont have the game open so Im relying on my old man memory, but you’ll see it, its about half way down the page.

If your running win11 on a ryzen, you might want to run the latest patch,
win11 and ryzen arent getting along. If your not running win11 then I dont know…could be a million things.

I’m running Windows 10. Thanks for your reply, I will test your answer to my first question.

I hope i’ll get some useful tips for my 2nd question. I’m running the game on Ultra and when I have 100% utilization i’ll get like 30-40 fps.

Ya know, Ive had issues from time to time in the past where the gpu was doing nothing at all, DDU’s the driver and replaced it with the same driver and all of a sudden GPU was running 98-100%, you maybe try a fresh install of your drivers…

Less than 100% GPU utilisation usually means you are CPU bound.

Note, it is entirely possible to be CPU bound without your CPU utilisation being 100%, notably whenever a single core is at 100%.

MSFS is multithreaded but there are significant processes that take place on a single thread and if these take time your GPU will be stuck waiting.

I suggest you take a look at your per-core CPU utilisation.

I suggest you take a look at your per-core CPU utilisation.

This is always key. Unless you look at what individual threads are doing, overall CPU usage is pointless.

I did not have this problem months before. That’s why. My CPU utilization is like 20-30%. But this is overall I guess, so I have to look at individual threads?

Yes, you need to look at individual core utilisation.

You may not have had this problem before but the developers continually tweak LOD levels in the Sim and these impact CPU utilisation. SU6 is more CPU intensive than before due to them allowing more types of objects to be drawn further away (at exactly the same settings as before) and therefore people will see this as a decrease in performance with the same settings.

If you post a picture I will happily explain it to you. 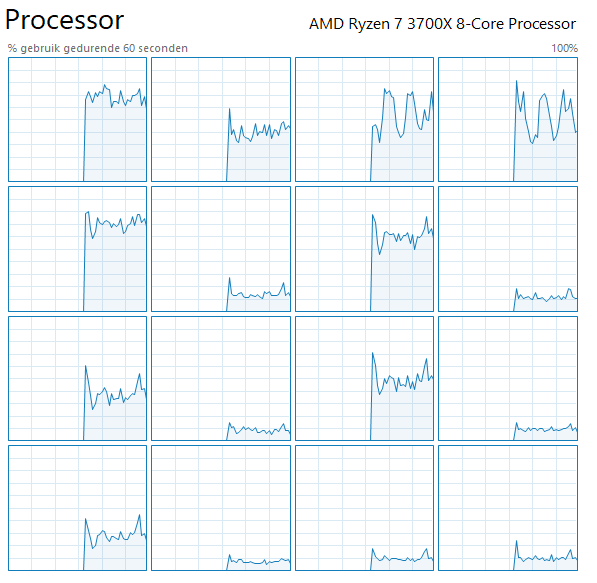 Ok, so you see how it says 8 core CPU in the corner? But you have 16 graphs? I don’t know how much you know about CPUs and threading but essentially your CPU has 8 cores, and each core can work on a thread, and queue another (so essentially your CPU can accept 16 threads of work).

Now you need to look at your chart from left to right, from the top and count graphs in pairs. Each pair corresponds to a single CPU core (so top left, and the one to its right) is your first CPU core.

Top left and the one to the left of it is another single CPU core. This one is a good example because you can clearly see the utilisation of this core see-saws between the two queues it has, notice how when one goes down in utilisation, the other goes up.

Now, the type operation determines how effectively this “core-splitting” works. Sometimes it is reccomended to disable hyperthreading or simultaneous multithreading (which are the actual names for this technology) because it causes some applications to perform worse (even though it appears as though you have more cores available!)

FS2020 does not effectively use this which is why you see what appears to be partial utilisation. It is in fact just ineffectively varying the threads between the queues on each core.

If you sum up the pairs you get a good idea of the utilisation of the core, which in your case suggests to me that you are indeed CPU limited and specifically individual core performance limited.

I hope my explanation was simple enough to understand and apologies if you understand the topic far better than I have assumed.

There seems to be a fundamental misunderstanding of GPU utilization here. Running at 4K resolution will typically result in a GPU bottleneck with the GPU running at 100% load - meaning your GPU is holding back performance. Anything below 4K, like 1080 or 1440, is typically bottlenecked at the CPU, or “limited by the main thread.” In this scenario, your GPU will likely be below 100% most of the time, as your processor cannot physically deliver the frames fast enough to your GPU.

Having your GPU run <100% isn’t usually a concern, it just means performance bottleneck lies somewhere else.

I too am running a 3800X and using available tools I can see that I am in fact processor bound at certain points. My GPU never really gets near 100%. After update 5 some GPU processing was offloaded top the processor. hence the change

@pillowbee @ncbartschi thanks for your replies! I understand. But what I don’t understand is that I played yesterday and I had no issues at all! Indeed utilization was not 100%, but FPS was like 35-40 at Ultra settings and render to 4K. Even when landing and in the air with a lot of clouds. So sometimes I have luck that everything works fine and I can fly for 4-5 hours without any problem. Sometimes the problem begins after 30 minutes and they don’t dissapear. I have to restart the game for this. In one case my FPS dropped to 5 and staid like that, no matter what.

@Paladin569 I understand, thanks.

Vote for it here so it gets prioritized higher: https://forums.flightsimulator.com/t/after-playing-a-few-hours-fps-drops-from-40-to-5fps

Thanks. That was a worst case scenario.

When the fps drops, it’s often like 15 fps and lagging a lot.

In my opinion my cpu is powerfull enough for this simulator.

If you have a sudden FPS drop then it is probably the same bug.

Like I said before, probably not my CPU or GPU since the game is running fine except some sessions.