I suggest the following RPM settings:
STREGA 3280
VOODOO 3300
Modified my controls for Reno Racing, with a key assigned to prop pitch (small steps) and mixture, including A button for “best mixture”.

Interesting! How did you come up with different values for Strega and Voodoo? Do you mind sharing your methodology? On the discord, we did some analysis as well using active pause and had the following two conclusions IIRC:

I tested using as criteria the speed in the end of the leg between flags 6 and 7.
Did it only with Voodoo and Strega, taking laps with different RPM settings.
My methodology is subject to errors, but I’ve tried in active pause too and didn’t get to a final conclusion 2285? 2310?
I also used the mixture with no conclusive findings, i have the feeling that consuming fuel in active pause is good for time trail.
Tried many different ways to eject fuel with no success but you can configure a button for “refuel” and start racing with 20% or less fuel onboard and keep refueling as it goes.
Anyway, my best performance was when i started with 45% fuel, with no refueling.
Did you try it?

I think this should be made default or at least be mentioned in the rules area to make it more fair.

I agree with the suggestion of making information about aircraft speed performance available to everyone.
Some of the registered records are much above the regular performance of the aircraft.
I believe that it is ok to play with some parameters (power lever, mixture, propeller pitch, trims, …) to achieve a better performance.
But this kind of adjustments must be available for everyone in order to improve the competition.
One of my intentions when opening this discussion was to publicize these possibilities, anyone who doesn’t have aeronautical culture or who doesn’t understand the configuration details cant get any closer to aircraft adequately adjusted.
Thank you for your participation!

Using above info on RPM settings ( didnt know we could adjust them in time trials) i reduced my T-6 time by 13 seconds on first run. Sadly it did not change my standing. Is this thing broke now ? Can you change RPM in the multi player race ?

Yes, you can change the RPM settings in the multiplayer race. It makes a big difference! Hope this helps!

Thank you, Now i know why i got whupped bad in a multi race

Using the RPM recommendation, you can fly closer to most of the people and will notice when your opponent doesn’t know about this adjusts.
Anyway, there is still something missing.
On time trials you can reduce your weight applying active pause before crossing the start line and waiting few minutes until the fue drops to 40% (or even less if you configure a key to refuel as you fly).
Using these tips my time is around the 50th in unlimited class.
Most of the top 10 are around 5 seconds faster than me, and it can be due to flying technics, but the two best times are more than 15 seconds ahead of me.
They should be using something different, maybe using more favorable winds???

What’s your personal best? I have one of those low times, I intend to make a video after SU8 release explaining everything you need to know to be fast. Happy to help you gain some time. PB is done on unmodified game version, standard time trial, no wind change, or anything of any sort.

My personal best, flying what I would expect is “standard” flying (but I have never actually flown any aircraft), is 7:50.983 which at the time was enough for number 10, should still be top 20 probably. Video of it can be found here for verification, no tricks in it, just RPM change and clean flying: 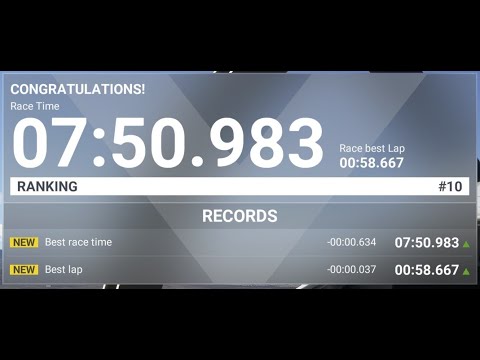 For the lower time I currently have on the leaderboard (7:49.224), it uses a weird flying technique where you basically pull as hard as possible in short spikes. This was discovered recently on discord. It works only in unlimited. 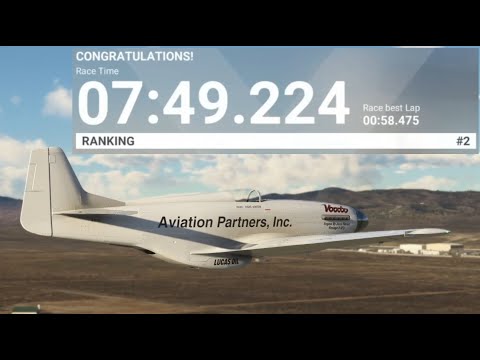 I know the 39 time uses a similar technique but with pitch trim involved as well. No idea how first place got their time (the 27). Basically it seems high Gs is not punished too badly as long as it’s short. Maintaining 4G to do a “smooth” turn is way more punishing in speed than doing a bunch of 9Gs.

Is it fair? That’s a real tough question if you ask me. I would assume this isn’t possible in the real aircraft (you’d break parts of the aircraft? pilot trouble from too much Gs?). So if you look at it from the point of view, you’d probably say that’s not fair. But then who’s to decide exactly when a flying technique/line passes the limit of fairness? And there are other unrealistic things in game, like full throttle the whole time. This would be engine breaking in real life as far as I’m aware.

The problem is the game allows it. Anyone can do it, it’s nothing fancy, the game is not modified at all, it’s only about how you move the stick.

An option would be for the community of racer to agree on what’s fair. That happens in some gaming communities, but:

I think the only real solution is for the game to remove any of these unwanted behaviors. Punish it with drag, whatever. Otherwise, as long as you’ve flown the course yourself, what the game allows is what’s fair. Making it easier to find how times are set would be nice, and reset the leaderboards once unwanted flying is fixed will be a must. Anything allowed by an unmodified game is fair otherwise.

At least until the game is stable we should just assume the leaderboards contain undiscovered, or little know flying tricks that help gain time. Again so far techniques have been publicly discussed.

We do intend to report this drag oddity in unlimited as a bug, allow MSFS to fix the issue if it is one. What do I know, I’m no pilot, maybe this is realistic?

Interesting the point on the fuel… but to be honest sounds a bit like cheating or at least using in-game bugs for advantage, when pausing the game to get a lower fuel stand.
Opens up the question why there isn’t any option to set your personal fuel amount…?

Don’t think fuel burn has been used successfully as an advantage before. Maybe you’ll find something though?

I agreed with you, feels like cheating.
When you pause, the aircraft starting speed is also greater than not pausing.
I don’t understand why the aircraft “spawns” with such high RPM and low speed.

My actual record is 7:54.568, best lap 00:59.005, in fact I’ve been trying to smooth my turns and only got worse performances.
I neve raced in real world, I’m a retired pilot who in my early years used to be a military flight instructor, the short pulls in the stick in opposition to a long turn in constant G, makes some sense.
I’ll try it, thank you.
Right now i have the 54th position in Unlimited time trails

You’ll want to target laps around 58.6-58.7 iirc if not using the hard-pulls method. I’d actually recommend to try and learn to be fast without it as well.

Common reasons for having slower times is:

Then it’s all about getting consistent. Hopefully with this advice and the videos you can figure it out. Low 7:52 total time is when you’ll start having to be super precise (but as you can see high 50 is possible with this, so good margin below 7:52)

Thanks a lot!
I’ll try it

A post was merged into an existing topic: How do you turn on the checkpoints/waypoints in the Reno racing?

A post was merged into an existing topic: How do you turn on the checkpoints/waypoints in the Reno racing?

Wow nice vid FMX1937 how do you get the gauges to appear on screen ?