Request to postpone the official release of SU10

I guess they will let us know on Thursdsy in the Dev QA and/or in the Dev update if we have to expect a disaster at 23rd or if they postpone the release or if they are able to fix it. Despite the awfull performance I am qiute happy with the release but performance wise its clearly a no go. But lets give them some time and hope for the best!

Isn’t it going to be released on the 28th? There is time for another beta if that were the case.

If we as testers liked performance better in beta 1 why can’t Asobo revert the beta back into that state? This is beta.

I feel i got better performance overall. Has not changed since beta 1 though.

But i see more users complain now than when beta 1 got released.

Perhaps because a straight switch back to beta 1 would result in performance regressions for Xbox simmers, for whom the current beta build is performing extremely well indeed.

This thread is a good example of what happens when we are missing feedback from the devs.

But we do get lots of feedback:

Oh you mean technical stuff. The stuff we really want to know about? Errmm…

Dev Q&A livestream this Thursday Aug 18 at 17:30 Zulu time … I think on Twitch under MSFSOfficial channel … at least I think it’s on Twitch, it’s not on the channel calendar, but all the previous ones were on Twitch. There is also an MSFSOfficial Youtube channel

[image] Screenshot by syokatunofu (Twitter) Thank you to all players who have been participating in the on-going Sim Update 10 public beta and sharing your feedback and bug reports with the developers. The team at Asobo remains hard at work on SU10, and we are currently preparing a new beta build to release to testers soon. If you have not yet seen the news, our next Developer Q&A livestream is coming up next week, on Thursday, August 18 at 1730Z. Unlike previous Dev Q&A sessions, this one wi…

It would be a disaster if the stable SU10 build doesn’t show the same kind of performance and stability we are now so much enjoying on Xbox.

I really, really hope they can improve the pc and meanwhile maintain the performance on Xbox.

If not, I think it’s then time to say goodbye. Another 3 months or so with performance and CTD hell like SU9, no thank you very much. Especially because I’m now very used to the kind of performance and stability the betas are providing me with.

Releasing the sim on a £250 console (in the case of the Series S), combined with making it available on a mainstream subscription service (Game Pass), has opened up the hobby we love to a huge pool of would-be simmers who might never have known the joy of flight sim had it remained the preserve of the relatively high-end PC user.

But this is where I raise an eyebrow.

The CPU on my system ALONE cost more than that, and even now, 2+ years later (which as you know is about 150 in computer years), is still only a little bit less. And that’s JUST the one chip. An i5-10600k, which was described at the time as “the best gaming chip on the market” or words to that effect.

No GPU (which even mid-range ones then and now cost double that console alone), no motherboard, no storage, no memory, no case, and on and on. And even then, my very high-end system (that was only a notch or two below the absolute best money could buy at the time) couldn’t run a complex airplane at a complex, handcrafted airport without it becoming an absolute slideshow.

Even today with an RTX3080 (and a high binned one that comes with a higher clock than the reference card), at the gate at KJFK in the PMDG 737-700, and after a ton of tweaking, I’m only getting about 25 fps.

Workable, but considering my system can run every other title I’ve thrown at it on absolute max settings, including ray tracing but without DLSS and get over 80fps (give or take it), I just have to question if a little $250 system can even come close to an acceptable user experience, or is more likely to turn people off than excite them.

So my perspective isn’t philosophical, nor do I hold any sort of grudge against consoles, or console players, heck I was one my entire life until a few years ago, my concern is technological.

It can’t outdo your PC, no console can. No console ever claims that and by and large no console user claims that either, that’s not what they are designed to do at all. The settings that MSFS runs at on the baby Xbox are not the same as you would have them on your PC. The one thing that consoles have going for them besides the price, is the fact that everything about them is a known quantity. The hardware and software are standardized and designed to work fluently with each other. The OS is very light weight compared to Windows so there is less overhead taking resources away from the game. Developers can optimise a game to run for that hardware way better and more efficiently than they can for PC, where there are endless amounts of configurations that could possibly pop up.

If you look at the graphical settings that MSFS runs at on baby Xbox, it’s clear the devs have set that distribution of the sim up to run within the capabilities of the console. Will it look as nice, and have the same FPS as your gaming rig? Definitely not. But then again, they don’t claim it will do that, only that it will run to the settings that they advertise that version of the sim to have. The same for the big Xbox, it also won’t run with the same settings as your gaming rig, but it will run within the designed parameters that the devs have set because they know exactly how that piece of hardware will behave.

Now, as to bringing in new simmers, I can’t see any reason that it won’t. The base version of the Sim is available free on Gamepass, that’s how I get it on my PC. It’s extremely attractive to me as someone that loves aircraft and wanted to get into simming. Especially given how expensive the sim is to buy locally. I imagine that almost all Xbox users will have Gamepass, and so it costs them nothing to try it out if they have any interest in it at all. Will all of the people who try it like that stay with it? Definitely not. But some will, because there are a lot of people that love aircraft and aviation, but maybe until this point haven’t been able to get into simming because of the high cost of gaming capable PC’s and expensive peripherals. As long as some of the people that try it on Gamepass hang around and put money into the ecosystem, or even if they don’t put money in but continue to use it as part of their Gamepass subscription, the sim being on Xbox is definitely a gateway into the larger sim community.

It’s really weird, because for the past few days my performance was top notch. I was able to push TLOD to 200 and above while flying to Innsbruck. Absolutely zero stutters. Nothing at all.

I have also noticed an almost absolute lack of live traffic. And multiplayer as well.
Could that be it?

With Jayne and others from the team announcing their participation at GamesCon the days after drop of SU10 I am 100% sure it will not be postponed.
They will not stand there with no new update to show.

If they demo it on PC, they’ll have lots of time to talk about it between the lags/stutters. This SU should not release. It has my vote.

It would be a disaster if pc players got stuck with SU10 in its current state. I hope they find a way to keep the current Xbox performance in the beta, without forcing a downgrade on many pc users.

Back to 90’s graphics

I call it a Game as well Jimfly. And nothing is wrong with that. I love MSFS2020.
However MSFS has
Birds
Racing
Spaceships
Boats/Ships
Cars
Top Gun
Captain Sim
Beautiful scenery Airports

But the one thing that it is supposed to be is a Flight Simulator. And it’s really hard to see that now it is on a Game Console and runs like a Game.

I know it will get better in time.
But for now, it has become a game to me.

my guess would be… (drumroll) photogrammetry? or should I say (pot-o-grammetry) =)

I 100% agree, I don’t see why if we had a flawless working sim during the first couple betas and now when they got rid of the memory optimisation it has to go downhill completely and stay like that. Why can’t we have two separate builds for PC and Xbox, I don’t completely understand why one would have to affect the other it’s kinda ridiculous. At least just add the option in the menu to toggle memory optimisation on or off, or whatever they removed which led to the performance loss. If it does release in it’s current state it would be a big shame and a step back yet again. Even more broken than SU9. Every time things break, pop out screens, HDR, performance. Basic things which should just be implemented correctly, the list goes on.

I 100% agree, I don’t see why if we had a flawless working sim during the first couple betas and now when they got rid of the memory optimisation it has to go downhill completely and stay like that.

As I understand it, DX12 memory optimization was only turned off for Nvidia GPUs. It was not turned off for PCs using AMD GPUs nor for XBox, (which uses an AMD GPU). Perhaps the reason why XBox users are reporting that SU10 performance is excellent? I’d be curious if AMD equipped PCs are having the low frame rates / stuttering in SU10 beta 4 that others are reporting who have GTX/RTX Nvidia GPUs.

I thought we were over this.
The live weather is borked again. What are they doing? 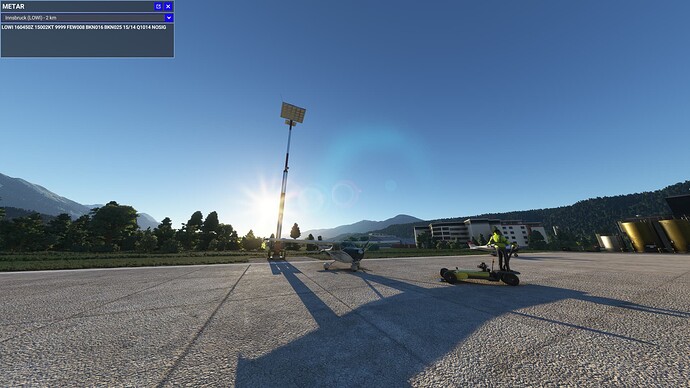 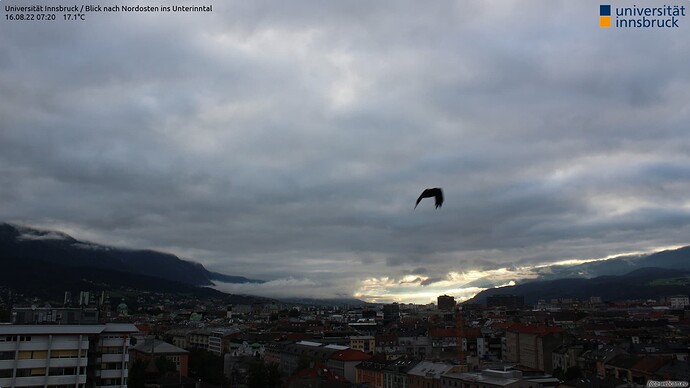 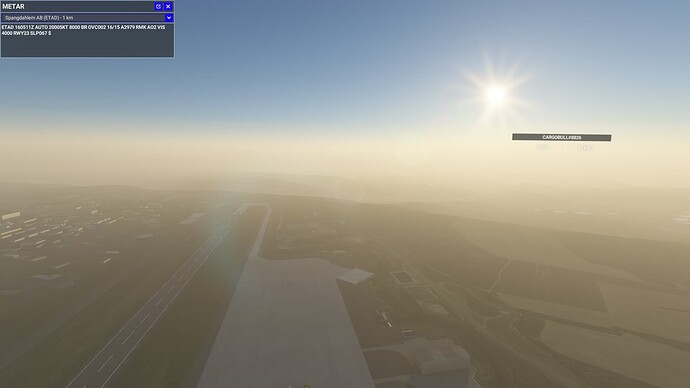