Rolling Cache and other settings disappeared

Are you on Xbox, Steam or Microsoft Store version?
XBOX
Are you using Developer Mode or made changes in it
n/a

Brief description of the issue:
Just wanted to adjust the “rolling cache” but the choices and entries are no longer on the corresponding settings page. Also the Bandwidth and Data adjustment choices are gone.
My suspision is that this has something to do with my trial run in using fs2020 in the Cloud?! While starting the fs2020 on XBox I got a weired message about Flight Simulator “syncing” and now I think: could it be that data are synced but there is no rolling chache in the Cloud version (as well as no adjustment for bandwidth) and these settings were simply erased from the XBox version due to this syncing?

Provide Screenshot(s)/video(s) of the issue encountered:
will add Screenshot here… 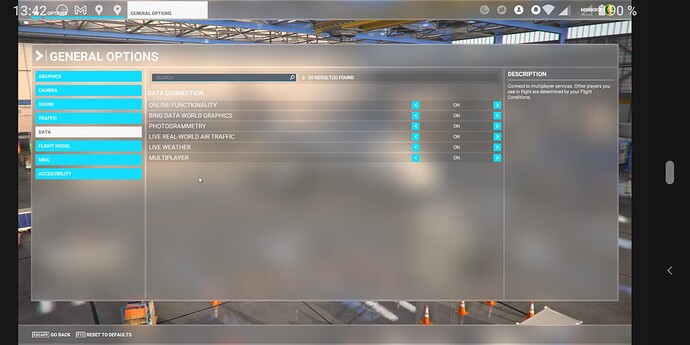 PC specs and/or peripheral set up if relevant:
n/a

Build Version # when you first started experiencing this issue:
SU8 and when trying fs2020 in the cloud for the first time

oh wow, thanks, i am not going to try the cloud !! lol
i had also this, i played on pc and on playing on xbox the controller acted weird.
had to set that back to default on pc then it worked on xbox…
seems to me there is a profile mismatch…meaning only one profile in the cloud, where there should be several depending on how you play it.

Same issue here, cannot adjust rolling cache. The option doesn’t even appear unless I search for it and even then I cannot select any of the options. Xbox Series X.

Had the same, after a complete new installation all was fine again

I am on Series S

Thanks, I’m not going to the bother of reinstalling for now and it doesn’t appear to be causing any issues other than I cannot select most options under the Data tab.

i have had the same problem after su8 update. so i deleted the game from my xbox series x and redownloaded 140 gig of data which took 2 days as i have a very slow internet. on restarting fs2020 the same data section is still missing no rolling cache, I am gutted please anybody any suggestions as to what i can try to fix this problem.

Might the missing cache settings be because i downloaded the GamePass version which is the CLOUD aversion. iI purchased the physical disk for flightsim 2020 for Xbox. I tried reinstalling from disk but on launching game an error told me it needed an update of 97gig, in order to run, other words the whole game. I went through that procedure initially and the cache setting were there. on updating to the latest build su8 the cache page settings were missing. Please Help what should i try??? 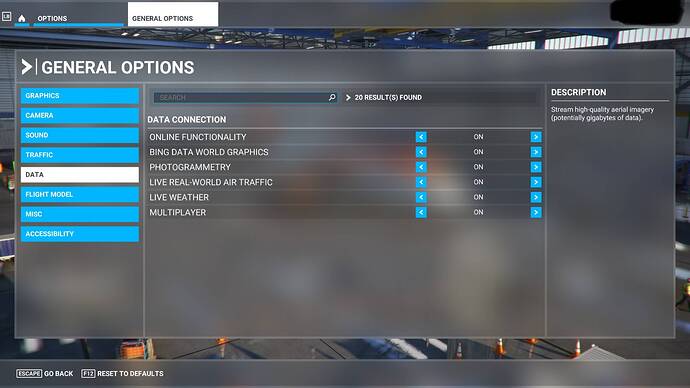 So could this mean that the problem has nothing to do with having used fs2020 in the Cloud and thus some subsequent syncing of data and settings but a problem that was introduced w. SU8?..?

I think it must be a SU8 issue as I know of other people who have used the cloud version but do not have this issue. If I search for Cache it appears but I cannot adjust anything. 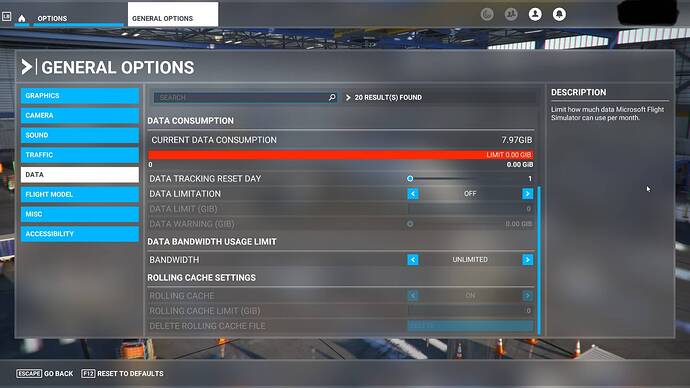 Ah, so you see the entries but cannot change the settings. That is different for me as I Do not even see/have the entries anymore. Let me check real quick if I find them when I search for them just in case they have been moved to another place…

I don’t see them unless I search for them and then I need to clear the search, go to another tab (Camera) which requires me to scroll to see all options and then return to the data tab. All a bit longwinded and most options are greyed out anyway. My other screenshot shows the initial options I have visible.

I understand now what you are saying: I have the same result. When searching on the “Data” Page for “rolling cache” or “data” then the lost entries are found! While you cannot change anything for the rolling cache (all selections are greyed out) you can for example set “Data Limitation” to “off” but the settings disappear right away. You have to search again for them and then realise that the changed setting is kept. Change it again and the settings disappear right away again. I’m curious now when MS/Asobo if, how and when will fix this.

I submitted a zendesk bug report about this but oddly it says solved when it’s definitely not solved.

I’m having the same issue since SU 8 (XBOX Series X). I ran the beta before the public release, and didn’t have this problem there. But once I received the final update upon the public release, the sim stuttered and froze so badly that I reinstalled the entire sim. It was only after that that I noticed half the “Data” menu missing, including the Rolling Cache settings, exactly as you are showing.

Other issues have appeared since reinstalling with the public version, including being unable to delete or uninstall any components of the basic sim, or the deluxe or premium upgrades. I have FlightBeam’s KDEN, which requires deleting the default KDEN to prevent scenery conflicts. I have always been able to do this, including with the beta version of SU 8, but now it won’t let me delete the default. Weird thing is that the default KDEN scenery isn’t showing, so it looks OK anyway, but I’m not sure why or what has changed.

Reinstallation after the beta has gotten rid of most of the bad freezes and CTDs, but there are still a few occasional several-second pauses.

I’ve now reinstalled the entire sim a second time, and exactly the same issues exist. Still have half the Data menu missing in settings, including the settings for the rolling cache. As someone else suggested, I was able to use Search to bring up the rolling cache settings, but they’re all grayed out (and the cache size is defaulted to “0”). Weird thing is that when I clicked on the “x” to clear the search bar the rest of the Data settings appeared, and not grayed out, but they extend beyond the bottom of the window (which is normal) and cannot be scrolled to reach the rolling cache settings (which is not normal).

Also still cannot delete any sub components of the core sim, nor the deluxe or premium upgrades. CAN delete components of any third-party add-ones, however. This is a change from past behavior.

And the LVFR static aircraft package, which worked fine before SU 8, now doesn’t work at all, confirmed through two reinstalls. I’m on XBOX Series X, so the myriad of PC hardware combinations that can cause issues don’t affect me.

This thing is a MESS since the update. I’ve never had so many problems, and on a fixed-spec closed box, as I said, so these are DEFINITELY problems caused by the update. In addition to everything else, I’m still noticing long pauses that didn’t occur before, several seconds to as much as 30-45 seconds long, and they happen in exactly the same geographic locations every time. These are areas I’ve flown in a lot, so I know these freezes didn’t occur before.

Additional note: The LVFR static aircraft package actually worked perfectly during the SU 8 beta, but is now broken in the public version. Bizarre.

If you move to the Camera tab and scroll down and then return to the Data tab you will be able to scroll. Sadly it’s still greyed out.

The options for cache in options/data is missing.

You mean the entire line is missing from the options page?