Round the world in a X Cub

After reading SirDanFlyBoy adventures in his Cessna, I have decided to start my West to East around the world in a X Cub. I am am leaving for KHIO (Hillsboro, Oregon) and my first stop will be CYYJ (Victoria BC), I will work my up to the Aleutian Islands, then over to Russia, down to Japan, and across to Korea… After that I am not sure what way I will go. Most likely through China, S/E Asia and India. No fuel cheats and using live weather. 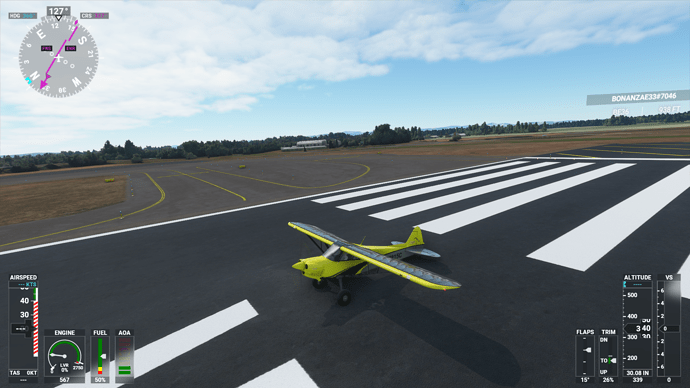 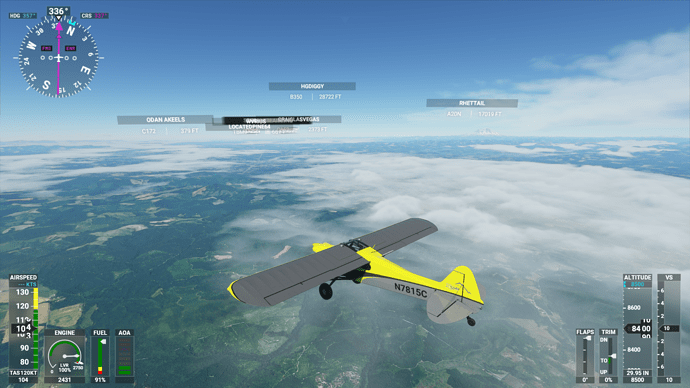 Flying over the Olympic Mountains a 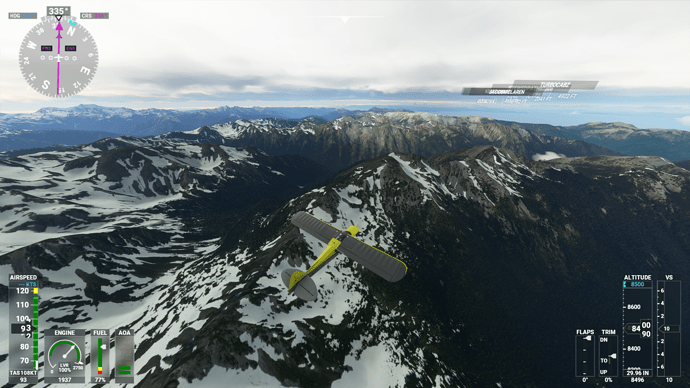 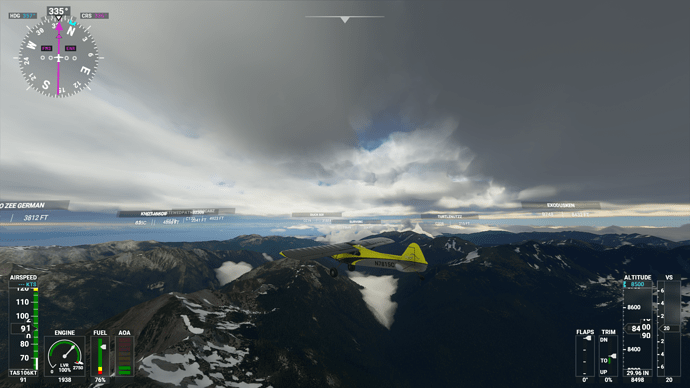 After a pint or two at the Sticky Wicket in Victoria, decided to enjoy the sunset and 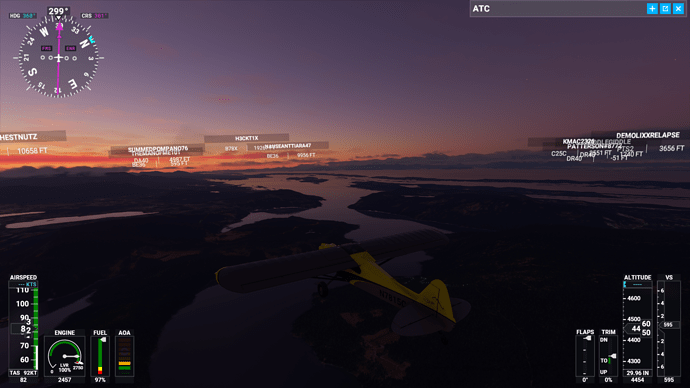 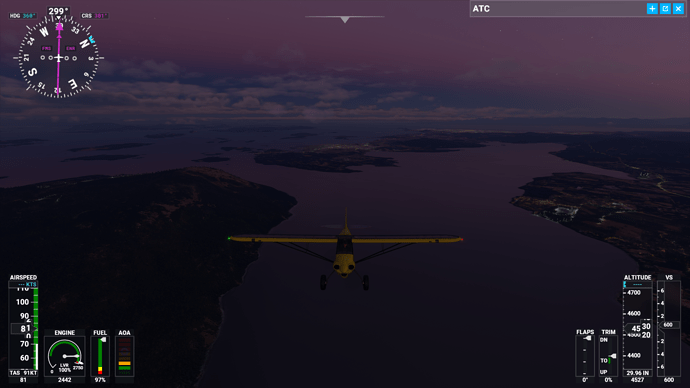 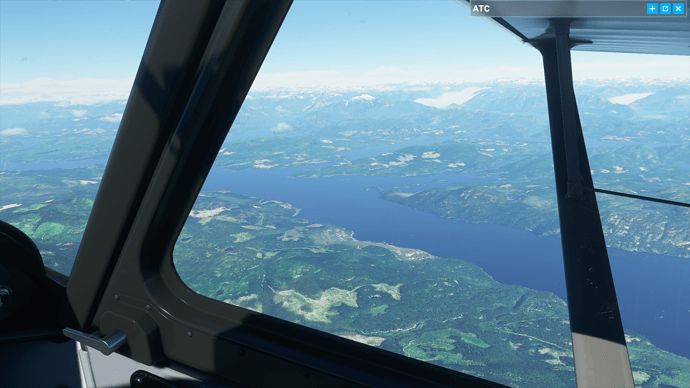 Getting a bit foggy, going for Port Hardy where they have ILS 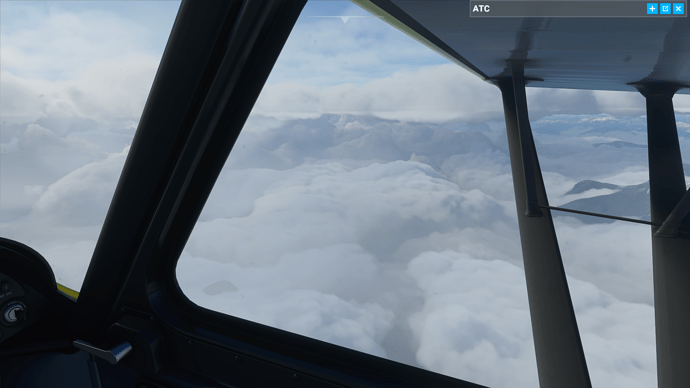 Went from Port Hardy to Sandspit, now heading to Sitka. Cloudy but flying between layers. 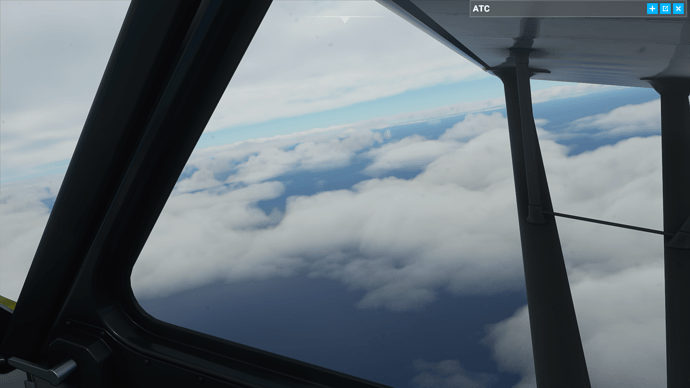 Made it to Skitka, it was socked in! 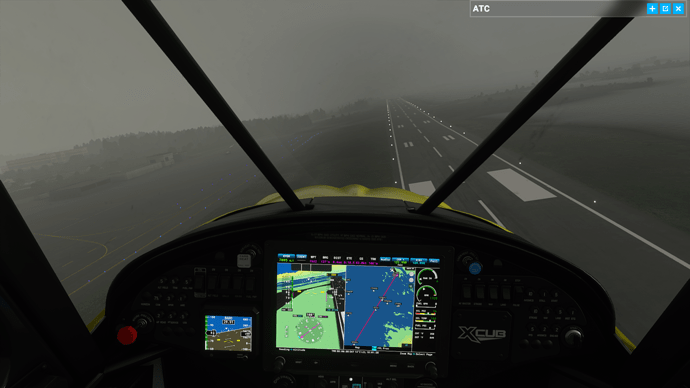 Awesome stuff. I’m starting to think about a RtW trip, but I think I’d like to do it in something a little faster than a cub… about how long are each of your legs? Maybe I could follow your plan!

For now I am doing about 2 hour legs after work but will need to do a couple 5 hour legs getting to Russian and to Japan. I like flying the TBM but zipping along at 300 knts at almost 30,000 ft for 5 hours takes the challenge out of it but I also don’t want to do a lot of long legs, want to make it fun, not a chore. I am not set on a final route but I know I want to fly through North Korea and once I get to south China I am not sure if want to side trip to Australia or go straight in Vietnam/ Thailand.

On RNAV approach into Gustavus AK at sunset. Nice to have the long summer days in Alaska 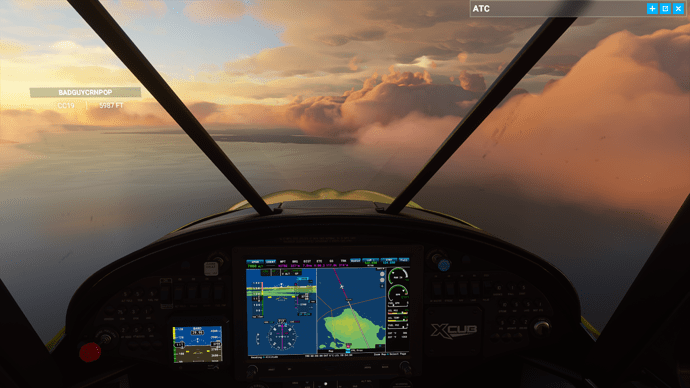 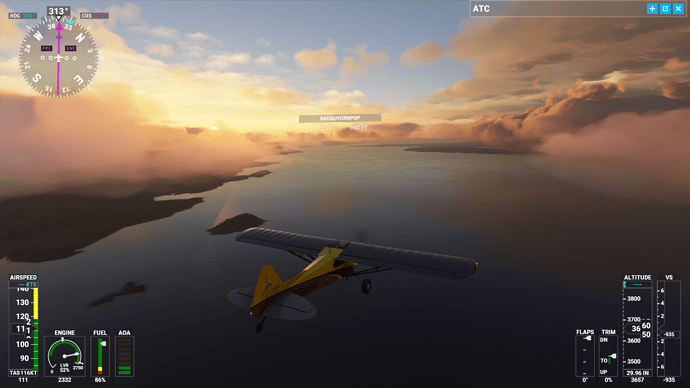 Really curious to see how you do the ocean crossings and over sparse regions of the far east, so keep us posted. I would love to take a bush plane around the world, but I’m worried the minimally implemented flight model, live weather, and sim features are going to lead to disappointment after I had already put a bunch of hours in. Like the plane is going to prematurely ■■■■ out due to inaccurate range, or the avionics are going to go bonkers, or saving the flight is going to break other parts of the simulator. So I might wait for a few patches before attempting it.

Shouldn’t be an issue if you’ve got the range, but was curious on the east to west direction you chose. You’d be against the mean flow aloft. You could probably avoid the jets fairly easily by flying low or around them, but they could also be used to your advantage to extend range: 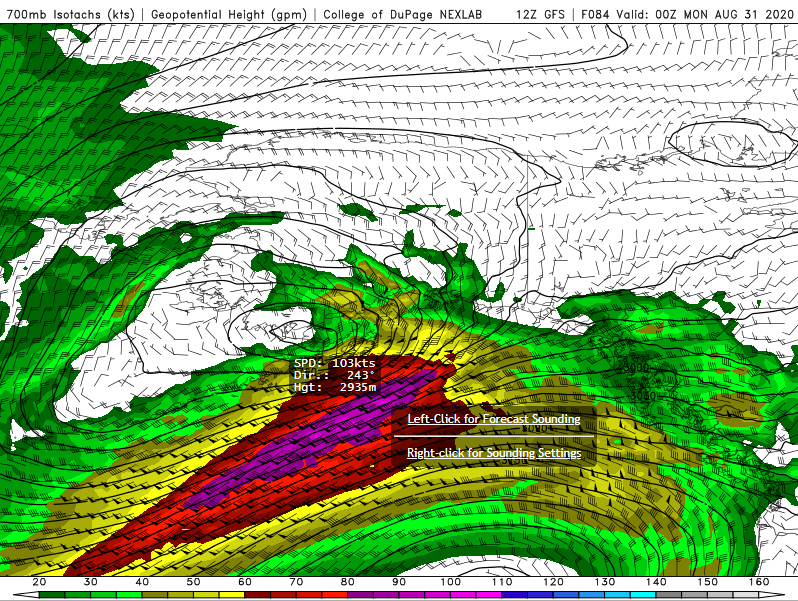 Could ride that jet streak early next week, get up to 10,000 feet and you’ve got a 100 knot tailwind going eastward from south of the Aleutians.

The x cub maxes out around 14,000 ft so I do plan on flying lower at most 10,000 depending on winds. There are couple stretches in eastern Russia that will push it but I could fudge a little and " carry a couple Jerry cans" since I do have some weight room to work with. As for the Atlantic, I think I can fly north the Faroe Islands and the to Iceland, the Greenland and to Canada, all of those are less than 500 mile hops

Left in a rain storm from Gustavus on my way to Yakutat (PAYA), getting some clearing, hopefully it will hold. 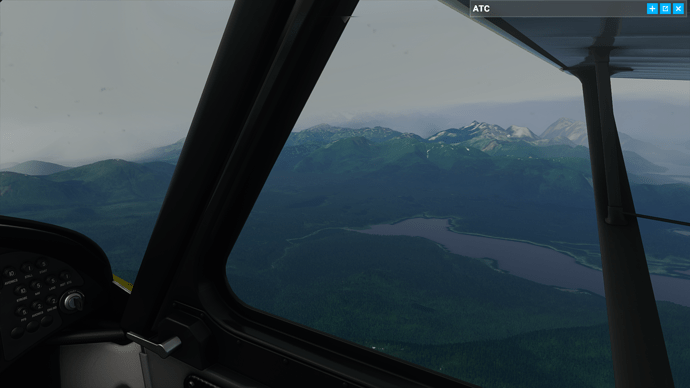 After getting through the some clouds and a quick stop at PAYA, on my way to Cordova, not far from the Exxon Valdez oil spill. 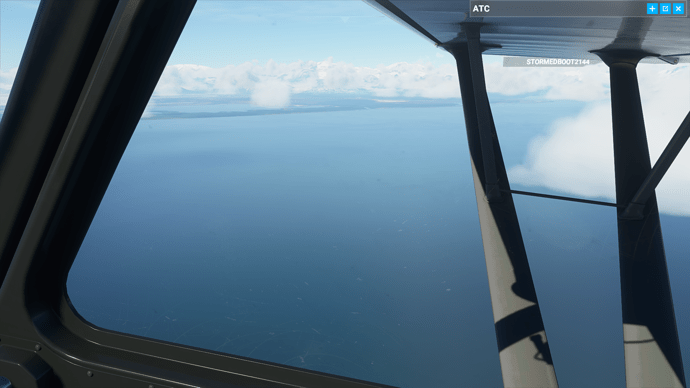 Just for fun, I tried to take the X Cub from Casco Cove, AK (PAAT) to Petropavlosk, Russia (UHPP) and I came up 30 miles short. Luckily I made it to land and was able to dead stick it on to the beach. I’ll have to do a better job planning and optimizing my fuel economy. I pretty much just set the autopilot at 3500 and let it go. 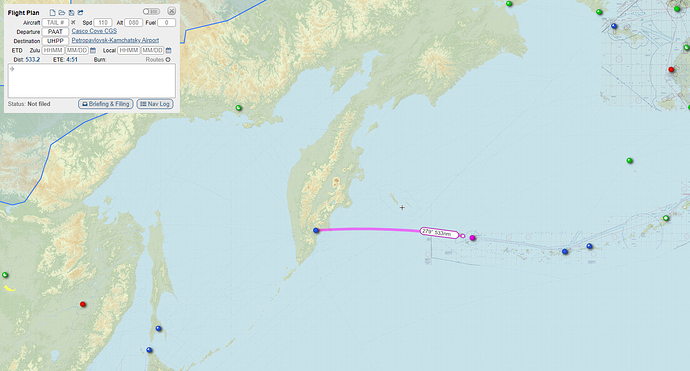 Yeah that is the stretch I worry about. Did you use AI to fly and switch the fuel tanks? I do find it I turn on carb heat and lean it out I can reduce fuel burn to 8 or 9 gph at around 8000 ft

Tested again, this time really trying to stretch the endurance instead of just not caring at all like I did the first run. Took it up to 9000’ and brought the throttle and prop controls way back, leaned it of course, and got almost 850 nm before the engine quit. If you tweak that some more and throw in a nice tail wind, you should be able to stretch it way past 900 or even 1000. But it seems like the long legs of an XCub world tour or more than plausible. 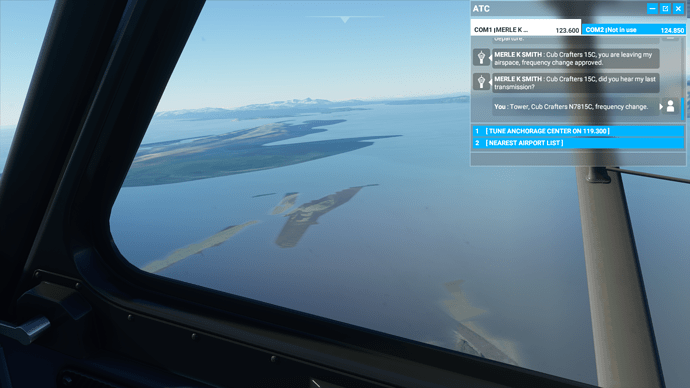 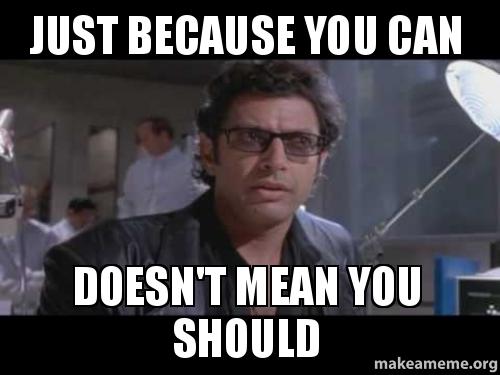 Ran into a little icing. Had to drop down to about 2000 to some warmer air. 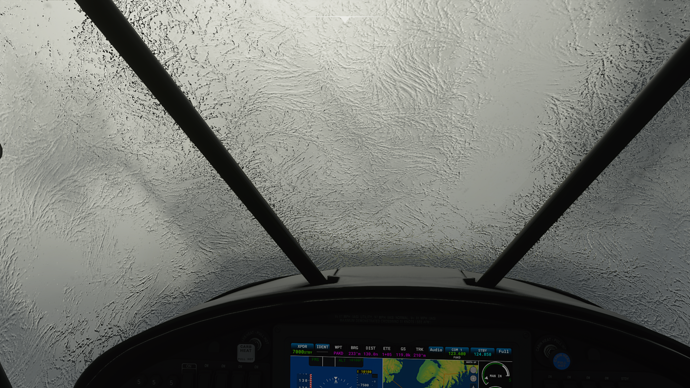 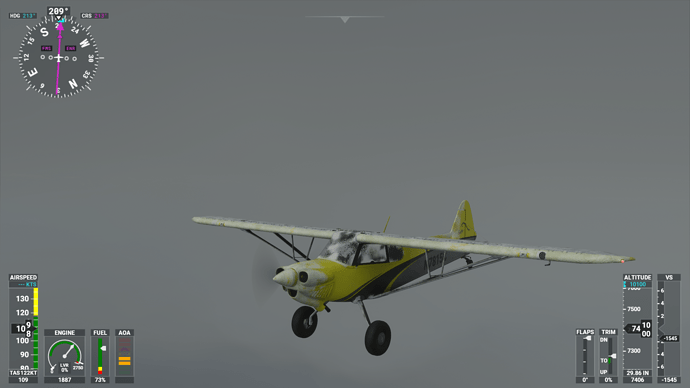