At least 2 stock planes (on a vanilla install of MSFS 1.26.6.0 on Xbox X) fly with RPM flashing red, but have no RPM control. The JMB VL-3 does have an RPM control, but it is not functional. The Diamond DA40 NG only has a FADEC throttle (no separate RPM or Mixture) and unless the throttle is under 30%, the RPM red-lines.

Open the Discovery Flight for France, it spawns in mid-air in the mountains in the Diamond DA40 NG, RPMs already in the red. The RPM control lets you change the RPM visually, but it has no affect on the RPMs.

I’m surprised that with the upcoming Microsoft Flight Simulator 40th Anniversary edition, that the basic flight control of these default aircraft haven’t been fixed.

These 2 planes start with RPM in the red, and there is no way to control RPM.

JMB VL-3 - there is an RPM control in the cockpit, that does nothing. It even has a chart showing the proper RPM settings for Take Off, Cruise, etc, and you can change the RPM shown on the dial, however, it has no effect on the aircraft, which just red-lines.

Diamond DA40NG - even in the Discovery Flight in the French Alps, it spawns already red-lining, with no way to reduce. It has a FADEC which is supposed to manage it, but perhaps the plane is modelled on the older DA40NG with manual RPM and Mixture?

I plugged in a keyboard to the Xbox but couldn’t find any control mappings that would have fixed either plane (I tried Propeller Pitch, and there were no RPM settings)

MSFS is great, but I don’t understand why Microsoft and Asobo don’t make the default planes work really well - especially when that is what new users try first. As someone who is new to the platform, I’m really hesitant to spend any extra money on the marketplace if the default stuff doesn’t work. Thanks. 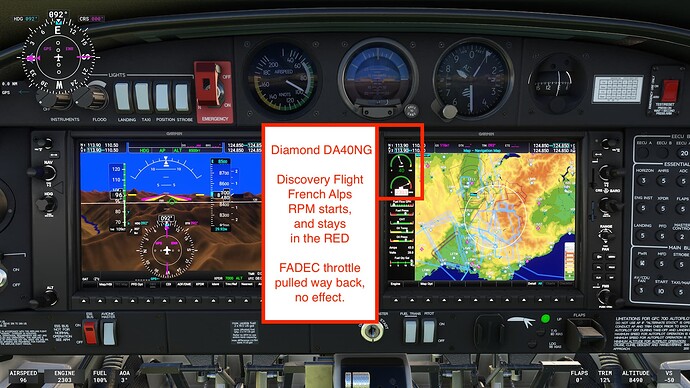 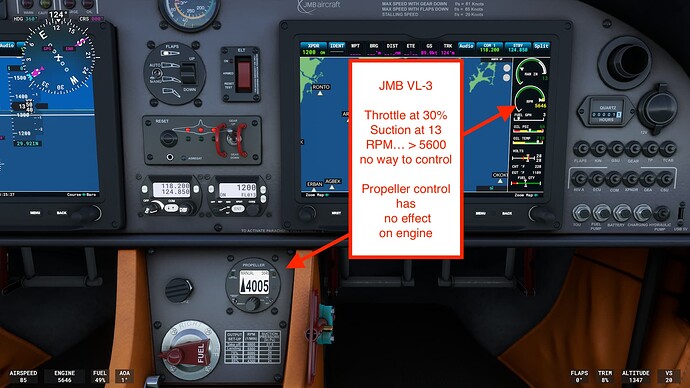 @Jummivana Hi Jayne, a question for Microsoft: This RPM issue with 2 of the 25 base planes in MSFS has been reported since 2020. With the 40th Annivarsary of MSFS coming up, I’m surprised MS / Asobo aren’t making sure that the basic avionics of the base planes work. It is called “Flight Simulator”, after all. Why is this being ignored for so long? I am really hesitating to spend more on MSFS if the basic controls of the base planes don’t function.

I mean even basic acknowledgement that the issue exists, MS / Asobo are aware, and it’s on a list to get fixed eventually would be better than the issue just being ignored. Thank you.

Don’t forget to vote on the issue for the DA40 NG’s RPM redlining:

Since last WU the RPM on the DA40-NG is constantly red lining. Noticed it during the France Bush trip, but it is also preasent outside of it. I have just a few user made bush trips in the community folder. Any one else noticed this?

Issue is still there. Anyone from Asobo responded to this?

I just watched today’s Developer Q&A, and Matt from Working Title (as part of the official development team) announced they will be “refreshing” avionics packages for quite a few default planes. For example, they released the Garmin G1000 NXi this summer, and the Garmin GNS 430 and 530 last week. The Garmin G3000/G5000 and a CJ4 refresh is coming by end of this year. Each replaces the default Asobo version in the sim.

I believe once those are complete, they will continue to refresh avionics in forgotten / neglected default planes, such as those listed in this thread. They weren’t specific, but it’s the first time they’ve acknowledged doing more than just those already listed in their Discord. I believe to do the avionics, they actually take the time to model the underlying systems, then have to build the UI (which takes months of time), so each is a big job, but the result will be much better planes. I hope.

In short, I believe they’ve heard the requests, and have a plan to refresh avionics.

Okay, I am currently working my way through the new Bush Trip Vancouver Island which uses the JMB VL3, a plane I haven’t used before. I was quite confused with its RPM situation.

Is this a constant speed prop? I’m unfamiliar with those to begin with. Now I hear it’s just broken. Excellent

Can confirm the tiny rpm switch does nothing (in the tooltip it stays value of 0). I did accidentally manage to change the prop pitch with a keyboard press and it the sound and performance seemed different after that. But at the same time I see no in-cockpit control for prop pitch. So confused.

I think basically it’s not modelled, but the plane seems to fly ok, you just pretend that the RPM doesn’t exist. The developers at Working Title have been redoing the avionics in the Microsoft / Asobo planes, starting with the Garmin G1000 NXi, Garmin GNS430/530, and soon the Garmin G3000/G5000 and the CJ4. There will be more of the avionics refreshed for the base planes (perhaps the 747-8i, and these ones listed in the thread) but we’ll have to wait until they get to them, I think.

Yes it got broke over the su9/10 patches I think. Now only will allow rpm to be set using axis or key binds.