So, today I got my 4090 (MSI Gaming X Trio), and I spent the whole day testing the beast. Here are some thoughts.

The tests cover TAA and DLSS Performance, with both DX11 and DX12.

The test run is a replay featuring a double passage over Manhattan (from Lady Liberty to the end of Central Park, and back, all below 1500 ft), with clear skies. So, it’s always exactly the same. I was flying an MB-339, with internal view.

Now, first thing I want to say: I don’t know why, but I see basically no difference between DLSS and TAA, for what concerns the FPS numbers.

Each image has its explanations. As a general note, I can say I was expecting a bigger increase in the DLSS FPS numbers – probably we’ll have to wait for DLSS 3.0, for that. With TAA, on the other hand, the improvements are already very good.

The best thing, anyway, is that the 4090 is smooth as butter in ALL the testing configurations, including those with all the VR graphic options maxed out. Flying over NY was simply impossible, with my 3090, using everything to the max – I had severe stuttering every time I looked around. Now, it’s always smooth, and please remember we’re talking about low flying over Manhattan. Frankly, I wasn’t even hoping for this.

So, in my opinion, this is a good start for the 4090, particularly for what concerns smoothness. We’ll see with SU11 and DLSS 3.0 what will happen with the FPS. 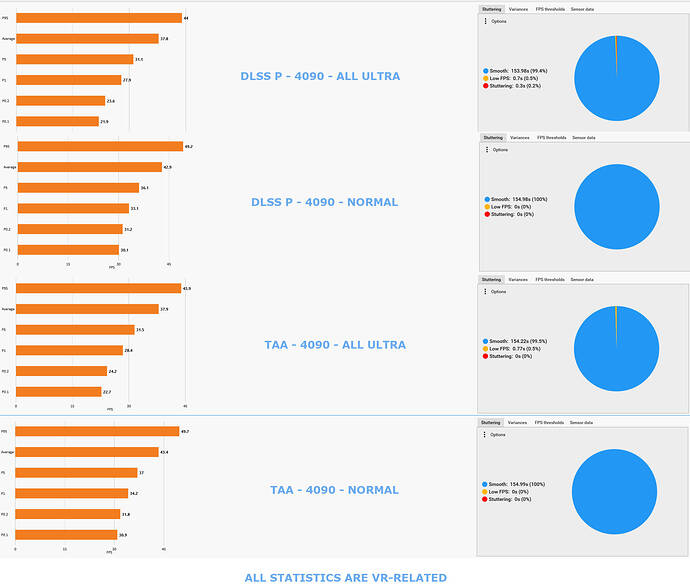 ULTRA_VR1941×1650 167 KB
This image shows how smooth is flying in VR with everything maxed out. Both DLSS and TAA are basically 100% smooth, and it’s virtually impossible to distinguish between them and the “normal options” versions (these options are visible in the following image). 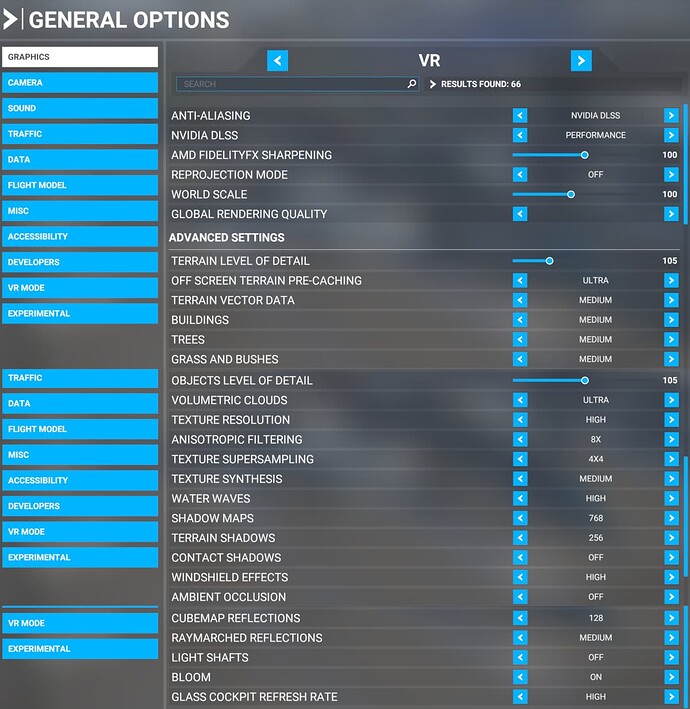 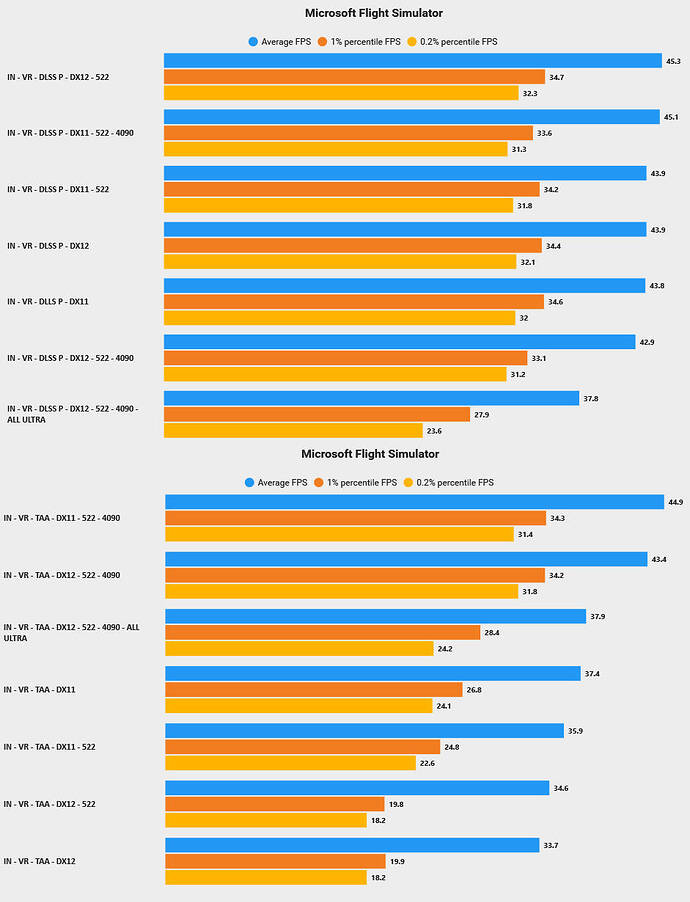 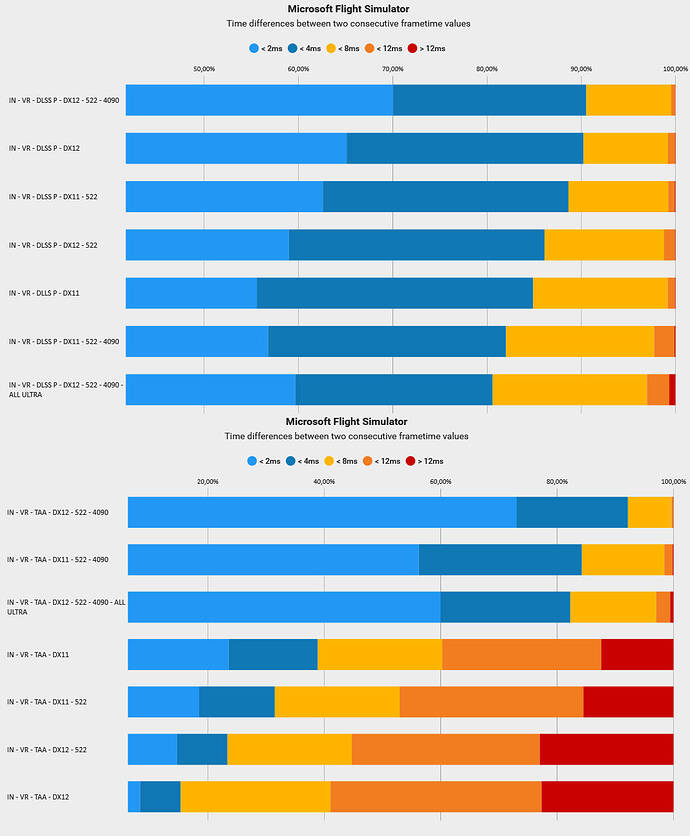 ADD-ON - thanks to another user suggestion, I tested all the options on Ultra, with OpenXR render scale set at 200 (!). Well, I’m really, really happy! The picture quality I get is INCREDIBLE, and with RP the smoothness is even better. See below. 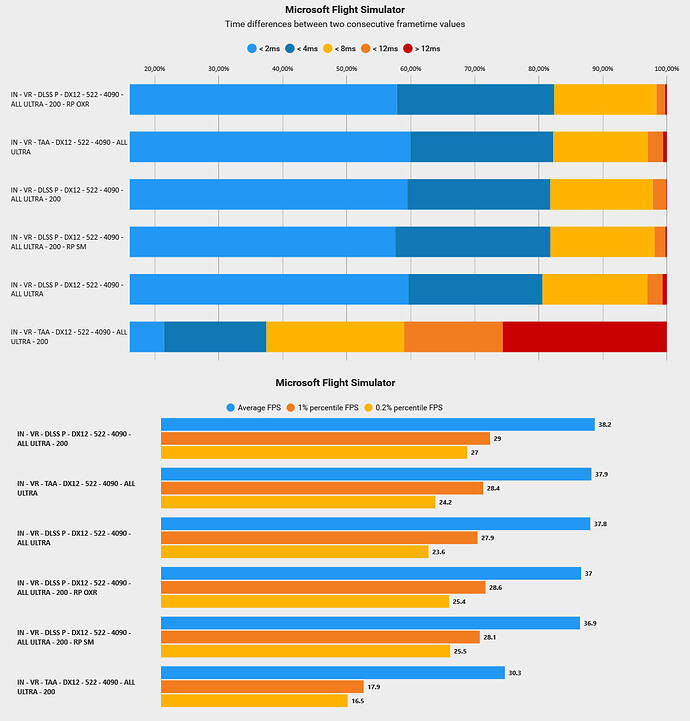 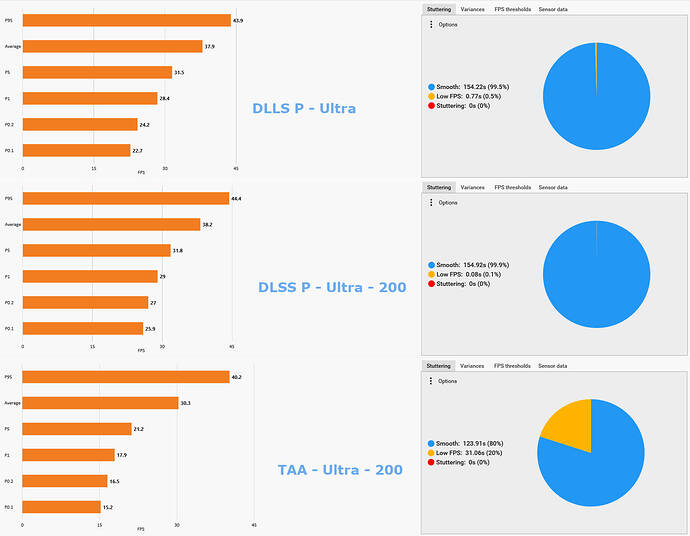 Terrific detail - I know that took some time! Thanks from all of us. Yes, the most peculiar thing is the dramatic improvement in frametime consistency - why should that be? The 4090 should be faster - for sure - but I don’t understand the improvement in frame to frame consistency using the same application (MSFS). For your data entries for IN-VR-TAA-DX12-522, I see with the 4090 you get 73% <2msec (WOW) versus for the 3090, 12%). This would help us 3000 series folks using Motion Reprojection if it were a firmware/driver upgrade but maybe it really is an architectural improvement. I noticed this on another thread that published 4090 results with about a 4msec. improvement from a 3090 - but the frametime noise was much lower with the 4090.

A piece of info that would help me is the version of windows (I am on 22H2 (22621.674)) and concerned that it might have more stutters than with 21H2. I would appreciate it also if you could publish a raw frametime plot from CapFrameX for both 3090 and the 4090.

Just try with the high settings you’ve got just changing openxr to 200 and launching vr again.

The quality it gave for me was outstanding whilst the FPS barely dropped.

Excellent results, especially over Manhattan. The smoothness is next level stuff. I have the 5800x3D, but with slower 3200 ram, so it will be interesting to compare results when my 4090 shows up in a few days. I can’t wait.

Edit: Your “normal settings” are almost the same as mine with the G2, except I have clouds on high.

thx for sharing! but how do you know which version of DLSS it is? It seems like you assume it’s not DLSS 3.0. Thanks!

He’s not running the SU11 beta — can tell from the settings screen — so it’s DLSS 2.

The SU11 beta should double the DLSS frame rate with his 4090 if the hype is true.

Running SU10 with a 4090 is like running a Ferrari on regular unleaded. Or putting Avgas in an F-35. Or something.

I can see why the OP wouldn’t want to hassle with a beta (and SU11 first beta has bad CTD issues with some addons), but with a new $1600 graphics card you”d think it’d be worth the annoyance to see what it does unleashed.

No DLSS 3 on this test

Out of interest, why are you testing with DLSS on performance? Your CPU is going to bottleneck under every scenario with that card and SU10.

That’s something I’d like to understand… is there DLSS 3.0 in VR in the SU11 Beta, or not?

I’m hearing conflicting reports about this

It was just to test with the very same options I was using with the 3090.

I’m still on 21H2, I switched to 22H2 some time ago but then I rolled back, too much stuttering. Will try again soon.

You’ll have the same problem with a 3090 though (unless you use VR of course).

No there is no dlss 3 with vr atm, I just tested, it makes no difference in vr

It seems it works - but only with DLSS, I see that with TAA it gets basically unusable. Also, I got my first crash with the 4090, yay!

Will test a little more…

I posted some new images and notes about this.

Did you get any studders in the Aero with the 4090? Many posts on the varjo discord about significant studders with the 4090 GPU making it hard to use the headset in many games.

Yes I have some stutters wity the aero even at 45 fps. Especially when I move my head… It is not unplayable but definitely disturbing

That’s something I’d like to understand… is there DLSS 3.0 in VR in the SU11 Beta, or not?

Definitely not. DLLS3 doesn’t work in VR, and noone knows if it ever will, as it introduces latency and reconstructing past frames, while MR reprojects future frames.

I have an almost identical setup: 5900X, 64Gb RAM @3800, 4090 (Gigabyte Gaming OC) / Reverb G2, but I can’t get past random scenery stutters every few seconds, while having otherwise an extremely smooth experience. Are you saying you don’t have those? If you’re flying and looking to the side, can you fly 30 seconds without any microfreezes, pseudo missed frames or “rubberband” jumps in the scenery? I’ve been testing over Manhattan but with significant clouds and in 737, so more load. My reasoning is it should look good in that situation, then it can handle everything. Can’t do max settings in this situation. Running steady 30 fps MR, sometime jumping to 45. But locking to 30 doesn’t get rid of scenery stutters. Do you experience them or not? If not, it would be interesting to know what’s different about your system. I’ve been having them forever, obviously with lesser settings with 3080 before. but now that everything is so beautifully smooth with 4090 the stutters are only more obvious.