Hello,
I have a problem with this CPU. After upgrading from 3900X. The main problem is as I start flying airliner(PMDG …A320). my FPS are quite good around 50FPS. But the problem is on approach and landing when FPS drops to 20-30. I assume it is normal behaviour. But as I monitor CPU usage the result is , that in whole flight CPU is rununig at higher clock speeds and temperatures65-70. While approach and landing, when we need to push CPU to max , it starts sleep with temperatures 55 and clock speed only 2Ghz this results in loww FPS and huge stuttering. I have latest dirvers, windows update, no mlwares, latest bios. Everything is running in stock(default). I realize that on 5900X ryzen powerplan is missing. I undervolt CPU but no affect(windows completly ignore this undervolting or MSFS and running at highest voltage). My simulator setting are to High - end. Can you give me advice how to force CPU running properly?

Possibly. You are playing at 1440p meaning your gpu is being underused and is dragging the cpu performance down with it. Setting all graphics ultra, raising renderscale and possibly lowering LOD (and traffic) might help but the real answer is to get a 4k monitor. You can try using a custom 3840 x 2160 desktop to test this first (it might be blurry but performance should be 4k).

Alternatively your system isn’t supplying the necessary data quickly enough, this could be due to ram or your harddrives and how they’re set up. Maybe even a setting somewhere e.g. SVM in bios should be disabled. Internet could also be a problem, virtual memory etc. The list really is endless.

I can suggest two things to try. I am also on a full AMD machine, with a similar setup. I run the game in DX12 perfectly, with very few problems. AMD Adrenalin driver 22.5.2 was causing me MAJOR graphic issues, and I downgraded my driver to 22.3.1. I am also running VR in close to Ultra settings, and all is good. “IF” you decide to try DX12, clear your cache, as you make the change. All of your CPU issues may disappear with the multi threading of DX12. At least they did for me, and my internet is not terribly fast. Obivously, your performance may very, but mine is great. Your CPU would be much less loaded on the single core, that DX11 uses.

Many thanks for you response. So I will play with yours recomendation and let you know. Regarding AMD graphics drivers I canot find 22.3.1 only WHQL 22.5.1 on official web site for Win11. May I ask you regaridg software setting for MSFS in Adrenalin? Is there any special to pay attention? Thank you guys …

It’s more than likely an issue with the sim itself. MSFS since SU8 has been rather unpleasant for many.

May be youa are right…and windiws as well…theris pwer plans make CPU stuttering(ryzen 5000 dosent suport AMD plans, they use windows)

I have 2 rigs 11600k and. a 3050 and a newly updated (after a gift from my friend) 12900K from a 10700k and 3080 with DDR5 ram and an M.2 NVME both suffer from performance degradations on long flights after starting out buttery smooth. Even after removing mods. Both fully updated and all. I run p3d with heavy mods as well as xp11 with extremely heavy mods. No degradation or anything. I personally love MSFS above the other 2. But I believe it’s safe to say a lot of the people just blaming folks instead of seeing that it could possibly be Asobo’s issue that they need to fix are wrong. Too many people are having issues YOU SHOUDNT be having with a game. Constant crashes for some. Performance degradation for others. And it has not made it better that new stuff gets added while the old stuff isn’t even fixed yet.

I see the more updates - the sim runs worse…for me…today is all about marketing, but not to do the things right.

Out of curiosity , how long was your flight?

Just wondering if you encountered the dreaded FPS reduction after 3+ hours of flight? There is quite a few topics on this MSFS bug in the forums.

There is a new chipset driver that was released last week at the amd site… I would suggest trying that. It has power plan and other features. If you using SAM in your Adrenalin software, disable that before installing the chipset driver, re-enable upon completion of installation.

hello @Emerald0771346 I test it regarding flight time sveral times and no matter how long was the flight the FPS on touch down always drops below 30. And as well try different airports - custom or hand made or airports near big cities or even in the middle of nowhere…same result. Sometimes large airports in big cities perform better for example EFHK was fine 35FPS.

@DrunkardDufus I have latest drivers but I installed them with SAM enabled should i do it once again?

Yes, disable SAM , reboot and see if it improves. Also uninstall the Adrenaline software and just have the GPU driver installed. Have you checked the MSI site. I read on the AMD site that someone with a MSI board and your CPU was experiencing throttling. MSI response was to increase the voltage by 0.05v in the bios.

I‘m having the same cpu and gpu.
I can say that I too have similar performance issues as you describe.
However, I do not think the cause of the fps drop is not at our end.
It‘s within the sim.

Someday the sim runs great even the approaches and landings and sometimes its just a slide show.
It differs from day to day.

Now I see, according to the latest dev update that the team is working on solving issues related to performance.
Hopefully we see an improvement with the next sim update. 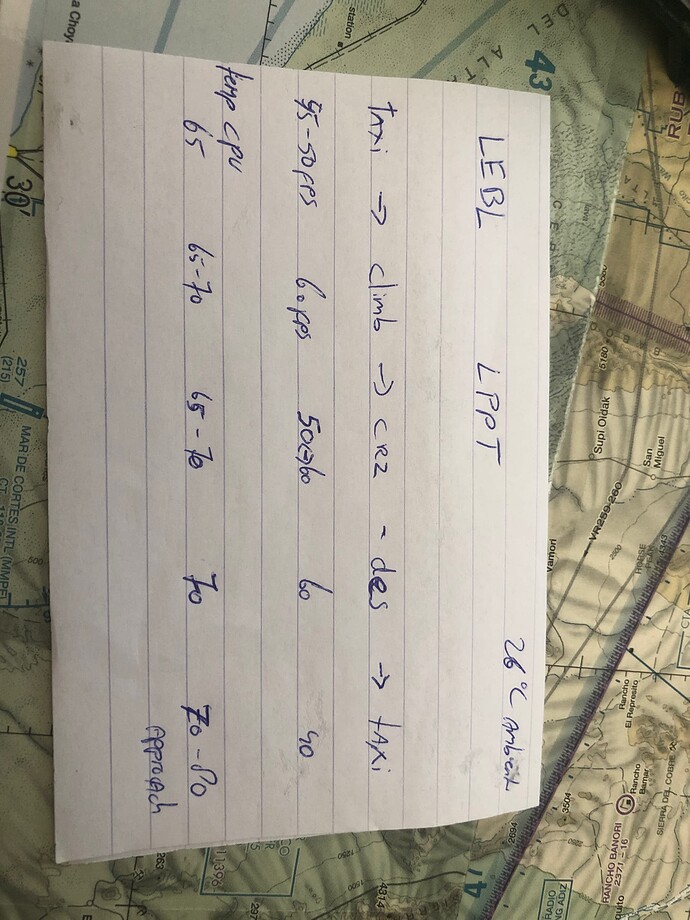 @DrunkardDufus you are incredible helpful I really appreciate

thanks a lot but come back …I did some ocerclocking via cinebench and ryzen master …and the best results was PBO manual with negative curve. In mutitasking all cores war running at 4530 and in single 4920!! stable whitout thermal throttling. But in gam on approach instedat of rising temperatures and pushing it to max clock …55°C and 2.1 Ghz…again the same. How did you mean to overvolt by 0.05? I will try in BIOS jut tell me how.

have a nice day

@Boobbuster007 tis is the result what we were looking for …May I aked you the monitor resolution is default or you chage it manualy to custom?

I assume you are referring to the render scale…
I’ve set mine to 110.

Further more, I’m running my pc with stock settings except for RAM speeds and background downloads, I disabled them.

If you wish I can send you my in game graphics settings.

@Boobbuster007 sorry yes I mean rendeer scaling…anyway I will be happy if you can send…and regarding Adrenalin software are there anything special to setup? May be I have asked in this forum …i m old man

No problem, I’ll post the in game settings later today.

I can already say that I only limit the fps to 60 within the adrenaline software. Thats all.