I dont have a problem with ith double vision, only shimmering

Oh man…i just did a bit more experimenting. Are you sure you sufficiently exeprimented with the “optimise for performance mode” in WMR? I strongly suggest you read this thread (at least the original post and a few wmr devs responses down below. It would seem the mode is bugged and while it drops the FOV it DOESN’T also drop the targer render resolution, which effectively results in much more clear picture in headset. I don’t know about the g2, but on older headsets this is insane. I have to create a thread for this. 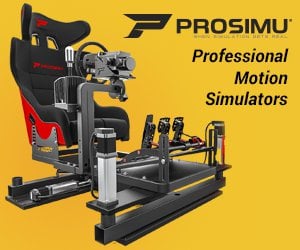 Interesting and quitr backwards, how the optimize mode can improve image quality.

But yeah im not really sure how to experiment with it other than leaving VR, turning the mode on,and going back in. Or do i need to reboot the PC in between?

As i said, i tried it and saw no difference at all. The shimmering is clearly an issue with the game’s rendering itself, as the marked increase with SU5 shows. I think it needs to be fixed on the ground floor, anything else is just a workaround/bandaid, especially if it decreases FOV.

I am also beginning to get the impression that the shimmer is worst on the G2.

Or is anyone experiencing shimmer of horrendous levels in other headsets?

I am also beginning to get the impression that the shimmer is worst on the G2.

Or is anyone experiencing shimmer of horrendous levels in other headsets?

I think some people here may be discussing general and typical aliasing/sharpening shimmer, and others discussing the specific SU5 building shimmering bug which occurs on buildings in mid distance in certain lighting conditions.

For the shimmering building bug specifically, Yes for me on quest 2. I got the impression from reading comments that it is actually worse in the Quest 2, perhaps due to slightly lower resolution. BTW I have just posted a short video in the bug thread, I can see it being triggered by building LOD change, which I guess explains why it is always in the middle distance

■■■■ i overread your post before. You really tjink SU8 beta improves the shimmer? What headset do you have?

Oh man that would be epic

But if its triggered by building LOD CHANGE, why is it pretty much constant at certain distance intervals? Its not like the buildings are constantly shifting LODs for 20 seconds, right? At least i wouldnt think so…

Hi
Just to let you know it worked for me.

Disable Ansio filtering in sim and enable x16 @videocard settings such as Nvidia Control Panel. Fixed it for me.

I use Reverb G2. I have been flying in different regions and I am sorry to say the shimmering bug is not fixed in this. They appear when the light hits the building in certain angles. Only on small buildings.

For anyone that hasn’t seen this:

The captain has sent me this compilation of his posts showing and explaining the shimmer problem from his perspective if anyone wants to have a look. My understanding is that MS/Asobo were not receptive to make improvements based on his insights, no idea why.

The first link is the very best capture of the problem on buildings I have ever seen, although it looks even worse in real life in VR. The last link does the same for tree shimmer.

If you too find this degradation of visual quality that seemingly started in SU5 unacceptable, please vote and comment on the main shimmer bug thread here: [BUG LOGGED] Shimmering/AA downgrade since SU5 (in-game, not menus/overlays)

If simply changing the Ansio filtering fixed it for you, I don’t believe you had the real issue in the first place. Please have a look at these two clips: Is this what you were experiencing before, and now it’s gone? Or was it something milder? This is the type of shimmer I and most others are talking about, except it looks even worse in VR:

Hello. Have you tried this? 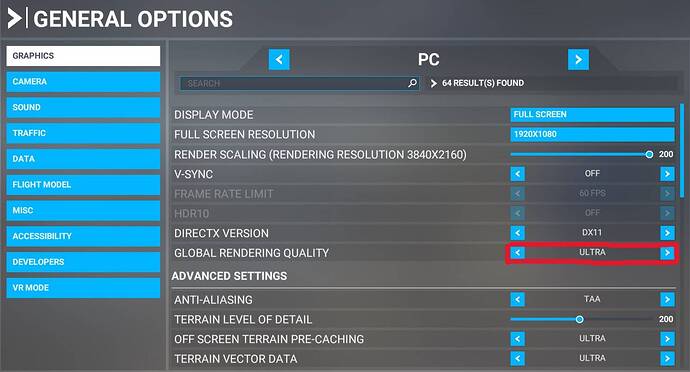 Seriously? We used to havr an effect like this pre SU5 where the PC render scale affected VR image clarity, i wasnt aware of this one though.

So what PC settings do you recommend? Just that global render quality one? Or others too?

And you are saying this definitely reduces the type of shimmer shown in the video clips for you?

I mean global rendering quality. Higher setting reduces shimmering outlines of in game subjects like trees and buildings.
Regarding 200 rendering scale, I haven’t tested yet. You could try this also if your current setting is lower than that.

And you are saying the PC setting influences VR, right? Alright, ill try it later.

OK so I changed the Global Rendering Quality to ULTRA, restarted VR, and took a look.

As expected, it made no difference whatsoever =(

So sad… Differences are mine is quest 2 and that I have changed the pc setting in vr mode. Anyway wish you to solve the problem so soon.

But if its triggered by building LOD CHANGE, why is it pretty much constant at certain distance intervals? Its not like the buildings are constantly shifting LODs for 20 seconds, right? At least i wouldnt think so…

It is indeed constant at those distances, but I only now realised that the shimmer does not appear instantly when the building moves into shimmer distance. Instead the reflective shimmer fades in/out 0.5-1 second after a movement, a bit like how buildings/trees are programmed to fade in or out or have level of detail changed at certain distances. This made me think the shimmer is not something to do with rendering technology (as I would expect this aliasing/shimmer to change instantly on camera move) but instead due to some property that is loaded when buildings are at a certain distance, and the problem is with this property, whatever it may be. My guess would be that the building material is moving to a different, simpler type of reflectivity and this reflectivity type is somehow broken.

In this clip the shiny buildings in the middle of the screen are shimmering a lot in the headset (much worse than the capture). When I slew forwards, after a short load time the buildings are less reflective and no shimmer. When I slew back again, the brightness and shimmering returns after a short load time. Vertical slew (sunlight reflection angle change) makes no difference. (Maybe this is obvious to everyone already but first time I have seen it )

I think this was autogen but it was not far from a photogrammetry zone so i cannot be fully sure.
However I posted a longer video of the same effect in the bug thread, which was certainly auto gen.

I agree the shimmering building issue is most commonly seen on autogen.

@RebuffedBee9595 - There is a setting to disable Photogrammetry so maybe retest with it off/on?