Should I get a PC - Guidance please

HI all,
I’ve been flying for 10 months now on an X-Box X as it was all i could afford and I wasn’t sure how good FS2020 was for me. Now I know I really like it and take a flight most days of the week (retired) so want some advice.

Now, having seen many Youtube videos, I can see I am missing a fair amount of visual detail plus due to stability issues I have not added any 3rd party airports or planes yet (hanging on SU10 for a decision) a point in question being the Spitfire and Duxford add-ons (local to me) pictured below is an example

Zooming in on this, it appears almost as good as a real photograph, the detail is amazing. I want this, I love the X-Box, for what it costs it offers a lot but its not giving me it all and I want the max.

I have tons of questions to follow, but to start with, can any PC users verify if this detail is correct, if the sim behaves smoother on a high-spec PC, especially looking for response to others that moved from X-Box to PC.

Yes. And if you have the money for it step in right now.
Hardware never has been more affordable then today, at least, in my country.

Well, wait a couple days for the 4000s to be announced and see the current 3000s cards drop even further.

I’d say yes but wait for the next gen GPU’s as they are getting close now.

My MSFS journey started with a Series S, then Series X, followed by high end i9 12900, RTX3080ti…. in order to fly VR with a HP Reverb G2. Visuals do improve over Series X and I’m able to set most setting to Ultra, although I only fly VR now unless I’m using YouTube as a tutorial. What I can say is PC opens up many free addons such as power lines, cable cars etc., (take a look at flightsim.to). If your not interested in trading the immersion of VR with the reduction of visuals, a PC opens up the opportunity for eyetracking (see Simhangers channel on YouTube)

Ok, great, sounds like a solid +vote for the switch.

Not interested yet in VR but tracking could be on the cards.

So, a PC - are we looking at DIY or off-the-shelf box? I’ve no worries about building but the last one i built was a Pentium Pro

Is there a proven “good” list of parts to price up somewhere - I would certainly want it to handle as much as the sim can throw at it. Budget could be (if needed) up to £3k absolute max, but preferably not if possible as i might want a bigger monitor (currently 32" 4K curved)

P.s, go for an ultrawide monitor…

I would say that you should plan to get a pc, but not yet.

The reason I say that is that SU10 may well change what is the best buy. Also, the SU10 release (not beta) should be more stable on Xbox

Certainly it may make it better to buy three smaller monitors than one wide-screen one. It may change what performance you get from different hardware.

The collapse in bitcoin and new Nvidia models are likely to change the graphics card market. China may possibly get out of Covid lockdown eventually.

So I’d say it’s probably wise to plan a move, but stick with a working Xbox for a month or two

A nice gaming PC with a HP G2 headset… you are in a different league.

Of course you should get a PC. But just like as a good padawan who builds his own lightsaber, you must build your PC yourself.
I recommend some midrange AMD Ryzen and a Radeon card with raytracing always on, like a Radeon 6600, and of course 32 GB of fast RAM.
(A very fast and good Ryzen I had for a reasonable price was the Ryzen 7 3800XT).

If you want to max out your experience, go for an NVMe drive instead of SSD…

Don’t buy a Gigabtye Z690 motherboard if you intend to install Gen 4 M.2 storage on it, I get multiple errors (doesn’t seem to be a performance impact), Gigabyte customer care have washed their hands of the issue!

If you can afford it absolutely get a PC, but keep in mind that Xbox series X already is pretty good in terms of visuals. If you need better visuals, you will at least need a rtx3070 or rx6800 or better level of card. Which may put the total cost of PC more than double the price of Xbox series X. But you will gein so much more flexibility if you care about those. Like the ability to use free mods, liveries, sceneries from flightsim.to, use other applications which interact with the sim via simconnect, better hardware mapping using fsuipc, spad.next etc.

Thats fine, i’m expecting to pay a fair bit for what i am after.

I also want to open up the world of external controls - I have the MIAP XBOX panel but I know 100% there is far more out there once you get away from the X-Box.

Three monitors would be ideal for me but maybe hold that for the future, but would like that ability to be there.

I wouldn’t go so far as to say you “must” build your own, but you will gain a lot of experience, and insight by doing so.

@DaveJK9173 If you don’t feel up to it, there are vendors out there that will build your PC for you, from parts you specify.

Scan are a safe pair of hands for that task.

Thanks, its not so much “feeling up to it” but I have been messing with parts finder sites and it seems there is practically no advantage, apart from fun factor, in a DIY build.

This was what I was looking at, no idea yet if its a good match for FS2020 though… 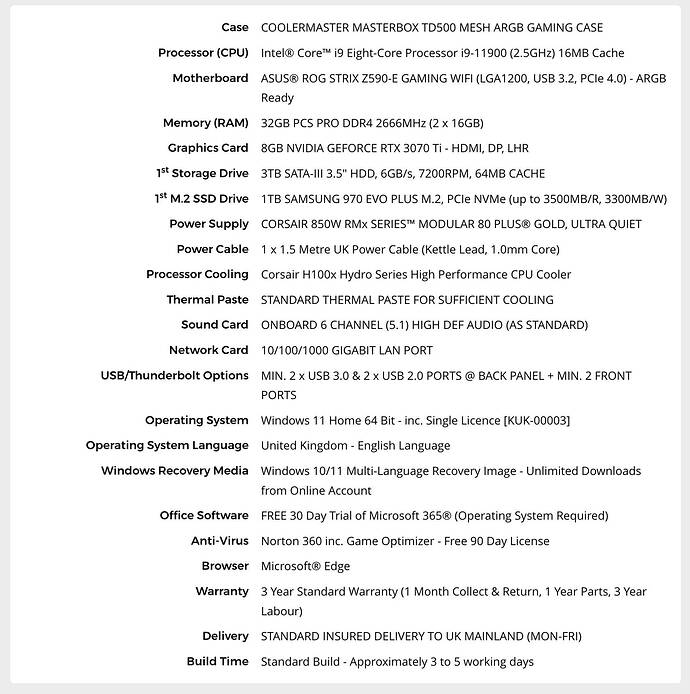 On the right track?

If it were me I would wait until the 13th gen Intel chips are out, rather than buy right now. Unless you are in a hurry, of course. Other than that, the CPU/GPU/memory, and motherboard look fine to me.

I can wait a bit but i’m not known for my patience - Once I fix on a project I tend to dive in head first.

I also recommend building your own. As others have said the 4000 series NVIDIAs are right around the corner and you will be able to get a real good 3000 series for a real good price.