I just purchased the Flying Iron Spitfire MK IX. A wonderful airplane - and what a roaring sound! First impression: excellent!

However I stumbled already over the following noob questions: 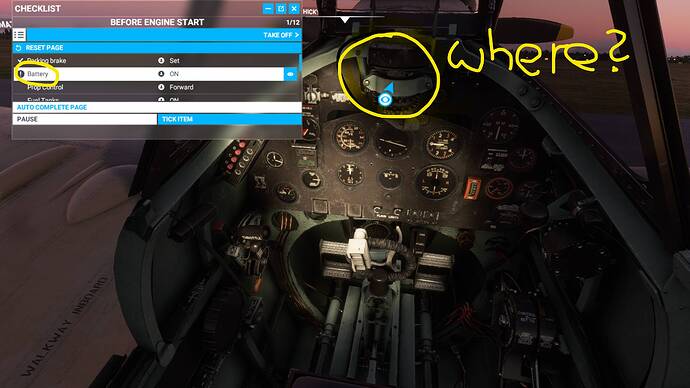 Again, a great airplane to “fly around” and enjoy the scenery!

(*) I purchased the airplane in the FS 2020 in-game marketplace, via Steam (in case that matters)

(**) I just checked again: the volts meter shows 12 volts from the very beginning (“cold and dark”), without having pressed any button - so I assume the battery switch has not yet been implemented (but where would it be anyway)? I also tried to “peek” behind the gunsight and other levers, but did not find yet any “hidden button”…

(***) Even when “auto-completing” the startup procedure the ATC menu says: “RADIO OFF - The electrical system must be turned on in order to use the radio and speak to Air Traffic Control (ATC)”

A timeless legend, an icon, a hero and arguably one of the most beautiful aircraft to have ever existed. Designed by Supermarine to be a short-range, high-performance interceptor, the Spitfire is most famous for it's pivotal role in World War II...

The manual is available under „Downloads“ on their website.

I hope that it will clarify my other questions as well

The battery switch is behind the throttle, push the throttle forward to activate. I don’t believe it ever turns the battery off, just the lights.

The radio is the device above the throttle quarant with the red buttons set it to A (B, C, or D) off is the top button

There is no parking brake per-se. There is a toggle in the controls menu for the brake lever located on the stick.

My other two questions are also (mostly) answered, in the latest changelog:

A timeless legend, an icon, a hero and arguably one of the most beautiful aircraft to have ever existed. Designed by Supermarine to be a short-range, high-performance interceptor, the Spitfire is most famous for it's pivotal role in World War II...

Aha. I had actually clicked those buttons at some point (and wondered what they were good for), but did not pay attention to any changes in the ATC menu.

Parking brake is on the back of the stick, a lever that moves sideways.

Select channel A-D on the radio box to activate ATC (or not).

I’m currently flying it around the world, with Live Weather and VFR. It is a lot of fun.

The lever is actually the brake control, a catch maintains it in the fully on position.

“With enough warmth in the coolant and oil, a flip of the parking brake catch releases the brake lever on the spade control grip and the aircraft is taxiing with minimal power. The first time I had the opportunity to fly a British aircraft with this hand operated air brake system I was skeptical about it being very effective compared to hydraulic toe brakes. Within a very few minutes I was completely won over. It is far easier to manage, particularly on run up when one has to really stand on most American fighter rudder pedals. The source of high-pressure air is controlled by the brake lever on the spade control grip, or stick. The rudder pedals modulate the distribution of pressure to the left and right main wheel brakes. If the pedals are even, equal braking is applied to both sides; as one rudder pedal is applied then more brake pressure is fed to that side. Strength of application is delivered by the hand lever on the grip. The major benefit to all this is having one’s feet and legs almost completely relaxed most of the time.”

Parking brake is on the back of the stick, a lever that moves sideways.

Ah ha ha, I think I had “clicked the stick away” (hide), in order to better find the parking brake lever somewhere in the cockpit

Yeh, all answered; The park brake does work as the aircraft holds position with it on. The left turn from thrust is a ‘realistic’ event during takeoff - just like the P-51D, but in this sim it’s terrible and almost a joke! completely UN-NEEDED. Asobo went through this with all of their tail-draggers but managed to correct all of them. This Spitfire is beautiful to look at, an absolute disaster to get airborne! I would say that it’s 25% realistic and 75% un-needed, unrealistic nonsense.

i would add this behaviour is modelled as well as present state of the software allows , the asobo cap 10 taildragger has approx 180 horsepower driving a small prop on short wide landing gear … a spitfire 9 has 1,720 horsepower going through a massive prop on long spindly landing gear very close in to the fuselage centreline … do the physics and when you think about it then it makes sense … corsair is apparently very similar and even more of a beast mode aircraft but yet to try that one

practice , practice and practice again and you will get the hang of it , it is frustrating at first but simply set the power once (half to two thirds throttle) and just let it roll and use the rest of your takeoff roll gently counteracting the swing with rudder (once you remember at what point it swings you can feed in rudder gently in advance and as speed builds you can relax the rudder ) and it will get airborne swiftly (on the ground i always do a few turns on rudder while taxiing before a flight to make sure my rudder isnt spiking )

I use the trigger on my joystick (VKBsim Gladiator II) to work the brake lever (to give it a bit of authenticity) and a ‘pinky’ button combined with the trigger to lock or release the parking brake: and, I disable the toe brakes on my pedals.
The Spifire brakes are realy just for low speed manoevering/taxiing. Don’t try braking when landing.

Takes practice, then easy to take off. If you read the manual, check that you advance power slowly and not too much boost. Also apply right rudder trim. Also observe strict crosswind limits…

Crosswind limits… Yeah that was scary landing with a strong blow.
Now I know why all those WWII airfields had triangle layouts.

Mate, I’ll agree to disagree.
I fly a Mk9 in DCS and it takes off and lands 10x better than this one(the P51D is much harder to get airborne). This model is TOO sensitive at script level and needs to be adjusted by the mod-maker. But this won’t ever happen when people/fans constantly tell others that it’s their problem. Not all of us can be ‘elites’ in games…

It is explained in the manual, and also in various „review YouTube videos“, basically:

I am a noob simulation enthusiast („re-entered flight simming with FS2020“, after a looong break since Falcon 3.0 ;)) and even I manage to lift off in a straight line.

As for the sensitivity etc. issue: comparing it with other simulations is only so much useful, unless we‘d have a real Spitfire pilot comfirm either model. But „it takes off much nicer in simulator XYZ“ is not a convincing argument for me personally.

nope i do hear ya , i’m no elite flyer

you’d one shot me in dcs

for me the DCS spit is even less forgiving than this one … i adjusted my deadzones and scaled the inputs as per a video regarding the spitfires oversensitivity and found after a lot of practice i was getting the hang of it … trouble is it was over 10 hours and in the war at 10 hours flight time they were into battle , landing in DCS is quite easy in the spit but its roll and turning is way more sensitive and erratic … as if it is never in balance in dcs

the flying iron guys are keeping an eye on things and hopefully an update may tame down some of its takeoff behaviour although i made my spit even worse for torque , engine power was too low so even at 10’000 ft it could’nt manage the 404 mph the mk9 does so i tweaked my engine cfg a touch so it now scrapes that speed but its take off swing is even more vicious now but i seem to correct it on my pedals on this one better 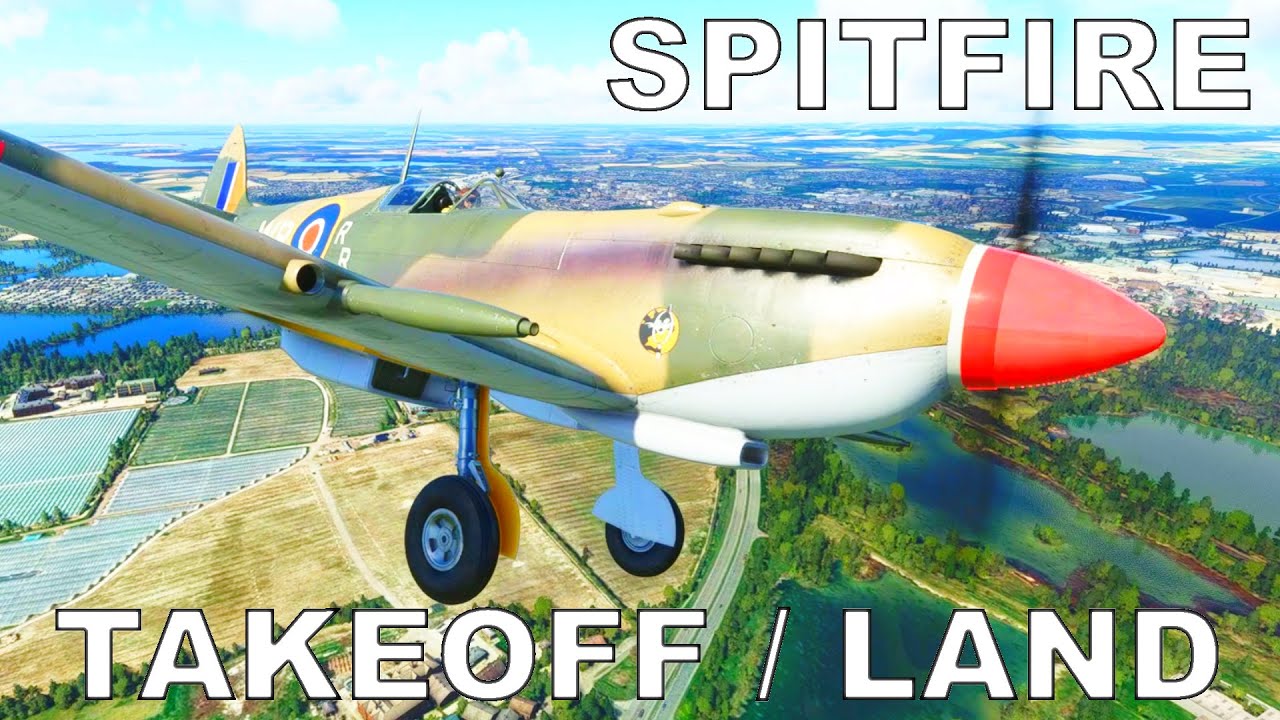 Yeah, Thanks for responding. I later found the videos after posting, not much help. As someone said “pilots would be painting successful takeoffs rather than kills on this plane.” I do fly (glider license), and an occasional 172, the torque roll is way overdone on all the planes. X Planes flight dynamics are much better, but, the graphics lack. So, here we are stuck.

[quote=“MajorOzzman, post:18, topic:388206, full:true”]
Yeah, Thanks for responding. I later found the videos after posting, not much help. As someone said “pilots would be painting successful takeoffs rather than kills on this plane.” I do fly (glider license), and an occasional 172, the torque roll is way overdone on all the planes. X Planes flight dynamics are much better, but, the graphics lack. So, here we are stuck.