Static thrust bug on multi engines (and Icon A5) found!

So we are all aware of bad takeoff performance on the DA62.

I believe to have found the bug.

I was wondering why the DA40NGX, with the same engine type was producing so much more thrust than the DA62X with 12 less horsepower. I copy pasted the engine config back and forth, the only difference being the engine placement. I discovered, that if the second engine is placed off of the centerline, the thrust efficiency of both engines drop to 0.13.

Here are the default engine position values, with 0.13 thrust efficiency, only producing 251kg of thrust

Here with the 2nd engine place 20 feet in front and 10 feet above, but on the centerline
We get an efficiency of 0.46 and 586kg of thrust

This also seams to affect the Kingair

Please upvote (and download my mods) to gain Asobo’s awareness

It seams to be connected to the “prop_advance_ratio”

How do you sleep with all these amazing maths and knowledge in your brain, dev? Voted!

Please submit a Zendesk ticket of this issue. It will likely be seen by devs faster than posting here.

So yeah, the Baron also seams to also be affected 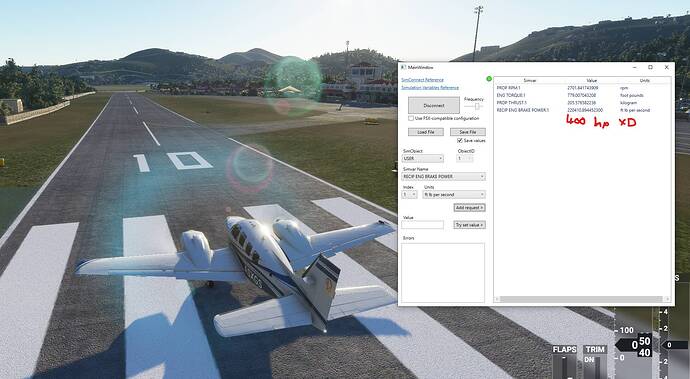 I dont have the Seminole. It has 180hp per side so it should get similar numbers to the da62

You can see the thrust (and acceleration) increase rapidly as airspeed increases.

According to the definition of the advance ratio, it should be 0 at about true airspeed=0

Thrust increasing with airspeed is okay, I would say as thrust efficiency increases compared to the static case. But that of course does not explain the dependency of the thrust efficiency with the geometric position of the prop. In the example with the DA62, you placed the prop very far away from the fuselage to get 0.46. does this value change when you get close or is it really just the question if you are on axis or not?

Btw there is a Python package to read out SimConnect variables. This makes it is quite easy to read out values and plot them.

Here are charts of thrust to airspeed. Accelerating to about 150 knots

As you can see, the engines outside of the centerlines start low, decrease and then shoot up. Where as the center positioned engines smoothly decrease in thrust.
Is that behaviour correct? not sure 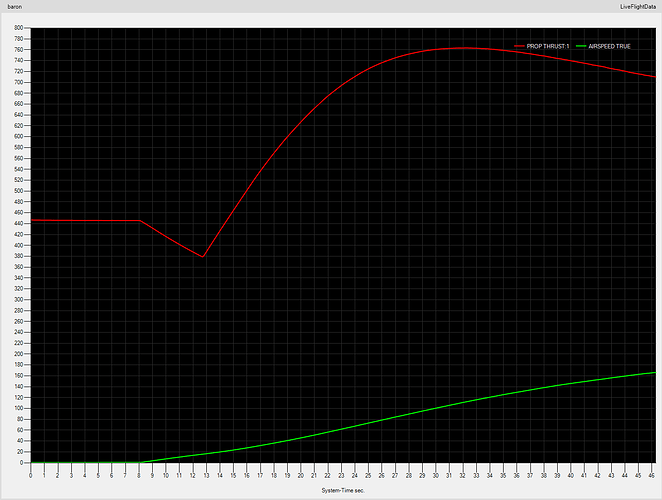 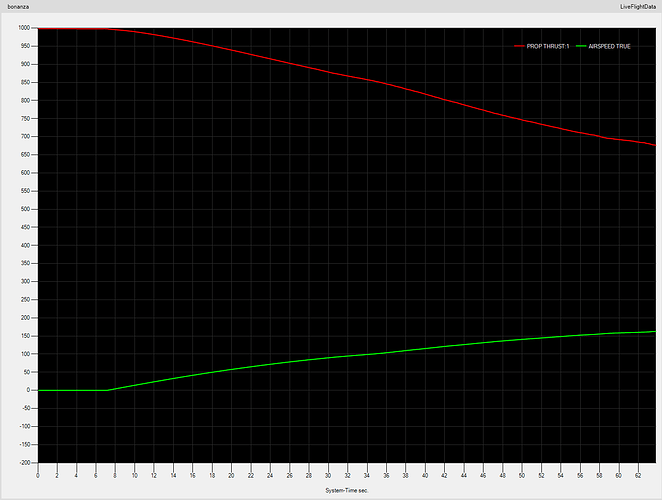 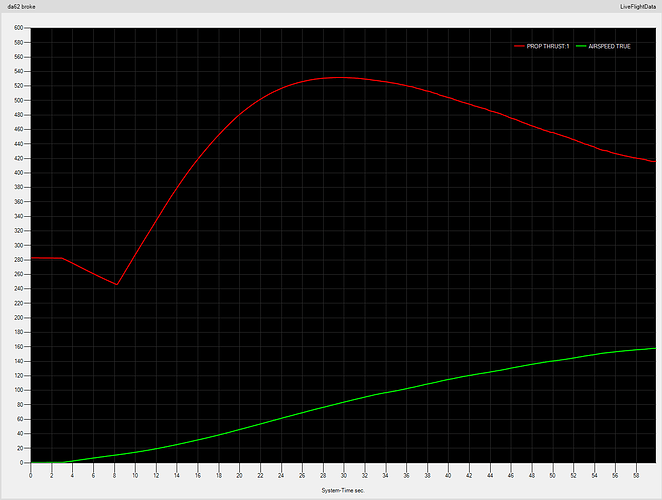 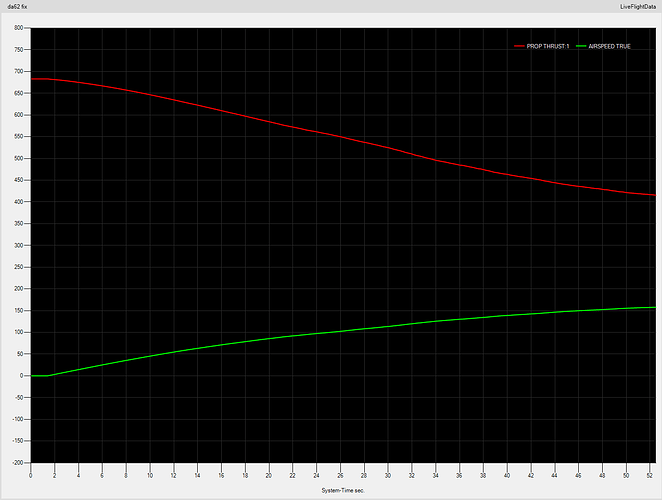 however if you look at the charts it seems to decrease?

Absolutely amazing you found out about it, it makes understandable many of the issues with turboprops.
Also the placement and number of engines does not effect their charactherestics (except pusher props due to the disrupted air)
Though i’m not a software expert of any kind, i am more than sure most of the issues with turboprops could be solved easily by developers just by adjusting these things you have discovered. Sadly the tendency is that such simple thing take months to be resolved.

1- Torque increase with altitude increase, wich should be the opposite (you apply more power as you climb)

this has nothing to do with turbine logic. they are broken aswell, yeah, but i am only talking about propeller thrust.

Yes, decreasing thrust with increasing airspeed is how it should be (with constant (shaft) power).

What I meant is the difference between static thrust and thrust of a moving aircraft. Generally, the static thrust is lower (prop is not optimized for low speed regime). This seems to be not modelled at all in the Bonanza and the center-enginge-DA62. I don’t know if this effect is modelled at all in the sim. I highly doubt that the behaviour of the stock-position DA62 and Baron reflects this transition between static and dynamic thrust. It seems more like an artifact because of this triangle-form decrease and then increase of thrust at low airspeeds. Also I would expect the transition from static thrust to dynamic thrust to take place more quickly. And of course it should be present regardlass of prop position.

So the question is now: Why does the sim come up with this thrust values for off-center enginges?

It would be helpful if you plotted airspeed vs. thrust (instead of time vs both).

I also question the RPM schedule as well for turboprops. It seems the TBM takes forever for the prop to speed up.

Yeah, prop schedule is incorrect. Videos of the real plane shows unfeathered idle RPM is around 1200-1300. In the sim it’s a lot lower.

https://youtu.be/V-z4AkMWXU4 See at 4:50 completed the start and at Idle thrust.

The graphs certainly illustrate why using differential thrust to assist turns while taxiing is so weak in the sim. Some commenters have even suspected that differential thrust isn’t modeled at all. Judging by the graphs, with the dip in thrust somewhere between 10 and 20 kt true, I wonder if this was intentionally implemented to limit yawing during the takeoff roll due to differential thrust when the two throttle levers aren’t perfectly in-sync.