Unfortunaly i have still stutters after the newest update 1.14.6.0
The Stutters happens no matter if i use low,mid,high end or ultra settings.
I thought the stutters should be fixied with this Update. And i tried a lot: set the pagine file size, energie settings, check if all my drivers and windows are up to date. yes ther are and a lot more. The Stutters happens no matter if i am on ground or i am on fl 390 and with all aircraft and at all aiports and regions.

Do you have also after the Update stutters?

It all started to go downhill after the UK update.

Yep still around Bali island, is like stutter fest

The hotfix definitely made the overall FPS experience much better for me!

Some stutters remain tough. Did a flight today from KLAX to KSAN in the CRJ. On my way I had some stutters going on, while having around 40-45 FPS. Definitely doesn’t made it unplayable though! Probably photogrammetry loading in, but who knows. No big deal.

I think Asobo did a great job with the latest patch, thank you!

Playing 4k, render scale at 70%.
Settings between high and ultra.

I did a test flight from las vegas to lax and during taxi and when taking off it was stuttering and pausing every 10 seconds and in the middle of the desert before even approaching Los Angeles I noticed my fps went down to like 15 lol. I have landed at lax many times before and even though i have my settings at 4k and 300 lod i had smooth approaches into lax while also recording video in at full 4K resolution which i still have to compare but today’s approach into lax it was stuttering and pausing a few times and my fps at the airport was like 17.

The FPS issue has largely been fixed for me but can’t complete a flight without stutters or complete sim freezes for upwards of 1-2 minutes.

I still have the stutters but they’re much less frequent than before, and only last for a couple of seconds on my approach. But as I get close to the runway, the stutters disappear so it doesn’t really affect my landing that much compared to before. FPS is much better too overall.

Had a great flight up the Columbia River Gorge and after about 30 minutes the frame rate kept dropping to the point of it seemed like 4 or 5 a second… to the point of I just quick the flight. I have a been a big fan of the sim and had no real problems until the last update and it seemed like the fix a couple days ago fixed the problem but doing a longer flight it just degraded to the point of unflyable. Come on!! 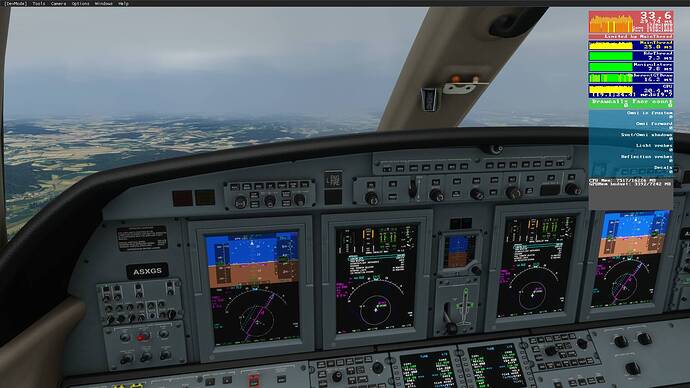 Edit: Restart of Sim and PC fixed it. Back to smooth 42FPS.

Smooth and stutter free for me, No problems.

I also have major stutters and lower framerates, particularly around Boston KBOS.

In earlier versions, I have had no trouble.

Small stutters have been there since the sim was released. Its the major slowdown stutters that render the sim unflyable that was fixed.

Also consider that the sim is always having new features added. People said there is not enough AI or the clouds need to be less pixilated. These types of fixes can eat into performance so saying it was all fine in update xyz is rather meaningless.

I developed the problem after the last update. No matter how I tweaked things it didn’t make much difference. I went from normally what was (the setting below Ultra, can’t think of it right now) all the way down to low and still bad stutters. Sooooooo, I DELETED - Japan Points of Interest, UK Points of Interest and US Points of Interest, as I’m no much interested in that any way and now I’m back up to my good setting with no problems as of all day today. And I have 5 FIPS and 3 panels running also. So right now, happy camper except for the auto pilot which still doesn’t work. Asobo needs to fix that as well. I also use 350 GBs of rolling cache which I think helps but not sure. There’s a tutorial available that demonstrates all the graphics settings each one compared with all the settings and really anything above “medium” is a waste of CPU according to that tutorial. The difference between medium and the rest is very negligible. So at medium I guess the CPU works easier and presents just as good looking experience.

Same thing until I deleted Japan, US and UK Points of Interest from the data base. Seems fine now.

Try deleting the Japan, US and UK Points of Interest. That seems to have worked for me.

after the patch, i have the same stutterng in the near of the clouds. then i switch to weather Pre-Set, i think it gives a little improvment,

Good improvement for me, very few stutters post patch, I’m happy. Not perfect, but now playable and very more smooth. I just posted this in VR thread similar to this one:

I also have the RTX 3070 with an I7 10700K, both slightly OC, and 32GB RAM. On my machine I can see a real improvement with this new patch. I also updated all, Oculus Beta flag, NVidia last drivers, etc. Yesterday I was able to fly with ASW ON locked 45fps and had very few stutters, only the usual ones when loading the scene in front of me with a rapid plane. I only use light plane VR fps friendly like the Piaggo, the DR400, the MB339, the CT Superspeed (from memory), the F15 model C, etc., an…

I believe FS2020 is no exception to the rule of all flight simulators (P3D, FSX …). It is poorly optimized for multicore processors (i.e. all processors). Obviously, 10900K owners have the advantage, who will experience less drop in performance. But, obviously, whatever the configuration, we see that there is a bottleneck CPU. It is less obvious with a “small” GPU but on the other hand if you have an RTX3080-3090 or an AMD 6800-6900xt, the results are ridiculous compared to the graphics computing capacity of these cards.