Stream Deck is it worth it?

I’m debating whether or not to get a stream deck to make use of camera views while flying. I find it quite time consuming moving around the cockpit with a mouse. Even though I have my hat switch set up for quick views it still takes a while to cycle through them to get to the view I want. It would be good to have a stream deck for custom view to make it quicker.

Any one else doing this and is it worth it?

If you own a tablet, you may take a look at ‘Touch Portal’. In my opinion the cheaper and more flexible solution. I personally don’t use it in MSFS 2020 (I fly in VR), but in other non-VR games it does a excellent job.

Interesting suggestion, I had not heard of Touch Portal before. I was poking around their website and saw that MSFS is supported, but I didn’t see where that plug-in exists. Is there another site that has the MSFS content?

Or Spad.Next, or Axis and Ohs. Either of these can be fully programmable to the Stream Deck XL or Stream Deck to give you full functionality of every system on any aircraft. For example, there are templates of a full overhead A32NX to use via Spad or A&O through the Stream Deck.

Love my steam deck but have it set up for other uses. They are incredibly functional in the sim and outside of it with profiles available for specific airplanes as well (can be used for switches, etc…).

That said, if you are looking for a way to have better views / looking about while flying. You may want to check out something like TrackIR or Tobii Eye Tracking.

I have two currently.

One Streamdeck XL on my sim PC, then a standard Streamdeck on my 2nd PC.

I highly recommend them! I couldn’t be with out them now

That said, if you are looking for a way to have better views / looking about while flying. You may want to check out something like TrackIR or Tobii Eye Tracking.

Speaking for myself, I’ve tried this and just haven’t seemed to fully buy into it. I really liked it at first, but then started to find it a bit restrictive, not allowing me to move around that freely. I found myself having to sit still, in the same spot, and just focus on moving my head.

I’ve gone away from it, then gone back and tried it again, and now am not using it. Maybe I just haven’t found the right set of controls to make it more seem-less. For example, I know you can just turn it off or “pause” it while you do something else, and then come back and re-activate it. So part of me thinks I just haven’t found my ideal settings yet.

I have the Smooth Track / Open Track Android app running on an extra smartphone. It certainly works as advertised, I just haven’t really gotten comfortable yet.

Really, I think of all the things in the game I wish I had a better system for is controlling views. I’m a little clunky when trying to find something. The YouTubers seem to have this down much better than I.

If you’re getting a StreamDeck and it’s in your budget then I highly recommend to get the XL instead of the standard one. Believe me you can never have too many buttons (I bought the standard first and regretted that very soon, after which I bought another XL

), and there are so many awesome profiles for AAO that are designed to only work with the XL. Also, the LCDs on the XL are higher resolution than the ones on the standard so all the button icons / gauges look so much nicer…

I have a Stream Deck and haven’t tried it with MFS yet. But certainly seems like it could it would work. I just downloaded Flight Tracker for it and will play around with it.

I have a HOTAS and have a few views programed into a few binds. I also have a Corsair Gaming Keyboard which has six programable buttons on the left of the keyboard. I have one of them programmed to take photos, which is much easier than ALT+F1 to use NVIDIA photo app.

On the keyboard for those six buttons, you can record macros and do whatever combination and number you key entries you want.

So a keyboard can also be used. I have the Corsair K57 RGB Wireless keyboard. It’s a nice wireless keyboard, but when using RGB, you do have to charge it frequently.

A central part of my setup and I have two. The 32 button XL and the 15 button Mk 2 and both are tremendous. There seems to be two schools of implementation that are common. If the buttons are set up for info, for instance some occasionally used switch position, then all they will do is essentially look pretty. Second school has functions tied to the buttons which are fabulous and powerful too. Things such as transponder, radio and nav buttons which will let you tune equipment easily and without recourse to your desktop rodent. You can build a powerful profile from others by cut and paste, so you don’t have to be a confident programmer and the Streamdeck is something that can change, grow and evolve with your increasing confidence.

Go and get one. I have yet to see anybody that thinks it to be a waste of resources in time, effort or money.

If you only care to use Stream Deck to switch between camera views, the 15-key version should be more than sufficient but it’s an overkill. A programmable macro keypad of 6-12 keys at $30 (like the ones they sell at Aliexpress) should do the same job at a much lower price.

If you care to also control aircraft systems, the simple answer is “yes”. I have both the 15-key and the 32-key versions. Have set them up with spad.next. Using them with WT CJ4 or the Kodiak is a blast. Even if you don’t want to buy 3rd party software such as spad/AAO or program Stream Deck yourself, you can still use it with free addons such as Flight Tracker which have lots of preconfigured profiles.

Stream Decks are not cheap, but they are super stable and there is no limit to the things they can do. Plus they can be used to automate lots of other non-MSFS stuff.

If you can only get one of them, I’d say to go for the XL version. It may be significantly more expensive but it’s worth it. For more complex aircraft with FMS’s etc, those 32 keys can be used to map literally every MCDU button. Obviously the same can be done with the SD 15-key version, but there’ll be much back and forth between screens. On the other hand if you mainly care to fly simple GA aircraft, the SD version should be just fine.

Just out of curiosity, did you run it out of the box “as is” or adjust the settings / calibrations?

If you are going to give it a try, take a look at this thread for some fine tuning settings;

A lot of people say configuring TrackIR is a personal thing which depends on personal preferences and on screen size and distance which is true. However, I found a profile made originally for DCS that works perfectly with Flight Simulator with almost no modification needed. In combination with of one key of Custom Camera view in addition to keys for Pause and another one for Center TrackIR, I achieved an almost close experience to VR. The core points are: 1) Good curve 2) One custom camera bu…

And then with regards to button mappings, yes, you want “re-center” to be mapped as one, and pause as another.

I have an alpha yolk and have the buttons mapped on it for those functions but take a look at the settings used in the thread for smoother movement.

Thanks for that. I’ll review the suggestions.

I just tried SmoothTrack again earlier today to see what I thought.

I did update the curves to help me get more viewing angle with less head movement, and tried to set some dead zones to reduce “noise” when I wanted to stare in one direction, but they are certainly not optimal. Trying to click MCDU buttons without my view drifting or bouncing around is frustrating.

I didn’t realise how expensive they are. I’m thinking the 15 button one would be enough for what I would use it for. Personally I quite like using the buttons in the cockpit for the instruments. Its more realistic than using the Stream Deck for everything. For me I prefer looking at the cockpit layout on screen which is more realistic than solely looking at a Stream Deck.

That said, I suppose you could argue that pushing a button is more realistic than clicking a button on a mouse.

I will definitely buy one and give it a go but don’t want to regret not getting the XL version.

I did update the curves to help me get more viewing angle with less head movement, and tried to set some dead zones to reduce “noise” when I wanted to stare in one direction, but they are certainly not optimal. Trying to click MCDU buttons without my view drifting or bouncing around is frustrating.

I have a “Pause TrackIR” button set up on my HOTAS. Whenever I want to click a small button, I look at it, pause TrackIR, press the button, then un-pause.

I’ve been flying with TrackIR for 20 years and (barring VR) won’t fly without it.

I too, have a Stream Deck and wouldn’t be without it… although admittedly I use it for many things unrelated to the MSFS. 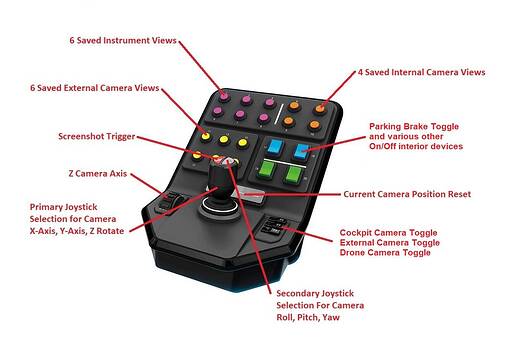 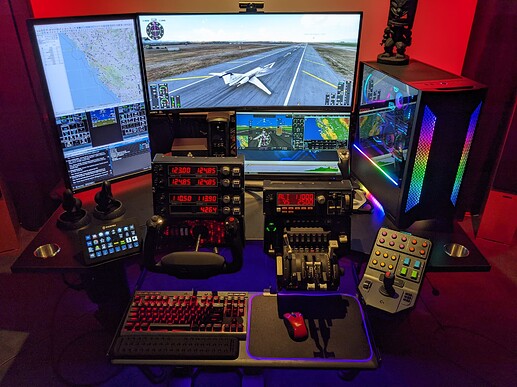 Like your setup. I’ve seen those I think they were originally made for farming simulator. As I also use my desk for work I think that may be a bit bulky though a good choice if it’s always on your desk. What other things do you use the stream deck for? Do you only use it for MSFS when you are flying?

Fantastic setup you have! I may have to look into Stream Deck.

That system is pretty much dedicated to Flight Simulation. I have another system on the left of the room for day-to-day computing and some Audio production. But while using the Flight Sim, I have a few pages of Stream Deck buttons set up for home automation, music, system info, etc…

For example, I have some great background music for when I’m flying, and I can kick off and navigate that playlist with the touch of a button, and all the audio transport controls, volume, Audio source switching, etc… can be run from that particular screen as well. My lighting and other ergonomic conditions are also controlled by the Stream Deck.

I put off buying one for a long time, thinking… “Hey, I’m not a streamer, so how good could this really be?” But ultimately once you have one, there are hundreds of other things you find to use it for. You may not need the 32 button XL model because you can create so many pages. In fact, there are times I would like to have the little 6 button jobbie on my nightstand to control other things in the house… but it needs to be hooked up to a computer.

If you’re waffling on the idea of getting one, I’ll refer to the words of Nike… Just Do It.

With respect to the Farming Simulator Panel (A.K.A. Heavy Equipment Panel)… it’s absolutely great for camera controls of all types. Buttons to save views on the fly (pun intended)… Interior, exterior, whatever. And since I’m not at all a fan of the Xbox Controller, the joystick is… well… a Joy to use for controlling the Drone Camera.