The new Aerosoft CRJ has taught me one main concern on flying study level. How to fly them with only ONE pilot. There is a reason these planes have two pilots in real life. I am having problems keeping up with ATC barking at me, following procedure, and just making sure I am following the flight path on takeoff. I prefer not to go to auto pilot just after takeoff. I prefer not to use the AI with a study level because its not realistic or even good with study level. I need a real 1st officer to handle the coms and basic task. When will the in cockpit multi-player be ready?

FS2Crew is working on a virtual FO for the CRJ but it isn’t ready yet. In the meantime, you just have to stay ahead of the aircraft. Set as much up ahead of time as you can (especially on the ground). After loading the FMS preload any nav frequencies that you know you will need ahead of time. One thing that is especially helpful is to brief the takeoff and departure out loud as if you were talking to your FO. Doing that forces you to understand ahead of time what you expect to happen so you can be proactive instead of reactive. You should also brief the arrival and approach out loud for the same reason. If you get behind the aircraft you will make mistakes, so don’t allow that to happen. Whenever you aren’t immediately doing something, you should be thinking about what comes next, what you will need to do, and if there are things you can accomplish in that free moment so you don’t have to do them later when it gets busy. Also, the shorter the flight, the harder it is to stay in front of the aircraft. I would suggest avoiding flights of less than an hour of air time until you get the hang of things. Flights of 1.5-2.0 hours of flying time will allow for a much gentler introduction to learning to fly the CRJ.

You know you can assign the radio coms to AI right?

The new Aerosoft CRJ has taught me one main concern on flying study level. How to fly them with only ONE pilot. There is a reason these planes have two pilots in real life. I am having problems keeping up with ATC barking at me, following procedure, and just making sure I am following the flight path on takeoff. I prefer not to go to auto pilot just after takeoff.

The workload during single pilot ops is very high and to reduce it, you maximize the use of the equipment, which means that you should use the AP as soon as possible in a high workload scenario.

Btw, flight instructors love it during the real sim checkflights to increase the workload after e.g. an engine failure to order one pilot to become incapacitated.

Even worse is the subtle incapacitation where there’s no immediate sign that the other guy isn’t responding/acting as required.

Btw. The Aerosoft CRJ is not a study level aircraft, not even Aerosoft claims that it is.

Not true. You must use a native MSFS .pln and load that the same way you load a default aircraft, Then load the CRJ FP in the CDU under flightplan menu. It works 100%. So you must be doing it wrong! 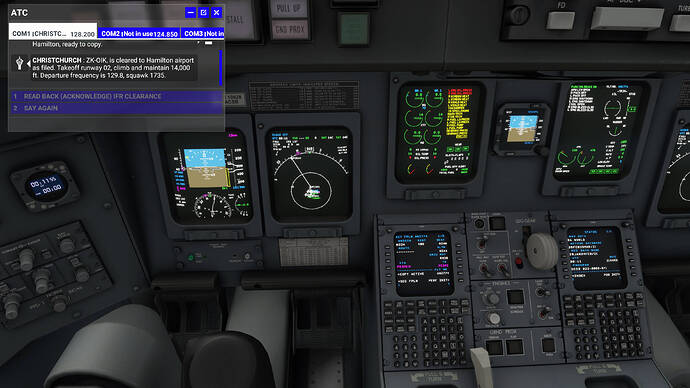 Nah, I’m not doing that, and I doubt many people are. I load the FMC manually, and don’t use the base ATC. It’s not “doing it wrong”, it’s doing it the way I choose to.

Nah, I’m not doing that, and I doubt many people are.

Then more reason to learn the procedures and do the introduction flights that come with the manual! It’s not a click and fly aircraft. And save the workload and use Simbrief. It will format all your flight plans and even provide a pdf of everything with 1 mouse click.

It’s not “doing it wrong”, it’s doing it the way I choose to.

And you contradict what you wrote above

Where do you get the impression that I think this is a click and fly aircraft? I use SimBrief, but I prefer to manually input the data into the FMC. I don’t like to upload a plan from the World map and the plane on 2 different nav systems because they can sometimes cause a conflict when the Nav data doesn’t match up.

Ah, the sim instructor muting your copilot momentarily while telling you to ignore what’s about to happen next!

Going back to the original intent of the OP, shared cockpit is a feature that i’ve been waiting for a long time.

Got some good news: In the last Live Q&A, they had announced that a team was going to work on the feature, with only some parts of the team actively working on it. They also mentioned the difficulty relied in exposing the network and sim variables to be shared, as well as reworking the network to be able to pass all that info. They did not provide any timeline for the feature.

If you feel like showing Asobo that we feel that feature is important and they should put resources into it, vote on the wishlist thread below

Thank you for reading my post and answering with what I asked about. My first comment was “there is a reason most airliners have two pilots”. Even with going to autopilot right after takeoff the work load can be high. I am not clicking real buttons but working with a mouse, keyboard, joystick and throttle while trying to ignore the Asobo ATC. I am looking for realistic and not AI or any 3rd party software but a 1st officer like they have in real life. Multiplayer cockpit.

I prefer not to go to auto pilot just after takeoff.

Actually, that’s pretty much SOP for most airlines. Not that they don’t train to fly manually, not doing that can kill people, but AP use is the norm, not the exception.

Unfortunately this is a limitation of the single pilot environment in msfs. I used to practice procedures with the PMDG in FSX and you certainly struggle with some things.

The workload on an easy/normal departure on commercial ops generally isn’t that bad but the whole point of a second pilot is for monitoring the other one pretty much (something not needed in msfs really as things tend to work as expected…most of the time, and there’s no actual jeopardy involved).

I would just say use active pause for particularly high workload situations if you’re trying to fly manually, change a radio and set the altimeter all at once. It’s not cheating although I can see it being immersion breaking.

Hopefully some other reliable programs or native support comes for multi-crew, especially with study level aircraft