Please, could you give me how to vote for it ?

top of the thread - the blue button left. after voting says voted instead of vote and the counter goes 1 up

there were even much less who complained when yesterday the x-box server totally failed. so this is quite a poor argument for them. but lets hope they finally search for the bug and find a way to correct it. sadly msfs has no debug mode so we cannot send them logs about what is going on when the sim stalls …

Just posted some examples in another thread, but for the sake of completeness:
Did a flight in UK (to EGSF) and the stutters started. Usually getting 50fps at that location, now I got 15fps due to CoherentGTDraw.
Disabled weather, set daytime, disabled all online functionality (no AI traffic either), nothing changed the CoherentGTDraw value.
Also tried disabling VFR map or ATC window.
Didn’t have this exact issue yet, I only had some occurrences of stutters that came for 20-30s and then got smooth again, this time the performance remained this bad. 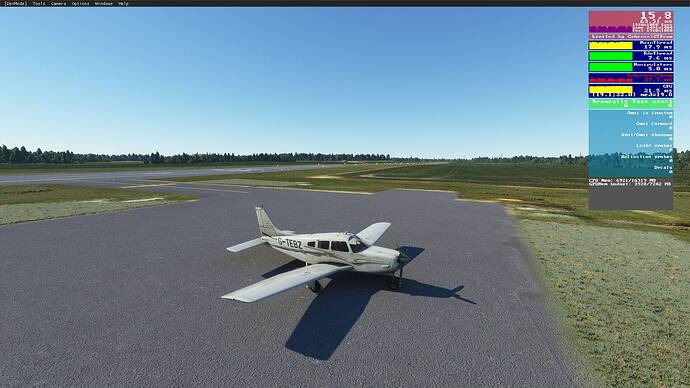 Went back to main menu, loaded at the same position with the same setup - 50fps, CoherentGTDraw is negligible. 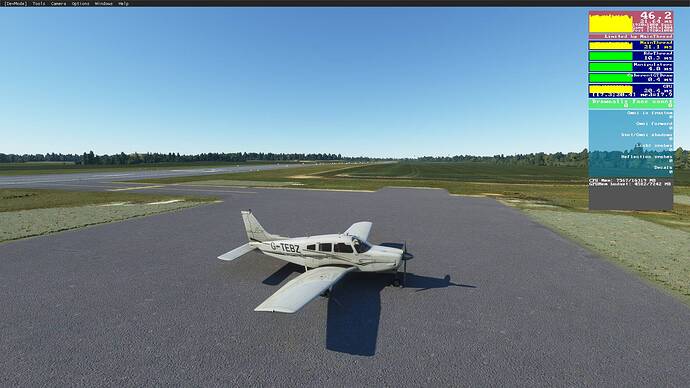 You can post here too, already at over 600 votes.

That was done too

Same here with the persistant pauses. I don’t get a stutter, I get a full on multi-second pause followed closely by a quicker pause. Everything is unresponsive, but I don’t call it a freeze as the sound and ATC continue as normal. It’s almost as if Active Pause is turning itself on every 30 seconds or so. At these points GPU usage drops to 0%

I’ve gone through all the troubleshooting tips and it makes no difference. It doesn’t happen in every flight, but it is absolutely worse and more repeatable in certain areas. However, even in those areas where it is not happening constantly, I will get at least a 1-2 second pause just before touchdown when landing.

As an aside, since the last update London is now unflyable for me. Along with the persistant stutter the performance drops to 5-8fps in clear skies and 3fps with rain in Live mode.

Please ignore the standard of flying in the video. I was actually my first time trying out one of the jetliners so I happed to be recording it.

I used to have no issue on my 1070 running 4K and high settings. Typically around 30 FPS. Since the update I’ve noticed issues as well, on low settings at 1080p I get roughly 4-6 FPS, 4K on ultra I get the same 4-6 FPS. Seems like nothing I can do to fix this except blink very fast and pretend I can’t see the stutters.

So I seem to have resolved some of the issues by relocating and emptying my community folder. Didn’t have anything weird in there though, just a plane or two, some liveries, and a few free airports. I also noticed I had a bunch of itemized content updates in the game as well. Not sure which fixed it, but now I’m back up and running smoothly, for now at least!

Post update (1.13.16.0) MSFS now used a DXGI swap chain which allows for (actually designed for) a frame rate unthrottled by vsync but this has the side effect of allowing screen tearing to be observed. This was a design change by Asobo.

This has been rattling around in my brain since the complaints of stutters and general performance drops began after the update. I have just done a bunch of digging and maybe someone with more experience with the DXGI can wade in here.

It seems that the SwapBuffers call can cause a significant latency in the runtime when combined with certain GPU drivers. I have seen anything from 100ms up to 2 sec pauses in getting a response from the dll. These issues go all the way back to early WDDM drivers (2.0 - up).

Is it possible we are seeing something similar here?

Edit:
The more I think about this the more reasonable it starts to sound. The fact that most users with this affliction have noted a significant drop in both CPU and GPU activity during the stutters would indicate that the program is waiting for something to happen. When the swapBuffers bug occurs the runtime seems to just nod off for a moment. Request goes in… dead air… response comes back and all continues as normal.

I see you have the JF Arrow. Make you you turn off the Ipad thing using the little white button on its right side. You’ll see a 10fps increase in frames most likely. Stutters will still be there in certain areas, but just as a head up about the JustFlight ipad thing, it does help to turn it off when its not being actively used.

I know, thanks, and this will be fixed in the update anyway, but it has nothing to do with the performance issues of the sim, they appear on stock aircraft as well.

Correct, I still am getting dreadful stutters. I have crashed to desktop almost every flight as well. It’s unacceptable.

Here too, but I am not sure what update introduced the stutters, pauses and instability I am experiencing even in remote areas where things used to be smooth and stable.

I was flying RJTT to RJFF I just rage quit on it. I thought I could persevere but a simple 90 minute flight was taking over 2 hours and became so slow and unflyable I lost it. It’s the worst its ever been and my setting were fine until recent updates. Shame because my TCA joystick and throttle showed up yesterday too.

I take it back… stutters are back… just flew in Hawaii and no issues there. Flying in Houston is a slideshow nightmare.

I’ve been tearing my hair out trying to figure out why my game performance has fallen off a cliff lately. 3700X, 16GB RAM, RTX 3080 - flew into Calgary and my fps was anywhere from 10-20, and completely unplayable (not to mention the stutters). I looked down at my PC case and both my CPU and GPU fans had stopped due to the fact they were cold; GPU usage was non-existant and CPU usage didn’t even have a single core pegged at 100% (max was maybe 60% load). Game’s installed to an NVME drive with plenty of space, and wasn’t being utilized during the flight at all (so no page file usage).

To make matters worse, it looks like this issue isn’t being given the attention it needs… I’m completely at a loss as to what to do other than to contact MS for a full refund (thankfully this is only a relatively new purchase). I feel genuinely sorry for those that are experiencing this and don’t have that option, as the game is completely unplayable as it is. Perhaps Asobo will give affected players a complementary CRJ for their troubles? And perhaps pigs might fly?

Welcome to the forum @Noodlefu
I appreciate the frustration.

To make matters worse, it looks like this issue isn’t being given the attention it needs…

It has been two days since FS had anything to say on the subject.

Hi everyone, the team is aware of the issues currently impacting performance. We will update this thread as soon as we have more information to share. Thank you for your feedback and patience while we’re working on these issues. Related topics:

I think it is safe to say that although some significant geographical bugs have cropped up that can and do grind the sim to a halt in specific locations, it must be remembered that the “general performance drop off” seems to be limited to a relatively small number of users.

Because of the noise in here one might assume that the majority have been affected. In reality, the forum (about 80,000 members) is a small but representative sample of the community. About 0.1% (+/- 800 votes) of those members have indicated, through the voting system, that they are affected by this issue. I know that not everyone remembers to vote when they post in a bug thread and as such that may only represent half of the thread participants actually experiencing issues. It is also possible that only half the members are even aware of the bug section being as we see so many posts about bugs in the discussion pages. So lets double that again. That puts us at 0.4% of our forum friends are talking about this problem.

Don’t take this as saying that it is isolated to a handful, even though that IS what the data shows. The point I am making is that when trying to debug a problem in a complex piece of software, the easily recreated bugs that affect everyone are a breeze when compared to an issue that, seemingly, randomly affects a tiny percentage of the overall and only a miniscule number of those affected are utilizing the reporting tools given us to give detailed reports/descriptions to give the developers a fighting chance to find the problem.

Far too many posts about “broken”, “unflyable”, “piece of ____” MSFS, by users that don’t even know what a ZENDESK is. Not nearly enough posts describing the problem IN DETAIL. That is a bit harsh. I know many have placed their Zendesk Tickets but according to the developers many of those tickets simply say, “I used to get 60fps and now I only get 25fps. The last update broke the sim.”

We all know that a mechanic cannot fix your car over the phone. They need hands on. They need to hear that grinding noise themselves to be able to find the problem. I hate all the car analogies on this forum but this one works. Software developers cannot fix your issue without being able to duplicate it on their system. They can ONLY do that by recreating your computer and setting up the exact same parameters.

I know it is hard when the frustration builds, but without the cold analytical approach of a computer we cannot resolve these problems. I suggest the following…