Stutter and Stop at 10FPS introduced with WorldUpdate3 still there with 1.14.6.0

was never seen before world update 3 - and nothing else hardware/software/settings changed.

this way the simulator isn’t playable for me until asobo fixes this issue now finally weeks after introducing it.

P.S. IF YOU HAVE SIMILAR PROBLEMS PLEASE UPVOTE THE POST SO ASOBO FINALLY ADRESSES THE THING

edit 1: did some more tests. turned off online functions and deleted both chaches. and no - didn’t help. the whole thing is a fundamental bug in the programming that was introduced with world update 3. and i strongly doubt that this only affects ‘some users’.

edit 2: of course i know that this computer is a real dinosaur - but until world update 3 msfs ran wonderfully smooth at resolutions up to 3200x1800 and graphics settings high. and you can clearly see in the taskmanager screens how suddenly for no reason cpu load on most cores ramps up a lot and then both cpu and gpu load drop to almost idle. after 10-60 seconds it recovers again and shortly after that it collapses again. this happens a few times in a row until this special point (e.g. a few kilometers before 08L EDDM) is overcome. after that again it runs completely normal. and as seen here in the thread it also affects computers with the latest cpu (amd or intel) and graphics card (amd or nvidia) up to a nvidia rtx 3090. first three screens are while anything is fine - last three screens when the stutter has started. 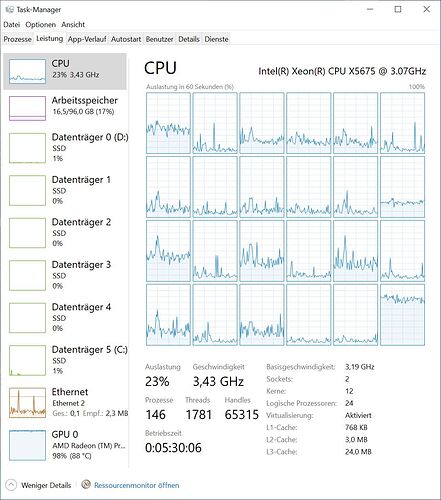 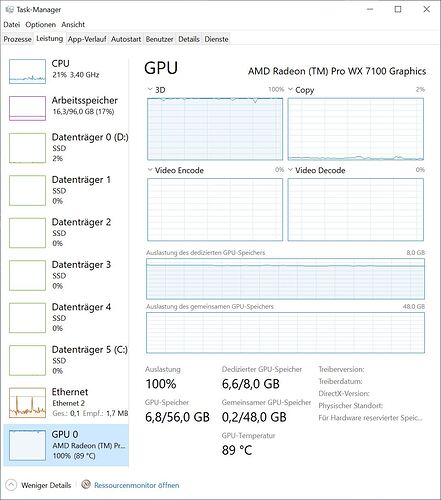 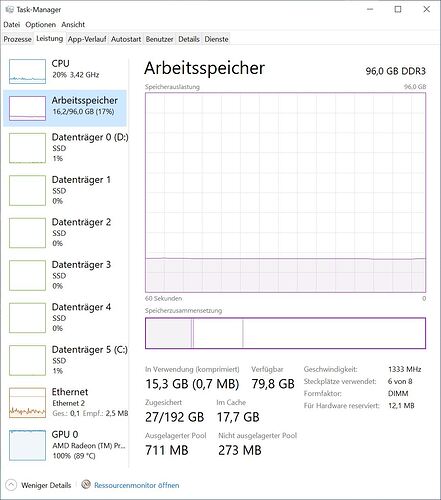 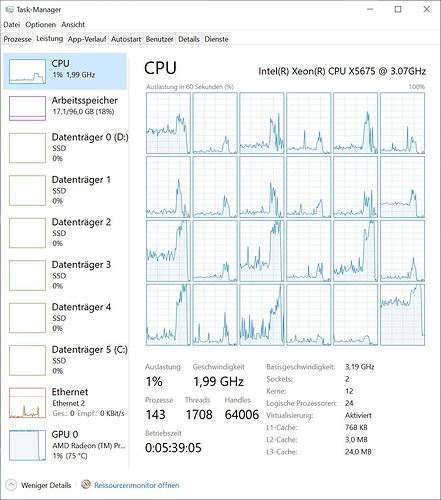 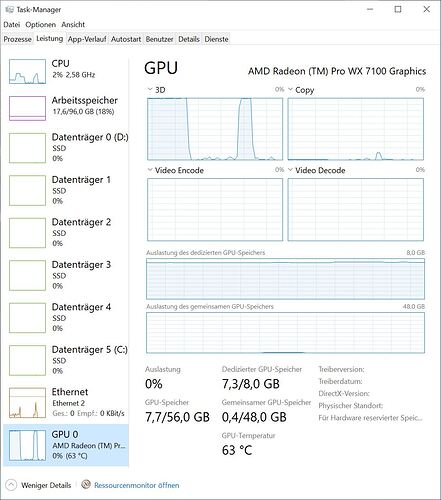 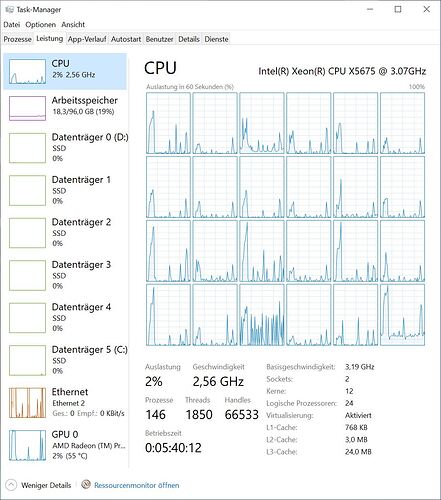 I notice stutter after this update immediately in screen Menu. Navigating between menu feels laggy and my FPS counter shows 5-20fps.

Sometimes, go to World Map recover FPS back to 30fps again (I cap FPS to 30fps via Nvidia cpanel).

Flying in some cities (which I doubt these area are photogrammetry or not) in South-East Asia (like I usually do) gives me more stutter and fps drop 20-25 fps (usually 26-30 fps).

No setting hasn’t been changed.

The patch fixes stutter issue in Screen Menu.
FPS performance when playing is improved.
Some short stutters remain (while entering high populated city from rural area), but at least it can always recover to 30 FPS again (which I cap FPS to 30fps via Nvidia cpanel).

I’m having similar problems here. I realized that for performance to drop you go through a specific place. As if a quadrant is defective. Even if the place doesn’t have a lot of graphics to be loaded.

I made a video to be able to explain better. 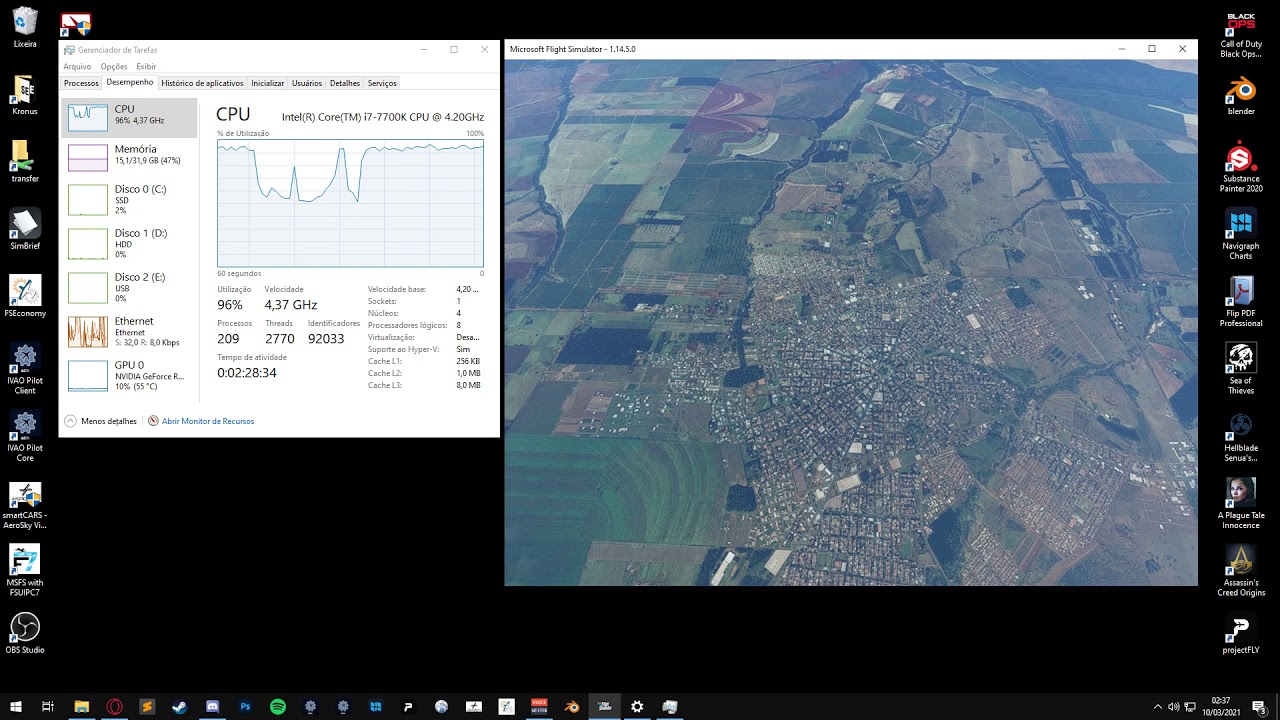 Exactly same thing I have mentionned in an other post

I do not understand how FPS can drop like that when you only go forward and backward in an empty zone like that, if someone from Asobo can explain I would be very grateful [Microsoft Flight Simulator - strange FPS drop] 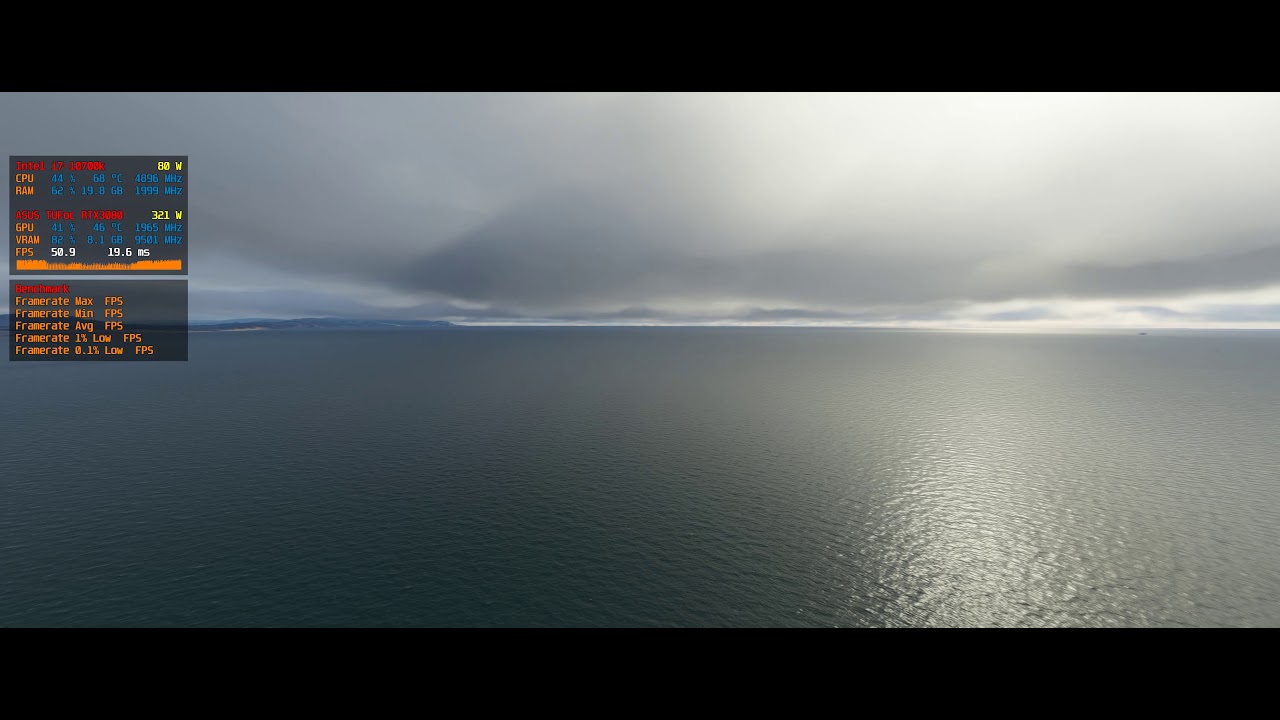 yep this is both very similar to my findings - it depends on ‘special spots’ and they do not have to be very complex.

when it happens to me my gpu was as normal at about 100% and one of the cpu kernels at about 80%. then all of a sudden the cpu load falls to about 0-10% and the gpu load to 10-20%. and the sim fully stops (often displaying 10fps). after about 30-60 seconds it starts runiing for 1-5 seconds. then again fully stops. this happens often 5-10 times then sometimes anything goes back to normal - sometimes it does not recover at all.

This “sim” is a joke and us consumers are the punchline. In this update they have destroyed performance, added almost nothing of value, and the only good thing about the “sim”, the A32NX is now broken. Just tried to fly to Lanarca from Copenhagen, poor FPS, my imported SimBrief flight plan got broken by the “sim”, stutters and freezing, then finally I get to Lanarca and the ILS is wayyy too high LOL. They need to hire a different studio to develop the actual mechanics of the “sim”, and task Asobo with graphics only, because that is all they have demonstrated that they are capable of. Absolute joke.

Same issue here, from 30/40 FPS down to 10/12 FPS in an instant. Was during approach on KSLC with the default 747. Empty community folder, no payware. All default.

i have also stutters and poor fps. 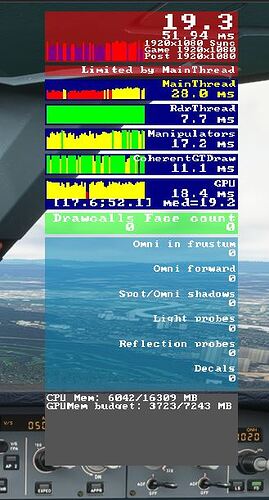 Check out this thread for more details (Limited by coherentGTdraw); try turning off VFR map (and removing from the tool bar), if that doesn’t help, same with the ATC panel. Not a guaranteed fix, but both these have been demonstrated as causes of this problem.

thanx. but turning off vfr-map and deleting from toolbar does not change anything. and as i said it all started with world update 3.

here too, was really hoping the simupdate would fix this problem, introduced on UK update, seems even worse now, im getting 6-14fps in airports… massive stutters on approach… all with a 3090 an a 10core cpu?!! This sim has literally cost me thousands, and its unusable. My GPU usage is constantly tanking, so when was 6-14 was about 20% usage, external view (in the cruise) is the only time it goes up to 98%, and no matter what usage is at any time, its usually half inside the cockpit

having the same problem, performance is crippled. Lagging in game menu. 10fps

Same problem here. Never had any stutter problem until now, after Sim Update 3. Issue appearing during a very simple traffic pattern , during approach, with a Cessna 152. FPS dropping down dramatically. Then things get good again. RTX 3090, I7 10700K, 32gb RAM

No issues here. Performance seems better for me in all the places things I’ve tried. Here I am in the Savage Cup getting little to know frame drops. I have VSync turned on with a 75hz monitor. This is about as smoother as I’ve seen the sim run. It’s finally utilizing my GPU more.

Edit: I’m thinking mods are most people’s problems. I loaded into an airport that I had a mod installed for and the performance was bad at 15 FPS. Removed it and everything is good there now.

Same here, 5-10 fps while flying low over German-landscape. If you fly higher, it becomes better, but before last Update, it was much morre smoother. Please fix that issue, the game is unflyable at this stage.

Frame rates are great and my sim has less stutters now. I reset my settings to high end.

Just updated flew the C172 with Syn Vision on for a change and no stutters like I have been seeing, Running actually super smooth no matter what I do.

I reset my graphics settings to high end from custom. Same or better frame rates with less stutters