What in this update broke the fps?

Totally predictable over certain areas
4 of my 6 cores go 100% and FPS drops from 60 FPS down to 20ish. And after I fly past the area it goes straight back to 60fps

But I’m not seeing any disk reading or internet traffic!

SMT off was the biggest and made a noticeable difference in the FPS, especially in more CPU bound situations of Flight Simulator, although it may hurt performance in other multithreaded apps.

PBO enabled may help a little. I tried tinkering with a couple of overclocking profiles which I don’t have handy at the moment, but I’m most often GPU bound with the 5900x and RTX 3090, so I’m not sure overclocking does much more than produce a bit more heat and instability. But nudging the clocks on the 3090 gives a couple of extra frames per second as a result. Instead, there are some discussions on here you could dig up about undervolting and focusing on the multipliers, locked across the cores, or adjusting particular cores that Flight Simulator is using. I haven’t had time to tinker with that yet though.

I have experienced stutter in some certain areas. Most of those areas are photogrammetry area. I saw a GPU usage drops from 90 - 100% to 30 - 50% when the FPS starts dropping with stutters.

Cheers! Thanks. I have been Mainthread limited with the same setup.

Can you maybe post your settings with print screens in this thread? I have a similar system, but can’t get it to run without stutters. I‘d like to test your settings. Thx

For anyone looking for more on stutters, significant FPS drops and related, there are at least 7 other similar threads on this (below). Make sure you vote on the top two and submit a ticket

Earlier today a user posted a severe problem during a flight from KORD to KATL. Towards the end of the flight, the FPS dropped to about 2 or 3 seconds per frame making MSFS unusable. The user provided enough info about the flight for me to try it. I encountered the same performance drop near the same place. My screen was updating like a slow slide show. The decrease in FPS was almost instantaneous, no earlier FPS degradation. I’m seeing many posts describing the poor performance since the updat…

If like myself and from what I can gather lots of other users are suffering with a huge downgrade in performance, smoothness and FPS after today’s update, despite the community folder being empty, then please submit a ticket using the following link: Submit a request – Microsoft Flight Simulator Support The more of us do this, the sooner we can hope they will address it.

Can we get official comment regarding a hotfix? General Discussion

Can we get a word on whether or not a hotfix is in the works? Please don’t leave the community hanging until next Sim Update. We need a hotfix which addresses the following: FPS issues. Reduced tree LOD. World map performance. Talk to us. Please tell us you’re planning a hotfix.

here is a stutter fix that worked for me - fixed terrible performance in VR in highly dense scenery… YMMV good luck!

This week’s development update has been released: Use this thread for discussion of the latest Dev Update.

Stutter and Stop at 10FPS introduced with WorldUpdate3 still there with 1.14.5.0 Performance, Graphics & CTDs

Stutter and Stop at 10FPS introduced with WorldUpdate3 still there with 1.14.5.0 cpu load goes down to about 0-5% and gpu to about 10-20% mostly short before landing e.g. EDDM 08L does not change if community folder is empty does not change when aerosoft EDDM is uninstalled was never seen before world update 3 - and nothing else hardware/software/settings changed. this way the simulator isn’t playable for me until asobo fixes this issue now finally weeks after introducing it. and yes - i al…

If I immediately go to the World Map as soon as the home menu appears, when I select a departure location, my FPS drops to 12fps, if I proceed with the flight, the FPS remains sub 20fps. However, if I wait 10 seconds before going to the World Map (when the sim first loads), or if I exit the world map, and re-enter, the FPS remains normal. Edit: This may have a bearing on the latest 1.14.5 FPS issue. I can do this consistently every time I run the sim. It seems that there is some house keepin…

Noticed the same behaviour after latest update - occasional FPS drops from 50-60 to low 20s with stutters. Even had one CTD without any error message. Before the update the sim run great. I clear the community folder before each update. The only thing not updated are the GPU drivers (one version behind), I tend to update them after some time passes, when there are no significant issues with the newest drivers.

To all the folks saying “fix your s**t yourself, sim works fine for me”, take note that amount of possible PC hardware (and software/driver) configurations is so massive that the fact they don’t have any issues doesn’t mean other folks are as lucky. Especially with so complex software as a flight sim which streams lots of its data from the cloud. There are so many possible points of failure here many don’t even imagine…

Would be interesting to know what kind of hardware specs QA is testing with and which servers.

My RTX3070, 5600X, 32GB RAM and 1TB M.2 drive should be up to running this sim at 1080 and it ran great up until WU3. Things have gone downhill considerably since and SU3 has completely screwed it up.

I’ve deleted all my mods and addons to exclude any of them and had a play with my virtual RAM settings to no avail.

FPS seems to go from 60 down to 20 fairly randomly, though particularly at airports and around photogrammetry where it was only dropping into the 40’s before. More to the point, the stuttering 25 fps seems to feel more like about 8 or 9 fps. This seems to be in line with other users experiences.

I thought it may just be the UK, but had the same issues around Sydney and Miami yesterday and even at a few rural and low density US airparks too. Running most settings on Ultra, but may have to drop some of them down until a fix is applied.

Can anyone confirm what the bugs ASOBO have found are related to? From what I can tell there seems to be a CPU usage issue and a problrm with RAM usage.

Not sure why but doing this everytime works

BUT this doesn’t solve the issue when flying over an area and my FPS drops to 20 or 30 fps; that’s something different again

That would point to a scenery loading issue at the server end then, perhaps Gruesome, which was my original observation.

Feels like that; watching my download meter I can see it’s not downloading anything so that would mean the server isn’t sending the data do the game is waiting for it!

I think that’s it!

I just tried going offline in a guaranteed stutter fest area (FACE) and it didn’t make any difference here. Same stutters even in offline mode, and after reconnecting.

Bugga as it worked the 3 times i had the issue tonight!

Do you use rolling cache? Try removing that if you do and see what it does

No, I don’t use rolling cache. 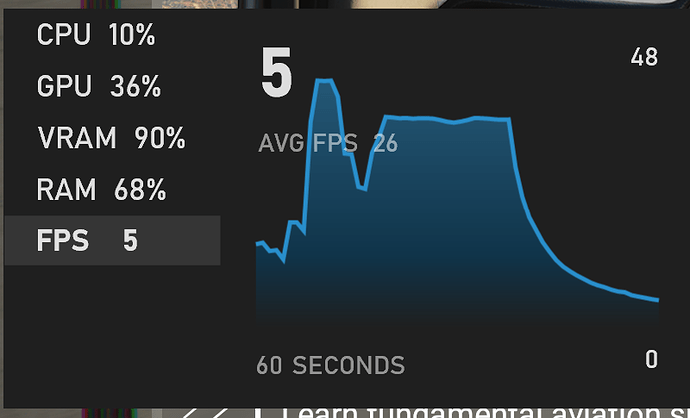 There’s only a few things I can think of:

I’ve identified the issue (at least for me): 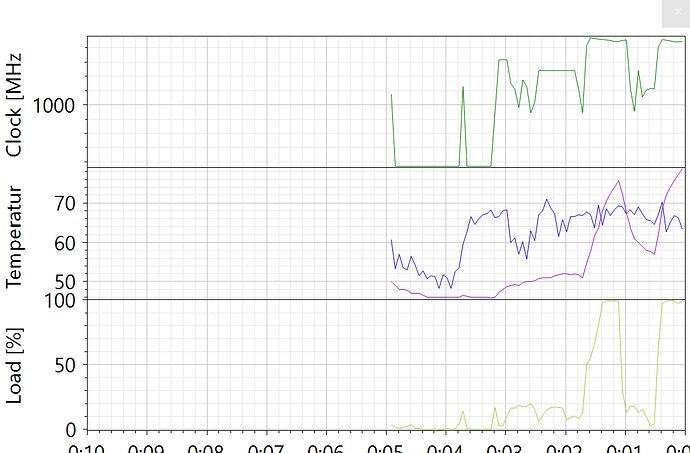 The GPU clock frequency drops to half. What’s interesting, is that by simply alt-tabbing out of the game for a few minutes and then going back, the frequency jumps back up to what is required for the game to be smooth.

Are you one of the “beta testers”?