Stuttering after the Hotfix version 1.15.8.0

If you are experiencing slide show like stutters every 1-2 seconds after the most recent update. I have found the multiplayer to be at fault. If you go into settings and turn off “multiplayer” (Don’t turn off the “online functionality” just “Multiplayer”

All stuttering goes away. Yeah it sucks I can’t fly with friends and others… but as soon as ASOBO can actually make something that doesn’t break another thing. It will have to do…

Microsoft confirmed the performance issue with the latest windows update and has issued a server side emergency update. Unfortunately you can’t check whether the fix has been applied to your machine, so the best you can do is reboot your machine a few times over the weekend and see if performance improves.

Great intel for many in this forum!

I confirmed that I have the hotfix using the regedit method listed in that article, but I still have intermittent stalls sadly. So back to the drawing board. For anyone interested the profiler I used was called “Superluminal”

I just sucks at the moment. After WU3 and the performance update i had no troubles and smooth flights. But now it is just barely playable. A lot of flights start smooth, but during the flight it becomes a complete stuttermess

For those effected with stutters and FPS lost when using multiplayer, please use this topic instead so contributions and votes do not split:

This topic has been pushed to the developers. Thank you!

For those experiencing stutters and FPS drops while using multiplayer and/or custom liveries, please use this topic:

This topic has been pushed up the developers. Thank you. 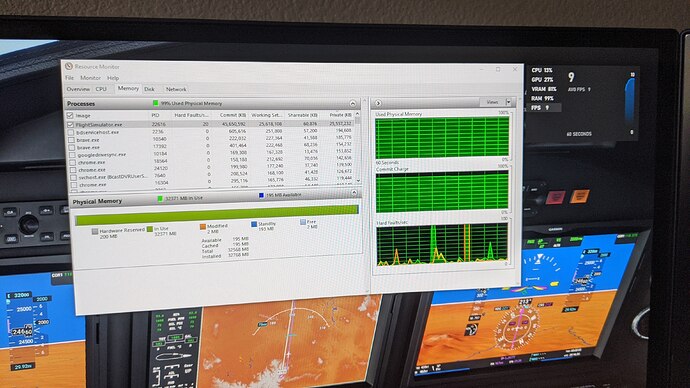 I am thinking Memory Leak.

RAM usage varies between 19G and 24G depending on location. But it recovers nicely.

I am leaning to blame one of those mods causing this problem. I will add one at a time to see if which affects RAM and/or performance.

I still have the same problem as I originally posted even after 1.15.10.0 and after the installation of the Microsoft patch issued to fix the problems caused by KB5001330.

And yes I have submitted a zen desk report.

Hello everyone.
I didn’t played the game since 7-8 month because of work…
I was hoping to see greater performance increase when I logged in not long ago.
Played( or at least I tried) lot of times since the last two weeks and I am very dissapointed about the performance. I don’t know why and how can a trully beautiful game so beutiful and broken at the same time…
I have hard issues with stuttering. Sometimes the sim is only works with 1-2 fps…I don’t know what’s causing the issue but if I remember well, I played this wonderful game last year november and it was quiet fine…

My system is a Ryzen 1700, Aorus GTX1080 32GB Ripjaws 3200mhz ram and a WD HDD (I know I still don’t have a SSD but I think this is not the problem… I watched the performance with the task manager and I saw my pc doesn’t even working so hard… only my ram almost 30gb from the 32 what’s causing this? Everything is on ultra, on some areas it’s very great and smoth. But in other areas (and not always in big cities it’s literraly unplayable…).
I tried different resolutions and reduce the settings but the stuttering is the same.
Anyone have a solution or something?

Or we need to wait always for a new patch “because it will better”???..
I bought the deluxe version, and the aircrafts are still bugged after 8 months…for example the Longitude…which is my favourite. And also the airports, Chicago is completley bugged…there is a fracture or something like that on the 27L and if you are not careful your aircraft will do a loop on the ground…and you crashed…this was the same in Las Vegas airport last year when I played… Really? So ■■■■…

Sorry for the grammar mistakes I am not a native speaker… I don’t know that this is a good topic for my complain or not. Please relocate if not.
I just very sad because of this.

Sorry you have been having problems, I can guarantee this latest update will give you massive improvements in performance and reductions in stuttering.

Unless it doesn’t. A number of people are still getting stuttering. Couple threads on it.

I started to experience stutters aswell after the hotfix update.

I think everyone is getting this issue inside the cockpit. Pleas upvote this!

I am going to close this thread as it is referring to a build that is well out of date.

There are other threads, e.g.

Do you have any add-ons in your Community folder? If yes, please remove and retest before posting. No, all have been removed. Are you using Developer Mode or made changes in it? No. Only to provide diagnostic overlay in the provided video (link below) Brief description of the issue: When using TrackIR, mouse, joystick hats, panning or tilting of the camera results in significant framerate drops and stutter in SU5, including audio stutter. The impact of the problem appears dependent on the s…

for the current build.

It is probably best that relevant comments don’t get buried in old threads.
Feel free to post and participate in one of the more relevant up to date threads.