Just wondering if it’s normal for it to be this hard to take off with these types of wind? It refused to stay straight with all the rudder. Using live weather 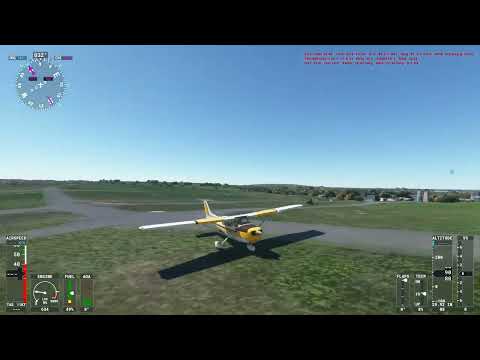 @airmanparker I use the below settings, dialed them in using a custom weather profile to give a steady 15kt crosswind. With these it should be controllable, but you’re definitely going to have to work for it. ground_crosswind_effect_max_speed = 0 ground_crosswind_effect_zero_speed = 0 ground_high_speed_steeringwheel_static_friction_scalar = 2.0 ground_high_speed_otherwheel_static_friction_scalar = 2.0

What’s the actual wind speed and direction relative to the runway? Because it’s looking like you’re trying to take off in a strong crosswind that’s out of spec for that plane. If it were real life you’d likely die trying to take off in conditions like that. If it’s over 10 kts, you’re past the safe takeoff rating for a 172.

Yes, you have up to 20 kts crosswinds. What did you expect? You will need also ailerons corrections not only full rudder to have some minimal control. But you will be still over the airplane max specs for takeoff… It´s too much wind for that aircraft.

If the windspeed is 60kts head on, you dont even need to move the aircraft, it will just take off and fly, since there is already enough airflow over the wing to make the plane fly,so 40 kt headwind means you only have to go 20kts on ground to “fly” giving you and indicated airpseed of 60kts while only moving 20kts over the ground…Plenty of videos of planes taking off and flying by themselves from strong winds on yt. all planes have a max wind capability that they can fly in

Sea planes, when getting delivered, take off from sitting on the back of a trailer being towed behind a car down the runway

That would do it. As I said earlier, the max safe crosswind takeoff speed for a 172 is 10kts. Anything higher than that and you’re basically taking your life into your hands.

You may want a much bigger plane in that case. And I mean MUCH bigger. lol

has anyone experienced thunderstorms and lightning? It’s better than SU9, but still no storm clouds …: /

Crosswind was never simulated correctly. This is why I turn down the winds to almost zero.

Out of curiosity I just tried that landing in NYC. Crosswind behavior is still ridicolous. At and near the ground ony gusts are there. Proper correction via the aileron is not appreciated by the sim. Only the rudder keeps the aircraft aligned. Only once up in the air the non gusting portion of the wind is recognizable. This is far away from beeing properly done.

For now I can only advise to stay away from practising crosswind landings with MSFS or you will incorporate bad habbits for real life.

Moved topic to #self-service:weather for community assistance, although it looks like the question was answered.

The new gusts can be a real chellange especially for GA aircraft, but thats not necessarily a bad thing:

Thanks Asobo, this turbulence is absolutely spot on! General Discussion

Until now there hasn’t been any realistic feeling turbulence in any flight simulator (that is probably why people are complaining because people are not used to it). But in real life in turbulent conditions you constantly have to use the aileron to compensate, it’s actually really hard to control a plane in these conditions. What we have now is really wonderful and finally we can practice some challenging approaches instead of the plane being on rails all the time.

I’m curious about the aileron thing as I was advised to do that by people on here as well, as I too am having ridiculous take offs with the 172 too, sometimes failing to even make it to the runway, as the plane is being blown to the left even with me stationary and the throttle almost on idle.

I flew from Wick airport in Scotland with live weather yesterday. There is no ATIS there so I couldn’t see what the windspeed was but asking Alexa the windspeed in Wick Scotland, she said 14 mph. That doesn’t sound very high to me but maybe it is, I’m not an IRL pilot so don’t know.

Anyway, back on topic, when I tried turning the yoke to manage the ailerons, it didnt do a thing, whether I turned left or right.

My feeling is that, much like carb heat in the 152, its a level you can pull that does absolutely nothing, its actually operable and I don’t believe aileron steer on the runway is being calculated at all so it’s real world advice with no practical use in the sim. Is that correct?