I agree with @nenenui that it occurs mostly at larger airports. In my case, always at KLAX in varying amounts and most of the time at KSFO and KOAK. I often see off the western end of KLAX texture tile shaped islands complete with trees. I’ve been pondering on what I’m seeing and I suggest the tile position in 3d space is slightly incorrect hence being shown in the wrong layer. I’m no programmer but wonder if part of the optimising done for SU5 introduced rounding off errors in the calculation of texture tile positions resulting in incorrect display. I have no idea on why it’s only evident on the AMD Vega series. I note that @jimmyD5 has the issue on the RX 6800. It may well be that many more people have the problem but never see it due to not using large airports.

I have the same problem on a NVIDIA card see the link Redirecting...

Interesting … that somehow raises the question if the problem really is inside the AMD driver.

If Nvidia cards are also affected then it pushes the responsibility somewhat upward in the stack … e.g. DirectX or even the game engine itself.

This is how it looks for me: https://youtu.be/P4wvL5AvAgY

… perfect documentation … but that is a different bug.

What you are seeing is one aspect of this topic/bug …

EDIT 2021-09-10: I changed the title, because the LOD specific inconsistencies are not limited to textures, but they include 3D features, elevation data etc. While studying the … “lack of trees in Germany” problem … I did notice a different “bug” … which perhaps is related (due to lack of synchronized server data?) As I fly across the scenery the ground textures show a very extreme change in color as the LOD changes. It feels like the far-away LOD is showing autumn colors (brown soil of emp…

In a sense that is “good” … as this bug here remains a AMD bug … so it still could be a driver issue after all.

I have a ■■■■ ton of money and so I buy various fancy hardware like crazy. I have multiple machines for all kinds of testing I can’t do on VMs - one that I use for MSFS testing specifically runs Vega 56 - had the messed up Honolulu since the beginning of MSFS time.

Exactly the same as on the screenshots you folks shared here.

All drivers updated on a regular basis, so I can say it’s been the same on pretty much every AMD Adrenaline driver iteration since the August of 2020.
Machine next to it runs nVidia’s Ampere based 3080TI - no apparent issues, although [Honolulu] mesh or ground textures or I’m not sure what…still somehow act and seem a little bit weird and off.

Driver AMD 21.10.1 bug still here… And may be worse it seems…
I’ll try to install an old one, just to see what happens.

I can confirm that “downgrading” to that older driver appears to have fixed the problem for me as well! Thanks to @PopeyedSatyr154.

Proximity to airports seems to play a role. At least to me there seems to be some pattern of causal relationship.

After a screenshot (via AMD tool) sometime “blueish” textures pop up. That has a very low frequency … but there is some relationship.

Who knows … maybe this does not get fixed because DirectX12 does not have this issue. So I am hoping for Nov. 18th.

Unfortunately you’re right! The new AMD driver 21.10.2 … still shows this bug in MSFS.
I hope the new upgrade 6 can fix it… But no.
A question : what are they doing in the AMD research center ? Are they blind or what ?
THE SQUARES ARE STILL HERE !!! WAKE UP PLEASE!!!

I still have the problem with a Vega 56. I’ve installed both the new drivers and SU6, NO CHANGE.

There has been nothing improved since SU5 broke the sim for me. I have created scenery for BGBW which I’ve uploaded on flightsim.to and I can’t update it… and I haven’t been able to since SU5 broke scenery for me. If you think the squares and garbled scenery is bad in outside or spot view, try using the SDK and scenery developer mode… you can’t understand or do anything at all with flashing squares and random textures all over the screen. All development I’ve made has come to a stop since SU5. If the sim doesn’t work, I can’t make addons for it! All this is extremely disappointing.

Vega64, confirming that going back to 21.04.1 driver fixes the issue of broken textures when using developer camera. Also no blue tiles so far.

I’ve submitted a bug report through AMD bug reporting tool, describing that the issue is common on Vega56/64 cards and that downgrading driver fixes it. 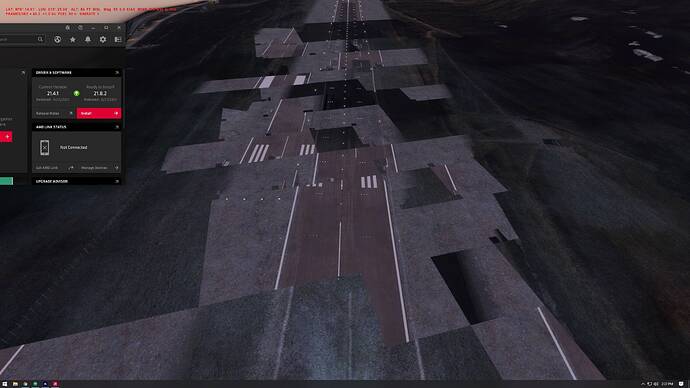 the problem still exists for me after downgrading to 21.04.1

The easiest way for me to reproduce the problem consistently is to go to ENSB (make sure scandinavia is installed), throw on the drone camera, up the drone speed to more than 4%, increase altitude and it results in immediate corruption for me.

I’m a scenery creator, the problem started for me the day SU5 installed and didn’t change with SU6. The first thing I do after any update is go to recompile my scenery with the new SDK, with this corruption all scenery development has stopped completely.

(if I could unlike the post above I would, it does not solve the problem here)

Interesting … so it does not seem to be just the AMD driver version. Somehow we are “back to square one”.

I can see how this bug makes scenery development almost impossible.

I do use multiple screens and have an AMD CPU. Any Intel CPU and single screen people affected?

I can see how this bug makes scenery development almost impossible.

That is an understatement, it is 100% impossible for me to update the BGBW I have on flightsim.to along with a few other sceneries I curate. Perhaps when BGBW was added to the sim (it was originally not in the stock simulator), they didn’t want competition with my scenery and took me out!

I am relying on other people to let me know it functions properly in SU5+ as it, along with most other scenery, is corrupted and flashing textures like a discotheque.