EDIT 2021-09-10: I changed the title, because the LOD specific inconsistencies are not limited to textures, but they include 3D features, elevation data etc.

While studying the … “lack of trees in Germany” problem …

As there seem to be so many “issues” around WU6 I can not say if this has been reported before, but … Flying from EDDF to EDDK along the river Rhein I noticed that at some point the trees were gone. Very sporadic “bushes” do exist … but other than that the forrests are just plain sat images. Other 3D features are there … houses, power line poles, etc. … but not trees. Setup: PC, 4K Ultra, 200 MBit uplink,

I did notice a different “bug” … which perhaps is related (due to lack of synchronized server data?)

As I fly across the scenery the ground textures show a very extreme change in color as the LOD changes. It feels like the far-away LOD is showing autumn colors (brown soil of empty fields) but when they get closer they switch dramatically in their color schema (just as if they now would be in greenish summer mode).

Here is an example near Würzburg, Kitzingen (Germany) when flying towards Nürnberg (EDDN) 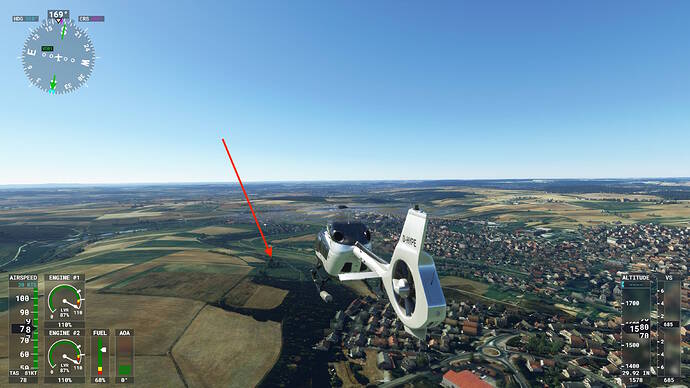 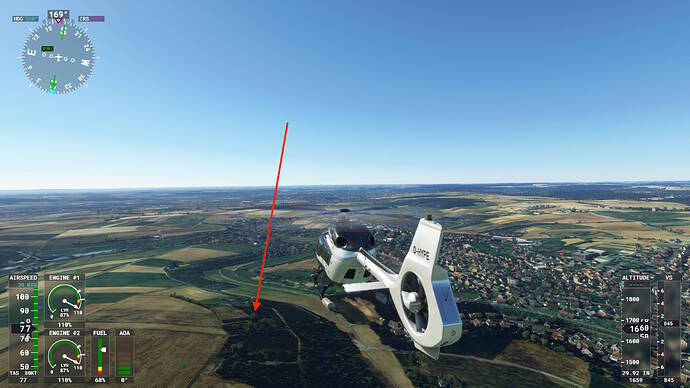 I did mark a group of trees … and as they get closer to my location the texture around them changes. It is possible to identifies to regions where the LOD change occurs in each picture.

When flying this (slight) change in texture (brownish to greenish) is very “in the face” … as they do come with that rapid “pop in” effect. In the still images it is a little bit more subtil.

Unclear … is that (also) due to servers still providing outdated scenery data?

PS: I have noticed the same behavior on the German island of Borkum (EDWR) … and it most likely shows up in many other regions too.

PPS: … and others noticed the same problem in many other regions of Germany (see below)

While flying from Stuttgart (EDDS) to Basel (LFSB) near in the mountains south of Schönau (you can see Basel from up there) I did run into two different “bugs” which caused me to edit the threads title.

It seems like there are general LOD inconsistencies in the “raw data” on the servers. I placed some markers into the images: 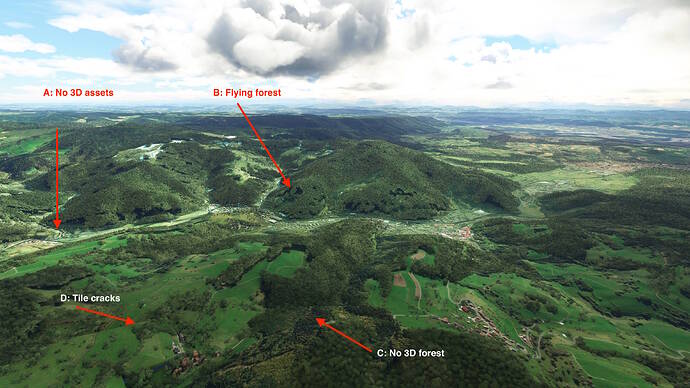 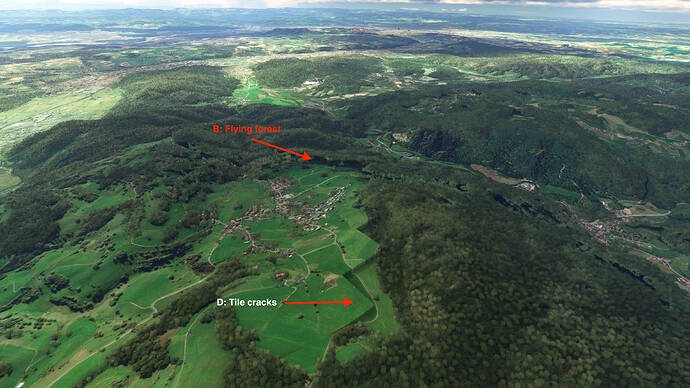 I take such images with the drone cam, which allows me to move back and forth. When doing that it becomes clear that those changes (scenery bugs) are LOD specific inconsistencies. The “bugs” appear and disappear based on the distance from the camera.

A: Some areas lose all 3D assets … they reappear when further away (normal LOD would be the other way around)

B: The black shadows under the forests are the result of the trees floating 10 to 20 meters above the ground (and this is not because we are in the “Black Forest” = Schwarzwald) … so they are not aligned with the elevation data for that tile.

C: Is like (A) but here limited to the forest (tree) assets … at further distance I had trees … but when getting close they vanished.

D: Tile cracks … most likely due to dramatic differences in elevation data between the different LOD data sets.

It is possible that the underlying causes differ.

There also seem to be a links to some other recent topics:

As there seem to be so many “issues” around WU6 I can not say if this has been reported before, but … Flying from EDDF to EDDK along the river Rhein I noticed that at some point the trees were gone. Very sporadic “bushes” do exist … but other than that the forrests are just plain sat images. Other 3D features are there … houses, power line poles, etc. … but not trees. Setup: PC, 4K Ultra, 200 MBit uplink,

Persistent cracks in ground tiles (not water) … since SU5 Airports

It seems like something fundamental has been changed in the SU5 rendering engine. Prior to that ground cracks could only be observed in: A) water … (most likely due to the problem of trying to flatten it) B) photogrammetry regions … (most likely due to the progressive tile based nature of those regions) Both of those had the feature that they did morph as the camera moved and the scenary was refined … which often resulted in some kind of “healing” or random variations … all in all those types…

This set of bugs is different then …

… because the morphing comes from having either too little or the wrong “triangles” to approximate a 3D shape. But here we have issues where different LODs basically show a different world … so we have LOD inconsistencies.

Is this with or without the World Update installed? (As in: Did you go to the in-game marketplace and installed the world update 6 for Germany/Switzerland and Austria?)

This is with WU6 installed.

This probably is due to the fact that the last BING data update seem to concern specific lods.

Oddly enough, the ground LOD seems not to have been affected by those BING data update.

As an example, above a specific altitude, let say you are at LOD1, then when you go down this altitude, the tile switch to LOD0.
It seems to me that, until LOD1, BING data are up to date, but in LOD0, this is not the case.

So, if a BING texture displays a field at summer with the new update, the LOD0 one still displays the old texture (which can be a spring texture). So that’s why the colors are heterogeneous.

In Luxembourg, this is more noticable near the new Luxembourg stadium, as you can see the stadium footprint with the new BING data, but this footprint disappears near the ground, as it displays the old BING texture.

This is due to the fact that the last BING data update seem to concern specific lods.

Frist … I am “glad” that this also affects other countries, because then it is not specific to the WU6 countries … and it might be a general issue.

Second … I do not think it is a Bing issue. If I understood it correctly then Asobo is taking Bing data as the basis … they apply some color adjustment and whatever … and then Asobo uses the Azure system to serve their own variant of the Bing textures. At least this is how I understood the process Asobo described about a year ago.

It would be strange if Asobo would not derive the low-res LOD textures from one primary high-res LOD world texture.

So I still think this is more of either

However, I find it strange that such changes would be made in the “life” data set … because that produces the inconsistencies which we seem to be experiencing.

Maybe there is an intermediate process in Asobo’s side, but this problem appeared as soon as i updated the Word update for benelux countries. And this update was Bing data update. So i think it is related to Bing (but it does not necessarly imply that this is a Bing data issue).

Now that is interesting … are you saying that the issue is still around in the Benelux WU5 region? Even today? That would not be a good sign for the DE-AT-CH regions.

I did not fly in those countries yet … but perhaps that is a reason to visit those regions.

I only saw it here (at Luxembourg city) for the moment. But as for me, it can happen in other parts of the map where Bing data have been updated. It would be interesting to check for such heterogeneities and see if a Bing data update has been done recently for those areas.

Also, if the intermediate process consisted in a color adjusment, the new Luxembourg stadium should not disappear near the ground, which is actually the case (it should be recolored instead).

I am not at home for the moment, but if someone can take a screenshot of the new Luxembourg stadium footprint at different altitudes, this could illustrate clearly the issue.

Well, i have an extreme example here, it’s not specific to the world updates. It’s all still based on bing maps. Which, also the WU’s are. They will not be walking every satalite image tile and pick their paintbrush. It will take a bit longer to align that way.

Giving up on simming after update V? General Discussion

Sure, that was my second point actually. Satalite imagery is different on different “zoom” levels. With zoom in respect to the sim, how close you are on the ground. Satalites take images from earth with different zoom levels so to speak (I try to simplify it, otherwise look at the end of this post with a link to bing maps tile system which also has other interesting menu links). Example when i was flying over the saltiplano salt planes in bolivia. This is at image coordinates -20,138332, -67…

The problem is not exactly the same here: if you take a look at the bing map here:
49,577023, 6,114032
, you can see that the stadium still appears at every altitude. It was not the case in the sim when i checked it (near the ground, the stadium disappeared).

The same kind of pop in ground textures appeared around Kastrup airport at Copenhagen after the Nordic update but now after WU6 the difference between the textures popping in are much greater.

Sorta like the difference between Summer and Autumn colour wise.

After the Nordic update I tried clearing the rolling cache but it didnt change anything.

With WU6 not fixing the general object pop in and terrain morphing issues and now with the even worse ground textures pop in I start to wonder if those things ever will get fixed at all.

Not able to properly check now, will take a look later, interesting though.

When starting there, it is as if with higher altitudes (just like 500 feet or so above ground) the game wants to display a different type of texture. These are clearly still photo textures streamed from the Internet, but unfortunately in a completely different color (probably taken in a different time of year). The result is extremly annoying.

I have already deleted the manual cache and the rolling cache, so this is not the issue.

To reproduce, just take off at runway 27 with a slow plane like the CT and fly a traffic pattern (south, left hand) and watch the ground textures.

I experience the same issue on xbox SX. After the last update the graphic become terrible. A downgrade happened. Also MS deactivate flight condtion button. You are no longer can edit setting of live weather and multiplayer, etc… what is happening?

same issue with sx after wu6 the sim is downgraded

There is no downgrade with this World Update. Please share screenshots of what you consider as a downgrade. Don’t share impressions, please. Just concrete facts. It will be more helpful for devs.

So here are screenshots of the bug (look at the stadium footprint): 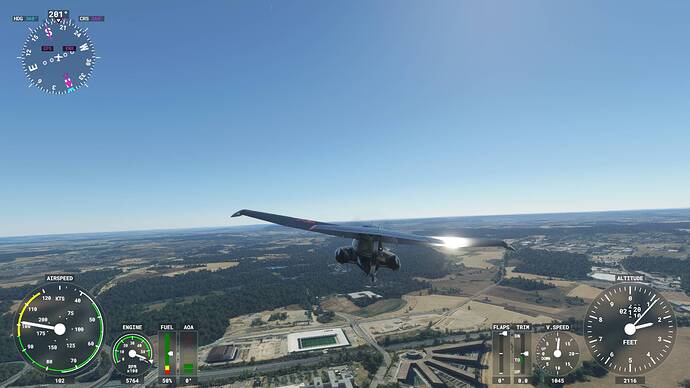 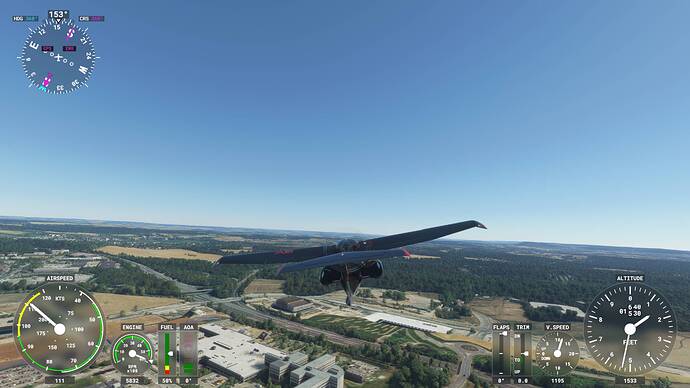 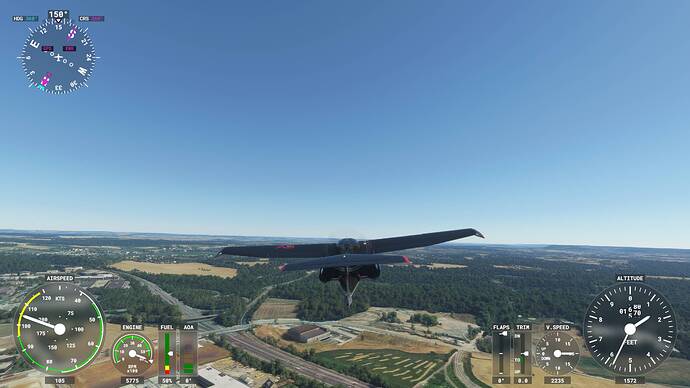 Other illustrations of the bug: 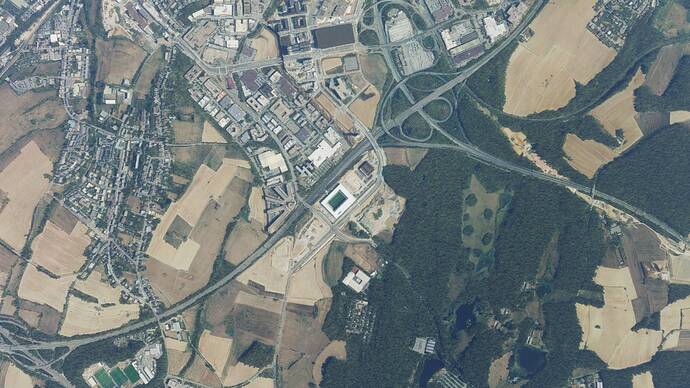 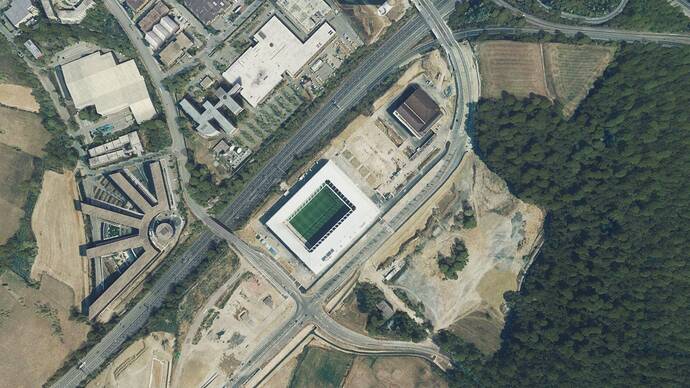