As there seem to be so many “issues” around WU6 I can not say if this has been reported before, but …

Flying from EDDF to EDDK along the river Rhein I noticed that at some point the trees were gone.
Very sporadic “bushes” do exist … but other than that the forrests are just plain sat images.

Other 3D features are there … houses, power line poles, etc. … but not trees.

Can you be more specific by either giving coordinates one can punch into the map or by naming town names near the phenomenon?
I just flew from Bonn to Mainz and didn’t notice any major patches with missing trees.
Rather the opposite, I had some on approaches that shouldn’t be there.

The “tree less” landscape for me started prior to Bingen … and lasted to Bonn.
Here is a picture from a mountain north of Koblenz looking south towards Koblenz: 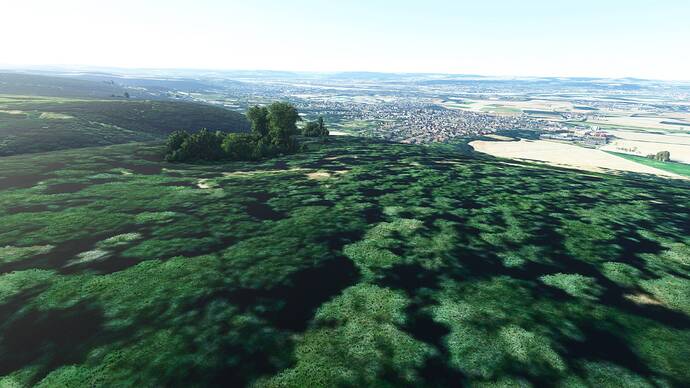 I have nice trees in Frankfurt EDDF … and lots of tree around Cologne EDDK. Here “tree-less” seems to end (I can see EDDK from north-east of me) 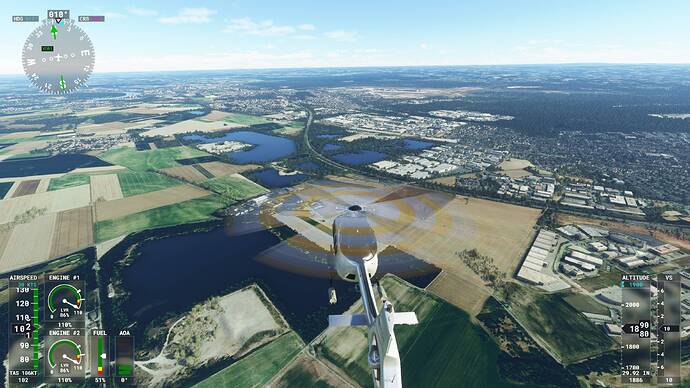 It would be interesting to know if this is in the dataset … so if other people get the same result.

Yes, as you say trees are sparse from north Koblenz down the Rhine to at least Wiesbaden. But buildings and other added assets also look to be simimarly sparse.

I think the problem is more that the Bing maps used are so poor in quality that MSFS just can’t interpret and add what’s required where.

I’m definately not seeing what you are seeing.
Are you using the rolling cache and did you delete it after installing the Germany update?

Interesting … so I will investigate further.

Yes, (as always) I did clear and rebuild the cache … but I will retry at a different time. Perhaps some of the Bing server are overloaded these days … and that causes high latency … which cause request termination.

But that explanation somehow would not explain the houses and bushes which I do see. IMHO they indicate that I did receive “3D asset info” for those tiles.

Maybe the data replication between the servers has not been fully complete … and so no everybody gets the same data.

Who knows what is going on?
I have noticed with the new 3D asset info that I get way more trees than there should be there.
I see them in the midst of agricultural fields, I see them on airport grounds where they shouldn’t be.

No trees in that area (Mosel included) for me either. And yes, | updated with empty community file.

The problem with the missing trees exists in large parts of Germany where there are new Bing aerial images with pale colors or relatively little contrast.

It can be seen quite extremely, for example, in the large forest area directly north of Würzburg (Bavaria), where there are high-contrast aerial images in the west and low-contrast ones in the east. The western forest area looks normal with dense trees. Exactly at the border of the low contrast aerial images, the trees are missing by more than 90%.

It looks terrible and stretches over huge areas.
The immersion is completely gone.

I don’t think the problem can be fixed easily and it has nothing to do with server overload.

So I took another trip … this time from EDDK (Köln) down south along the river Rhein … very few trees in the Bonn area: 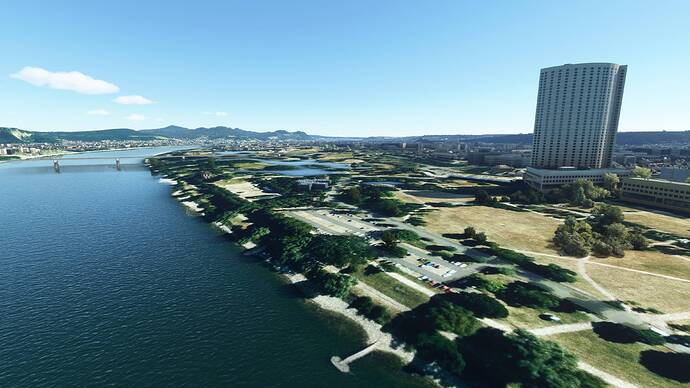 … and so near Königswinter I get this: 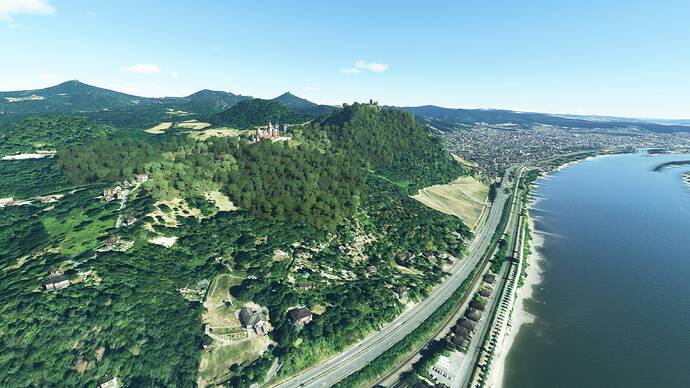 Clearly … the new hand made (castle) assets have trees … but the auto generated landscape does not.
So I totally disable the Rolling Cache and retried 20 min. later … 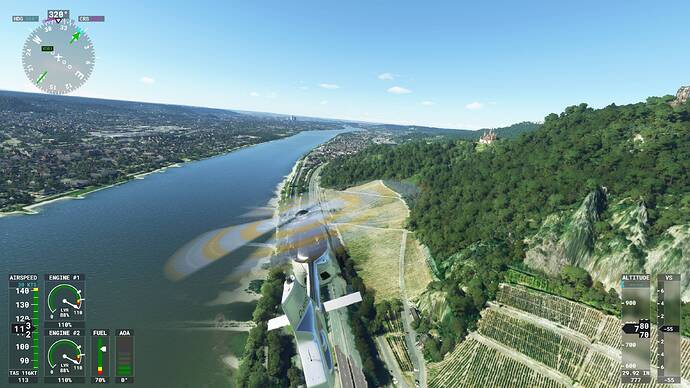 And now I get trees.

But as I already wrote … I did delete the cache prior to my first WU6 flights. So to me it seems like the replication of the multi-Petabyte Azure backend world data was (is?) not fully rolled out to all servers in the same level.

Seems like this time my server had the data. So this “bug” in this area seems resolved (at least for me)

It can be seen quite extremely, for example, in the large forest area directly north of Würzburg (Bavaria),

Sounds like an interesting location … so I will take a tour there to see if that can be reproduced “on my end” … or if that is also fix by now.

Noticed a tree issue everywhere in Germany.
When it switches to the highest level of ground texture then suddenly trees disappear.
Saw it north of Frankfurt, north of Stuttgart…
Trees come back when texture switches back.

Try to change graphic settings with NO positive Results…

Not really … besides wait for Asobo (or Azure?)

The issue near Koblenz is gone now (at least for the server that I was last connected to).

Think could be a server problem. Waiting till tomorrow and try again

in the large forest area directly north of Würzburg (Bavaria)

So I took a trip there … and I have the same “lack of” landscape.

Just on the hills right north of Würzburg … and towards the village “Rimpar” I have this “none-forest”: 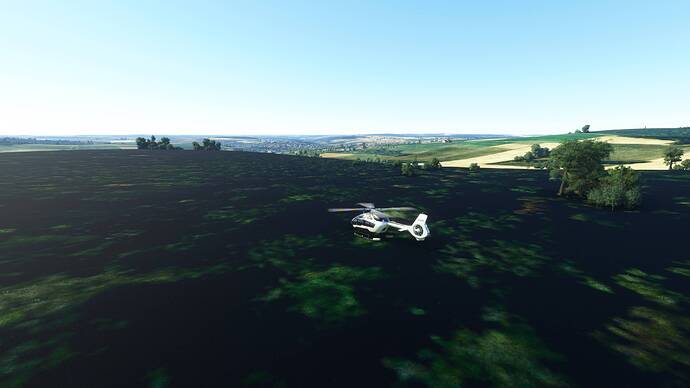 I then continued towards Nürnberg … and the “deforestation” is basically everywhere.

So I guess we have to wait a little for “nature” to catch up with the WU6 rollout.

On the Rimpar site I also saw something that we have been discussing here:

Persistent cracks in ground tiles (not water) … since SU5 Scenery

Loaded up the sim following the WU6 update and the tile cracks at EIAB remain. Hopefully Asobo will rectify this issue soon. 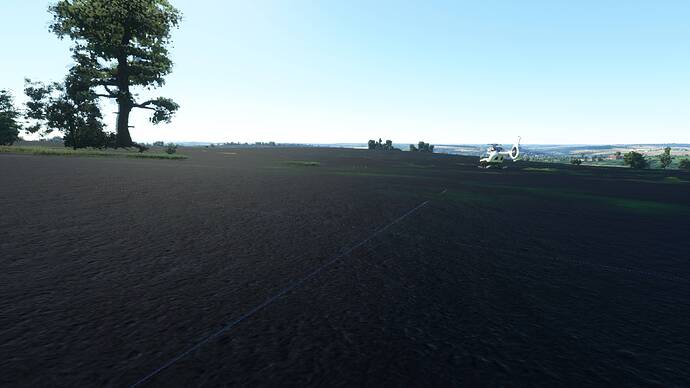 What actually is interesting here is IMHO … Germany typically has very detailed OpenStreetMap data with very good land use tagging. So “detecting” a forest is not that hard in most cases (= does not require an AI checking the sat image).

The same goes for agriculture land use … OSM is a pretty good source. Yet I do see lots of trees growing in the middle of a corn field … and the forest to the right and behind is more or less empty. 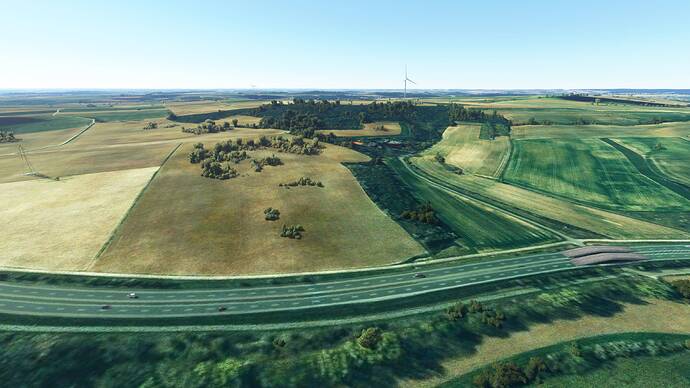 Before update 6 everything was good. Asobo asobo…

Just conducted test no. 3, and it’s back to usual for me now. All very strange.

I did a flight from EDVK to ETHF today and didn’t see a single tree in areas with forests. They were definitely there before.
Let’s hope it’s just a server problem. I’ll try again tomorrow.