Please tag your post with #pc and/or #xbox.
#pc
Are you on Xbox, Steam or Microsoft Store version?
Microsoft Store
Are you using Developer Mode or made changes in it?
No
Brief description of the issue:
SU8 introduced a regression where pressing the middle mouse button to toggle virtual cockpit free look no longer works. Pressing once will get you into free look, but subsequent presses will not result in exiting free look. This regression was discovered in beta, but it was not fixed. According to that report, right mouse-clicking will get you out of vc freelook, but that workaround no longer works in the shipping bits. Unless there is a workaround, this is a huge issue because it effectively renders the virtual cockpit useless. Even if one were willing to stay in virtual cockpit freelook mode for the duration of the flight, it is not possible to interact with any controls while in this mode. If anybody has a reasonable workaround, please post as right now this is blocking me from flying as I can’t access necessary controls.

Expected: exit VC mode in current view, mouse cursor should appear, and it should be possible to interact with controls.

Actual: user remains trapped in VC mode with no way to exit. AFIK, there is currently no way to exit VC Freelook while still preserving the view.

Build Version # when you first started experiencing this issue:
123.12.0

I agree and I upvoted this, but I am still unclear on whether these bug reports filed on the forum do any good.

Yeah, I filed with Zendesk too, but unclear whether those do any good either :).

Yeah I was just going to edit my post to say that. Thanks for filing it on Zendesk too though.

Are you on Xbox, Steam or Microsoft Store version?
MS Store

Brief description of the issue:
Normally pressing (or holding until you release) middle mouse in the cockpit will get you in and out of freelook mode. In this beta you can get in freelook but then middle mouse doesn’t register when you want to get out.

Same for me, MS store version too with no mod.

Try pressing the right mouse button. I think this worked for me.

Have they also fixed the issue whereby pressing middle mouse for freelook also resets camera zoom? its so annoying.

I can confirm this.

No, because pressing middle mouse in freelook does nothing at all currently

Middle click toggles you into freelook but clicking it again does not toggle you out (worked in SU7). I’ve found clicking the right mouse button will get you out of freelook as a work around. 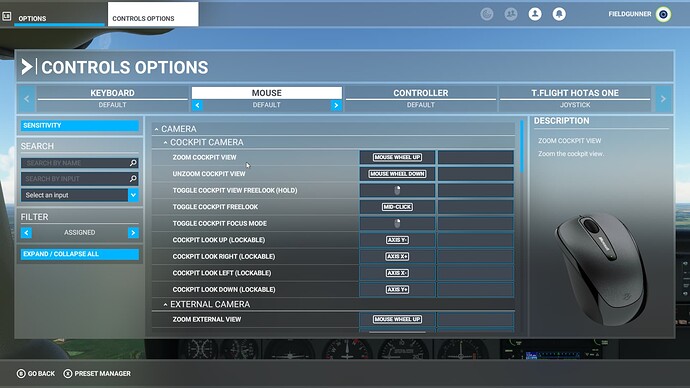 With so few votes, what are people using now to look around while controlling the plane? Using hold for freelook locks the controls, while toggle can’t be exited. Is there a workaround? I thought I’d give the sim another chance while trying to ignore the live weather issues but this is keeping me grounded too.

With right mouse button you get out of it.
Still annoying though.

With so few votes, what are people using now to look around while controlling the plane?

trackIR/VR headset/pov hat… there are several other options! I voted though, because I know it’s an important feature for many people and it should be fixed asap…

With so few votes, what are people using now to look around while controlling the plane?

I fly with a PlayStation controller emulated as a Xbox controller. I’m essentially always in free look mode, with the right analog stick controlling the camera. However I do still use the mouse to operate some of the controls in the cockpit.

It’s not fixed in the new update as well as the “flight controls locked while panning” bug.
There are too many small bugs, hopefully they will tidy things up soon.
The drone cameras roll bug is another example.

Thanks @Jummivana for merging the topics. Now I see that this has been tagged as “bug-logged” which gives me some hope that it may be addressed.

Can you please post right mouse button is control mappings? For me clicking on RMB does nothing.

It seems to me that you are saying your issue is resolved by using a workaround. Workarounds are good but they aren’t always ideal.