Sun Visors - Why don't they work in default aircraft?

I’m flying the TBM Improvement mod now with movable sun visors. They are so amazing I can’t figure out why so many default airplanes have them included but inoperable? Like many things, it seems like they are just left unfinished.

The level of high contrast detail they reveal in the daytime is amazing. Clouds, water, other airplanes, ground objects, etc. just pop out from all the white washed out haze.

It might take using them in VR to get an appreciation for the impact they make.

The sim could also use simulated sunglasses. The OpenXR sunglasses work great but I don’t think they can re-render the full effect of what glasses would do.

I believe I know the answer to this One. !! Its actually documented in some of the JS code.

The Sun Visor code is there - but Commented out !!,
It seemed that during development, they had trouble getting it to work in some of the planes, so, there is this "Amusing " comment in the code, that they decided not to implement the Moving Visors in ANY of the planes ( to be consistent ?.) - that’s what the COMMENT says !!!

REALLY !! You could not make this stuff up - nobody would believe you .

Note: Other Developers have had no problem in Modeling Sun Visors.

I was puzzled by how nicely they actually work, yet are not used. Someone did some graphics programming on that for it to do what it does. The moon also looks great through it.

I’d guess they’ll get around to it at some point.

I suspect we would see much fewer complaints about daytime looking washed out if these worked or if there were aviator glasses in the sim.

I’d guess they’ll get around to it at some point.

Yes, sometime in the next 8 years – if we are lucky - or maybe not.
It’s already been two years, and no movement on the Visors
( see what I did there – {pun} )

Yes, sometime in the next 8 years – if we are lucky - or maybe not.
It’s already been two years, and no movement on the Visors
( see what I did there – {pun} )

LOL, yes. I hope we see some movement before then. Or we have an improvement project for all the defaults.

They really need to pay someone to add these minor features in the default aircraft. Maybe if we raise Holy Heck with upvotes they will.

Or we have an improvement project for all the defaults.

Or some Community Developer will bring out improvement MODS …

ie WB-SIM’s C712 Classic “Near Study Level” improvement Mod, that should releasing soon now. (ie around the time that SU10 is released, )

I think Just Flight also has some similar products for other Asobo Planes … also waiting for the right “MOD Licensing” time to be released. ?

They really need to pay someone to add these minor features in the default aircraft. Maybe if we raise Holy Heck with upvotes they will.

One problem is that further improvements to make the default Aircraft more “Realistic” and full features, requires an increasing amount of both technical Programming skills, as well as a deeper knowledge of the specific aircraft systems.

These are two joint skills that are not easy to find, and these will that skill set are in high demand outside of the Gaming Industry, where they typically will enjoy employment with greater compensation, and maybe more importantly, and better and higher career path,

Consider such a development engineer / manager at Lockheed, with a bight future in upper management, and a potential career leading to a prime position at Lockheed.

Are they going to give all that up, and move to France, to work for a Gaming Company, on a project with a limited lifetime ? Doubtful.

In any case, anyone moving to France for outside the EU is going to face major employment law issues, including the languages issues.

Plenty of Key Positions being advertised by Asobo, to come work on MSFS in France, and they do nit appear to being snapped up.

Its not ALL about MONEY – although today, most things are !!!

I meant they could outsource, Game companies do it all the when they fall behind on projects. They use an established developer to help out. Microsoft has the resources but they may have to shift priorities though. The major flight mechanics and complicated systems would be left for a more experienced team. They have already done this on one or two of the local legends. I think the Fokker received this treatment. Working sunshades, operational doors and storm windows shouldn’t be to hard,

“COULD” being the operative word.

What decisions MS make are far beyond my pay grade / Knowledge, and I expect no right to be privy to any of it.

Its THIER game, and they play THEIR game by THEIR Rules, and with THEIR reasons.

Once can just hope that “With great Power comes great responsibility”

I see MSFS as a Roller Coaster Ride. I am a passenger on the ride, and am there to enjoy the thrills of the Ups and Downs.
I am not the one, nor do I want to be, the ones, on the platform, helping those on and off the ride **, or the ones who design the ride, and have the associated responsibly and liability fro its working.

** That’s not to say I wont help anyone, but if I do, its my choice and their liability !!

Yep agreed. We will see. Msfs seems to be pretty successful hopefully MS will pour more money into its development .

If I could make what I do currently, I’d love to do some development work on this stuff.

The community improvement projects are nice, and with encryption being dropped SU10, it opens up some more possibilities. Dropping encryption is an interesting choice they made.

However, nearly every project of passion I’ve seen, since there has been consumer software, eventually burns out. The poor developers gets hounded and under appreciated for giving large chunks of their lives away.

In one of the projects I manage, I have a comment in one method that states, “this is where your bug is likely located”.

Ah enjoy the Fenix, and all your sorrows are gone

I think there is even an UV-A and UV-B coat layer to protect your face from sunburns, but I am not 100% sure about this. 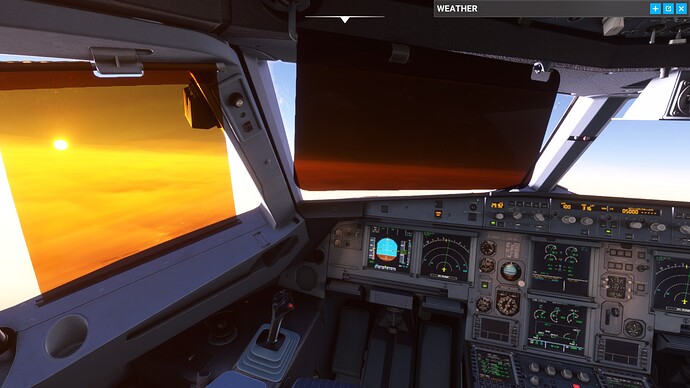 Believe me when you have the Flysimware Cessna 414 and the Fenix, you will not care anymore. About anything else that has virtual wings

There are a number of great things about the TBM Improvement Mod but that’s one of my favorites! I discovered early-on that I could also turn them to the side to block side glare. I’ve even grabbed the copilot’s visor to block glare from the other side of the aircraft.

I didn’t know that! That’s a nice discovery.

I once owned a car for two years before I realized it could do that. All cars have that now but I think some years back it wasn’t as common.

I just landed at San Francisco. There was so much haze there was a near white out.

I was using the sun visor in the TBM and it allowed me to see right trough all of it. It even saved me from a mountain.

I think, like doors, if they couldn’t easily make it work for all default aircraft, then it was removed for all aircraft.

Many models (one example is the DR400) have their doors animated on the external model, but not on their cockpit models.

I think, like doors, if they couldn’t easily make it work for all default aircraft, then it was removed for all aircraft.

I think, like doors, if they couldn’t easily make it work for all default aircraft, then it was COMMENTED OUT for all aircraft.

And since then, nobody has gone back in and figured out WHY it was not working, and fixed it … (or changed very much in any of the original Base or Premium.Deluxe planes).

Answer is very obvious, because they are default planes. You want to differentiate them on purpose from third-party payware planes. If the default planes would have all the bits and bobs they would take out a big chunk of the market and kill third-party developers.

I really think it’s a fair assessment to make and it makes sense, they have to draw the line somewhere