Has anyone found a fix for the rudder twitch in the Thrustmaster TCA Airbus Sidesticks?

Has this hardware issue been fixed in newer models, or is everyone’s joystick still causing a twitchy rudder?

I bought mine shortly after 2020 sim launch and it’s been like that since Day 1. I broke down after the fourth time I disassembled the stick to clear the jam with the wiring bundle and got a VKB - quality stick and you’ll appreciate the expansion capability with their throttles and switch boxes. Hall Effect sensors in all axes - you will never have this problem with them.

It sems like a common problem, check out this post. Might want to go through the whole thread if you need it. This totally fixed my problem.

So the TCA Sidestick yaw/rudder twitch finally got bad enough that I went ahead and followed your process. After disassembly, I found the wires separated well enough but found one of the wires pretty badly pinched. See photo below. I simply routed them away from the plastic post behind them which I think was binding them up. They really could have done a better job. I guess those with this problem had our units built by someone late in the day on a Friday!

Edit - add this too: YSK: The TCA Airbus Sidestick Still Has the Yaw Flaw. Here’s How to Prevent It from Failing. : flightsim (reddit.com)

Have to do this yet again on the replacement stick that Thrustmaster sent to me under warranty. Time between units? Less than 1 year. I love the stick but will not buy another.

Wow, that’s sad. You would think after all these years it would be fixed. What do you plan to buy next?

Unfortunately, it’s just going to keep happening on that stick. Poor design with the bundle and the potentiometer itself. Even if the bundle stays still (which it will not), the pot will eventually wear long before the Hall Sensors or anything else mechanically gives on the controller.

I know. Hate it as it’s got great feel for the Airbuses. Someone recommended another modular brand but I can’t recall what it was LOL! Will check out the one you listed.

You can’t go wrong with this brand. Amazing stuff, and if you’ve never had hardware buttons in enough numbers, you will wonder how you managed to sim without their General Aviation switch box.

Yes! This is the one! Really like the build quality.

It’s a joke that Thrustmaster haven’t rectified this issue, I mean it would be such an easy fix! I just don’t get how no one picks this up on YouTube reviews, like A320simpilot… makes me wonder if mine is a particularly bad one.

I find it’s even worse when flying the new Concorde, probably as the take-off / landing speeds are faster.

This also fixed my problem after disassembling it and repositioned the wire.

Are you having issues with your Thrustmaster Airbus Joystick where the rudder all of a sudden flicks left/right without input? I found the issue. Open the bottom of the device and you will see 2 (two) tapes holding the wires in place. You have to loosen the tape that is holding the wire going into the handle. Then feed some of those wires into the handle to give it slack, maybe about half an inch. Put the tape back and close the bottom. Now open the handle (screws 4-top; 1-middle and 2 on bot…

Remember this stick is just a T16000 that has been around for years, reskinned as an Airbus stick. But it’s literally the same. On the T16000, the rudder axis has always been an absolute garbage and pain in the butt on an otherwise great budget stick. One has to wonder how could they not solve this when they decided to offer a new airbus design with a stick that should have already been updated years ago. To not update the T16000 is one thing, but that they left this issue while redesigning the stick for a new product is baffling, to say the least!

Just opened up the replacement stick that Thrustmaster sent me less than a year ago to replace the first faulty stick for the same reason. This “give slack to the wires” bit did the trick for me, too.

Hi everyone,
I had this problem a while back like everyone else, I freed up the cables so they had some slack so as to not pull on the Potentiometer when moving the sidestick on any axis, and it was a significant improvement.
But it has lasted only 6 months and a small amount of twitching has returned, so I had another look at the problem today fully expecting the wires to be the problem.

But I found that when assembled, the Potentiometer is not held firmly when the two halves of the sidestick are screwed together and this is actually the real problem as it doesn’t really matter if the cables become taught or move around because, if the Potentiometer is held rigid it will not receive any inputs until we rotate the stick.

Today I attached a 2mm thick piece of sticky-backed foam to the oblong surface on the side of the Potentiometer shown in the picture below, and when I disassembled it again I could an imprint on the foam padding so I knew it was firmly held in position.

I tried the sidestick back on the PC ( without touching the cables) and there is no Twitching at all on any movement or on any axis and it is all good.

The twitching was driving me nuts when using the FBW 320 and it looks as if it’s cured, this may help others if you still have this problem, it only takes 20 mins or less to try. 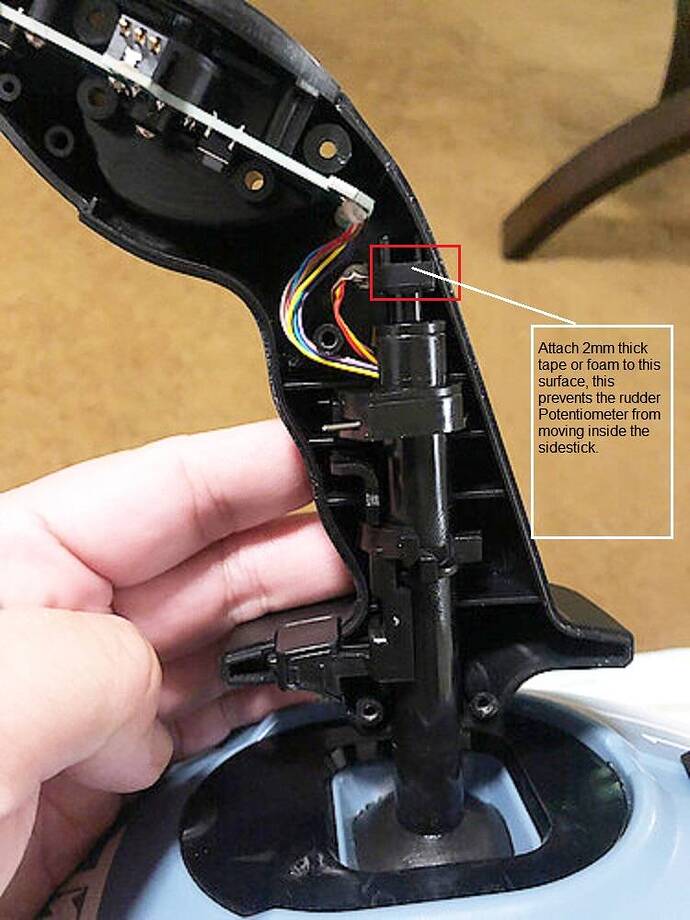 Just to confirm this has made a great improvement, not only to the take-off but also to the ground steering as I was all over the place trying to control the FBW.