Thank You Asobo and Microsoft

I absolutely agree with the OP.
This is an incredible boost in performance and experience for me on my system. Almost after 11 month of struggling with very, very bad performance, I can dive into a stunning experience. Sure there are many problems to solve and much work is to do but with SU5, I know my investment in this platform was the right decision.

The mouse was not working with the default set to “Lock” after SU5.

How was I supposed to know to go to the Options, General, Accessibility,
Cockpit Interaction System and change it from “Lock” to “Legacy”.

Searching the keyboard Controls Options for “Cockpit” displays these:
Same for the mouse. 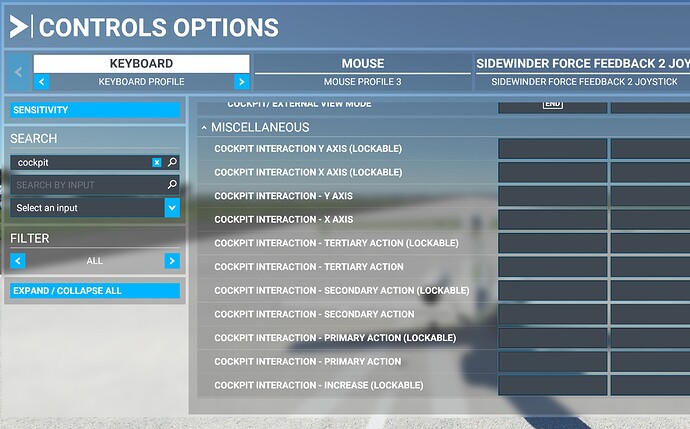 I don’t know if these options are new or not.

I have never made any changes to the keyboard and mouse Profiles.

I had no knowledge or seen anything about “Cockpit Interaction”

Come to think of it, the lack of documentation is striking across the board.
.
There used to be a job title called technical writer.
People with understanding of technology, and great writing skills would create detailed documents explaining each feature and how to use them, and also documenting SDKs.

I don’t understand why this has all but vanished for MSFS and also other products out there.

When it’s a relatively simple game like a shooter, OK, it’s not that of an issue.

Maybe this sim is to complex . Stick with Call of Duty.

Did you install the SU5 update and then just started flying?

No problem with Cockpit interaction?

My hat is off to you.

Just fly with the joystick and with no Cockpit interaction.
Just gun-it and go.

I have never made any changes to the keyboard and mouse Profiles.

Your screenshot clearly shows that you did (knowingly or unknowingly) changes: in case of the mouse seemingly even three (!) times, as you have three custom mouse profiles (they are named “MOUSE PROFILE” instead of “DEFAULT”).

Look: no one calls you stupid here. In fact, I fell into the exact same “trap” (except that it only took me like three minutes to figure out the actual problem, and not two days ;)). And I guess a lot of existing players did, because everyone has changed some key- or button assignment at some point.

Change happens. Yes, not everything is made obvious or communicated up front I-N B-O-L-D L-E-T-T-E-R-S (and even if: who is actually reading the manual ;)).

But people “storming” the forum with “pitchforks” and demanding “official statements from Asobo” (seriously!) after, like, 12 hours into the initial release, or people going into full “berserk mode” and after 5 minutes it turns out the a PEBKAC - that is usually frowned upon here by people who actually enjoy the game (and yes, I deliberately and perhaps provocatively use the word “game” here - because that’s what it is in the end: a highly sophisticated one for sure) and try to help each other here in the forum.

And if nothing else if of use: do the Bora Bora Thing™ - it really helps! Believe me

People with understanding of technology, and great writing skills would create detailed documents explaining each feature and how to use them,

I know exactly what you’re talking about. But the last time I actually had a handbook from a game in my hands (Falcon 3.0 FTW!) was in the early 90s or so (okay, to be fair: I also “stopped gaming” in the mid 90s).

And you know what else was very different back then? Exactly: “no widespread internet”! That means you got the game on floppy disks (anyone remembers those? It’s sometimes still represented with that funny icon on that button where you save your documents ;)), and later on “multimedia CDs” (with sound and, oh, movie sequences - imagine that!)

And after that you got perhaps a patch file from some CD-ROM that was coming along with some “gaming magazine”. Or the “internet pioneers” who were not afraid of costly phone bills even downloaded those patch files from some FTP server (the address of which you again figured out in some gaming magazine or so…).

But the game was “mostly finished” back then. You got what you got.

Now compare FS2020 today with the initial release: most menus are already different. The keyboard/mouse interaction changed. You have more airplanes, more airports, more scenery (okay, you wouldn’t probably document the available scenery in a handbook ;)).

You get where I am going with this: a 300 page handbook from August 2020 would only be worth its energy equivalent when you would burn it in a fire! And the same goes (hopefully :)) for a handbook released today…

So yes, times have changed. And so did games: it is a “continuous development” (for the better or worse). Personnally for games like FS2020 I think that’s the only meaningful development model, for such “monumental developments” (which are associated with a LOT of RESEARCH, mind you!).

Oh, you are talking about this here?

Thanks for the link.

Yes I’ve heard of this magic technology called the internet.
I am told it is what causes the white telephone box to light up like a Christmas tree

Comprehensive documentation for the sim itself can be online and be kept updated with each release.
Instead it is non existent for the most part, no wonder why people are confused with changes to the controls that are dropped without any type of explanation, for instance.

As to SDKs, I have seen reports from 3rd party developers explaining that they could not release updates for SU5 because of the lack of detailed documentation released to them early. Please let me know if this is incorrect.

Their are small bugs, but nothing that I cant look past.
Pre SU5, micro stuuters were a big pain in the past, every few minutes… Now its smooth all the way.

But its not the same still…the values used to show up if you hover your mouse e.g. landing light on or off. Now it nolonger do that. It just say lighting land, if you select to have the instrument label on. When “turning” the knob to adjust airspeed the value show up and again now it dont. Think its more useful than now personally…but overalll i still think this is minor inconvenience compared to larger problem others are facing with constant CTDs and long pauses. Pop up in scenery etc…

I’m just surprise by how poor the community here , and while I understand people generally like to do the best work they can and please others, but this mentality is severely compromised in a toxic customer environment which is definitely what we have here. So I hope that everyone at Asobo can stay safe. It is so hard to get rid of bad customers in gaming for some reason.

How was I supposed to know to go to the Options, General, Accessibility,
Cockpit Interaction System and change it from “Lock” to “Legacy”.

Maybe by reading the release notes? It isn´t that hard, you know?

It apperantly is too hard.

The Release Notes state how to use the new Lock feature
for Cockpit Interaction.

It doesn’t state any thing about mouse mappings required for Cockpit Interaction
with the new “LOCK” feature.

except that it only took me like three minutes to figure out the actual problem, and not two days

Your screenshot clearly shows that you did (knowingly or unknowingly) do changes: in case of the mouse seemingly even three (!) times, as you have three custom mouse profiles (they are named “MOUSE PROFILE” instead of “DEFAULT”).

You are correct. I knew that the mouse profile was showing 3.
I do not know how or when the 3 profiles were made.
Many months or years ago as far as I know.
So I claim “Unknowingly”.

Maybe this sim is to advanced your you. Stick with Call of Duty.

Maybe I should but I don’t play Call of Duty.

This turned toxic really quickly. Instead of throwing around insults, spend some time helping people who are struggling to get it to work.

Maybe this sim is to advanced your you. Stick with Call of Duty

I don’t know how advanced Hawk1ns24 is in relation to this sim but he does make a fair point. This is a complex bit of software with many options and configurations. Truth be told it has so many bell and whistle I doubt anybody has all of them committed to memory. I am old enough to remember when software came with a user manual. Even one who was such an advanced user as yourself, who clearly did not need a manual, would often keep the manual around as a reference.

I often think how much more convenient it would be to keep the sim screen open and just open the book and find some important but forgotten bit of information rather than switching apps to look for it.

I remember those days well. When PMDG released their first 737, I had the entire digital manual printed and bound at Kinkos to use. Everyone has their own experience with software like this and it does take time to learn. I am a quick learner but not everyone is. People are too quick to put someone down for their lack of technical knowledge and conversations go from productive to toxic.

On that note - if anyone has any questions or issues, I would gladly help where I can.

This is really a thanks for nothing in my case. I can’t use the sim at all after su5. Instant CTD when clicking Fly now. Waiting on a response from Steam for my refund