Please use this thread to post your impressions and feedback about the 1903 Wright Flyer.

Can’t seem to get the rudder to work, it’s bound to my joystick twist axis and works fine with everything else but no joy with the Wright for some reason.

Had a quick look/flight.
Enjoyed it.

Visual thing…
Is it right that the tubing of the rear frame seems to be disconnected?

When I flew this around a bit earlier at Kitty Hawk there was at least half a dozen other Wright Flyers buzzing around and crashing which was quite the sight. Had a few flights and on my final flight I managed to fly along the whole runway length and had to put her down before hitting some trees. Really happy this important part of aviation history is in the sim now.

You get trouble to take off the Wright Flyer ? No worry here is a quick video tutorial to use the catapult ! 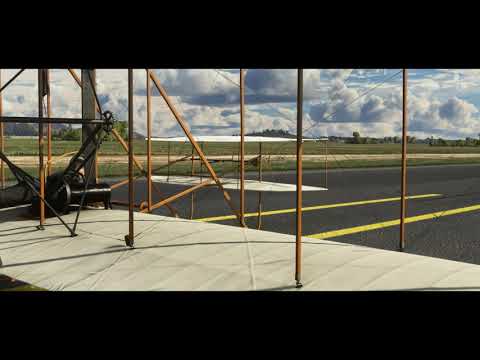 The Wright flyer is about as I expected. Really nice. Something to play around in. One strange thing happened when I selected the wright flyer and then selected my departure airport, the world map had a strange graphical issue.

I need to find an airport on a nice cliff and see how long I can keep it in the air.

what a lovely novelty. What I espsecially love is that you can crash this thing what I seem to do a lot
and it still hold together

This plane had NO rudder control!
Historically correct.

This plane had NO rudder control!

I mean, you could wiggle your hips. Also historically correct.

With wiggling the hips, the Wright brothers twisted the airfoils.
Some simple kind of ailerons.

More than rudder. But it was how you turned. Now, who is going to build the first in home cockpit?

When I choose First Flight hilltop I had the same grapical bug. According to the info I read, this happens, when you select a place, that is not flat and level.

How do I activate the catapult?

I had fun taking it on a few flights today. It’s well done and is such an important piece of history that I’m glad it’s in the sim.

However, they didn’t use their catapult system until the next year when they started doing their tests at Huffman Prairie back in Dayton. The winds were strong enough at Kitty Hawk that they didn’t need a catapult to get enough air speed.

“The Wrights completed the catapult and used it for the first time on 7 September 1904.”

The Wright Catapult. Part of the Wright Brothers Aeroplane Company, a virtual museum of pioneer aviation, the invention of the airplane, and man's first flights. Sponsored by the First To Fly Foundation, Inc.

Try using auto-rudder. In the Flyer, the hip cradle used to warp the wings was also attached to the rudder. This design was perfected in their 1902 glider. The movable rudder allowing coordinated turns was one of their biggest breakthroughs during the fall of 1902. It was apparently Orville’s idea.

Wright Flyer: Quickeviews are incorrect. View doesn’t look in the direction of the hatswitch.

The Wright flyer seems to be VR incompatible. Is it so or am I missing something?

I have the same impression.

Having the same issue. VR doesn’t work in the first flight mission.