FINALLY space-ships have arrived at Flight Sim 20! A glorious day.
I´m an absolute die-hard Sci-Fi fan since day one, no matter if it´s Aliens, Star Trek classic with Captain Picard, the best Star Trek with Captain Archer, Star Wars (with Mandalorian which is the best series since decades!) and many more.
Thank you so much for this awesome spaceship, it flies like a dream and the first great turbine/jet VTOL vehicle in Flight Simulator. 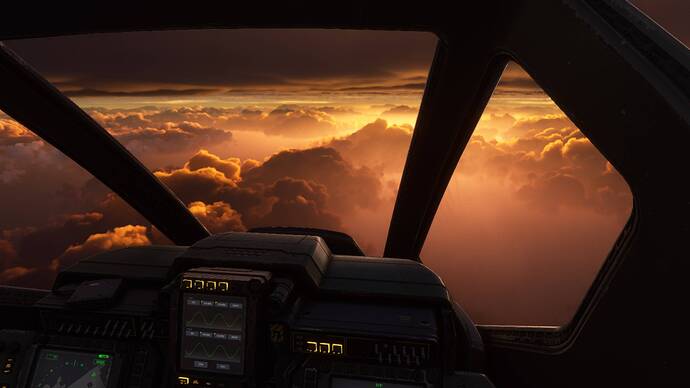 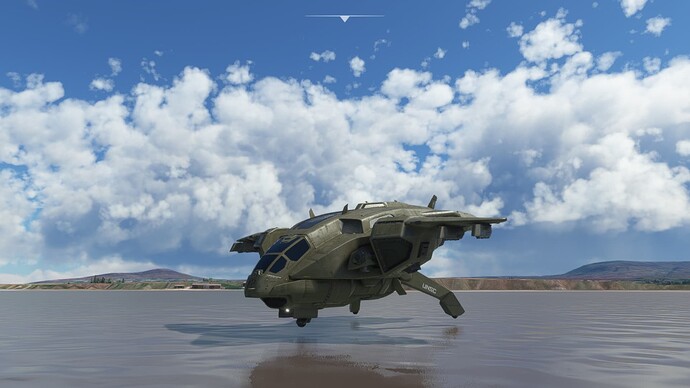 It flies PERFECTLY stable, like an absolute dream! It can hover a few inch above ground or rise above the clouds like a good Dropship should do. 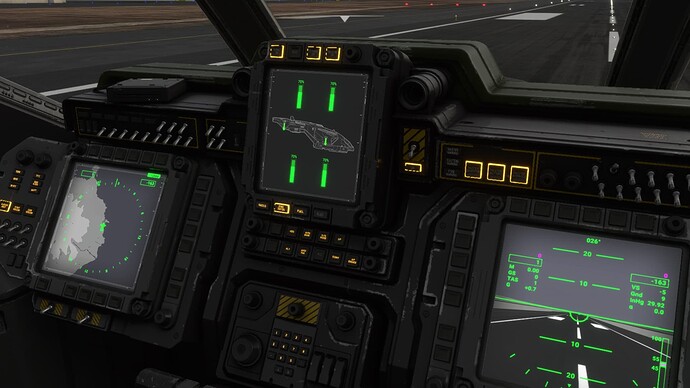 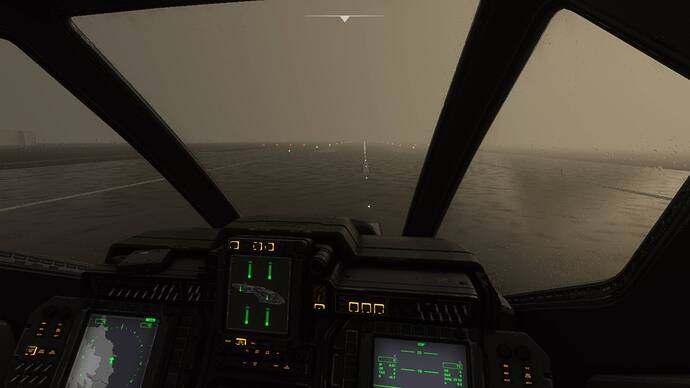 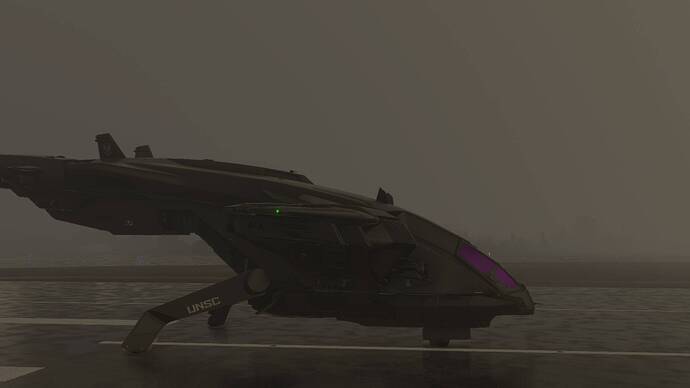 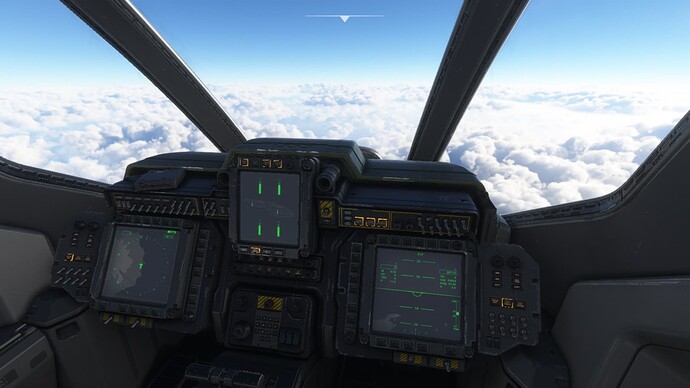 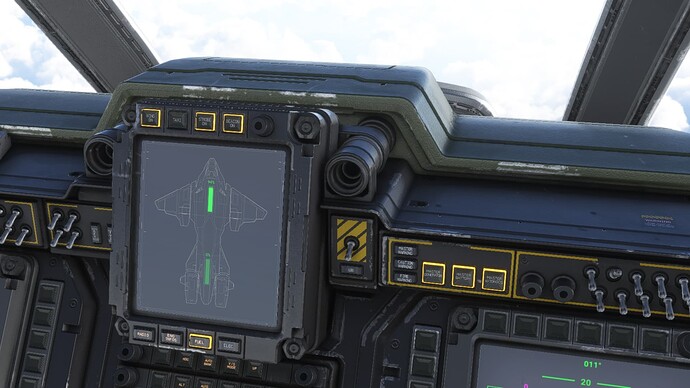 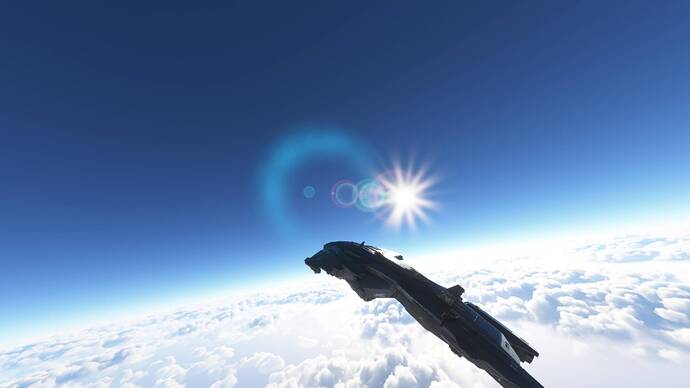 An absolute joy to fly!
But I have one idea for this spaceship: With stratospheric flight in Flight Simulator now possible please make it´s main engines way more powerful. The hoover mode is absolute godlike but when switching from hoover mode to flight mode the engines lack the necessary boost to leave the atmosphere of a planet. Please make it possible to rise up to 80.000 or 100.000 feet and more with this awesome dropship!

This DLC is cool and all of that but…
…this is a Flight Simulator, it is not suposed to be an arcade game with a lot of Sci-Fi planes and this last months they spend a lot of time working in 2 sci-fi planes and I’m not 100% with that. I think that they should work more on the SIMULATOR part of flight simulator instead of making arcade things and ignoring the “core simmers” wich are the loyal customers in long term.

I’m sooo tired that almost all the big gamming industries still only looks in terms of “today” or “just tomorrow” instead of thinking in the loyal base of customers that they are going to lose because of that kind of “only looking for short term” actions.

Totaly agree with this. MSFS is a flight simulator not a space game. Adding these kind of things lowers the tone of the simulator and makes it a more like a game. X-Plane would never do this.

No one hate flight sims more than flight sim fans evidently. Only seriousness no fun allowed.

And before you people jump at me, I only play on vatsim personally. But this notion that the sim has to be exactly tailor made to only my specific use scenario is beyond short sighted.

I’m gonna stick with my Trislander and the MG Hjet, thanks…

He wanted space ships and is having fun with it. That’s good. I get my stuff in November.

No one hate flight sims more than flight sim fans evidently. Only seriousness no fun allowed.

And before you people jump at me, I only play on vatsim personally. But this notion that the sim has to be exactly tailor made to only my specific use scenario is beyond short sighted.

By this logic, any one genre of game/ software is short sighted. Shooters should have city building mechanics and flight simulators should have magic and monsters. It is OK to say a simulator, should be a, well… simulator.

It’s like saying “ooh, this football game is all seriousness and no fun is allowed because I cannot take an axe and fight the opponent”

I really miss the Wing Commander series.
Could you imagine a remake with this tech we have now?

This DLC is cool and all of that but…
…this is a Flight Simulator, it is not suposed to be an arcade game with a lot of Sci-Fi planes

Some quick reminder that FSX had an area 51 mission with alien ships all over the place, that there always were mods featuring stuff like the X-Wing when it comes to all flightsims and that one does not have to download such stuff if he/she/it/whatever doesn’t like it.

I think that they should work more on the SIMULATOR part of flight simulator instead of making arcade things and ignoring the “core simmers” wich are the loyal customers in long term.

Did you by any chance watch a single Q&A? Doesn’t seem like. For this single thing Asobo, which is the company behind the core sim did put likely 0.0001 effort into this thing as the mesh and animations were already in place if they just reused the model.

It’s always other teams working on such add-ons and not the core sim team which focuses on the simulation itself.

On top, iniSimulations A310 will be part of the simulator for free in November, so what even are you talking about “ignoring core simmers”? - it’s one of the most detailed airliners around on XP already!

To say they ignore simmers is a bit much…

I would have prefered it if they would put their rescources into fixing bugs.
For example the VR windows bug that they don’t wanna fix until August! What a joke.
But they seem to have time for silly spaceships.
I hope that they at least got a lot of money from Microsoft to shill the HALO franchise.
Other than that, it’s a waste of rescources.
If they want to do something with space, they could have done a Space Shuttle landing challenge for example. That would be something the community probably appreciates more.
Or, well… fixing bugs.

Same for you, it’s different teams and different tasks. Asobo did not create a single aircraft since the Husky I guess. It’s always partners doing the aircraft and scenery stuff. Asobo does bugfixing and improvements on the core simulation exclusively.

Guys… building such a 3d model and giving it some flight characteristics is probably a joke by Asobo referencikg Halo by the same publisher. Possibly a Halo fan at Asobo or a MSFS fan at the Halo team did that at home, I wouldn‘t be surprised. Even if it was done at work, god, a couple of hours… it‘s not a required download, it‘s not changing the sim. There are some of those things flying around now, they will get boring again soon… really, no reason to get angry lol… take a walk with your dog if you have one

that makes more sense than hating a spaceship

To say they ignore simmers is a bit much…

that would be my only complain about this. I’m a gamer and happy to have the opportunity to fly this for fun but it should be removed from multiplayer (or have an option to disable it)… I was setting up my 737 and looked out the window to my left and I saw that spaceship , immersion was suddenly inexistent lol…

Yes. Totally agree, but as I said it has been this 2 sci-fi planes in the last month, while we all know that there are still a lot of things pending to do.
It’s not the problem of the sci-fi planes itself, it’s the context and timming when they have been released.

As mentioned I can’t disagree with this at 100% because it’s cool to have more things to do and it doesnt break the game but… I still have the feeling that the timming of the releases are making the MSFS look like a joke of simulator.

Yes, I have been watching. But still, 0.0001 work that could have been used for improving the systems of other planes or lending a hand to other developers. I’m not thinking of “Asobo as a whole”, I’m thinking in terms of “this part of studio dedicated to model the planes are working in this and this, and fixing this other thing”
And again, I’m also talking about the image that this kind of close realeases give to the “core simmers” and the community in general. I’m saying what I THINK about the current situation, others will have this own oppinion about this and they are oppinons. Mine are that I’m not 100% agree nor 100% disagree with this, I find it cool but… I don’t like the timming of the releases and the image I think they are giving of Microsoft Flight Simulator doing this releases NOW.

It’s not the problem of the sci-fi planes itself, it’s the context and timming when they have been released.

The timing could not have been better because we are currently planning to do a lot of Sword & Planet Sci-Fi in the future, and what could be better than having some awesome immersion in Flight Sim 20?

and Tod Howard has presented probably one of the best games ever, Starfield, a few hours ago.
A lot of great study-level airliners will follow too so hardcore-simmers also won´t be disappointed too.

Oh yeah. I almost forgot that this “summer fest” thing and gamming presentations is having a lot of meems about Sci-fi space games XDD (I didn’t watched it, I had only seen meems on twitter)

It’s like saying “ooh, this football game is all seriousness and no fun is allowed because I cannot take an axe and fight the opponent”

This is a good analogy. And then people would say what’s wrong, just don’t use it if you don’t like it. Nevermind that in the game basic mechanics are missing. You can do stuff like that if the base game is somewhat done.

The timing is unfortunate too…2 complete fantasy arcade stuff within…what weeks? But to be fair the maverick stuff was planned for much earlier, so it would have been spread out.

Oh well, Jorg gotta get his player numbers up, never mind how long they stay. Do we really think any significant percentage of Halo players will suddenly discover their love for flight sim? Or will they come, buzz around their house laugh and move on to the next thing.