OK so I was hoping u fellas could help me crack this one. I have been thoroughly exploring Spain since WUVIII was released and I have come across something I can’t wrap my head around.

I was getting ready to fly in and around the city of Saragosa, which seems to be one of the country’s most important cities, to marvel at some of the newly released POIs in that region. Now, as I was setting up the flight I noticed that the map shows what appears to be a medium-size international airport (LEZG) west of the city but for whatever reason I could not depart from it. For a moment I thought “well, I guess you can’t have every single airport on the planet” and I moved on. But then a second later I noticed two much smaller airports in the area that are in fact playable: 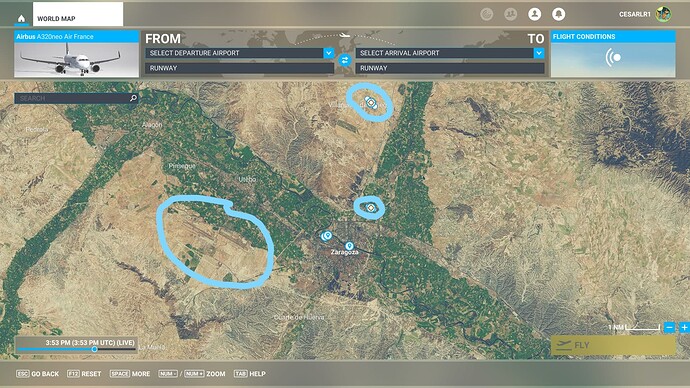 Then things got even weirder as I zoomed in on that satellite image of LEZG and the airport got completely blurred out as you can see in the screenshot below. 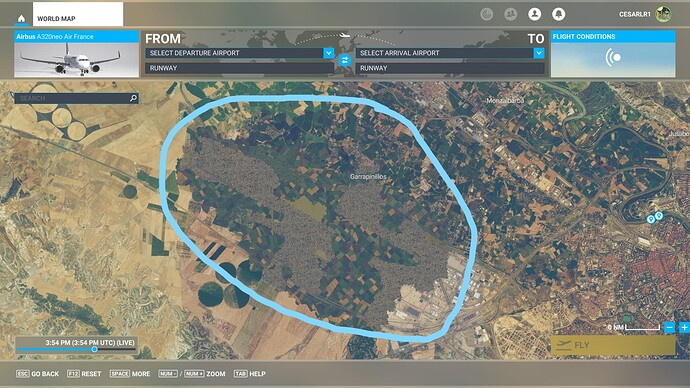 So I guess my question is, what is the deal with LEZG? Why is the game seemingly intentionally trying to hide it? I mean, why would MSFS make the decision to make those two tiny airports playable while keeping LEZG under lock?

Maybe some of you have an explanation, so let’s hear it! I am genuinely very curious.

I am not from Spain but I googled LEZG and I could see that it is home for the SAF.

Any airport with military aspect and not part of the public data (Bing etc) is not represented/rendered in the sim… There is one for example in southern France, and it is also replaced with generic textures.

Same case than LEMG, shared airport with civil/military, but I don’t know why not create the civil part like LEMG.
A pure military airport for example is LETO or LEAB.

This shows you the kind of garbage the sim team has to deal with for world updates - a conflicting mess of regulations and limits based on differing ideas about “secrecy,” “security,” whatever all around the world.

Google Maps shows the airport better than Bing, but still blurred and lower-res than the surrounding city. Since this was once on the list of Trans-Atlantic Abort sites for shuttle launches should something have gone wrong during a launch, you would think there has to be better images for pilots to use training.

A quick internet search returns a number of historical USAF approach charts, too, but no modern aerial imagery.

Hello, here is the Zaragoza Airport, 5 city of Spain.

This is my city, not what’s in the game.

Yes that’s a shared civil-military airport. The military portion is one of the main’s airbases in the country.

Disabling some military airports in game is a pity but yeap it has no sense in some way. At least the field should be there, even if it’s not true to life. They would use generic hangars and buildings anyway so that does not reveal anything sensible in terms of security which can’t be found just looking at google at the end of the day. Info about the base including pictures can be found in internet or at the official Air Force website, as in most cases with any other military areas worldwide provided that they are not secret bases.

Thank you everyone for getting back to me so quickly. I think you guys are right. The military base thingy explains it.

Hi fellas! Wondering why is still missing this AirPort. I am playing in Series X, and i can not download Air Hispania Mod about LEZG. Can someone explain me about this or if u know something about. I will very thankful about an answer about this. Cheers!

If this was implemented it would have those airports as people would add them.

Os old simmer I have been using AirHispania LEZG in other sims, but with MSFS I’m afraid that in any update becomes not compatible and we don’t have the basic airport.

In the UK most of the RAF bases last time I checked, were there, both on Bing and in the sim.
All you get though in the main is the basic runways and no Asobo animation such as ground traffic.
Some of the bigger ones are animated such as Lossiemouth in Scotland but the modelling is very basic.
I doubt Asobo are blotting anything out because it is military. More likely is they are leaving it out. Similar to the massive trees everywhere, end of the day you can only model so much. They hide where the modelling ends.

The problem comes from Bing maps where many military airports are hidden.
Because of the automatic scenery generation if the airport is hidden in Bing maps there is nothing to generate, and they dont make it by hand…

In Google maps LEZG is not hidden, is blurred but the runways are visible

Anyway, even if these airports can’t be done in game, it would be good practice to hidde them with nicer/proper textures, as these generic textures look HORRIBLE, and catch you eye inmediately, breaking inmersion so hard. Please Asobo, make texture patching better.

This is a way to solve this, but requires work (manhours):
Posted in August 2020…

Xplane has an excellent system where they allow the community to develop different airports and submit them in a centralized system. Once approved for quality, they’re pushed as default airports in the next update iteration. We can take this a step further and also include landmarks/POI’s which can be developed by the community and approved by Asobo or MS, which then can get included in the next update iteration. I was wondering if MSFS has any such system in place or has plans for any such sy…