I’m getting a problem where if I have the transponder loaded, the Sim takes forever to load. When it has loaded up, the avionics are black. If i shut it all down and restart without the transponder, I have no issues at all.

I’m waiting on a reply from the developers, but thought I’d see if anyone else has run into this problem?

Wait, WHAT they finally released it !!!

I just installed it and the Transponder wouldn’t start at all for me. Well, it started, but crashed so while it was running, it wasn’t working. This was because I had a flight plan in the MSFS flight plans folder. Deleting the flight plan fixed the Transponder startup issue. I’ve logged this as a bug.

The bug you describe I’m not having though but maybe make sure there are no flight plans in the /Microsoft.FlightSimulator_8wekyb3d8bbwe\LocalState anyway (that’s the standard Windows Store version flight plan folder).

Wait, WHAT they finally released it !!!

It is in early access. It is a very polished looking app that’s for sure. Hopefully they release a version of the Skypad on a real iPad one day.

Yea i just purchased and flew my first flight… No issues so far. Im going to try using a flight plan and see what happens. I cant believe they released it, I’ve been waiting for like 2 years!!!

Tried that and it didn’t really do much. It seems uninstalling it and re-installing it might have done the trick. No go slow and avionics seem to work so far.

Can someone compare it with NeoFly?
Does it offer some immersive features like voice as in NF?

Yeah, it has voices like NeoFly, though I’m a bit bothered a\bout spending money on something that doesn’t even seem to have a dedicated forum, and the Discord link from their website is currently broken…

Edit - Found it, eventually. I’m still holding off on buying it though as, apparently, cargo currently does not weigh anything…

Okay, had a look at Skypark. It’s quite an impressive add-on, but there is still a fair bit of stuff to be added. I did the tutorial flight (I did mine in Botswana) and then looked at the available contracts. Right now, you have to teleport between airports, but I’m sure I heard one of the devs say they are going to change that, so that you can look for jobs starting from the airport at which you have just arrived. I also like it how I was able to fly any aircraft that I wanted, instead of having to start off with a Cessna 152 like I do in NeoFly though, at the minute, I still think NeoFly is the better, more polished option…

More about Parallel 42’s The Skypark: 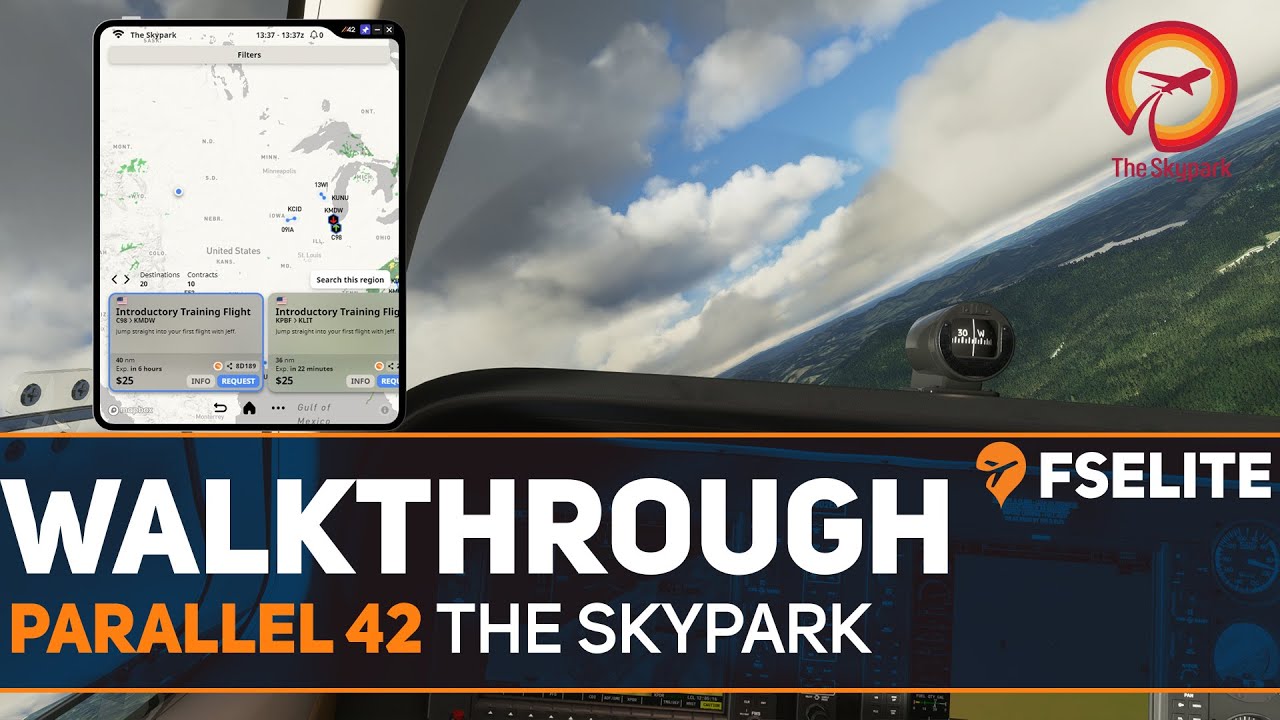 If you just want to get some direction in your flying, I feel that SkyPark and NeoFly are quite similar. Mostly mission generators with good interfaces. No real aircraft management.

On Air is the most similar to FSE but always felt that FSE required me to do the same routes over and over again where I travelling throughout the world with On Air. Great interface. As much or as little airframe/pilot/aircraft management as you want.

AH2 had a terrible UI and confusing gameplay. Gave up after a few weeks.

I am currently flying with Skypark and Neofly and really enjoy both of these products.

I bought sky park yesterday and had a quick run. It seemed pretty cool and definitely a better UI than AH2. Also the focus on flying is great.

What is not so great is that today there was some kind of update and I could not get it going properly after that. Screens took up to 10 minutes to load and it hogged my CPU to 100% the whole time. I spent two hours - yep 120 minutes trying to take a flight , rebooting my pc several times, trying different launch sequences, but CPU remained over stressed to the extent that even Ctrl Alt Delete for task manager took upto 10 minutes to pop up.

Not sure what the update was, and I haven’t changed anything, but it was sadly unusable.

One the one occasion I managed to load a flight, the displays of the aircraft wouldn’t switch on. Very bizarre and given my experience in the lack of stability of this game, I am tempted to suspect yet more issues with MSFS rather than Sky Park. Anyhow I would caution against investing in this addon for now especially if you have experienced high CPU load, or the game locking up generally.

Purchased the app, ran the update and completed my first introductory flight from 42A to 11A. All smooth here. The thing I like the most of this app is that now my flights have a sense of purpose. Voices are cool too, I hope they keep them varied.

I only heard some radio voices during the introductory flight. Did I miss something?

Yeah, truth be told, I’m actually going to do the same. Did some flying in Argentina today, with Skypark, and missions DO generate from an airport that you’ve just flown in to, so that’s cool. Can’t wait for the Skypark devs to add more ferry missions, and add the passenger missions that are currently grayed out. Also, my concern about having to ‘teleport’ between airports is kind of unnecessary as, if I’m that bothered, I can just manually fly to the new airport in MSFS2020…

Yeah, I noticed this as well. Overall, It think the sound effects are better in NeoFly, and you also get voices in all missions in NeoFly, which is nice…

I’ve been having that exact same issue. Once I start the Transponder the whole sim takes forever to load. And blank avionics when it finally did. I’ve started a ticket with the developers and they’ve been very receptive but don’t have any solution as yet.

I’ve been using Skypark for a few days now. On my last flight, I heard the loadmaster say everything was secure which was new for me. Most of the time it’s just the clip sounds. It sounds like the devs have a bunch of stuff to add so I am hopeful for this product. I have not had the issue you guys reported.

Thanks for sharing that is very good to know I am not alone. I I’ll also open a ticket so they know it isn’t an isolated incident. I do hope they sort it as sky park is undoubtedly an easier access concept that other similar produxts. I was looking forward to doing some flying in parts of the world i would never think to go! Cheers!

One further observation: there did seem to be some weather/cloud graphics that I didn’t notice before, fast moving across the map on the sky pad. Perhaps they have something to do with it ? (Although just loading through the transponder was painfully slow)

I have noticed the clouds on the pad too but I assume they are just some graphical effect and have nothing to do with the real weather conditions.