@AltGraphic many thanks, I really hope to find time for the VD guide these days.

Thanks. I’ll try that.

45 minutes is what the forum suggest the read time to be for this thread, I beg to differ🤦‍♂️. My god is there a wealth of info here. Thanks to Tony and all others for this thread.

Seems like v24 is still the best version (when I read other threads). I am on v27, do you know how to step back?

It does sound like you have got different behaviour and I’m keen to get your method working to see if I can benefit from it ( I know first hand the value of running a low render scale and then upscaling elsewhere - before I got this PC I was running with integrated graphics, 2d 1080p at 50% render scale (effectively 540p!) and then applying heavy Radeon Image sharpening to get a decent result!)

I noticed that when I increase the SS in ODT, it does impact the render resolution numbers shown when adjusting the render scale slider in FS settings, and therefore it is not so surprising that the performance and visuals are similar no matter how this resolution is achieved. Do you see this? I wondered if maybe you do not see this, and somehow your oculus super sampling is applied at a later stage (a bit like my Radeon Image Sharpening in my old PC.) Thanks!

EDIT also:
FS settings mostly high
Default oculus FOV (I found I could notice the edges if I adjust below 0.95 so I often just leave it at 1)

I’m running on v26 absolutely fine, however here a link to @michalopole818 's guide incl. reverting back to V24:

My dudes, I wrote some instruction of how I get awesome performance with the mfs2020 in vr, and there’s part how to revert to v24 (as it’s huge change in perfomance between v25 …) and how to keep oculus from force update. Enjoy.

I’m getting “reset” flashes in VR. Don’t know what they are called, but seems like quick flashes of the entire picture. Really annoying. So I am switching back to the OLD nov. Nvidia driver and trying with v24 and go from there. It just seems still a lot of work to make this work.

@RebuffedBee9595 it’s true that looking at the VR render scale resolution shown in FS, the figures look similar, but the rendered image goes a completely different way. Let’s do 1 by 1: 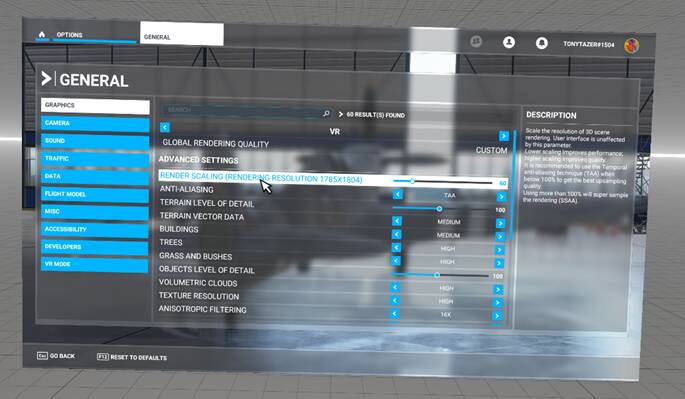 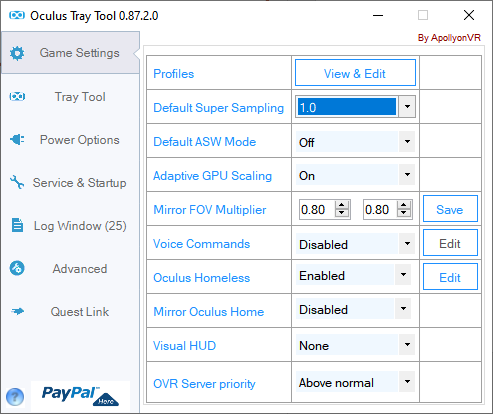 You can immediately notice in the menu, that it gets unbearably blurry. Note this doesn’t improve when you increase Render Scaling as per step 3. The menu and the matrix lines stay thick and blurry. 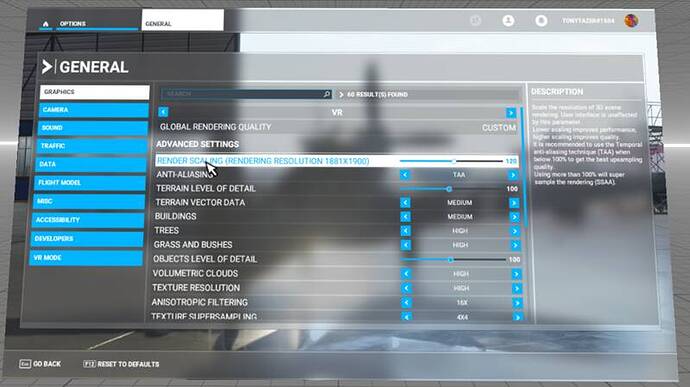 Now to the most important part. The results of step 3 in the cockpit look (despite an apparently very similar rendering resolution) completely different. It’s way more blurry AND slower on FPS! The VR mirror screenshots are not really reflective of the visuals in the headset, but please just check the gauges in the Spitfire:

Thank you for confirming. I wonder why I see the same image/resolution impacts as you but without the FPS benefit . I’ll download OTT and try applying SS there instead of through ODT to see if it can be different

By the way, reducing FOV is really of great help. I’d suggest you still try a few settings, maybe keep vertical at 0.95 and just reduce horizontal to 0.8. It really helps over-proportionally as it cuts away the barrel-distorted area of the image, which is computing heavy.

Thanks, yes I have those settings. I have just redone some tests and again see the same with OTT as I did with ODT - so similar performance+quality between 1.6+60%, and 1.0+100%. FYI the test I did was the Toronto landing challenge in the TBM, I am usually bouncing between 31-36fps. If I bump to 1.9+60% it is more in the high 20s-30 . I wonder why you and others see FPS uplift from the Oculus SS method but Flobud and I do not. (PS I am very happy with this performance by the way , but like us all am always interested to find any more “free” resolution or performance

Hmm, sorry to hear that. Maybe it’s the photogrammetry in Toronto? Can you do me one favour? Take your favorite analogue plane without any EFIS (e.g. a Spitfire if you have it!

) and take off from EGOD in Wales. Head south along the coast to the big river mouth and follow the river eastwards to the north entrance of the Mach Loop. And then, if you’re not familiar with the Mach Loop path, just get lost somewhere flying low in these beautiful valleys. Try LIVE weather. It’s so lively up there, you can have rain and very low visibility and then suddenly a few miles onwards it clears up and you are chasing rainbows. And if today’s weather turns out as really too ugly, change in flight to broken clouds or clear skies. I would be curious to hear back from you what you say around performance and overall experience there…

That’s why I love your tweaks! Thank you!

You should better display the Debug windows using the DevMode ON. It will show the Game render resolution, and the final resolution send to the headset drivers.
The render scale is computed on the latest, so the idea is to keep at least a game render resolution equal to your headset native render (or more). E.g. you can perfectly have render scale really low, like at 50%, if your final supersampling is equal to 200%, you will not lose any render pixel regarding your headset, and the image will be reduced by the headset drivers, so will be super crisp. I already posted this below regarding my Oculus CV1, but it help to understand the math and the GPU usage. The base line is at the middle with TAA 100% and no supersampling (x1.0): 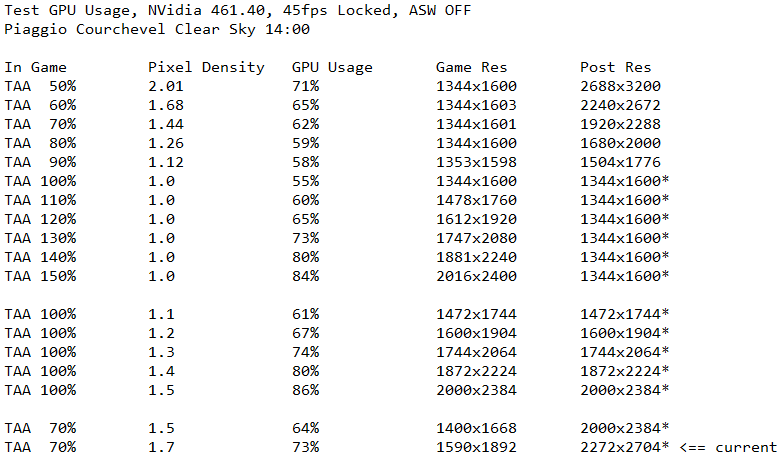 HAGS absolutely off, it causes a lot image distortion in my rig

) and again found the same performance at 1.6 60% and 1.0 100% (of course much higher frame rates than the TBP Toronto landing challenge - about 45 on the ground and 36 in the air). In the spitfire I do definitely note a sharper image on the instruments using the 1.6 60%, So I am seeing the sharpness improvement but not the FPS uplift you describe. However sharper image for same FPS is still good so I will keep these settings

I wonder if the FPS difference is due to our CPUs and your AMD utilising the cores/threads differently. For me I find FS maxes out just one of the 20 threads with the others only partly utilised. Also it looks like the oculus tool runs on a different thread, so maybe this method splits the workload better by doing the supersampling on a different core/thread and saving resources on the FS thread (I have no clue how these things work so this is pure speculation !)

@RebuffedBee9595 Hmm, i just checked again your specs in your post above and noticed that you’re running on Oculus v27 Beta. I have been using this version after the flashes started in v26, but this was cured and I’ve moved back to v26 (switched Beta off and it reverts automatically by 2 updates) and it’s really running awesome now.
I did so primarily, because v27 beta locks the refresh rate at 72hz, causing FS to run mostly at 36fps. With v26, 80hz work and FS tries again to settle around half the refresh rate: 40fps - successfully! Maybe that’s it? Give it a try, it’s easy to go back to v27 beta if you have to, but I don’t think you will.

Otherwise I would be really surprised about your rig running slower. The higher single core speed of your Intel should normally beat my Ryzen in FS hands down. Abd on top you have the 3090, so it’s definitely a better PC for FS.

this is correct, only the software.

Ok… I finally gave your settings a go. After having months of issues i finally go something that worked pretty well, but your post kept itching at me to have a go.

As instructed, I ran through your setup. The only key difference is im on a 3070 and the using the drivers that came out on the the 30th for Nvidia. Even though you say turn HAGS off, i believe i have to have on due to the current driver issues.

So First impressions: I definitely got an FPS bump of about 5FPS. that’s huge from where is was sitting. so for example : YSSY 18FPS - 25 FPS, small regional airports from 31 to 36.

But thats where the fun stops for me and the issues started arising:

I really feel you are on to something here and I’m encouraged by your effort. Please keep your insights updated @TonyTazer1504