Try push it to 32FPS and check the difference

Since I fly the freeware H135 helicopter with the Quest2 a lot, I need to use ASW so that I can rotate in yaw very smoothly as I hover. I find that smoothness in setting a “locked” 18 fps (1/5 of 90) using Oculus Tray Tool since ODT doesn’t have that low of a setting. I would like to really have a 1/4 of 90 = 22.5 but Apollyon forgot to include that. Does anyone know how to send a “ASW locked at 1/4” command to the Oculus system on the PC 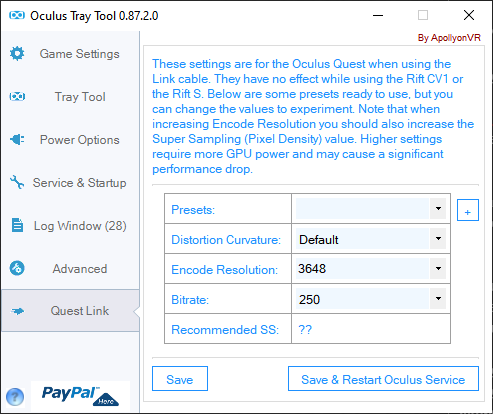 Hi @Jingle1966 you’re absolutely right. My tutorial on top is unfortunately a bit outdated by now, even if the core approach still applies. For now, I will add some comments to this screenshot to make it more clear.

as I also just wrote in the BEST FB group “Microsoft Flight Simulator 2020 Virtual Reality”, I’m very glad to see my old tutorial and this great discussion still alive! The tutorial on top is a bit outdated by now, because both the sim and the Oculus software made such a great progress. Still, the core approach remains the same and luckily there’s a great community in all the comments here keeping it up-to-date with all recent developments, findings and news… IMHO the original guide on top is still a great approach, primarily for the non-high-end GPUs.

With my 3080 and after all the MSFS and Oculus runtime updates and just recently adding the NIS scaling shader tool (link below) I’m blessed to run the sim by now at 100% render-scale AND 1.85 super-sampling with a headset resolution of approx. 3150x3000 and an MSFS in-game render resolution of approx. 2500x2400 due to NIS (don’t have the exact numbers at hand now) and it’s just fantastic. MSFS locked at 30fps in the Nvidia panel, no ASW, butter-smooth and very, very clear, down to the smallest fonts on the Garmins etc.

I really recommend to give the new NIS scaling shader as my latest “VR toy” a try (link below). The only thing is: it runs only via SteamVR (actually OpenVR), which adds one more layer of prep work:

The launch sequence with the NIS scaler tool (important!):

I have my NIS scaling set at 80% and sharpness at 40%
(note: when using NIS, it makes sense to disable the Link sharpening feature in OTT/ODT. I know it looks fantastic, but here together with the NIS sharpening it gets too much and a bit “crumbly”)

I know NIS is now yet another tool and layer, but at least for me the results are certainly worth the hustle. Very keen to hear from you how it works and performs!

Thanks for all your info! I’m a little confused though since I thought the NIS scaler worked without SteamVR even on the Quest2

Yes it should work with any OpenXR runtime, including the Oculus one in your case.

Yes I confirm not need steamVR with oculus quest 2, I am using too without steamvr.

I didn’t understand what rsolution you set inside your oculus and freq.

Hi, it’s all great. I’m wondering if raising the in game rendering will make the experience more crisp without lowering fps

In-game rendering has a high impact on FPS, so if you raise it you will definitely see a performance decrease. It’s about finding a balance between rendering and performance.

I run a 1080
So now I’m looking for best in game settings. I’m always at a loss on which would be more important than the next. Would be great if there was a settings table!

I tried to start a collection of user settings, so that there was a centralized repository you could search to see how people with similar setups were configuring their software. Unfortunately it didn’t gain any traction.

I’d like to start this thread as a way for us reference other people’s setups. I think it’s a good way to see what works on PCs with similar specs. I see so many posts where they have settings, but don’t mention what driver, GPU, etc. they have. Hopefully this thread can address that problem. At the very bottom, I’ve added subjective performance measures. Obviously, YMMV since even similarly spec’d PCs will still have software and OS differences that will impact performance. I use Link/AirLink…

I have found that the type of plane also makes a difference to FPS. For instance a single prop with a simple navigation system will have much less effect on FPS than lets say the FBW A320. I am also finding some airports have much more FPS affect than others. Overall, keeping clouds high and LOD’s at 50 then most settings towards the top on medium and the bottom lower it seems to work ok. It really is a fine tuning balance.

Has anybody tried the new Nvidia update 511.23? it seems to be pretty good in VR…

Thanks for all the tips.
Regarding the fov when following the guide. If I put less than 0.95 I have really big black box on the side… I don’t know how you can put values around 0.75 or 0.8.

I am the same regarding the horizontal fov. I think it depends on your face shape, iPd, gasket, how close your eyes are to the screen etc. When I used to use link I could only reduce the vertical fov (now using virtual desktop instead)

Finally managed to reach a not too bad compromise…

My issue is that when I move my hezd, textures get blurry and become sharp when not moving.

Any idea what can improve this?

I am using Air link without steam VR. Is steam vr better? What about virtual desktop?