Too many windmills outside KPSP (Palm Springs Intl) 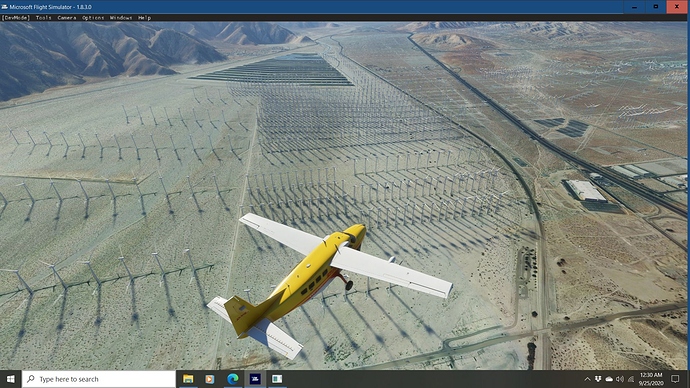 Isn’t this quite realistic ?

ah now i see. yes there are two many.
but i think they grap the data from open street map (saw it on other occasions):

OpenStreetMap is a map of the world, created by people like you and free to use under an open license.

Someone was to motivated with placing windmills there.

Screen_083840×1600 1.8 MB
Just to be more precise:
The windmills are much too big and many of them are placed too tight. A windmill head can turn 360° without touching the neighbours blade with a safety distance!!!
To get the right size just look at the last picture which shows the shadows on the ground from the satellite picture and from the shadow. I was not there at the same time of picture, but you can quickly see that they are at least double the size than the real ones.
Analysing the ground pictures should help to place them correctly.
Flightsimmer845 May 2, 2022, 10:38pm #10

I just purchased Palm Springs Airport. Taking off the first time on RW31 I noticed something strange on the horizon. I discovered this windmill bug. Searching the forums this issue has been reported yet nothing changed. The airport I bought suffers from this and I cannot get a refund. Flying there is a no go having to look at this:

I’ve definitely encountered this same windfarm. The problem here is that Asobo doesn’t know what size the windmills should be. In this windfarm, there are at least two sizes, one of which is significantly smaller which would prevents the craziness in your screenshot.

An overhead of part of the facility near the airport showing the smaller vs. larger windmills. 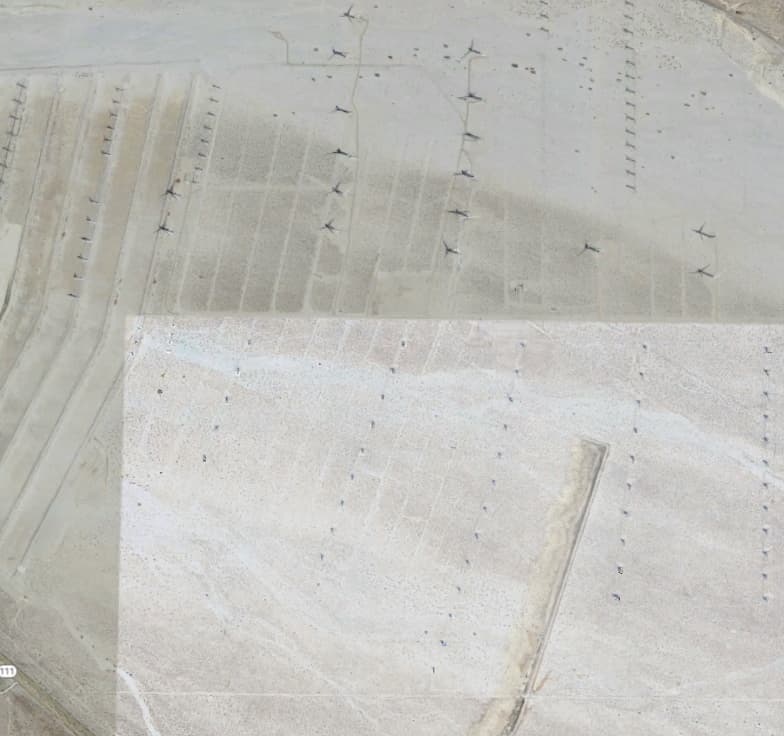 Another satellite image of the two different sizes together: 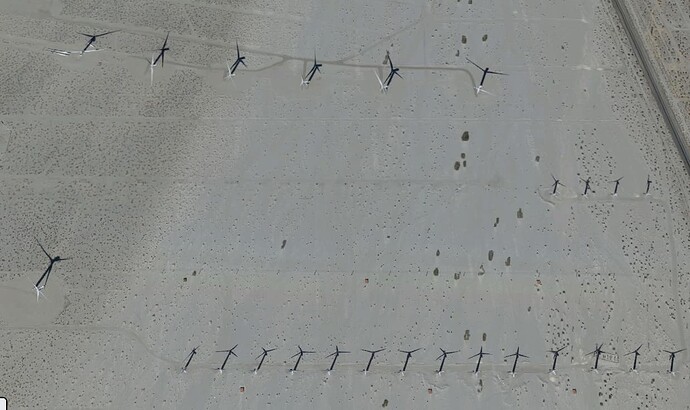 You mentioned it’s already been reported so there’s probably not a lot we can do, but if it’s a voting thread be sure to vote, I’ll do the same. It absolutely destroys frame rate and looks ridiculous.

I have made a mod that replaces the default turbines with a smaller model, maybe can help 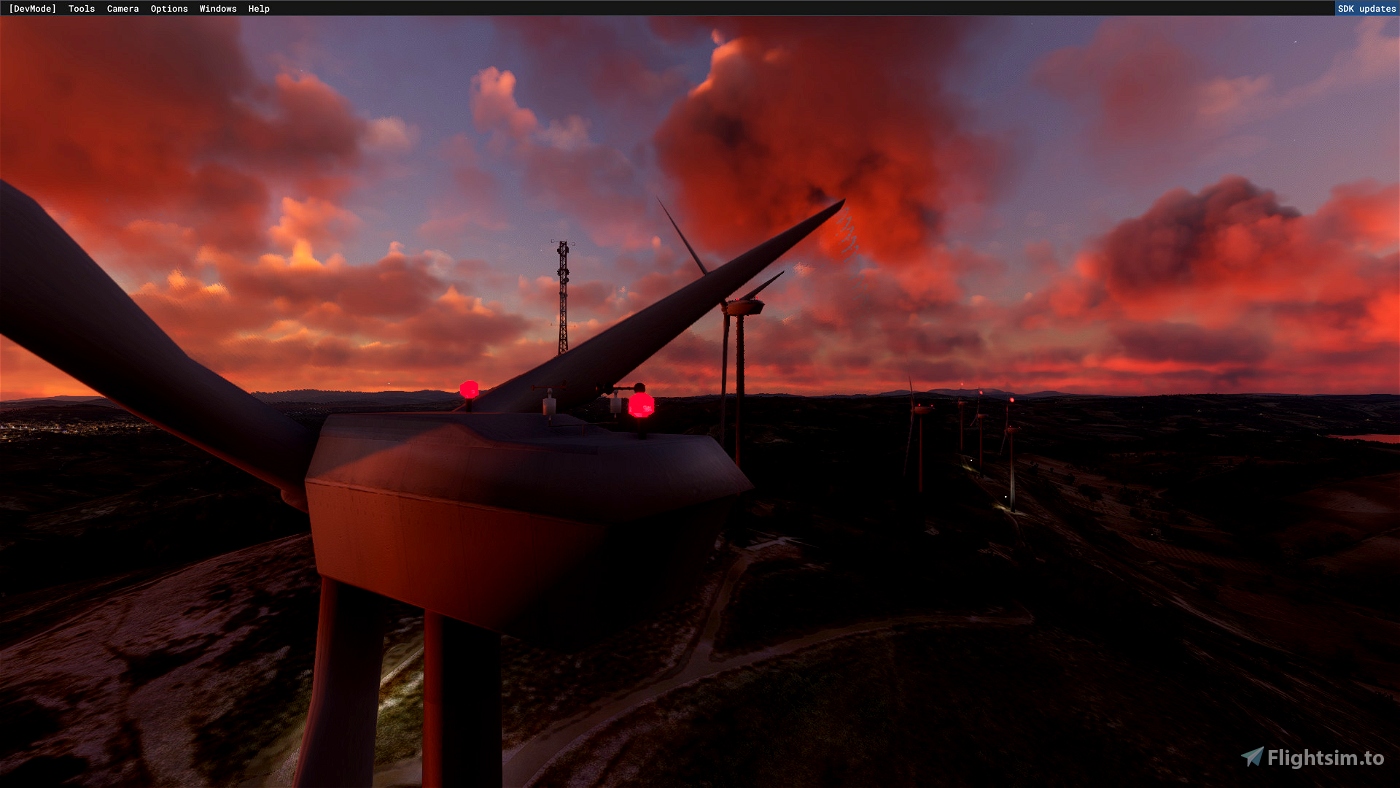 ✓ Default Wind Turbine replacement is a Microsoft Flight Simulator 2020 mod created by mamu82. Download for free to enhance your experience in MSFS 2020.

IRL there are a LOT of windmills in Palm Springs. They are located in an area where it is almost constantly windy and strong. For me the windmills aren’t breaking immersion. They are a blight on some beautiful landscape.

Also windmill technology has changed significantly over the past few years. The first “wave” of windmills were somewhat short with small propellers. These earlier models are being replaced by much taller windmills with much larger propellers. MSFS should display various windmill sizes.

Without data, the only reasonable solution Is making them all equal (thus the wise Asobo decision)

OSM has some data about the turbine size, but not enough to make a comprehensive mod

and you’ll have a mod

I think I can help!

Not global, but this contains all of the data on US wind turbines. It can be mapped on ArcGIS as well, but the raw data is probably what you’re after, they have several formats incloding GeoJSON and XML which can be downloaded for free. “The latest release includes data on 71,666 turbines covering 44 states plus Guam and Puerto Rico.” It is kept updated, with the last update being last month. (It does cover the Palm Springs area, thankfully!)

Here’s a link to their data dictionary which explains what all of the fields mean: https://eta-publications.lbl.gov/sites/default/files/uswtdb_v5_0_20220427_codebook.xlsx

Of note for sim: xlong, ylat (both self explanatory) and:

I hope that helps, I’d love to see that data in either WeLoveVFR or one of your packs mamu!