Something that fascinates me is the origins of manned aviation, and the accomplishments of those early pioneers who trail blazed todays modern air routes. I have recently been reading about the Transcontinental Airway System, established in the 1920’s as the first airmail route between the eastern and western coast of continental North America. 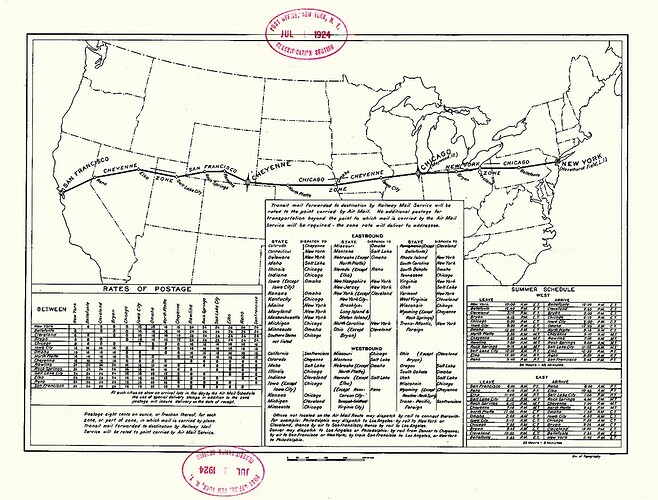 Upon it’s inception, light beacon towers and giant concrete arrows were constructed along its length for pilots to visually navigate via as they crossed the continent, low level, the likes of Curtiss JN-4 Jenny biplanes taking between 32 and 35 hours depending on the wind!

Using Little Nav Map, I’ve recreated the original route (westbound) for MSFS and am planning to fly it over several days next time I get a decent block of time free off work. I thought I’d upload the flight plan both in it’s entirety, as well as broken down into more manageable sectors, for anyone else that might be interested:

I’ve included VOR/DME stations in the flight plan for beacon tracking if desired, with the airfields at each end the closest current active runway to now defunct grass landing fields that the service used nearly 100 years ago. (Marina Field in San Francisco is now a public park, and Roosevelt Field in Long Island is now a shopping center).

If you end up flying the route, or finding any of the concrete arrow markers in the sim, be sure to share some screenshots here!

Thank you, I’ve downloaded the flight plan. That was a brilliant idea

I’ve been looking for something different - I think I might give that a go. I saw those concrete arrows on a repeat of the UK program ‘QI’ last night and momentarily thought about making a mod or POI list of it but it maybe that they’re still reasonably visible in places (?): Arrows Across America- concrete arrows

I did my own version of this on the last FS version (did not save it, just eyeballed it based on map in Leary’s book “Aerial Pioneers”. Going to give this a shot (once I figure where to install it). I am somewhat surprised that none of the third party ad on makers have done any of the old mail routes (US, Brit., French). It would be a nice little package…period aircraft and the routes involved. I have read a couple books on those early routes and those pilots wrote the book on how to make aviation work. Thanks for posting this.

Leary’s “Aerial Pioneers” is the one I remember as best,
Hilts/Lipsner “Airmail Jennies to jets” is a memoir by the first US Operations manager, and Johnson “Taking Flight” covers that period as well.
One of Lindbergh’s books includes coverage of flying air mail back in the day and van der Linden Airlines and Air mail.
There is a Brit. account by a former Air Minister late 1920’s but cant think of the name. Also, St Exupery has a fictionalized account of his experience as a pilot for Aeropostale…I think “Night Flight”
Interesting thing about the last one is he has a character that is based on someone he knew and it is surprisingly similar to the guy that ram-rodded the US air mail in the 20’s (Otto Praeger(sp)?)
Oh yeah, and Smiths “by the seat of my pants” memoir of a guy flew US mail in 20’s is a good read…mail run is about a third of the book I think.