The fact this very random update has had so many issues and we have gotten nothing but radio silence for ms/Asobo tells me somebody screwed up very very bad and they don’t want to come out and admit it.

And what makes that worse for me is that that is a very childish action - IMHO MS/Asobo would have scored more kudos if they just fessed-up and admitted it was a mistake if it was or it was an emergency update if it was deliberate.

Saying nothing and hoping it will all wash away is immature and for any business very bad practice.

Unfortunately this is very common in the business word. Somebody in the company makes a huge mistake and it’s kept under raps

I’ll second this. Usually I sit, rather smugly, thinking what’s every body moaning about, I never have and CTD

? But not this time. Flights in the A320 of over 1.5 hours and I’m regularly CTDing on touch down. Now I notice the few addons I have were also updated shortly after this update so possibly linked to those. Anyhow, I’ve now uninstalled them and gradually retesting to see if I can pinpoint issue.

I’m on an Xbox Series X and I’ve noticed periodic, several second pauses. I can hear the engine, but the aircraft just pauses and then continues. [I’ve also seen this pause while panning around]. I’ve restarted both the Xbox and sim several times, deleted and reenabled my rolling cache, but nothing seems to “fix” the problem. When 1.23.13.0 came out, I wasn’t seeing any issues, so I’m not certain if my pauses are related to the update.

Because the Xbox users are currently on 1.23.13 so it would be nice that they recognize Xbox users.
As of note, I don’t see any live user traffic any more. Anyone else notice this? Are we cut off from seeing PC users?
I wonder what the next update will jump to and will we be the same as PC users or is this the start of segregation?
Looking like we are not so much one platform.

I have to say I’m enjoying this thread but it seems (obviously) we’ve come to the point of beating a dead horse continuously. We’ve said our speak and gotten no response.

What does that tell you…?

We aren’t gonna get a response !

IMO, I think we should shift the thread over to helping each other trying to alleviate some of the SU8 symptoms (and we are), and support each other and offer moral support or a shoulder to cry on because our SIM keeps letting us down. lol

It seems we are going around in circles.

I’m including a pic of my new separate living room set up away from my PC desk. 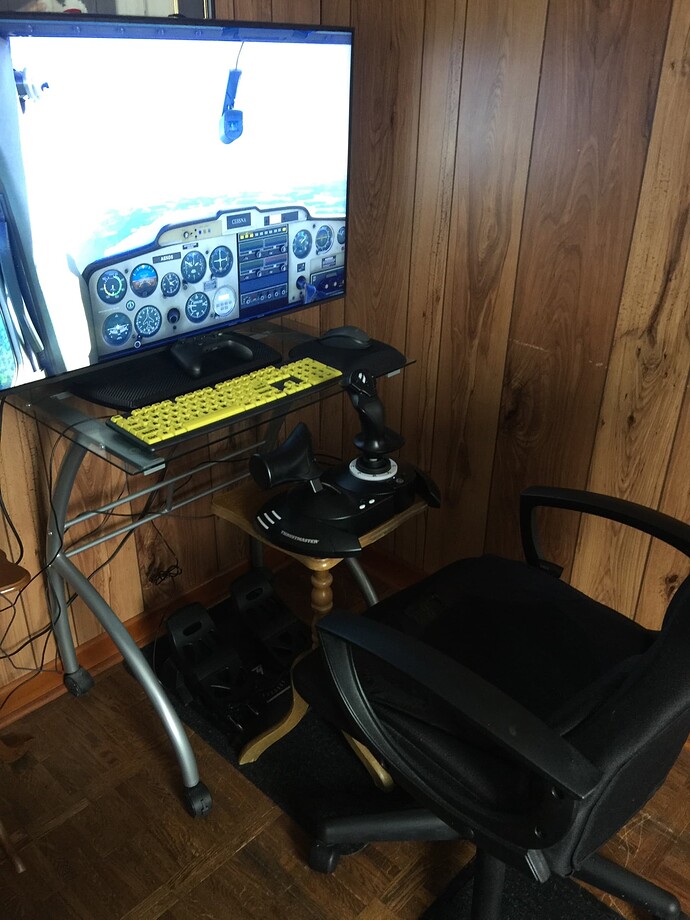 I still have 1.23.12.0 even after the Update and I’m on XBox. I do see other traffic: while flying or on the World Map. Don’t know if they are from both PC and XBox or XBox only.

I do see other traffic: while flying or on the World Map. Don’t know if they are from both PC and XBox or XBox only.

All depends weather you have live traffic turned on or just Ai traffic which is randomly generated. Never used nametags nor Live traffic so I couldn’t tell you either how to know who’s who and who’s using what. Is that a feature of the SIM I don’t know about…?

If nothing else, it’s been nice to see Xbox users banding together and there has been some chat with supporting each other.

It’s clear that MS/Asobo are not going to acknowledge this patch even though we are clearly on a different software release than PC users, they are sticking with silence. I think the silence has made it clear that we will get zero support as Xbox users, only seen as additional revenue and given a very limited amount of resources to keep the revenue stream running.
So, yes we have probably beaten this horse enough as it’s become clear we are only speaking to ourselves and we might as well get used to communicating amongst ourselves.
I do enjoying using this sim, hope that continues down the road but any expectations I had with being seen as an equal partner/ user with the PC side has eroded. That has also opened up the dialogue and a need of a separate website/forum for MSFS Xbox users.

Support works both ways. They want to essentially use the paying public as beta testers/debuggers, they want to know about these problems when they arise etc, but they’re not prepared to be transparent and advise regarding the content of a fairly large update. There will be no support forthcoming from me personally whilst this ignorance on their part continues.

If i was getting 3 CTD per session, I would have given up and binned it long ago. I have had 2 CTD in 3 months now, daily usage pretty much. I don’t tolerate crashing at all in software, never have.

I don’t tolerate crashing at all in software, never have.

Agreed. Present company included. I abhor having fun then suddenly something goes wrong due to manufacturer flaws or lack of Q&C. Especially when “WE” the consumer are at the receiving end of it. If I pay for something I expect it to work flawlessly and without issue unquestionably. I’ve only had (1) CTD the other night since using this SIM.

I’ve had something really weird lately. On the world map where you choose your flight and plane, everything just freezes up. It can take three or four minutes to get anything to move or a boot of the Xbox. This never happened until this mystery update.
Also kinda strange. If I choose an airport that was part of the WU updates, when I hit fly it boots up fairly quickly. Choosing any other airport I get a blacked out screen for a minute, followed by a long load time.

Within the game, you’ll see version 12. Outside the game in the Xbox menu it will show version 13.

part of the WU updates

I’ve read in these forums more than once that the WU’s and SU8 are suspect. But most guys had issues after “just” the WU’s…? I don’t have any WU’s installed.

The more the lack of support and silence continues, The more i’m being driven away from buying anything from the sim’s marketplace, I’m sorry but if I can’t be shown respect as a paying customer, I see no reason but to stop buying add-ons, its off putting and its basic respect which is not being shown by the developers in which communication is a vital part of the process getting this sim on track to a great future. Its such ashame because I see people trying to help and using their time to uncover bugs and testing solutions and this is what we get? Silence? We aren’t paid to do this nor do we have to be here, we do it because we want our favourite piece of software to succeed. That’s my 5 pence.

I seem to recall MS/Asobo talking at length about the SU8 before it was released.

Are you missing anything that was promised to come with that update? No new prop modeling, for example?

I mean, I get that XBOX got updated twice, but is there anything in the latest update that implies it is anything BUT SU8?

If so, I am struggling to see it.

And I am 99.99% convinced the latest update is in fact the SU8 which MS/Asobo was ANYTHING but silent about in the lead up to release.

Most of the conspiratorial theories stemming from this thread are built upon the assumption that the latest update is anything but SU8, but I am just not seeing it in the game itself. Am I missing something?

I’m talking about the 7GB update we got.