The P-51D ManO’War is completely unflyable for me. Upon reaching takeoff speed, the aircraft’s leftward veering becomes uncorrectable, while simultaneously being too “slow” for takeoff. Trying to force the aircraft into the air with a full pitch-up will only make it flop back down to the surface. Upon miraculously getting airborne, the plane will begin to automatically roll to either side. This rolling motion is not easily correctible, as the ailerons are hyper-sensitive to inputs. Too much roll on one side will cause the aircraft to begin rolling at a hyper-fast rate, which leads to the plane spinning out of control. 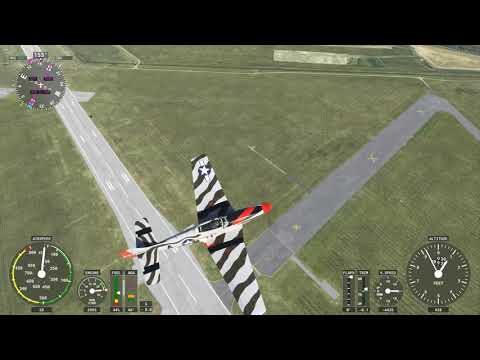 Steps taken that lead to this bug happening: Free flight choosing runway 35L as departure on a free-flight at Ellington Field, Houston. Using the ManO’War P-51D purchased directly from the marketplace.

Something I learned flying the A2A P-51D in P3D: don’t use full throttle. Hold the brakes until about 30”MAP and the gradually increase to 44.5”MAP by the end of the takeoff run. It’s helped with at least a couple of the P-51s for me so far. Also, hold right rudder even with the trim in and slightly pull back on the stick and slight right aileron. Give it a try and see if it works

A touch of nose down elevator during your take off run gets the tail off the ground and then you have more rudder authority.

Big engine tail traggers have a lot of torque, managing the yaw and roll caused by this Is part of flying them.

I fly from Ellington too, have experienced the exact same problem. It’s also on the new jet released for Reno Air Races. When I play the air races it works fine, but inside the world it acts the same way as the p51 but much worse.

For me, I noticed that the control sensitivities seem to be very touchy now for the stick, not sure if this is the same issue. This is happening on default planes that I’ve flown many hours with. They are much more sensitive now. I’m going to try resetting my sensitivities when I get a chance.

I tried the same thing, helps a little but not much.

That wacky flipping and rolling at the end of the video doesn’t look like anything that should be possible through any sort of control input or power settings. It looks like the flight model has just gone off the rails and is outputting nonsense.

Is it me, or does it seem there are more problems not after this update?

It’s not just you.

Exactly! There’s something wrong with the programming of this aircraft!

Is it me or is the rudder not animated? During that take off I don’t see the rudder move at all

(I do see the tail clip into the runway though…too much back stick too early and for too long there, need to get the tail up)

For me, all jets and p-51s have same problem except P51 Mrs Virginia.

Having the same issue with all of the P-51s. Really unfortunate… hope to see it resolved soon.

Hate to state the obvious, but you guys verified you’re on the Modern flight model in the settings? I’ve heard reports that it can get switched during a sim update, so you might want to change anyway. I noticed a bunch of my settings were changed by SU7: assists were set to Easy, and the culling setting in Graphics was set to Medium from Ultra.

Modern flight model helps a bit but not with all planes from Reno DLC.

I’m glad you stated the obvious, because I had no idea to change it back to modern. Now everything is working! Big thanks!!

Modern flight model should always be used for all planes unless they are a port over from FSX (if you read the explanation text in options it explains the only circumstances in which Legacy flight model should be used). So modern is the correct flight model for any plane that Asobo are providing and pretty much every other plane too.

Just tested the P-51A for the first time today. Having similar issues. One thing I noticed from the external view is that if I apply full left or right rudder and hold it there, the rudder recenters itself on the plane over the duration of about 2 seconds despite holding full input.

I have made sure all assists are off, and that the modern flight model is selected.

I was also getting some perculiar throttle jittering.

A fix is definitely required here.