I am basically satisfied with the flight simulator, but I am probably reaching the performance limit. I don’t want to mess with the game’s graphics settings. I think I have a powerful computer, but I’m not sure where I’m bottlenecked or where I can squeeze out some more FPS.

Here are my specs:

I achieve between 18 and 25 fps in the cockpit, and only a little more from the outside. I don’t have any traffic, but when i connect to Vatsim, the fps drop again.

I’ve seen users get 50-60 fps on Ultra settings.
What do you think, what can i do to get some more fps? New graphics card (3090)? The CPU? Or what do you recommend me?
I have already tried all the tweaks like NDU registry change, rolling cache and whatever else is available.

Thanks for your input!

The 3090 is just too powerful even for 4k. All you can really do is push every graphics orientated setting as high as possible and lower T-LOD and traffic until you get stable. You could also try creating a custom 6 or 8k desktop in NVCP or as many have done, either VR or you can invest in second and third monitors.

There must be something wrong with ur settings…
normally you should get 40-55 fps on the ground. A 3090 will not give you more fps because on the ground you’re CPU limited and your GPU can’t utilize 100%.

All settings between high / ultra with low traffic settings and a 2560x1440p resolution.

Something seems wrong with your performance/settings.
I have 11900K and RTX3080 and getting
30-60fps Ultra settings in 3840x1600 resolution.
What are your Lod-setting?
Try Lod-setting at maximum 200.

The stats shown by the dev tool say that your GPU would give you 50-54 fps but you are badly limited by the CPU. This is not normal, you should get at least 10 more fps with your config.

Thanks to everybodys Input!
For now i have set my LOD to 350 and when i switched to 150 it gives me around 5 fps but the buildings are like cones and i am not very happy with it!
So after your feedback i think about upgrading my CPU or i‘m totally wrong with my thought?

Normally I’d say yes upgrade the cpu but as your are already OC’d to 5GHz you should research carefully as I’m sure you wouldn’t be happy if an expensive upgrade gave you no real gain in performance.

Thanks for your Input!
So what i will do: i will check with lower resolution and ig i‘m not happy with it i will have to invest in an new CPU!
Thank you and i keep you informed what i decided!

I can tell you now that a lower resolution is unlikely to be of help unless you have VR or a multimonitor set up. If you are in the beta a simple test would be DLSS.

Okey i will test and report it tomorrow! Thank you!

Have you tried DX12 in the beta? Most people, me included, have found it works much better than the original implementation, and helps to spread the load among the CPU cores better, thereby giving a smoother sim with better FPS.

Also, have you tried disabling hyperthreading in the BIOS? Since MSFS won’t utilise all your cores and threads, focussing on the main cores seems to also make it run a bit better.

Yes i have tried DX12 but i didn’t saw an advantage. Will try to disable hyperthreading in my BIOS. If i don’t see an advantage i will try with a new CPU.
Thanks for the Input!

Well i disabled Hyperthreading and that is what i got: 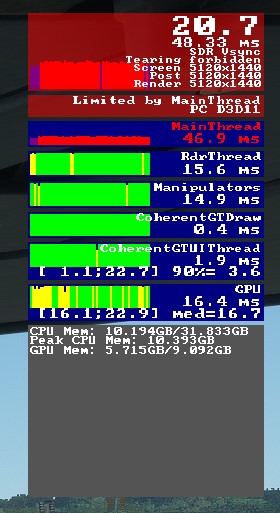 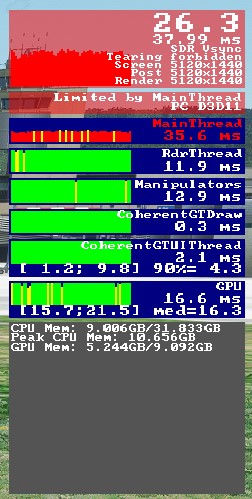 And when i switched to DX12 i got 9 FPS with my System. I spendet hours trying different settings and for now i really think i need some hardware upgrade (CPU)!?!?

I don’t want to play MSFS with 60 fps but stable 30 on ultra, fenix and on vatsim would be great…

It looks like turning HT off doesn’t help so your only real options are to lower lods and traffic as well as reducing any addons and background processes. Of course you could underclock your gpu but then what’s the point in having it?

Judging by your screenshots, your CPU is getting hammered and that’s the source of your poor performance. I’m not surprised you’re getting worse performance with DX12, as that usually puts more emphasis on multithreading and the 11900k is quite poor when it comes to multithreading. It does have a high single-core boost frequency, which might be why DX11 is your sweet spot.

Unfortunately, you are stuck in a difficult place with the 11th gen, as the only upgrade path to 12th gen for you involves at least new motherboard. Contrary to what another user said, I would not lower your resolution to 1080p as this usually puts a higher load on the CPU. As you’ve seen, lowering the terrain LOD to 200 or below helps. However, you might need to go below 200 to get the performance you want.

Wish I had the money is what I think

Just one tip that I think should still apply is to get 2 sticks of bigger ram rather than 4 smaller and make sure they go in the favoured slots.

The 13th gen Raptor Lake is rumored to be out by the end of the year if you want to wait. It’ll be the same socket as the 12th gen. If you want to save money, you can also pickup a heavily discounted 12th gen once the 13th gen is released.

Your mainthread is getting hammered, so something is still not right.
I noticed you mentioned earlier that the buildings didn’t look good with LOD reduced. This sounds a bit strange, as reducing the sliders should just make them look a bit less finely detailed, and have simpler shadows etc. Is the PC hardwired to your router, and is it getting enough data? The cone shaped or melting buildings indicates either your internet connection is not keeping up or possibly that the LOD is still too high, and the CPU therefore can’t keep up.

If the issue persists and it isn’t hardware, then I’d suggest reducing both LOD and TLOD sliders to about 130-140 and seeing how it looks then. Try using the NY discovery flight with photogrammetry on, live weather and traffic off, and make small changes.

As per your OP, you might well be correct and you’re reaching the limits, but it would be a lot more enjoyable if you can find settings that give you an easy 30fps +.