Very little to no AI traffic

I recently changed some settings and ended up reverting back to what I had before but now II don’t get any AI traffic. Maybe a few AI planes here or there when using online traffic but when I go to AI offline and set to 100%, there are zero planes. I did try using the liveries megapack to replace AI paint, would that be a reason as to why?

It would be if you made errors in manually altering the config files. Just try restoring the backups you made before you edited them.

All it takes is the mis numbering of liveries or a space where there should be a . or a , or something like that. I had to restore numerous backups in FSX after making such elemantary mistakes.

What likely happened is you edited a bunch of files pre-patch to make this janky AI traffic with liveries workaround functional. After that patch, something somewhere got reverted or changed, either conflicting with the other changes made or making that workaround no longer functional and breaking your traffic in the process.

This is why I don’t mess around with core sim files. It potentially leaves you 1 update away from prolems like this.

Hopefully you manage to get things working again.

So the only thing I did was drag and drop texture files to replace the default ones. I didn’t mess with any config files or anything else. And this was all done post patch.

You overwrote core sim files with 3rd party files. Same thing, really. Don’t think there’s an easy fix for that I can think of offhand.

Same here and I have zero addons/mods, just a default install. I was messing with the settings yesterday…tried everything from 100% traffic to ‘live’ traffic…still only had a few GA planes on the ramp, hardly any airliners…so I am following this thread.

Oddly, I’m seeing way more live traffic since the update. To test the patch I did my normal benchmark flight across Florida. Despite being a ridiculously busy airspace IRL, I’m lucky to ever see more than a handful of planes when flying over the Everglades, and rarely more than 1 or 2 at a time. This was what I was greeted to.

And subsequent flights have all shown far more AI planes than I’ve ever seen. 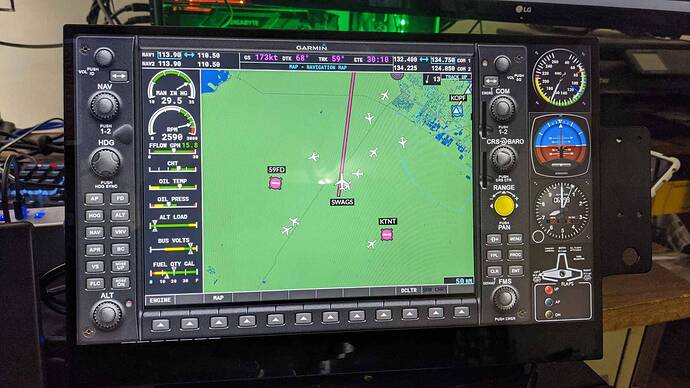 That said, we all know how inconsistent the MSFS experience is from person to person. This may not be a case of messed up files after all, but rather just another sim glitch.

So I ended up just deleting the A320 file and redownload it from MSFS to start over fresh, still no AI traffic even though it shows on the world map… It had to be something when I changed settings and then went back that it didn’t like or something.

I did just notice something. I only see like one AI at a time and when it touches down and stops, it disappears.