I wouldn’t go for the 11900K if I weren’t updating the Mobo to a Z590 along with it. It’s quite a noticeable difference. I’m coming from a 10700K which is only 8 cores as well, but since this rig is primarily for FS with a few other single-thread-hungry games, I’m happy having only 8 cores. The ~20% higher IPC has really helped. My 1% lows are generally within 5 FPS or so – which means less stuttering. Single core performance is all sim’s really care about. I’d rather have fewer cores doing more work, than more cores not doing anything. We’ll see what happens when DX12 is introduced.

I’ve done the Sydney test like 50 times now lol. What I’ve noticed is for the first 5-10 seconds, the FPS start off at an average of 45. After that, they stabilize at 55 fluctuating up to 61, but no lower than 54. The interesting thing to me is the 1% lows average between 41 and 47, occasionally going to 36. But it feels incredibly smooth. I mean, if my FPS counter wasn’t on, I’d think it was a solid 60.

The radical solution to stuttering : V-sync 30 fps.Smooth as silk.

Sure that video shows a decrease. The other shows an increase. 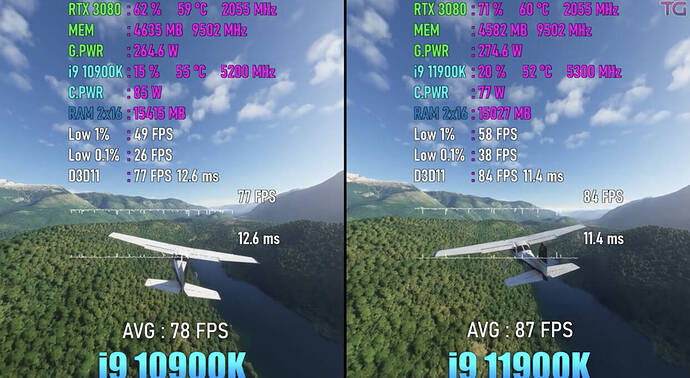 The overall average of published tests shows a 16% improvement in average FPS in Flight Simulator.

The overall average of published tests shows a 16% improvement in average FPS in Flight Simulator.

lol, it seems like you have a personal issue with the 11900k, like it’s never offered to pay for dinner or something. I am a bit bias having spent nearly $1000 for a CPU and MOBO upgrade, but in my eyes it’s been worth it. It’s been really nice being able to just fly and now worry about stuttering and low FPS at critical times during flight.

It’s really not a downgrade. If anything, it’d be a lateral move (though it’s not) for things outside of flight sim. For the sim, it’s a solid chip. Easy to overclock, fair temps and voltages. In my extreme stress testing situations, FPS never go below 30…ever. If anything, I’m GPU limited with the 3090. That said, this chip needs to be paired up with a strong GPU. But even when I’m CPU limited (GPU running below 99%) the chip does its job very well and can deliver higher than 30FPS in the most CPU taxing situations. This is with every setting on ultra and LODs at 200.

It’s the reviews. This generation was a flop. How come they release an i7-11700K that gets beaten by the 10700K in almost everything? That’s just embarrassing. They should just scrape it.

I’m just saying because maybe some people will skip the 11th generation but the i5.

I can’t speak for the 11th generation as a whole, but the 11900K specifically is very good for the sim.

Sorry if these look a little washed out, using HDR, but you’ll get the point. this is as CPU limited as I can get with what’s available. 3440x1440

That’s great. I know everything about Sydney aswell

The reviews also often seem to be assuming you would be upgrading from a 10900K and are interested in multithread heavy video processing etc.

In the more realistic scenario of upgrading from a 5th to 8th gen i7 to an i9 for gaming use the 11900 starts to make more sense even outside the MSFS use case.

Would it help if I agree it’s “a flop?” Here on the MSFS forum I’m interested primarily in how it performs in one game in particular. Not the review headlines.

It doesn’t matter to me that I’m “losing” two severely-underutilized cores. I’m not emotionally attached to them.

I’m interested primarily in how it performs in one game in particular. Not the review headlines.

Lol, I just showed a review where the 11900K is losing to the 10900K in Microsoft Flight Simulator. What else can I say…

Okay I guess that doesn’t help. To repeat, I agree that one test shows a decrease in performance. The average of tests shows a 16% increase. And I acknowledge the 11900k has 8 cores instead of 10.

I agree that one test shows a decrease in performance.

That was the test you were looking for. So now we are back to general testings? I don’t get it, and I agree that we’re getting anywhere, but I’m not writing for you in particular, but other people that are seeing this thread to think twice and do their homework, because to lose two ‘cylinders’ for nothing just because it is the next gen is no fun, that’s for sure.

Well I did some more tinkering in the BIOS and it’s running much cooler at 5.3. Still think I’m going to get a new thermal paste and may look into delidding. This chip can run pretty hot, and I’m on a 360 mm AIO. I got the load temps back to 67 with occasional peaks of 72. I’ve noticed with the lower voltage and temps, I’ve gained an average of 2-3 FPS consistently.

As for the Sydney test, I’ve tried cranking it up and using the orbx cityscape and flytampa YSSY. The weird thing is, even with the 3090 I’m crazy GPU limited. If I drop the game resolution to near nothing, being CPU limited brings the framerate to the mid 70s.