Hi, I tried a search before this and didn’t find anything, so if I missed it, apologies in advance.

I am having a hard time configuring my PTT button in vPilot and my Apha properly. In vPilot, it’s easy enough (trying to configure joystick button 1 on the backside of the left handle). Select it and I exit vPilot. It works to TX comms, but it also moves the camera to whatever setting is in the default profile. I tried going into the MSFS settings for Controls and did a search for Joystick 1 and it came up and I unassigned, validated, saved and exited. Back into the sim., load up vPilot and hit the button. Still whips the view around to the back while simultaneously TX the comms.

I don’t know what else to try. Can anyone help? I also tried the joystick 13 button (the white button next to the hat switch), but it stayed depressed and VATSIM got mad at me (VATSIM scares the ■■■■ out of me and so far I have only done 2 mic checks; but I apologized to Chicago Approach and then came straight here.

It’s likely mapped to more than one control… there are separate settings for the Cockpit Camera, External Camera, and Drone Camera… so you might go back in to the config tool, set the criteria on the left to “Assigned” then “Expand All” so that you can see all he possible locations that button one was assigned (you might have to scroll a few times and push the button). I learned this when I set up one of these for my camera controls: 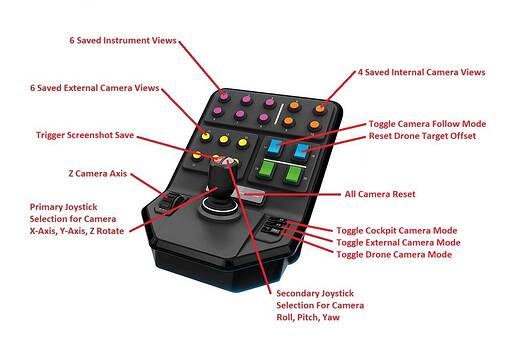 For example, that big grey button above labeled “All Camera Reset” has three different mappings.

I have my PTT mapped to the big red button on the right hand side of the Alpha Yoke, but I use Voice Attack for that.

I don’t know how to thank you @JimSim831. It was driving me crazy and clearly was not going to work in the run if I crashed because I was looking at the back seat every time I tried to communicate with ATC. The expand all did not work, but if I went through all the categories you were right, there also was an external camera view reset mapped that I needed to unassign. Now it seems to work well. TY again.

One last question. Do I really need to change the sound settings in MSFS to zero in order to hear the VATSIM controllers? So far I only hear them when I do that. Thanks.

Sorry, I’m not familiar with VATSIM. It might have its own settings, but…

If you are using a headset, there is a setting in “General” and “Sound” that says something like, “Communications” or something similar. This setting will allow sounds like the ATC come through your headset only, but sounds like the Music, and Engine noise from outside the aircraft, etc… come through your speakers. If I were at my Simulator instead of at work, I could be more precise in my description. I’m just thinking out loud here. Perhaps someone with actual VATSIM experience has a better answer.

Glad I could help with the Yoke mapping though.

You do not need to change the FS volume settings, however, when you dial your radio to ATIS you will get both the Vpilot Vatsim ATIS and FS ATIS. So, it’s best to turn off the volume in FS. In VPilot you can configure the Vatsim audio to come through your headset or computer speakers, (or HD TV for that matter).

Nice panel, how would one get one of those?

Strangely enough, it’s Logitech’s Farm Sim Side Panel (AKA Heavy Equipment Panel).
$149 well spent. I have some detail in a thread here:

Okay, I checked the search tool and couldn’t find any info. I’m wondering (because I can get my hands on one pretty cheap) if this Logitech Farm Simulator Panel can be used in Microsoft Flight Simulator 2020, perhaps in place of the X-Box Controller to operate the drone cam? Anyone with any experience in this? [Farm Sim Panel] Map a few saved views to the buttons, etc… Just thinkin’ out loud. Jim-Sim

Thank you, appreciate it

When I went to the other thread re the farm panel I saw that you were getting the Bravo. Did it ever come and if so are you happy with with it? I have been on the waiting list at Adorama for some time and don’t have any hope it’s coming in stock soon. Cannot bring myself to pay 2.5x on EBay. I love my Alpha yoke and am most interested in the trim wheel part of it actually. Sadly, I’ve become comfortable enough with the F2 and F3 keys for throttle though I’m sure if I ever get my hands on one, the throttle levers will be a huge improvement. I’m only flying the 152 and 172 right now because I’m relatively new to flying.

@dsweingard,
Yes, I was one of the first to pre-order my Bravo Throttle direct from Honeycomb, and it arrived a couple weeks ago. Unboxing was uneventful, but then I had already seen several unboxings on YouTube. I plugged it in and MSFS found the device. The default profile that MSFS provided was pitiful. The throttles were mapped backwards (engine one was engine two, and vice-versa), the Prop and Mixture was also backwards. On first operation, the LED’s were non functional. We were told by Honeycomb that this would be addressed in the recent update from Microsobo… it was not.

Instead, I found a driver on the Aerosoft website that applies for the Bravo unit… even though the Honeycomb website says there is no driver needed. That driver, once installed, apparently loads automatically for those who purchased their MSFS software through Steam, but since I bought through the Microsoft Store, I have to kick it off manually each time I fly. Again… this should be addressed by Honeycomb and Microsoft eventually… someday… hopefully. It does work however, as long as I remember to fire off the third party driver manually.

Because the Throttle unit also uses switches, where buttons are expected… it will also cause the now famous 100+ and 1000+ unit problem. The workaround for that is to disable over half of the functionality of both the Alpha and Bravo devices. So much for that “Partner Relationship” the two have.

To answer your question directly, yeah… I’m happy with the Bravo Throttle, once I got it dialed in.
The Trim Wheel specifically is awesome. With respect to the Auto Pilot buttons and dials… I think I still prefer my Logitech Multi-Panel. Mostly because of the displays and the larger (readable in a dark cockpit) backlit text and buttons. The Trim Wheel and the Gear Lever on the Bravo are better than the equivalent on the Logitech. The Logitech does however have a large switch for the Auto Throttle functionality which many aircraft have (such as the Cessna Longitude that I’m growing to love).

I know I sound a bit frustrated by my Alpha and Bravo purchases, but honestly, they are both the best devices in their class and price point. 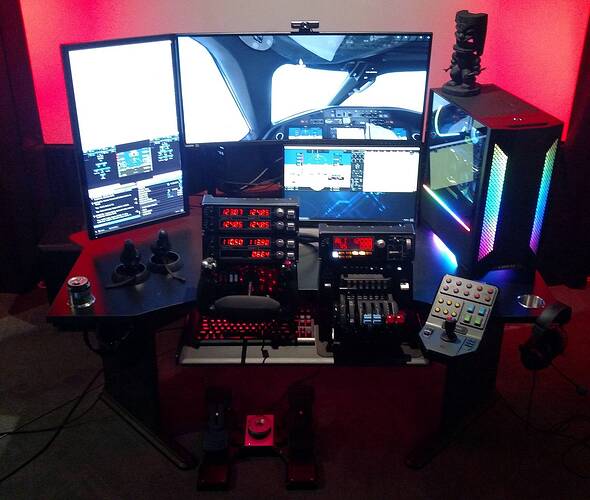 Wow. That’s quite the setup. Very helpful information. Thank you. I’m very happy with the Alpha yoke, except for the annoying weirdness when I look left with the hat (which is really only a 4 way hat for me in the mostly default profile). Quality is good and it’s made a huge difference for me and I even like the switches. Which is why I’m jonesing for the Bravo but your review is sort of less than super positive. Sounds frustrating at best. I “take” lessons from Forder Learn to Fly, which I watch on Twitch and now on MSFS Official now that he is teaching Jayne. He basically has drilled into me that trim is key and I just cannot do it well with the hydraulic switches on the yoke. He has an old Saitek trim wheel which is like a museum piece and no longe made anymore so the Bravo trim wheel is the key reason I am interested. The AP buttons/switches would be nice too, but the throttles are less relevant to me as I am just learning in the 152 and 172 Skyhawk (G1000).

I watch a fair amount of jet streamers but that is almost as intimidating as trying to VFR on Vatsim. Not sure I have the patience to learn the FMS and MCDU. So I expect to move up to twin engine props but not sure the throttle part is that relevant.

Maybe the positive of being back ordered is that they might work out the kinks and driver issues. Not holding out a lot of hope for early January. But your review definitely helped me NOT scratch the itch to pay $500 on eBay for one. I can definitely wait. Thanks for the thoughtful reply.

But your review definitely helped me NOT scratch the itch to pay $500 on eBay for one. I can definitely wait.

My words of advice… wait it out. You’ll be very happy with your purchase.
Don’t patronize the scalpers… the product will be exactly the same, except you will have allowed them to take some of that happiness away.

The trim wheel alone is worth the price of the Bravo. I think you will also be surprised how much you will grow to appreciate the throttle levers. Even as you fly the simple 152 and 172 aircraft. My throttles are currently setup for twin engine flying and that works perfect, even in a single engine aircraft.

This is good advice, and worth elaborating on. Because of the “constant on” problem of some of the default switches on the Alpha Yoke, it is causing many inputs, such as Heading adjustments, Altitude adjustments, and other buttons and dials, including the Trim button to over-react. If you watch the trim wheel in the cockpit of, say, the 172… and you apply very quick pressure on the trim button, you can see the trim wheel move, usually in a small increment. But then if you hold pressure on the trim button, you’ll see it move slowly, and then take off like a buzz saw. The problem is… you don’t know which of those two speeds the trim is being applied when you just press it quickly. This problem will persist until MSFS gets their speed multiplier problem sorted out. The Bravo Trim Wheel does not suffer from this problem.

Okay, one more thing… (sorry for the multiple separate replies, but my mind is working in spurts this morning - Merry Christmas, by the way).

I’m not sure if you know this, but you can modify your hat switch to be more fluid movement, instead of the jerky, twitchy, look away and back again behavior.

This guy explains it well and would save me a lot of typing. 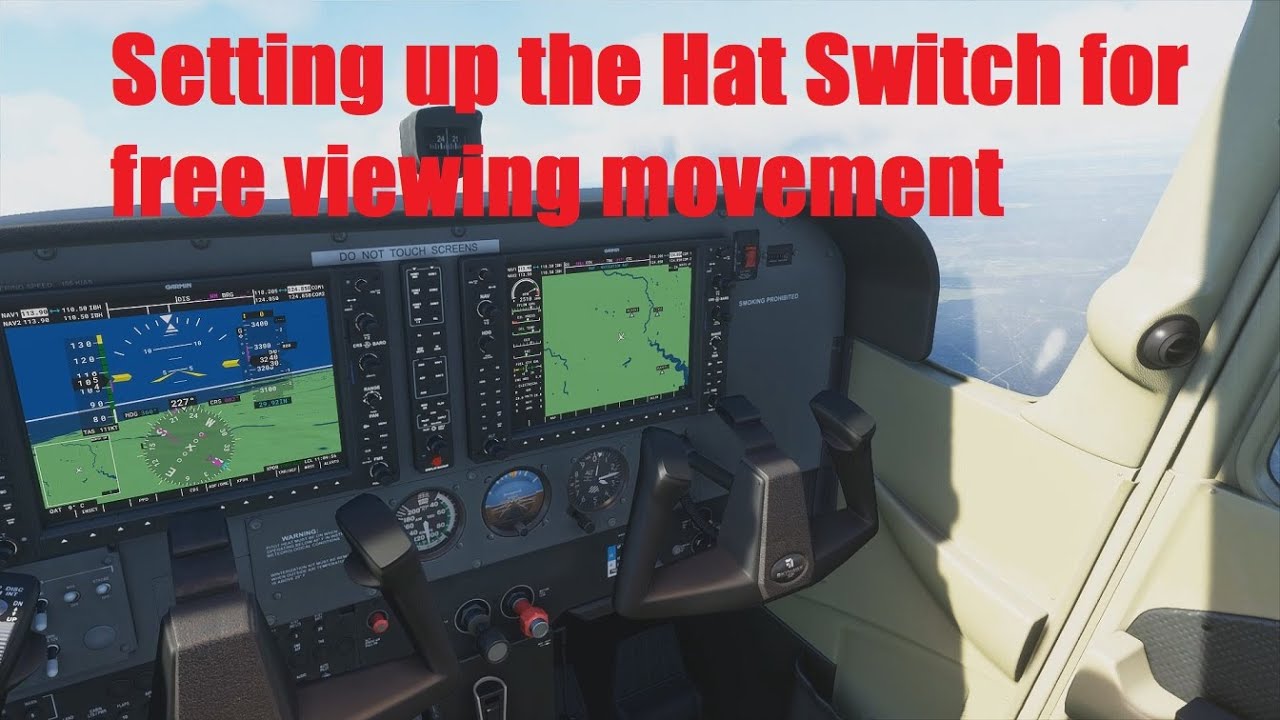 Life saver!!! Thank you. I’m watching that as soon as I finish watching the end of the Cannonball