The VR experience has never been better, imo. The performance improvements mean I can run at higher settings. As for pop-in sure if you’re focused on that you can see some but it’s minimal and most of the time I don’t notice it at all if I’m focused on my flight.

Obviously there is still room for improvement and optimizations but overall I’m really satisfied with the current state of VR.

I am running 152% SS / RS 100 on my Vive Pro which alleviates this AA in popups in VR considerably to the point I don’t notice it any more. It was very bad at 100% though.

Yeah I can’t go that high with my Reverb G2, otherwise my GPU would hand in its resignation notice

How do you enable terrain pre-caching in VR?

I’m having a similar very good experience overall. I am running 10850k, 3090 and 32gb RAM and Quest 2 at resolution 2688*2784, 100 render scale in game and settings high or ultra. I have also put the terrain precache to On and LODs to 300% in the config file, which shows buildings almost as far as the eye can see. With this I am getting 20-30fps depending on location, which is flyable for me.

I note that even at these settings the sim only consumes 7-9gb of my 24gbp VRAM - it is possible to increase this by upping the LODs even further but the framerate becomes unplayable. So I think a 3080 still remains the better investment over the 3090!

Main SU5 VR bugs remaining:
-Shimmering on some buildings (Asobo unable to reproduce, see other threads)
-Aliasing on overlay windows (Asobo working on fix)
-Water reflections broken
-Overall too bright/washed out (brightness slider hopefully coming)
-Some runway objects like taxi signs popping in at close range
-Artifacts on horizon above clouds when flying high altitude
-Some checkerboarding/frustrum culling on head turn at airports or over sea

The graphics pre-cache slider is indeed only for 2D, but it’s been confirmed that in the userconfig. file there is a setting for this in VR as well, it just didn’t make it’s way to the on-screen menu in the VR graphics area…so some users have changed the setting in that userconfig. file from 0 to 1 to activate the new caching option and set it to ‘3’ to make it Ultra…I haven’t seen them report back yet on the in-sim results of this but it’s promising as a workaround. Also, the forum manager ack…

To clarify, in the file Usercfg.opt, find the GraphicsVR section and set the lines for OffscreenTerrainPrecaching to be:

See the other posts on the forum via search, but short answer is you use Notepad to edit the usercfg.opt file to turn on that feature and set it to Ultra. Very easy to do and it works well. When you open that file you scroll down and find that setting and put in a 1 to replace the 0 to activate the caching, then you set it to 3 from default 1 which means ultra as opposed to the default of medium. Save and close the file and relaunch the sim. This missing menu option will be added back in the upcoming hot fix announced yesterday as well.

I’ve used nothing but VR since February, and I can say that I’ve never had a better flying experience than now. No stutters, ATC altitude issue is fixed, and I’ve been able to crank up almost all of my settings to High or Ultra, so my view of the world is amazing.

Today I had the afternoon free and decided it was time to test the sim after the update.

For the first time since I’ve had it, the VR was just terrible - you can’t wish this kind of awful experience on anyone. I’d left my settings as after SU5 fix 18.50, when I abandoned it to wait for better updates and fixes. I used Quest 2 rather than my Index, and Air Link. fpsVR showed my GPU at 99% - well, have a look for yourself - the sim was literally jammed solid and unable to do much at all - though the guy was pushing me back, I couldn’t look around, I couldn’t activate anything in the cockpit (no switches working) etc etc: 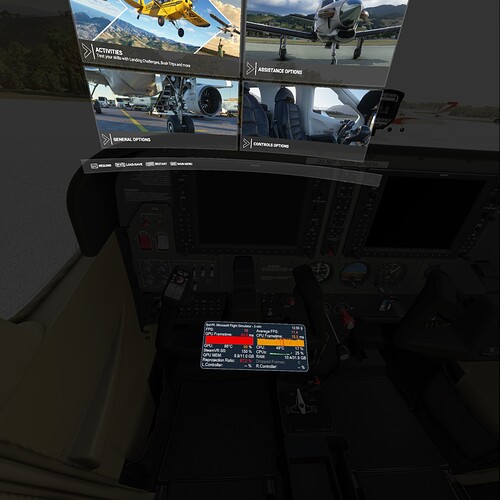 It was the worst I have ever had in any sim - with or without VR.

Now, the mantra has always been “start with everything on the lowest, and work your way up”, but I have never had to do that in any sim before - I decided to do it now, and boy am I glad I did!

Yes, it took a few hours - but the result is now I can enjoy the sim in VR again, with very good settings for a nice experience, even though I currently still have many options on “low” or “off”. I’ll see what I can get away with enabling later, but for now, it’s better than it’s been since after SU4.

I haven’t bothered tweaking any config files as yet, either, I only worked with what is within the in-sim settings. I did check that the user options file wasn’t still read-only, after having tweaked it to improve the LOD pop-in we had - this must have been replaced in the update, because it wasn’t read only and the settings had been “zeroed” as I had set them in the sim.

I set everything to LOW or OFF - and I mean everything. This is what it looked like: 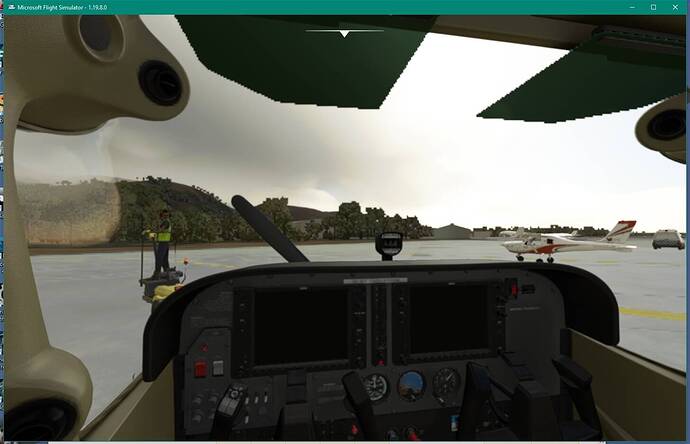 Funnily enough - with everything off and low, the flight physics and controller response were excellent. I actually flew around for a while, with just a blurry mess around me! I really enjoyed that, but of course, it couldn’t stay like that. Headaches and nausea would surely follow.

Anyway, as is the way, I changed just one thing at a time, just one step at a time, and took screenshots (which I renamed after each test flight to show what the settings had been) and scribbled down what I had changed and what the effect was in-sim. Took up half a notebook.

Anyway, you don’t need my life story - end result, it looks great again, and I can fly happy for the time being (until the next fine mess they get us into). The only thing I had to compromise on was the texture quality/size. In order to run at 150% render scale, with high object detail and TAA on, which is vital for vastly reducing the “sparklies” I had to reduce the texures to medium. On High, it was just a bit too much stutter, though it wasn’t that bad - I can imagine with something more complicated than the Cub I was testing in, it would only get worse.

So there ya go - reset and start from scratch. Make sure you have a couple of hours at least free, and try and enjoy it. Seriously, I rarely do this because I think it will be a chore - but it was actually quite fun, always flying a circuit at LGTL, Kasteli, to test the settings. Taking screenshots in the same place every time.

Another thing before I sign off - I noticed that the stutters/pausing that I have mentioned in other posts always happen at exactly the same locations in a flight. It isn’t “been flying for ‘n’ minutes = stutter/pause for a while”, it was “fly over x/y grid reference (maybe long/lat?) and it stutters/pauses”. If I avoided the place where the stutters had previously occurred, it didn’t happen. That I find very interesting.

This is my end result: 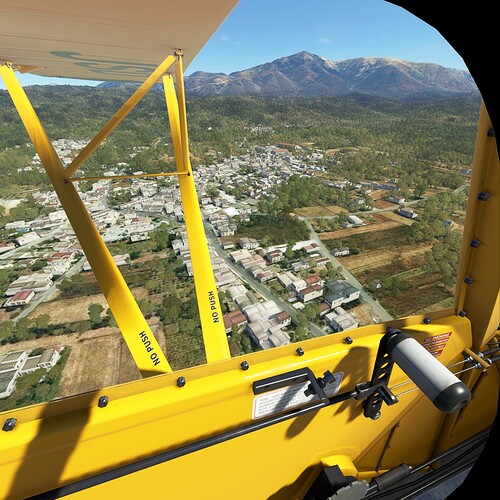 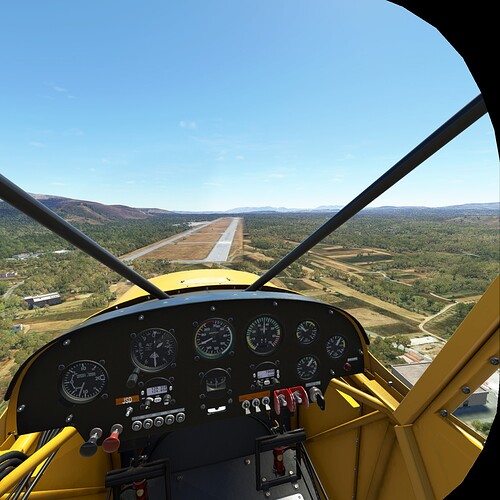 I don’t know the framerates, as fpsVR stopped displaying, but it was nice and smooth from start-up to landing.

I am very much disappointing with my VR experience. I have my LOD set at 200 and the trees and buildings are drawn up to about 1 to 2 miles away then just blurry textures. I have tried to edit the cfg with a bigger lod factor but it makes no difference, always the 1 to 2 mile limit and beyond that just blurriness. Monitor flying seems to be unaffected and I can change the lod radius but not in VR.

Hi
I had the same problem all I did was to rest the graphics setting to default then readjusted the settings.

Shockingly jumpy reflections since SU5 for me and many others.

New update started out a complete disaster! Just trying to get the update from the store was a treasure hunt. Only to discover we had to load the Xbox app first. After it all downloaded, I couldn’t get as far as a flight off the ground before my yoke, switch panels keyboard and mouse froze, all at different times. Then more CTD’s. I gave up.
Next day I changed aircraft from Modern to Legacy and now everything works, smooth no stutters and great fps! I did a few complete flights testing everything from weather to G1000 in C172. All very successful! I can’t believe my eyes it’s so amazing. From complete unflyable ■■■■ to brilliant, overnight?
So bizarre I don’t trust it lol!
(i7-10700, RTX3080, 32G, Q2-AirLink)

I’ll give that a go, Thank you.

Even the Sim Update 5 was a complete step backwards for me. It’s no different after Sim Update 6. Here are a few screenshots from Sim Update 4. Sorry for poor quality. These are screenshoots from vids that I made in VR. I miss the incredible cloud formations, the lighting, the colors. Since SIM update 5, the clouds really only look bad in VR. Magenta / green veil in the colors, no more mood. To be honest, I don’t feel like flying in the MSFS 2020 anymore …
10900k / RTX3090 / G2 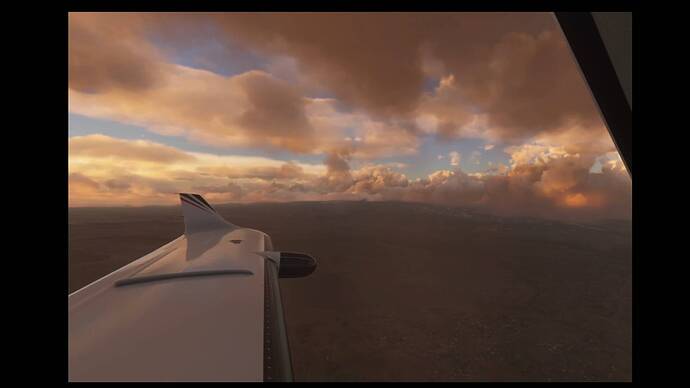 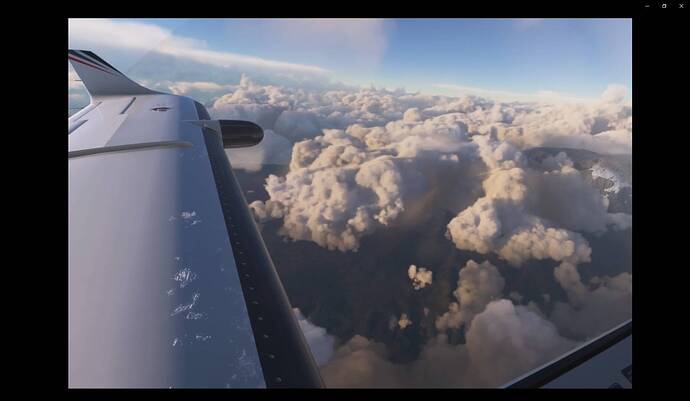 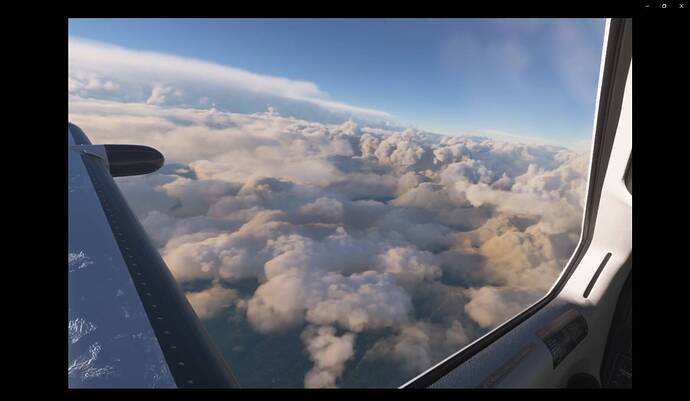 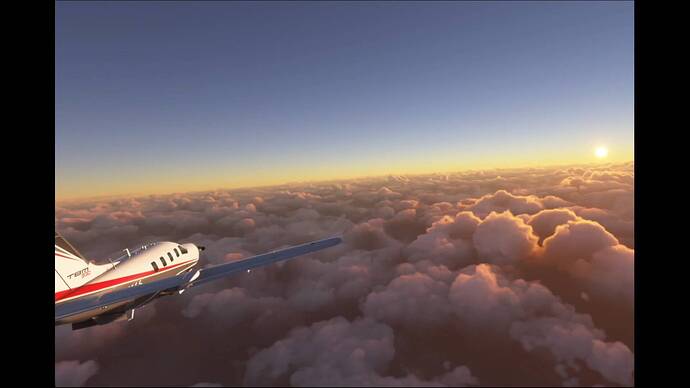 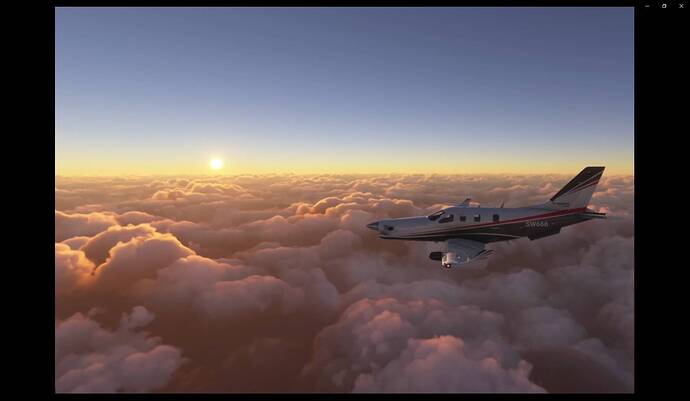 Have I problems with my eyes?

Just do the vercors discovery flight and hold left of the prominent mountain.

You will see nothing but a popup fest everywhere.

In urban areas as well as flat landscapes it works soso with the new culling setting set to 3 and terrain lod 3 or higher (there is still some backloading but it is much less noticeable now) but there are many many places where nothing has changed and we still have an very plastic planet.

I’ve long since put my Quest 2 headset down and stopped tearing my hair out when it comes to VR. As a few people have said on this forum over the last 9 months the VR implementation in the sim was cobbled together very quickly in the closing few months of last year by Asobo and is not well optimised.

If they’re going to publish a VR roadmap soon and show it some love then I’ll come back to it then and see how things have changed. In the mean time I’m going to invest in Track IR. It seems like a better compromise.

It’s no different after Sim Update 6.

World Update 6, we’ve not had SU6 yet

Ok, I have 3 different places for MSFS updates. Update in Steam, update during the start of MSFS and updates in the profile itself. You can get confused …

Just tried that flight, though I have flown there before without problems, but this time there was some minor pop-ups, but hardly enough to call objectionable or immersion destroying for me. Of course this sort of thing is always going to be in the eye of the observer and what some find objectionable others won’t worry too much - and maybe our different systems might make a difference, as well as how our ISPs manage their traffic.