Ok guys, i’m pretty sure everytbody is testing the VR mode those who own a vr headset.

Wich is your firsts impressions?

There’s an entire subforum for VR, you can find a lot of feedback there.

The visual quality was worse than I expected, but the feeling of immersion was WAY better than expected, I am pretty happy overall.
In the a320 and c152 and c172 I can read everything perfectly with my quest 2, in the 787 though I have a hard time reading even the speed and altitude.

Btw now I get why people wanted to use the vr controlers to press buttons, ■■■■ it feels as if you are inside the cockpit, you feel the urge to touch it xD

As this thread now is in the VR forum, i’ll post here:

My impressions of the VR mode.

Verdict: I’m gonna stick with Aerofly FS2 in VR mode for a couple of months, and continue to use MSFS2020 with TrackIR at least until i buy an i9 with 3080 or similar - or optimization gets better, which i expect.

Overall very very good, easily as usable for me as XP11’s VR. I play on lowest settings even without VR and I’m using a DK2 so I can’t really comment on graphical fidelity.

Observations:
The VR mouse control feels difficult at times. Wish for VR controllers.
Missing a VR zoom (but might be the VR focus function, will check)
VR reset needs to be pre-assigned to a key by default so that users do not get locked in the menu. Or a bsck/cancel button.
Many default head positions inside aircraft cockpits need to be reviewed and adjusted for users not to be half outside the window (checked default camera H- V-position settings to 50%).

Just amazing! A short trip over the Grand Canyon in VR. 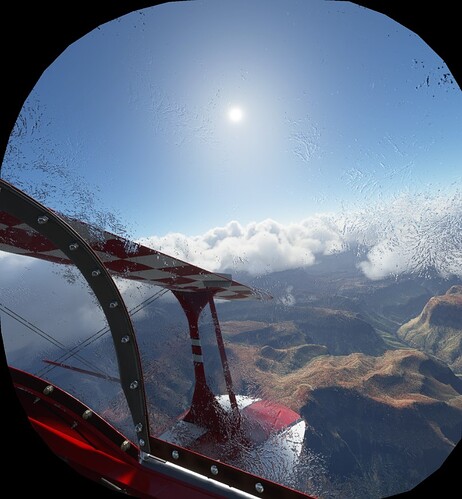 I’m a VR vet I don’t get motion sickness anymore and this thing has me having to take off the headset after a few minutes.

Glad I waited to try it on GamePass and held off on purchase.

Hot garbage that is what it is. I have followed everything possible workaround and still cannot get the window asking me to reset my view to go away. I still am ontop of my plane when I switch to VR AND the keybinds dont work once I enter VR. Its like the game freezes and no response.

So awful is what I rate it at this point. NEVER have I had this much trouble getting VR to work with a program.

Wow terrible choppy performance. I mean I only have a 2080ti, 32 Gigs of Ram and a i9 9900x but sheesh, choppy even at low Rez. O well. I had a feeling. Hopefully with time it will be optimized.

I just returned from my first A320 VR flight in MSFS: EDDH - EDDK, “live”-wx.
Besides the obvious quirks with the A320 and the resolution that needs more tuning by me, I had the feeling of sitting in my office! Flying this plane IRL “feels” almost the same and I can´t wait for the next 2-3 gens of VR headsets and GPUs so I can work from home!
The immersion is good and the rest (systems, resolution, microstudders, etc) is just a question of time.

Graphics look worse than what I was hoping for, but the immersion is making up for that.

Fun things to do:
While in flight walk back inside the Citation then stick your head through the roof.
Or while on ground step out of the plane.

You’ll agree that cables are always too short.

After spending some time looking through the new VR threads on here while the update downloaded gave me pretty low expectations of how it would run for me, what with a Rift CV1, i7 9700K@4.8, 32GB RAM and a 1080ti. I was expecting stuttering, lag and nausea. Thankfully I ended up being very happily surprised.

Firstly, I was sat with my head just above the captain’s floor in the C208. Resetting the view made no difference, I had to go into the Oculus menu and recentre the view there, then do it back in the game. Bit of a faff. And I’ve only tried the Oculus debug setting change so far but I can’t get the black frame on the right to go away yet. I’d prefer it if the menus were closer, like in ETS2/ATS, as I found them hard to read with the Rift’s resolution.

But once I was in the seat (and realised I couldn’t read the ATC or camera panels as the text doesn’t resize) and I took off from Jacksons PNG it was WAY better than I was expecting. Using the default VR graphics settings it was smooth as, no stuttering and after flying around for 5 minutes thinking ‘this is amazing’, no nausea. The descent and landing was so much more intuitive in VR, one of my best landings. The yokes don’t move though and can’t be removed (maybe to reduce the performance hit?).

It’s very hard to use my throttle quadrant and button box so will stick to TrackIR mostly, but It’s very cool and the feeling of immersion is excellent. Thanks team

EDIT: Enabled Oculus Beta as described by others and the menu panels are correct (closer) now as is my position in the plane. And the black frame is gone. Stunning.

I agree with your first point! Performance has been great for me.

I am using the game from Tenerife with virtual desktop but my PC is in Madrid (away for Xmas), I expected all that to add a lot of lag and I also was expecting low fps from what people had said.
However, I am getting around 40 fps, 25ish around New York, which is great given my settings are in medium-ultra

The best thing in vr is how much improved landing is. I feel like oh thats why it was so hard to do proper landings. (Oculus RiFT S)

CV1 user here with low expectations for my first run.

Cut the in game resolution from 90 to 60%, and some other settings lower than the default VR preset.

The resolution was of course really poor but the immersion is so high sitting in the cockpit.

I was giggling like a little girl at the take off, and sat with a big smile on my face when I climbed above the tree tops around the airfield.

The CV1 does some heavy lifting with its ASW but my system was quite steadily producing frames for me. 45 FPS stable most of the time which was upcycled to 90Hz in the headset.

All in all a very impressive start to MSFS VR and further optimizations from Asobo along with me buying new gear will make this a true VR nirvana!

I was pleasantly surprised; compared to all the hours of tweaking required for VR to run decently in DCS World, MSFS2020 just worked.

I’m enjoying the immersion, and the sim is pretty smooth at 80-90% resolution. Bumping up to 100% gives me much clearer displays in the a320Neo, at the cost of some black bars as my card struggles to render frames. I flew over Seattle and a rural area; definitely better performance in the middle of nowhere.

At times, clouds actually look like real life. Bloom is great and I found myself looking through the sun visor.

Overall: a good experience but I wish my rig was more powerful so I could fully drive my Reverb G2. It’s disappointing to know that the displays could be crystal clear and be unable to achieve it.

I did try to tweak the experimental settings in OpenXR and not sure if it made a difference. I’m also noticing the game bumps out of VR mode whenever the G2 controller falls asleep.